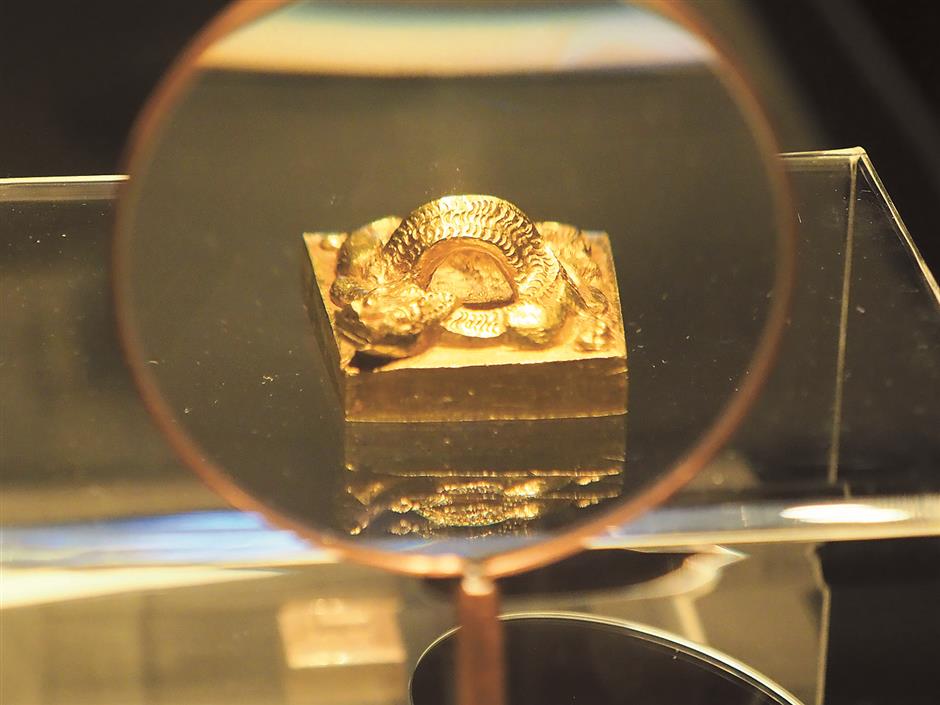 The largest Western Han Dynasty (206 BC-AD 25) golden seal was found in the tomb of the Nanyue King. The archeological site was situated in Guangzhou, Guangdong Province.

With roots dating back thousands of years, seals play a significant role in Chinese culture. Beyond a unique motif to mark documents and artworks, they are symbolic of status and identity.

The exact origin of Chinese seals is not known. They are believed to have originated in the Shang Dynasty (1600-1046 BC).

According to the book "Zuo Zhuan," an ancient Chinese narrative history, Chinese seals appeared as early as the Spring and Autumn Period (770-476 BC). The earliest seal unearthed in China was made in the Warring States Period (475-221 BC). At that time, seals were made and used privately.

Since the Qin Dynasty (221-206 BC), seals were used in the official sphere. Royal seals, which were exclusively used by imperial families and vassal kings, were termed "xi" in Chinese. Other seals were called "yin" or "zhang" in ancient times.

The size and material of a seal imply the social hierarchy of its owner. The bigger it is, the more powerful its owner. In terms of material, jade best embodied nobility, followed by gold, silver, copper and iron.

The shapes of their knobs also mattered, including dragons, tigers, camels, turtles and snakes. Even the length and color of ribbons attached to seals varied according to the status of their owners.

Empress Wu Zetian (AD 624-705) disliked the Chinese character "xi," as its pronunciation sounds like the character meaning death. Therefore, she changed the name of seals to "bao," literally meaning "treasure."

The largest Western Han Dynasty (206 BC-AD 25) golden seal was found in the tomb of the Nanyue King. The archeological site was situated in Guangzhou, Guangdong Province.

It is the resting place of Zhao Mo, the grandson of Zhao Tuo – a Qin Dynasty general who established the Nanyue Kingdom, which was a vassal domain affiliated to the Western Han Dynasty.

The tomb was discovered in 1983 by a group of workers. They found some orderly slab stones buried in the Xianggang Hill where they planned to build an apartment building.

Their discovery was reported to the local government and archeologists including Mai Yinghao, who was director of the Guangzhou Museum and later led the excavation of the king's mausoleum.

Regarded as one of the most important archeological discoveries of the 1980s in China, it is the largest intact tomb with the most valuable burial articles in southern China.

More than 1,000 cultural relics made of gold, silver, jade, bronze, bamboo, glass, pottery and lacquer were excavated from the colorful stone chamber.

Seen as a legitimizing device, the golden seal reading "wendi xingxi," the administrative seal of Emperor Wen, is the "crown jewel" of the artifacts.

It was placed on the body of Zhao Mo along with eight other seals – one made of gold, five of jade and two of turquoise.

Talking about Emperor Wen, the first person that people might come up with is Liu Heng, the fifth emperor of the Han Dynasty.

Liu's reign was marked by good governance and the peaceful consolidation of imperial power. He was known as one of the greatest Chinese emperors.

However, Emperor Wen mentioned on the golden seal doesn't refer to Liu but Zhao Mo – occupant of the Nanyue tomb. Zhao was also titled "wendi."

In the context of the Han Dynasty, "wendi" was Liu's posthumous honorific title, granted by the subsequent emperor after his death.

The system was different in the Nanyue State, in that the title of "wendi" was given by Zhao himself.

The four Chinese characters "wendi xingxi" were incised in xiaozhuan, or "small seal script," a calligraphy style in which all lines are of even thickness and curves and circles predominate. When the golden seal was unearthed, it still had traces of red ink paste, indicating it was practical rather than merely serving as a burial object.

Weighing 148.5 grams, the golden seal measures 3.1*3*1.8 centimeters. Its knob was designed in the shape of a curling dragon, symbolizing the imperial authority. It is the earliest Chinese seal with a dragon-shaped knob, and the only material evidence that has been discovered for the study of the seal system in the Qin and Han Dynasties.

The golden seal is displayed at the Museum of the Mausoleum of the Nanyue King in Guangzhou.