49-gram gown that can fit into a matchbox

Believe it or not, a gown made thousands of years ago in China weighs only 49 grams, which is equivalent to about two pairs of socks.

Measuring 132 centimeters in length, the gown was unearthed from the famous Mawangdui archeological site of the Western Han Dynasty (206 BC-AD 25). It was selected as one of the first-grade cultural relics by the government for its importance in the history of Chinese textiles.

Located in the eastern suburb of Changsha in Hunan Province, the archeological site dating back more than 2,000 years contained the remains of three people from the Changsha Kingdom – Li Cang, who was called the Marquis of Dai, his wife Xin Zhui and their son.

Consisting of two saddle-shaped hills, the site was excavated from 1972 to 1974. All three coffins were made of large cypress planks. The outer coffins were covered with layers of charcoal and white clay plaster, which helped protect the cultural relics and even the bodies.

More than 3,000 cultural relics were unearthed from the tombs, including lacquer wares, bo paintings, silk fabrics, Chinese medicinal herbs and musical instruments. Most are displayed at the Hunan Provincial Museum in Changsha.

The extremely light gown was found in the tomb of Xin along with her exceptionally well-preserved body. When archeologists opened her coffin, they were thrilled to find that her skin was soft and supple. Her muscles still allowed for her arms and legs to flex at the joints. All her organs, hair and even loops and whorls on her fingers and toes were intact. It is regarded as one of the best-preserved bodies in the world. 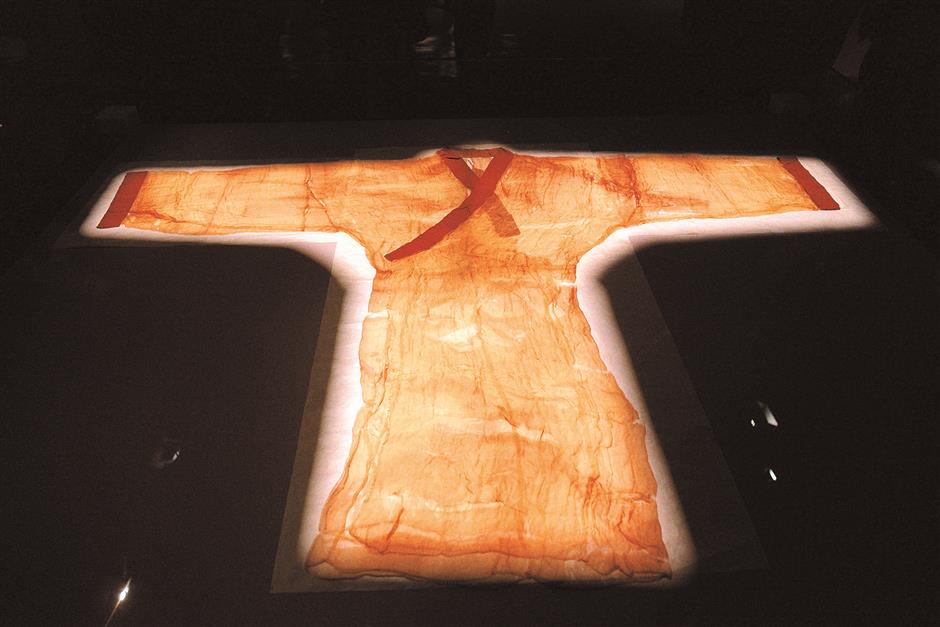 The extremely light gown unearthed from the Mawangdui archeological site is on display at the Hunan Provincial Museum.

According to the blood found in her veins, experts believe Xin had type A blood. Her stomach contained 138 melon seeds, which implies she probably died in the summer when the fruit was ripe. Moreover, the existence of seeds indicates that she died within two to three hours after eating the melon.

Pathologists discovered that Xin had suffered from a variety of parasitic infections, and died of coronary heart disease induced by biliary colic at the age of 50.

In addition to the well-preserved body, another astonishing discovery was a silk gauze garment, the lightest of its kind in the world. It is said the garment can be tucked into a matchbox.

Its silk gauze is a woven mesh of silk threads, incorporating the "leno" weave where the warp yarns are twisted together in pairs between the weft yarns. The fineness of the silk gauze is 58 to 64 warp yarns and 40 to 50 weft warps every centimeter.

The extremely fine gauze gown represented the supreme skill of silkworm breeding and weaving during the Western Han Dynasty.

The precious cultural relic once had a "sibling" that was even lighter, weighing 48g, but it was destroyed by a 17-year-old named Xu Fandi.

In the autumn of 1983, 11 years after the excavation of Mawangdui, Xu sneaked into the Hunan Provincial Museum late at night and stole 31 treasures unearthed from the archeological site. The museum staff didn't discover the items were missing until the next morning.

The police found that Xu climbed a bamboo ladder and broke the glass window on the north side of the exhibition hall to enter the museum. He then broke six glass cabinets and stole the artifacts, including three replica and four thread-bound books.

Xu was quickly apprehended. However, in order to cover up his son's crime, his mother burned four of the relics and flushed three pieces, including the 48g gauze gown, down a toilet. Fortunately, the 49g gown was recovered.

In order to better protect the fragile national treasure, experts from the Nanjing Yunjin Brocade Research Institute spent 20 years making a replica, which can be seen at the Hunan Provincial Museum. Its appearance, color, size and texture are all the same as the original, but it weighs 0.5g heavier.