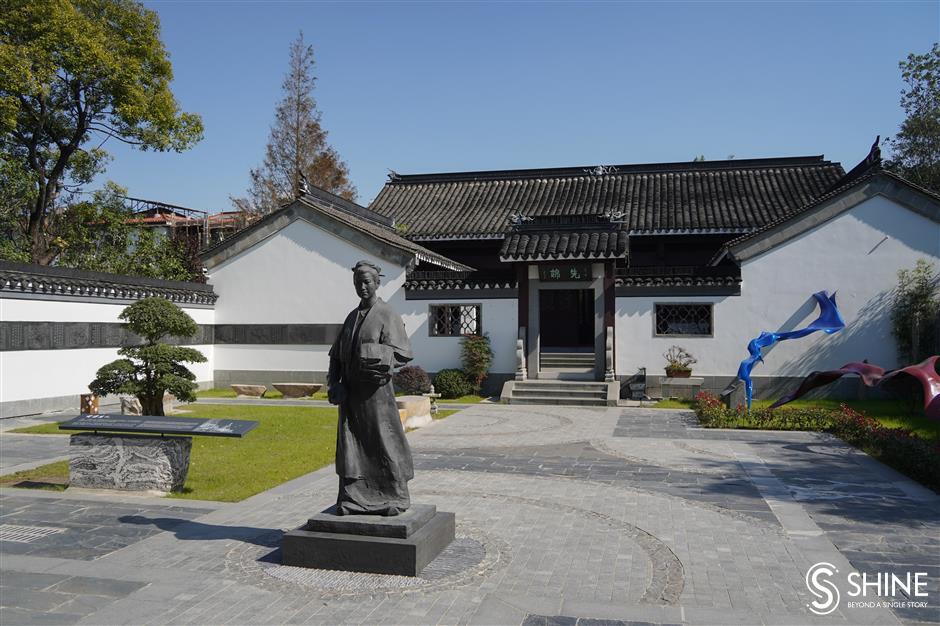 For decades, Kang Xinqin voluntarily swept the tomb of textile pioneer Huang Daopo every day in Xuhui District's Huajing Town as a way to show her respect. Kang, an inheritor of Wunijing cotton textile weaving technique, passed away last year, but her daughter Wang Meifang carries on her skills.

Wunijing is the ancient name of Huajing Town, Huang's hometown. She lived during the Yuan Dynasty (1279-1368), and is known as the mother of Chinese textile technology. Huang was a child bride who was mistreated by her in-laws, and finally fled her marital home and went to Hainan Province.

Hainan is an island that is home to the Li ethnic group. On the island, Huang learned weaving techniques and passed them on after returning to her hometown more than 30 years later.

The legendary weaver improved cotton weaving machinery. She converted the traditional spinning wheel into a new three-spindle cotton spinning frame. Her invention of cotton fluffers, pedal spinning wheels and looms contributed to a major leap forward for the development of the cotton textile craft in China.

Huang's weaving legacy was passed on from generation to generation in Shanghai, which eventually became a major Chinese textile producer. 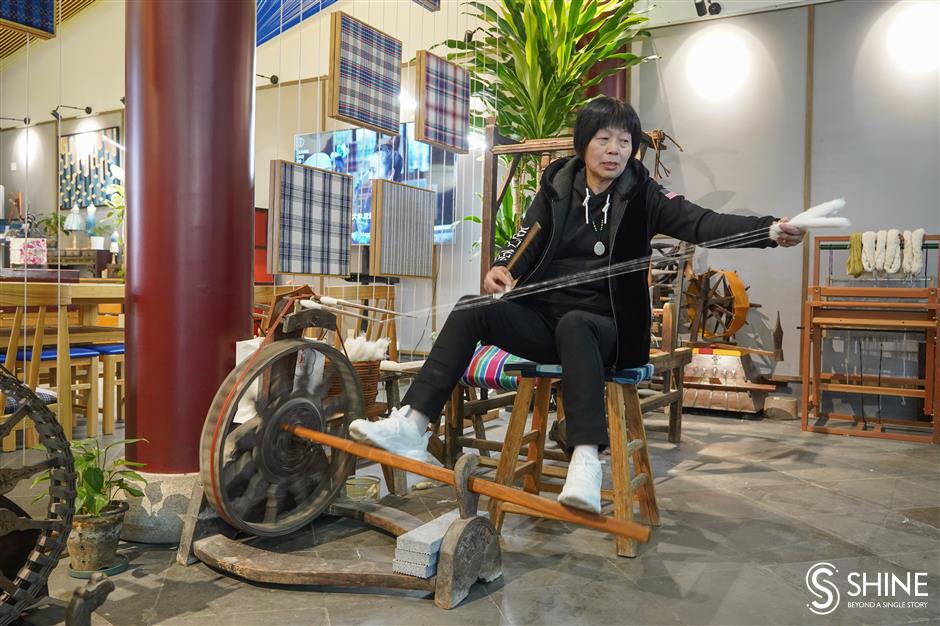 Wang Meifang, inheritor of Wunijing cotton textile weaving technique, shows how tension adjustments are crucial to spinning the yarn on a three-spindle wheel, showcased at the Huang Daopo Memorial Hall.

"When I was a child, almost every family in our town had a three-spindle spinning wheel," said Wang, who was born in 1962. "We grew cotton and made clothes by ourselves."

Wang is a native of Huajing, and her family lived near Huang's tomb. Like treating her own ancestor, Wang's mother Kang piously cleaned the tomb every day. Her story wasn't known to the public until 1987, when Huang's tomb was listed as the city's historical and cultural heritage.

In a previous interview, Kang said she considered herself a descendant of Huang, as the textile pioneer had no children. She felt that she had an obligation to sweep the tomb and pass on her cotton weaving techniques.

"I went to Huang's tomb to look around and clean up every day, rain or shine," Kang said. "If I don't go there, I feel there is something I haven't done, which makes me feel uncomfortable."

Kang learned weaving skills from her mother when she was 7 years old. At age 11, she mastered the entire cotton weaving process.

I met Wang at Huang Daopo Memorial Hall at 700 Xumei Road in Xuhui District. The museum, which reopened last year after a major renovation, displays the entire process of traditional cotton textile weaving. 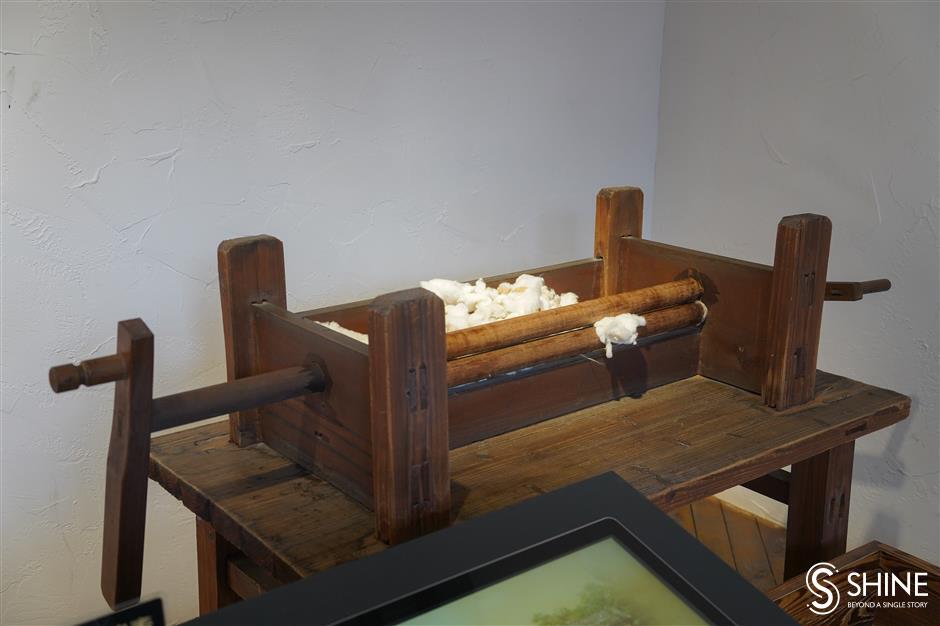 The first step is separating seeds from cotton fibers with the help of a wooden stirring machine, or cotton gin, invented by Huang. The invention of the cotton gin phased out the manual approach, and greatly improved the efficiency of textile making.

Huang's cotton gin came around 500 years earlier than Eli Whitney's, which was one of the key inventions of the Industrial Revolution.

The next step in the process is cotton fluffing by using a bow-like piece of equipment. Holding a big, bamboo fluffing bow and using a wooden hammer to strike the bow requires formidable arm strength. Therefore, this step is normally done by men, according to Wang.

"It is difficult to control the three yarns simultaneously, as their speeds are different," said Wang. "It is like three children running, one faster than the other two. I have to control their pace."

The other intricate steps include sizing, winding, dyeing and weaving. Black tea leaves, gardenia, turmeric and logwood are used to extract natural dyes. 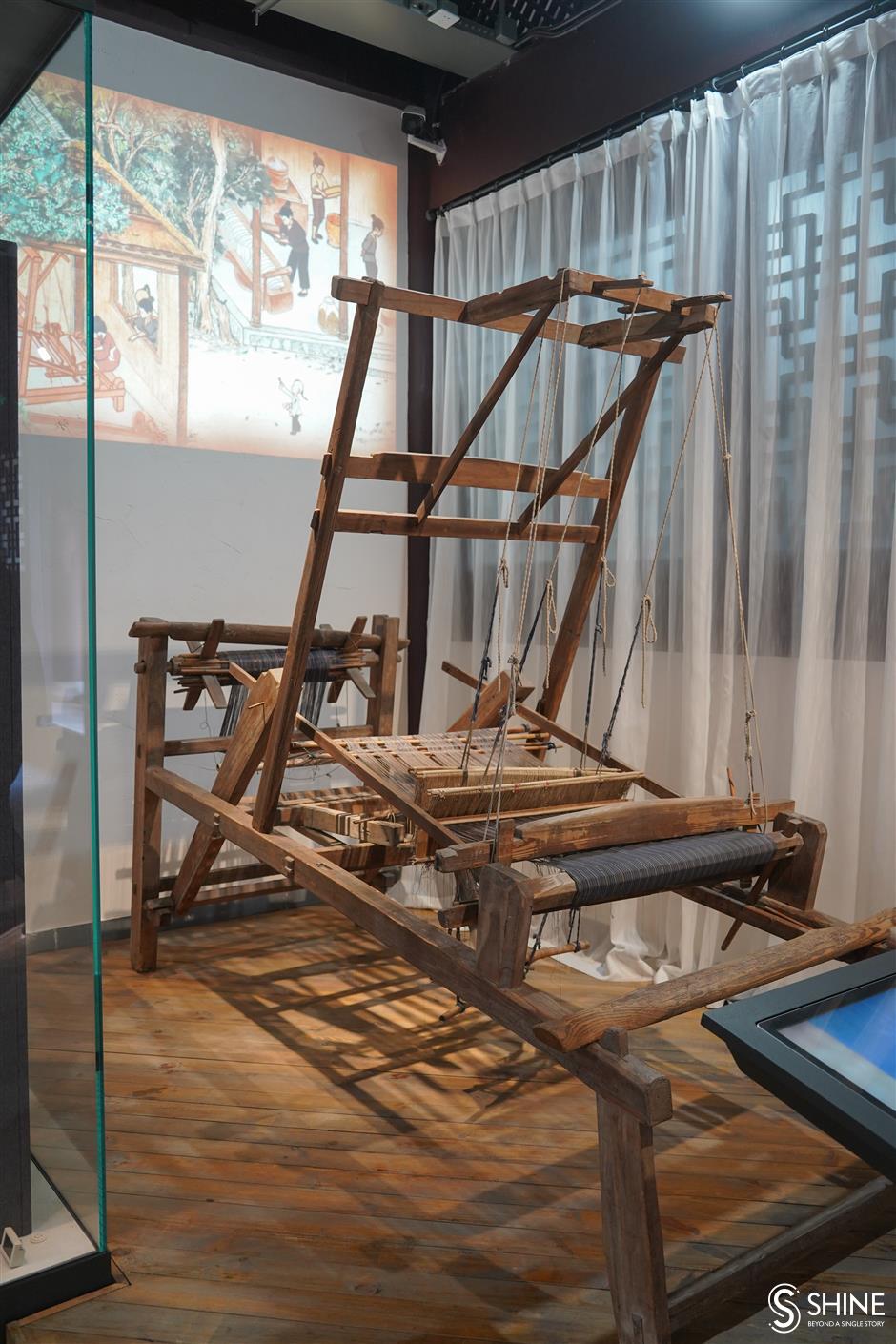 A traditional loom for homespun cloth

In Wunijing, there was a folk song that everybody knew:

Teach me spin and weave

With spindle and loom

Wang was able to sing the song when she was a little girl.

"On the rainy days when we couldn't do farm work in the fields, I would help my grandmother separate seeds from cotton fibers while my mother helped her spin and weave. We chitchatted while doing work. It's one of my happy childhood memories," Wang said.

She said the cotton-made homespun played a significant role in their lives. Apart from its practical function – being made into clothes – it also serves as a dowry. She remembered the era when the marriage of a Huajing daughter required parents to provide at least six bolts of homespun (traditionally 8 meters long by 60 centimeters each) in a dowry.

"It was impossible for a woman to get married without homespun at that time," said Wang. "Mothers began to weave the homespun for their daughters when they were young."

In order to preserve the traditional skill, Wang has been teaching spinning at Yuannan Middle School in Xuhui District once a week since 2013. Around 15 students in the 6th and 7th grades participate in the hobby group.

"The folk art used to be inherited by women, but now many male students would like to participate in it. They are also able to become inheritors of the Wunijing cotton textile weaving technique," said Wang.