The "verdant robe" in Peking Opera is often the leading female role, a virtuous lady of high social status, elegant and well-mannered. Think of Princess Odette in "Swan Lake."

The now superstar of the "verdant robe," Shi Yihong, was alerted, at age 10, by her teacher not to smile with her mouth open, even when she was off stage.

"You are going to play the 'verdant robe,' how can you smile in such a way?" asked the teacher, her words leaving an indelible mark and causing young Shi to start paying attention to her manners. 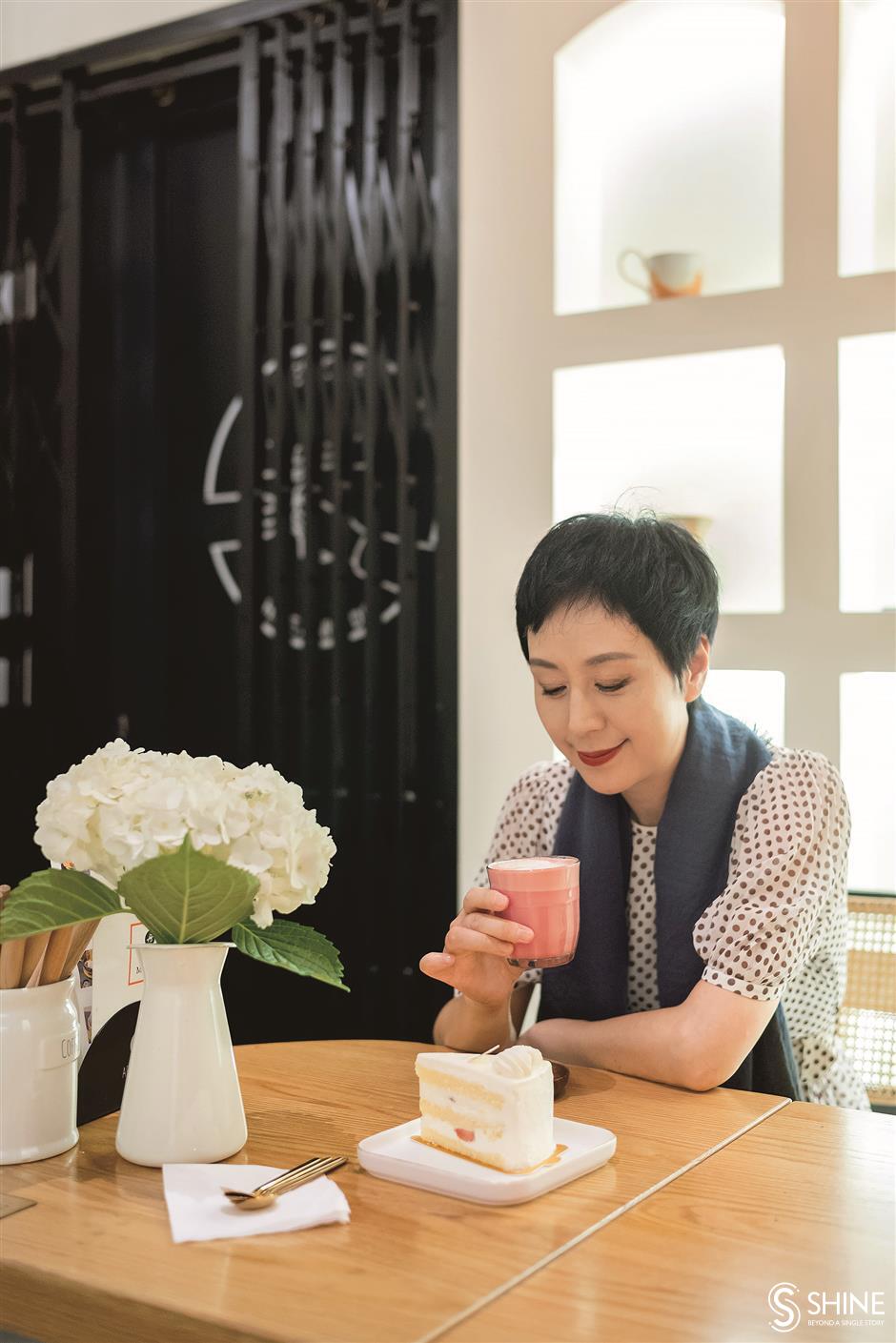 Traits of nearly 40 years of training and performance are obvious when Shi exquisitely holds her coffee cup and talks with Shanghai Daily, but her opening words are somewhat of a surprise.

The show has two lead female roles, neither fitting the traditional opera form's "verdant robe." One is a righteous female warrior disguised as a man and fighting alongside her lover to save two orphans. The other is a vibrant innkeeper in a remote desert who falls in love at first sight when the warrior's lover steps into the inn, and tries to seduce him.

Shi plays both roles and is also the producer of the show that was especially popular among younger audiences when it premiered in 2019. Breathing new life into a centuries-old art form was a challenge to audiences' existing sets of rules and traditional aesthetics, even for Shi, known as "the first lady of Chinese opera." 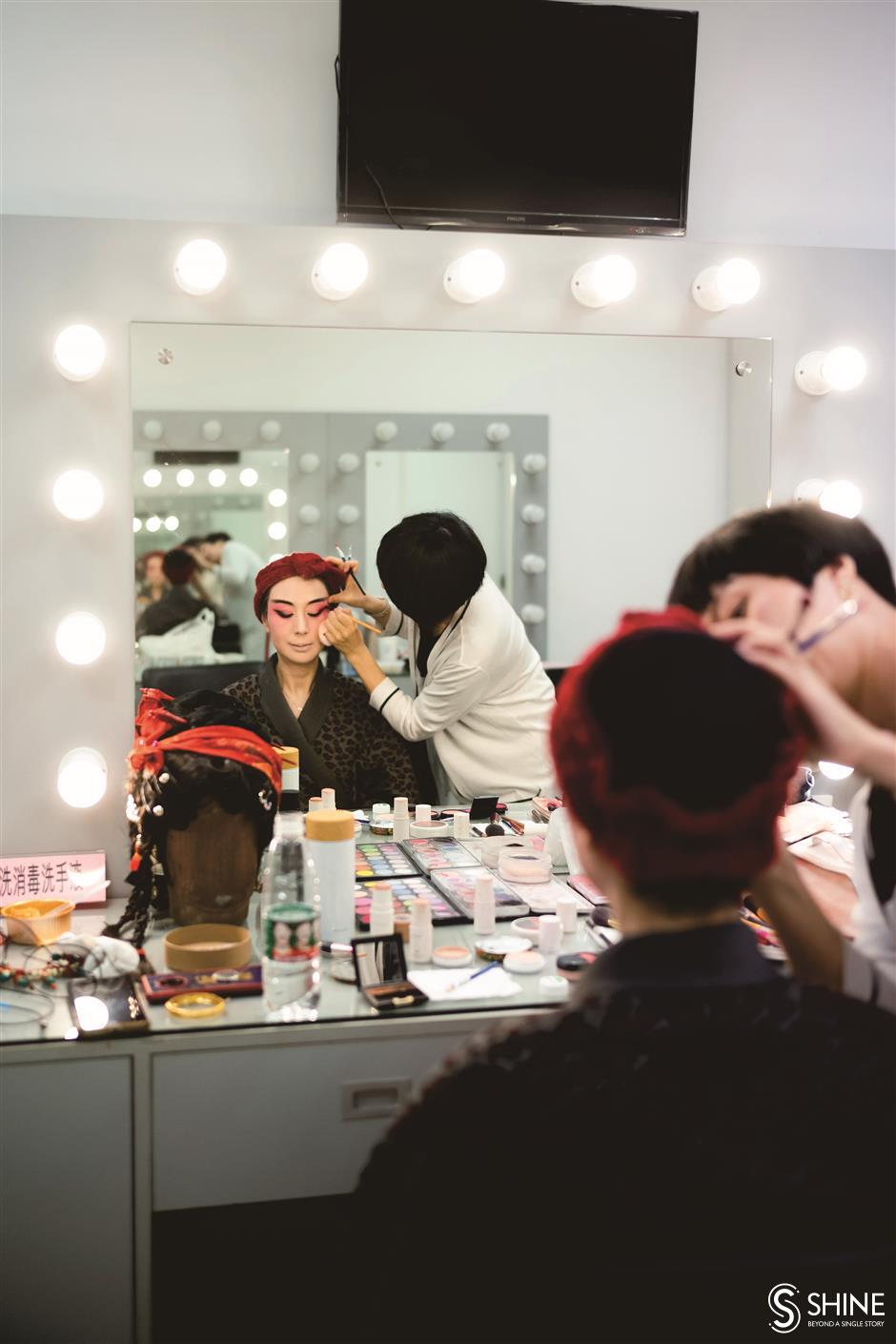 To her fans, she is the "super radiant and chic Sister Shi," a description so popular it became a top-click hashtag online. But even some of her loyal fans were not happy when hearing of her new challenge.

"Some of my fans told me that they would never want to see me playing the innkeeper Jade, because she's almost the opposite to the traditional 'verdant robe.' She's vibrant, sexy and determined to get the man when she has set her sights on him," Shi recalled, with an elegant smile and clearly unaffected by such comments.

"So be it. Jade was exactly the reason I wanted to have this show produced. We ought to revive traditional opera with new elements, otherwise it would just be left dying," she said.

"Jade is exactly the kind of woman that doesn't usually appear in orthodox Peking Opera repertoire. The traditional lead female roles, written decades ago, are often the virtuous women who obey their fathers, husbands and sons. That rarely resonates with audiences today."

Nine years ago, Shi had already challenged tradition by playing Chinese Esmeralda in the Peking Opera version of "The Hunchback of Notre Dame." She was ready for the new challenge and confident of the highly inclusive nature of her home city Shanghai, a thriving metropolis whose inhabitants have seen all kinds of experimental theater from around the world.

It was a Shanghai newspaper, Shin Pao, that first named this art form Peking Opera in 1876 when it introduced its readers to a performance from Beijing. It was also in this city that merchants and artists collaborated to build new types of Chinese opera theaters, with more delicate stages equipped with mis-en-scenes and some of the era's latest stage technologies. 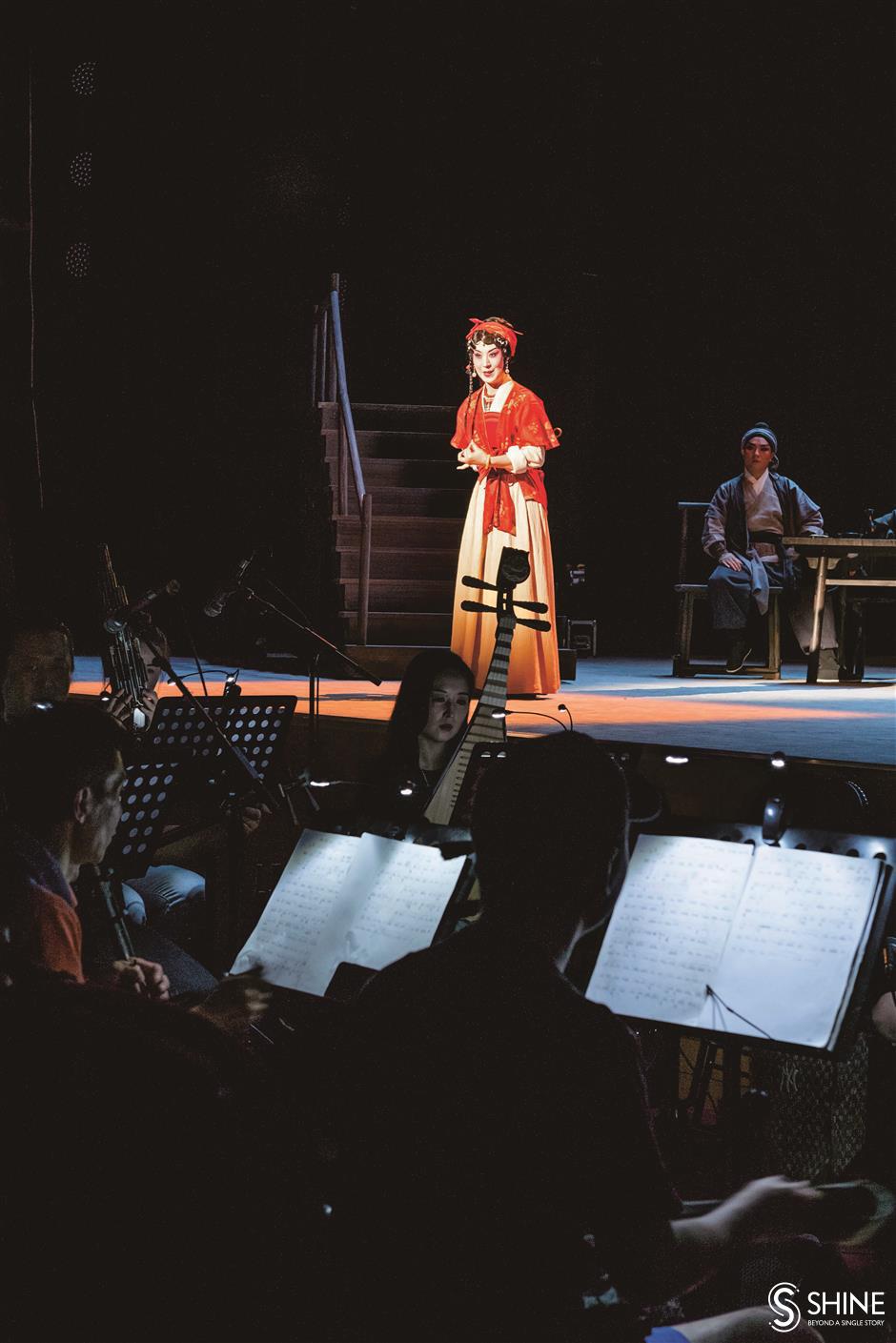 Shi plays the role of a vibrant innkeeper in the show "New Dragon Gate Inn."

The premiere of "New Dragon Gate Inn" in Shanghai turned out to be a big success and drew in many new audiences who watched a Peking Opera for the first time in subsequent performances. Shi soon received invitations to perform around the country.

The adaptation from a movie familiar to the younger generation made it easier for them to understand the plot and characters. The delicate lighting and mis-en-scene, in contrast with the traditional stage setting of just a table and a chair, highlighted Shi's specialty, the martial arts scenes.

She practiced gymnastics and martial arts before getting enrolled into Shanghai Traditional Opera School at age 10. Shi's class was the first to start taking lessons after the "cultural revolution" (1966-1976), she and her 49 classmates being selected from 3,000 applicants.

Due to her training in gymnastics and martial arts, Shi was first cast to play warriors and do lots of stunts, but was later reassigned to do "verdant robe" roles once the teachers discovered her singing talent.

She joined Shanghai Peking Opera Theater in 1990, and won the nation's two top theatrical prizes in her early 20s. But the traditional art form was in decline. Audience numbers dwindled, and it was almost impossible to attract young audiences. Most of her classmates left the stage.

Shi stayed put in the theater while starting to venture into other fields and gradually became the "crossover queen" she is known as today.

In 1999 and 2000, Shi worked with renowned composer Tan Dun in his multimedia symphony musicals "The Gate" and "2000 Today." She also took some film and TV roles.

But her deepest affection has always been saved for Peking Opera, and Shi gradually started her long journey to break boundaries and reinvent the traditional form to bring in more audiences.

The leading "verdant robe" roles often require both singing and stunts. Typical examples would be the female warrior Mu Guiying, a general's widow who leads the army against an invasion, or concubine Yu in "Farewell, My concubine" who commits suicide when the king is defeated and kills himself.

The 1993 film of the same name, which won the Palme d'Or prize at Cannes Film Festival, followed two male Peking Opera artists who specialize in this repertoire. Female roles used to be played mostly by male artists in early times, but that's no longer the case today.

In 2017, Shi and Shanghai Peking Opera Theater were invited to perform the repertoire at Metropolitan Museum of Art in New York and Princeton University. Tickets sold out quickly.

American audiences embraced the traditional Chinese opera in an intimate garden setting in the museum. Some were not familiar with the drums and beats of Peking Opera, which sounded louder in the intimate space.

Shi took notice and, on returning to Shanghai, evoked the idea of a version accompanied by chamber music.

"No boundaries can't be broken," she said.

"Loyal fans of traditional Peking Opera can always watch me performing in the traditional theater, but we ought to be brave and innovative to revive this art form to resonate with more audiences today."