When stepping into the exhibition "Shiota Chiharu: The Soul Trembles," most visitors will be dumbfounded by the first work they encounter on the first floor.

Small iron wire-made boats shuttle through the air in the main exhibition hall, with dense red threads gushing out, tangled, intertwined, broken off and unraveled. In fact, thread is a symbolic material in Chiharu's installations, as if she's painting in the space through the changing positions of thread. These lines gradually form a surface and then completely fill the entire space.

A 2019 traveling show of Chiharu's at Mori Art Museum in Tokyo, the exhibition currently running at the Long Museum West Bund features about 80 sets of works, ranging from her 1990s creations to recent pieces specially made for this exhibition.

Varying from sculptures, performance videos, photographs, drawings and materials related to her stage design projects, this is the largest exhibition dedicated solely to the Berlin-based artist ever held in China.

In fact, the red threads, reminiscent of the color of blood, represent the connection between people and reflect the artist's inner world.

"The only drive for me to live on is to make exhibitions," Chiharu said at the opening of the exhibition. "My life would be utterly meaningless if I didn't create art." 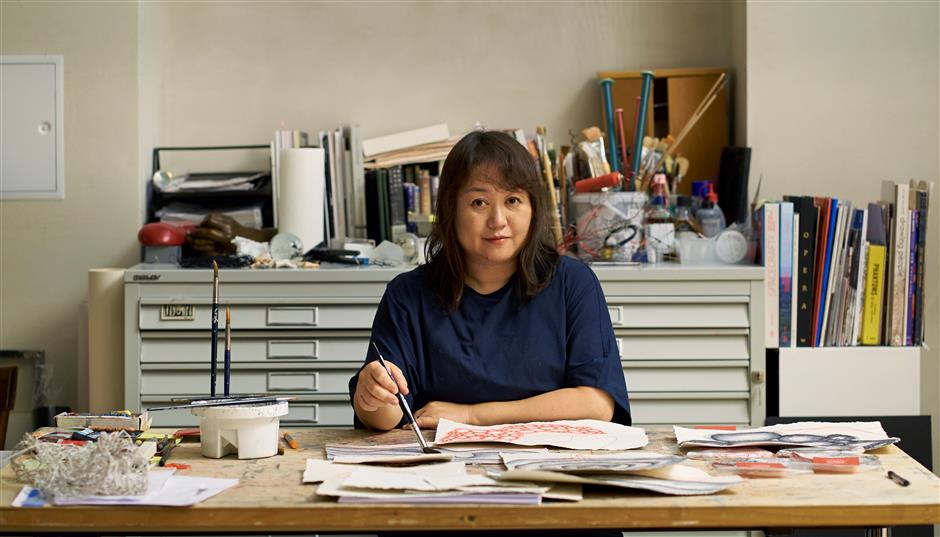 Born in Osaka in 1972, Chiharu graduated from Kyoto Seika University's oil painting department in 1996. Later, she moved to Berlin to study art

In 2008, she was awarded with "The Minister of Education, Culture, Sports, Science and Technology's Art Encouragement Prize for New Artists, Japan."

In 2017, Mori Museum invited Chiharu to hold a solo exhibition. However, the day after receiving the invitation she found out her cancer had relapsed after 12 years.

"In the following two years, I received medical treatment while producing my artworks. During the process, I savored the struggle of both my soul and body. Finally, I started thinking about what the soul actually is and where it goes after death. Perhaps that's where the title of this exhibition comes from," she said.

Chiharu said she learned how to paint at the age of 12. However, she later realized that no matter what she painted, everything was a copy of some other painting.

"Apparently, painting could no longer quench my desire, but 'painting' thread in the air gave me a new form of expression," she said

In her work "Uncertain Journey," the artist said: "Life is like a journey, and we are on the same boat with no clear destination. Someone might get off midway, yet no matter how, the boat will always move on. Then what is the goal of living? I am moving forward on this boat and thinking of the question at the same time."

Perhaps her emotional connection to boats comes from her childhood experience of visiting her parents on the sea. "When navigating on the sea to some unknown place, I had a special feeling, as if I were floating in the vast universe. I didn't care about the future, I only knew that I really existed at such a moment," Chiharu said.

In her installation "Where are we going?," several small white boats are suspended above the exhibition hall, as if they are sailing in the air, leading visitors on an unknown journey.

Another highlight of the exhibition is "Accumulation: Searching for the Destination," situated at the end of the exhibition on the second floor. In it, many old suitcases are drawn using red threads. A specially designed engine lifts some of the suitcases in the air, as if they're on an endless journey without pausing.

"The further you drift and the more you mix, the more you arrive at a place that allows you to re-examine your inner place," she said.

That might explain her move to Germany 25 years ago. "I've had various experiences in Germany where I've strongly realized I am Asian. Such identity recognition makes it easy for me to express my emotions," Chiharu said.

The exhibition also embodies her concept of "present in the absence."

She has redefined the concept of memory and consciousness by collecting ordinary objects such as shoes, keys, beds, chairs and dresses, and embedded them in immense thread structures.

The work "In Silence" is derived from an old memory: a fire in a neighbor's house when she was 9 years old and a burnt piano inside it.

"At that instant, I thought I might lose my sound like that burnt piano. I wanted to conjure up the site of a concert through a piano, chair and black threads," Chiharu said.

In her eyes, the black thread represents the vastness of the universe in which man lives.

"This is a concert without sound, but I imagine someone is playing and someone is listening," she said.

Some things no longer exist in real life, but they exist deep in the artist's mind as a soul without form.

"The more you think about them, the more tangible their existence becomes," she said.

For example, her work "Connecting Small Memories" loosely strings together a huge number of tiny daily-use items with red threads, condensing a complex network of things and items and a network of items and people.

In addition to the symbolic thread, Chiharu is good at using old, ready-made items. For the large-scale installation "Inside and Outside," she collected abandoned wooden windows from multiple construction sites in Berlin and overlapped them into a wall, as if the curved wall is a wall that separates time and space.

The exhibition also traces back her early artistic practice through photos and documentary videos.

In order to be present at the exhibition and interact with visitors, Chiharu quarantined at a local hotel for 21 days.

"During quarantine, I was unable to communicate with others except on my phone," she said. "Every day after I woke up, I drew the things I saw, from the door, curtain and ceiling to the scenery outside my window, as if writing my own diary. I also tried to draw my dream from the previous night to access my inner side. Due to being cut off from the outside world, unwittingly I had more dreams." 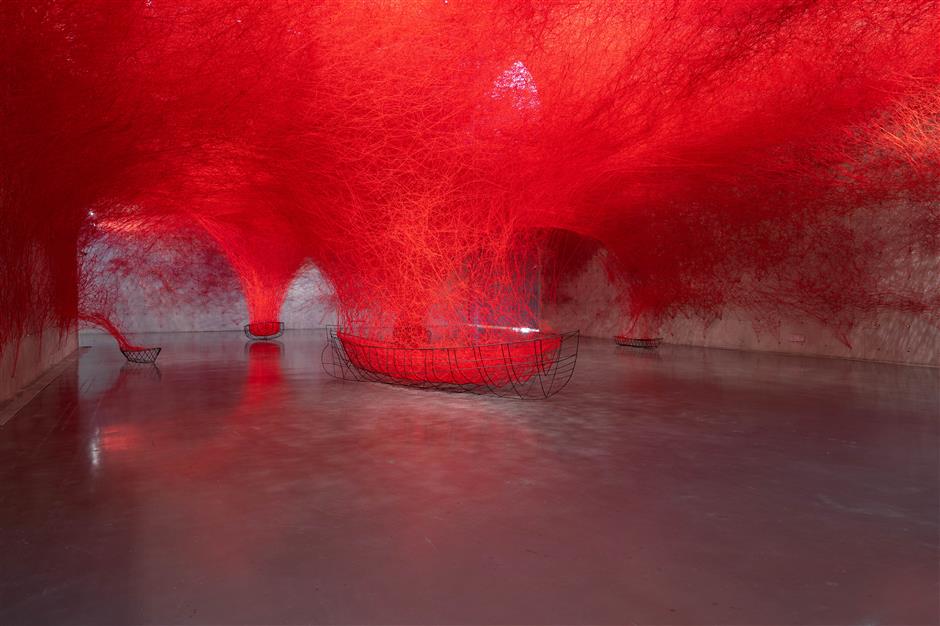 ﻿
Special Reports
﻿
'Painting' thread in the air gives Japanese artist new form of creative expression
Architect of iconic West Lake celebrated in interactive show
After winter's gloom, bright trumpets herald the advent of springtime
Novel art museum opens with support from tech firm
Hats and garments displayed to charter fashion's evolution throughout history
A cultural blend of literature and coffee
A cup of joe in the 'city's living room'
A rare study in normal – the prolific career of an author
A concession to translated Chinese novels
Foreign scribes weigh in on city's ubiquitous coffee
EXPLORE SHINE