The expansion of the population and emergence of a prosperous economy led to a thriving Hangzhou during the Southern Song Dynasty.

At the same time, woodblock printing technology accelerated the spread of literature and knowledge, making Hangzhou a mecca for scholars and literatus.

If historians were to pick a leading figure in Hangzhou during that era, they would select Su Dongpo without hesitation. Su was a writer, poet, calligrapher and statesman. For many in the country, his poetry and writings were the summit of literature in 11th-century China, while in the eyes of Hangzhou locals, it was Su who laid the foundations for the basic layout of the current West Lake.

The Song Dynasty Cultural Legacy Project starts with Su's footprints in Hangzhou. The "Following Su Dongpo, Traveling Around Hangzhou" Exhibition at West Lake Museum focuses on Su's life and provides visitors with innovative angles to learn about ancient Hangzhou from centuries ago.

"We combed through the cultural legacy left by Su and categorized his footprints into three tracks, namely the lake, hills and city. That is also the three main segments of the exhibition," said the curator, Chen Jie.

"This year, the museum is going to host a series of exhibitions themed on the Song Dynasty. Next, we will put focus on folklore, archeology, the Maritime Silk Road and handicrafts to explore more about the dynasty."

Children play the magic sand to mimic dredging the sludge and building the causeway at the exhibition.

Su came to Hangzhou as mayor at the beginning of the Southern Song Dynasty's Yuanyou era (1086–1094). During his tenure, he was concerned with the suffering of people and left a legacy of many contributions to the city. Today, he is still fondly known and remembered as the "old mayor."

Though he had lived in Hangzhou for only five years, he toured around the city's temples, gardens, hills and lakes, eulogizing the landscapes in his poetry, prose, calligraphy and seals.

"In efforts to carve out more cultural heritages from Su, the exhibition is designed with interactive activities, leading children to start a new journey into Su Dongpo's life," said Pan Cangsang, director of West Lake Museum. "We hope they could learn from playing and understand from watching, feeling the unique charm of the Song Dynasty culture and inheriting Chinese tradition." 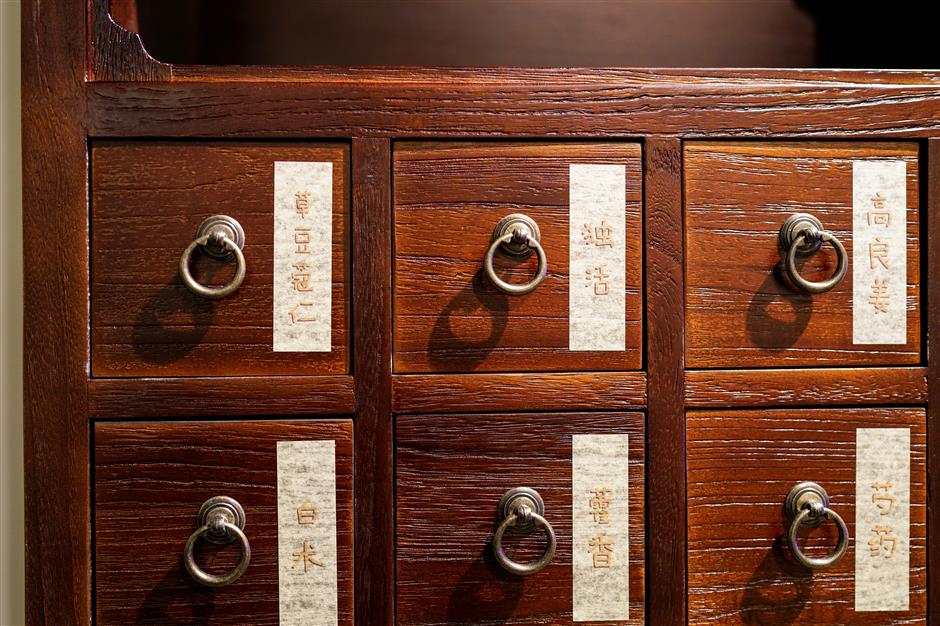 A cabinet of boxes containing herbs

During his tenure, Su led locals to dredge the West Lake and pile up the Su Causeway, which helped solve drought problems faced by farmers and won him much praise from locals.

The museum has set up a magic sand booth to allow children to mimic dredging the sludge and building the causeway. The sand is coated with a hydrophobic compound which makes the grains of sand adhere. When the sand is removed from water, it is completely dry and free to form any shape in molds. That is an ideal material for kids to experience the dredging operations of centuries ago.

In 1090, Hangzhou suffered from both a plague and a crop failure. Su initiated to establish the Anlefang Clinic by calling for donations from residents and applying for royal court subsidies. It is believed to have been the first public-private partnership clinic established in Chinese history.

With the help of a doctor friend, Su developed remedies which were free to local residents. Patients were isolated in the clinic in a bid to prevent cross-infection. Local monks were invited to take care of the quarantined people and applied remedies according to different symptoms. According to archives, about 1,000 infected people had been treated within three years.

Locals built the Bridge of Zhong'an, which literally means that "everyone is healthy and safe" in Chinese, to honor Su. Although the bridge was pulled down as the river changed route during the following dynasties, the name remains today to designate the area dotted with a couple of top-notch hospitals in Gongshu District.

Su's initiative immediately raised the interest of the royal court, and a batch of public-private partnership clinics were erected later across the country, curing a number of impoverished infected people. The exhibition has set up a small pharmacy that allows kids to smell and observe the herbs used to make up the ancient remedies.

Su is also famed for his calligraphic works and left a couple of engraved stones and tablets in Hangzhou. The ancient scholars invented rubbing methods to reproduce inscriptions on surfaces, the only media available centuries ago to spread stone inscriptions. At the exhibition, children can experience rubbing stone inscriptions.

Date: Through March 31 (closed on Mondays)