Deciphering the art of Xu Bing

Once visitors decipher Xu Bing's art, it usually lingers in the mind for a long time.

"Xu Bing: Found in Translation," a large-scale research-oriented solo exhibition of the artist, is currently under way at the Museum of Art Pudong.

Over 70 (sets) of his representative works and recent masterpieces from the 1980s are on display on the museum's first and third floors, including prints, installations, archive records, manuscripts, videos and documentaries.

Born in the Chinese city of Chongqing in 1955, Xu is one of the important figures of China's New Wave Art in the late 1980s. He is widely regarded as one of China's top modern artists for a number of impressive works.

Xu's art is difficult to grasp if you are not familiar with him. It is preferable to approach his artwork after carefully reading the pamphlet and the writing on the wall.

On the first floor, a range of artworks based on languages and texts, such as "Monkeys Grasp for the Moon," "Square Word Calligraphy" and "Book from the Sky," reveal the unlimited possibilities of language.

"Monkeys Grasp for the Moon" is an installation artwork that comprises 21 laminated wood pieces. Each one is a representation of the word "monkey" in 21 languages, including English, Chinese, Japanese, Indonesian, Thai, Hebrew and even in Braille. The words are shaped to resemble monkeys that link tails and arms together. 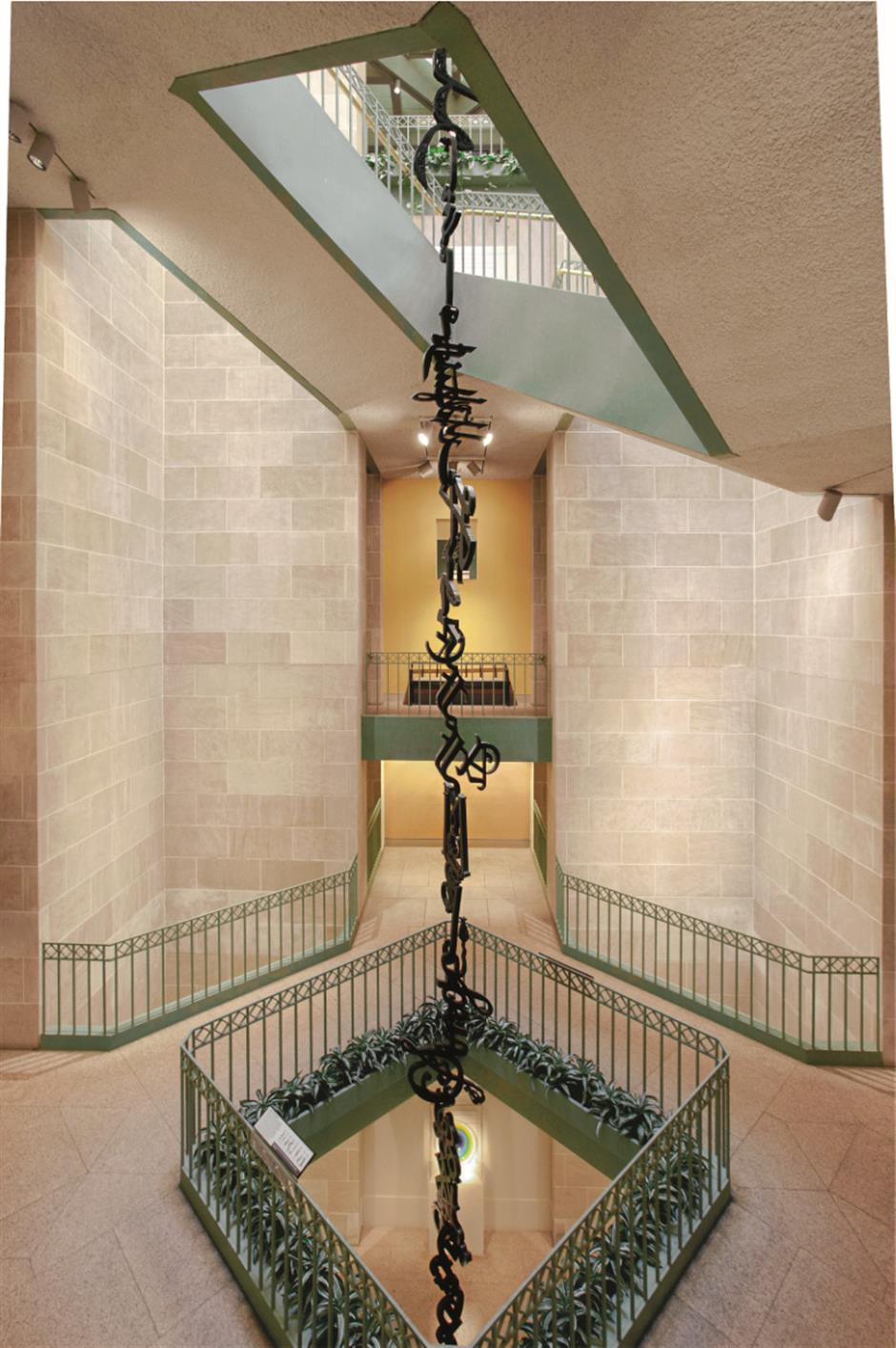 For "Square Word Calligraphy," Xu designs a calligraphic system in which English words come to resemble Chinese characters. Like a linguistic breeder, the artist combines Chinese calligraphy with English writing to create a new composite that does contain the real meanings.

In "Book from the Sky," over 4,000 fake Chinese characters look genuine, but they are not. It took him four years to complete the project.

Using ancient hand-engraving and printing technologies, 120 sets of "Book from the Sky" (each set has four volumes) were handcrafted. The meticulous, exhaustive production process and the format of the work, arrayed in ancient Chinese classic way, looked so authentic that the viewers could hardly believe that these exquisite texts actually make no sense at all.

"I can only make the fake Chinese characters look as authentic as the actual ones by obeying the core logic of the structure of Chinese characters. The combination of 'mountain' and 'water,' for example, denotes nature, whereas 'work' and 'knife' denote man-made goods.

"To accomplish the impression, I need to use a specific feature of Chinese characters to make the fake ones look more legitimate than the real ones – it's like seeing a familiar face but not being able to say their name," Xu clarified.

In Xu's opinion, Chinese calligraphy is not merely an ancient art with strict rules; it can also be modern and express an avant-garde mentality. 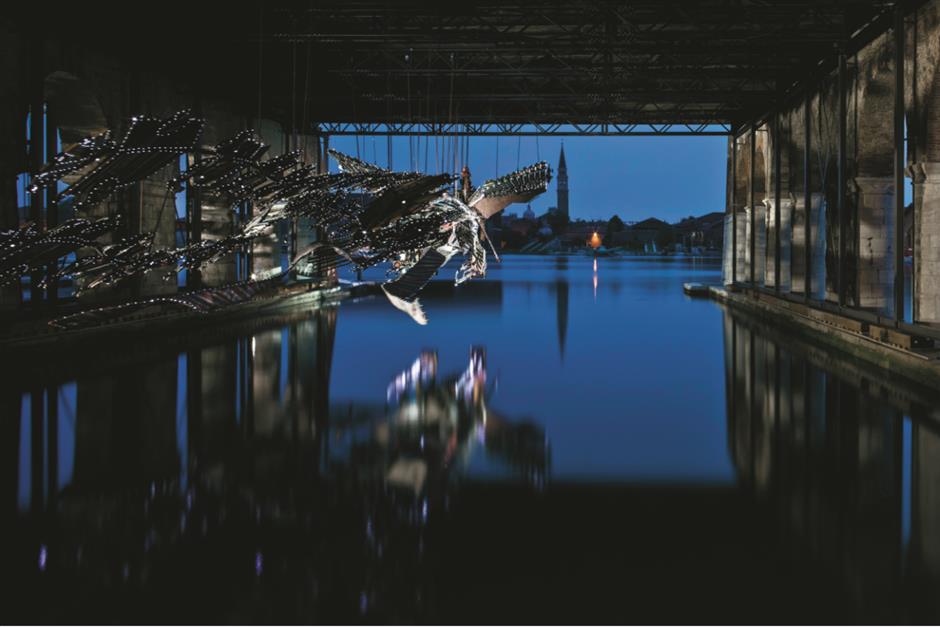 In Xu's opinion, Chinese calligraphy is not merely an ancient art with strict rules; it can also be modern and express an avant-garde mentality.

The exhibition's highlight is the massive "Phoenix Project," which comprises a pair of giant Chinese phoenixes (凤 for male phoenix and 凰 for female phoenix) dangling in the air.

Visitors will see that they are built from thousands of abandoned materials, as well as the workers' daily necessities that Xu sorted from Beijing building sites. Construction materials, construction debris and crude production equipment are all used to create this piece.

Chinese phoenixes are traditionally associated with rebirth, and Xu's phoenixes can be seen to signify the cycle of painstaking development and renewal to echo with the process of urbanization.

"The sharp contrast between the glamorous modern architecture and the primitive work and living conditions of the construction workers in the metropolis really shocked me. The artwork stems from my philosophical thinking about urbanization, new labor and capital accumulation."

In reality, the work impacted viewers not only because of the beauty of these two birds, but also because of the innumerable scars and dreams they carried, as every piece of material for the phoenix was used by laborers.

When the phoenixes appear overwhelming in size and heavy in emotions, "Blow Dust" is the opposite. Sometimes, it can be easily overlooked. 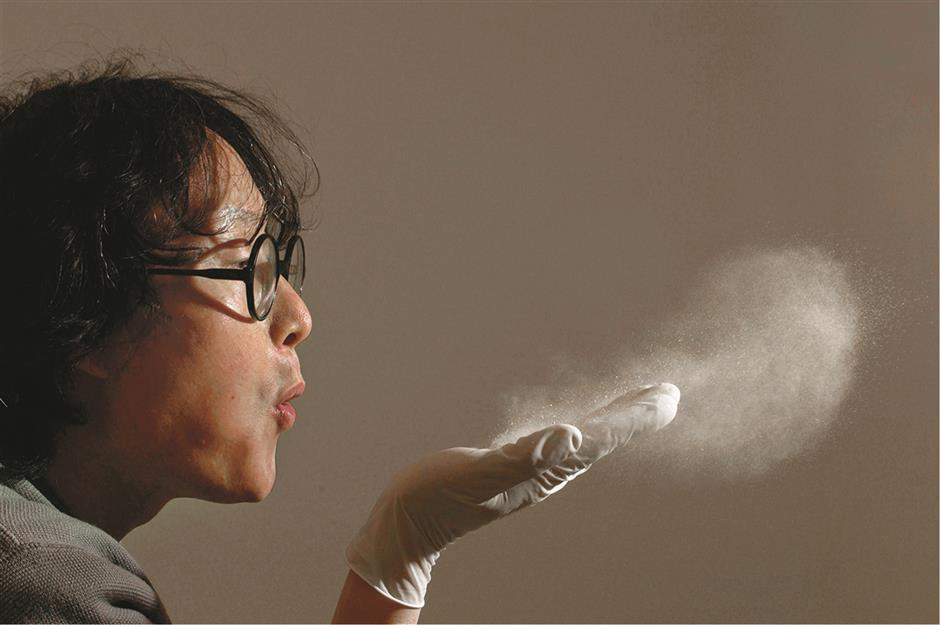 Among the dust on the floor, the characters "As there is nothing from the first, where does the dust itself collect" (本来无一物,何处惹尘埃) are from the Chinese Buddhist teaching by Zen master Huineng (AD 638-713).

They are made from particles stored in a dust bag that Xu gathered after the 9/11 terrorist attacks.

"The entire lower Manhattan was covered in gray dust. When I collected this bag of dust, I didn't know what I would do with it. However, a voice told me that it contained information about life and a fatal event," Xu said.

This work has traveled to various venues, including Cardiff, Berlin, San Paolo and New York, forming a mélange of different dust particles from these cities.

"This work tries to explore not the event itself, but rather, the relationship between spiritual space and materialism. What is more eternal and more influential? What is the real power?"

Another interesting and profound piece at the exhibition is the work titled "Background Story."

Xu creates a Chinese ink painting composed of light by attaching dried flowers, newspapers, plastic bags, and other garbage to the frosted glass at the back.

The art is a play in shadow and light.

At first glance, the painting does not appear to be made by the three-dimensional effect of blending and imitating pigments. But visitors at the back of the artwork will encounter a starkly contrasted landscape of debris. Detecting which substance produces the contour of a mountain, river, or tree in the front using light on frosted glass would be fun.