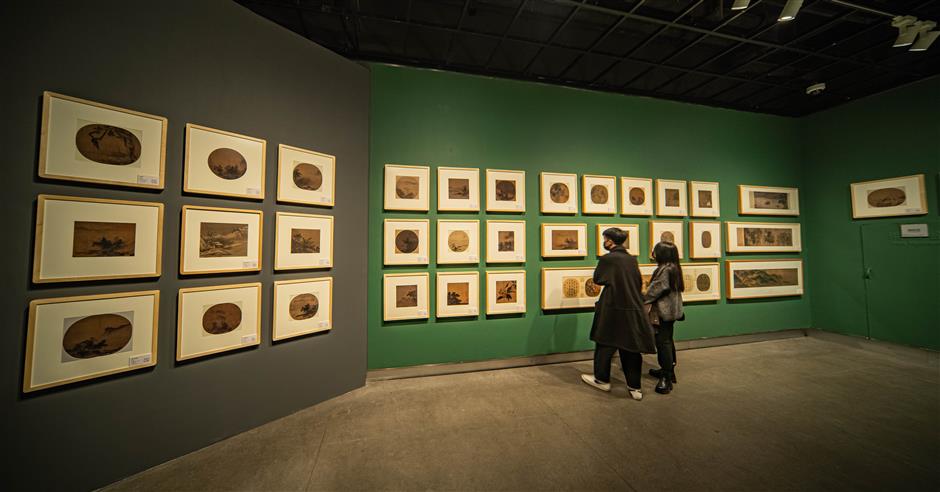 Visitors take a close look at the exhibited paintings, ranging from the pre-Qin period (prior to 221 BC) to the Yuan Dynasty (1271-1368), at Zhejiang Art Museum.

The Great Series of Chinese Paintings through the Ages," compiled and published by Zhejiang University and Zhejiang Cultural Heritage Bureau, is a large-scale national project spanning different dynasties and countries.

Since its launch in 2005, nearly 12,500 Chinese paintings from more than 260 cultural organizations and museums have been featured in the book series. Today, it is dubbed "the most comprehensive collection and authentic image record with the most refined printing quality, and the best publication of Chinese painting" in the world.

Around 1,500 paintings and archival items, ranging from the pre-Qin period (prior to 221 BC) to Yuan Dynasty (1271-1368), are on display at Zhejiang Art Museum through April 20. Emblematic of the highest level of the ancient Chinese paintings, they provide visitors with a well-rounded picture of the country's art throughout history.

The organizers use diverse display methods, such as images, text and new-media technology, to present the magnificent achievements of ancient Chinese paintings reflected in the "Great Series." The exhibition is considered a reunion of national treasures scattered around the world and a vivid attempt to showcase the profound nature of Chinese art throughout history.

Dating back to the Five Dynasties and Ten Kingdoms Period (AD 907-979), Hangzhou was always described as "Southeast Buddhist Kingdom"

because it contains numerous Buddhist grottoes and temples teeming with devout believers. The exhibition includes a replica of the 18-arhat grotto on Feilai Peak. 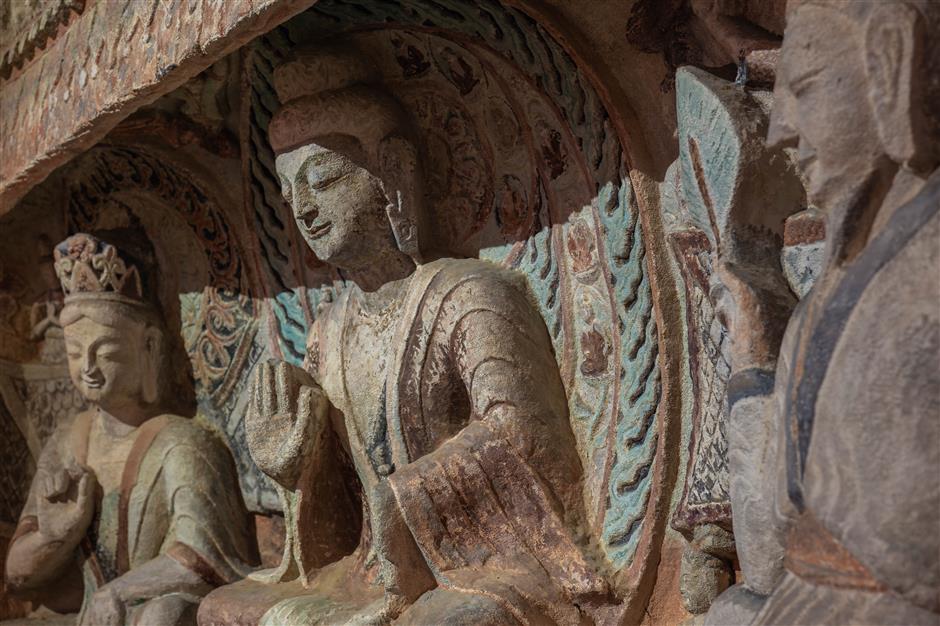 In Chinese Buddhism, an arhat is a person who has gained insight into the true nature of existence and achieved spiritual enlightenment. Eighteen arhats were depicted as the original followers of Buddha and are a popular subject in Buddhist art.

The exhibition is also a new exploration of the "art + technology" concept. Ten sets of digitized ancient artworks from eight universities, including Zhejiang University, Shanghai University and Tongji University, are on display via virtual reality and augmented reality, motion capture and eye-tracking technologies, endowing the ancient paintings with new life.

Prior to the Qin Dynasty (221-206 BC), Chinese painting primarily featured lines as the basis of modeling and a long exploration of shaping objects.

By the Han Dynasty (206 BC-AD 220), painting gradually evolved from conceptual portrayals to realistic styles, which was a significant development. For example, figure painting transformed from rigid and lifeless states to be more vivid, as if a miracle had occurred.

During the Tang Dynasty (AD 618-907) when Buddhism was integrated into Chinese civilization, folk painters became more common across the country. The exhibition chronicles how landscapes and birds were gradually elevated from the background of figure paintings and developed into independent genres in the middle and late Tang Dynasty.

Connoisseur groups developed among nobility and scholars along with the growing number of professional royal and folk painters. The art in public spaces such as palaces, ancestral halls and temples laid the universal foundation for aesthetics among the masses, which in turn consolidated the Chinese cultural community.

From the Southern and Northern Dynasty (AD 420-589) to the Tang Dynasty, Buddhism permeated the country and merged with local Confucianism and Taoism under the influence of devout believers from imperial families and the upper class. 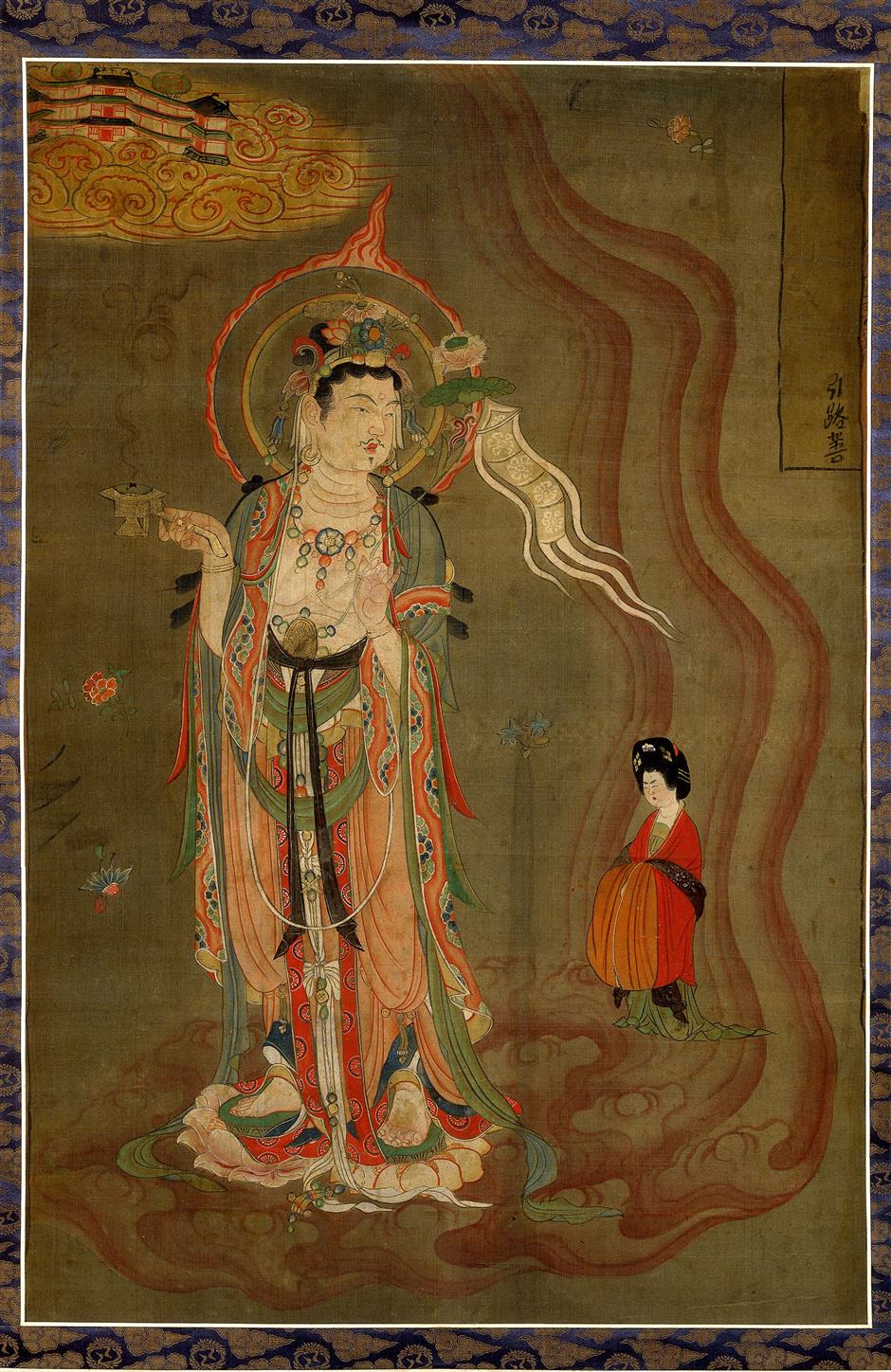 A Tang Dynasty painting of the Soul-guiding Bodhisattva is one of the highlights in the exhibition.

An increasing number of temples were built across the country, evolving into an art movement of unprecedented scale, longevity and social participation. This phenomenon gave rise to millions of public art spaces with architecture, sculptures, calligraphy and paintings. Among them, grottoes, with their majestic and orderly successions, became great centerpieces of the religious art genre. In this way, national art resources, which had been the exclusive domain of the ruling class, were brought into people's daily lives.

The Song Dynasty (960-1279) is considered the heyday of Chinese painting development. The royal court prioritized the humanities, turning to people's inner emotions with a minimalist art style that was evident in exhibited artworks.

Compared with previous dynasties, the Yuan Dynasty paintings showed obvious regional differences. In the northern region, the Song painting style reigned supreme. In the southern region, painters carved out new positions and elevated the literati painting genre to the top.

A painting created by Ni Zan in the Yuan Dynasty

Great Series of Chinese Paintings through the Ages Exhibition

Dates: Through April 20, closed on Mondays