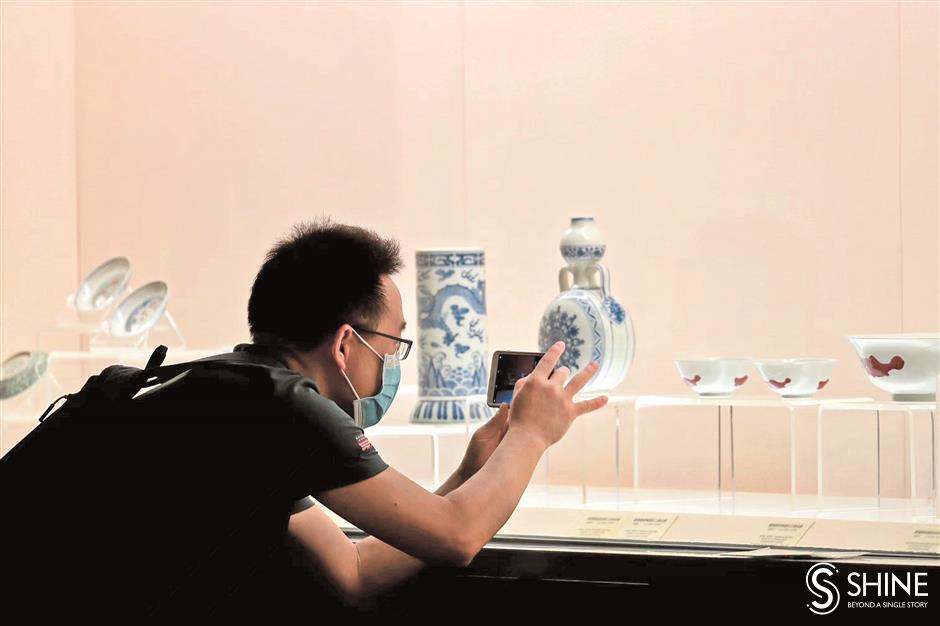 A man takes a picture of an artifact at the Shanghai Museum's "Treasure of Prosperity" exhibition on Friday. The museum reopened yesterday after being closed for over two months due to COVID-19 restrictions.

"Yogya Bintang House Mini, 2008" from the Yuz Foundation collection. Yoshitomo Nara's exhibition at the Yuz Museum includes more than 70 paintings, sculptures, ceramics and installations, as well as over 700 manuscripts, including some never-before-seen sketches.

The art scene is finally back!

Visitors have to produce a green health code and a negative COVID-19 test result valid for 72 hours for entry. Most museums insist on appointments before letting in visitors.

"It is exactly 113 days since we last welcomed visitors," said Yang Zhigang, the director of the Shanghai Museum. "We hope that they will get back the old feeling inside the exhibition hall."

According to Yang, the museum has limited visitors to 4,000 per day. Almost 2,000 people had reserved for morning entry on the first day of its reopening.

The museum gave visitors a special mask as a small gift.

"We have actually been waiting for the confirmation of the reopening date for a month," said Lu Huihong, one of the staff members at Long Museum West Bund.

Since June 1, Lu and the museum's team have been busy working on three new exhibitions, including American artist Jennifer Guidi's first solo exhibition in China.

Attracted to sand as an art material, Guidi experimented with it on canvas. Her abstract compositions refer to the natural world as she mixes sand with paint to depict arresting natural and cosmological phenomena.

The solo exhibition of Chinese artist Shen Xiaotong was also unveiled to the public yesterday.

"The duration of the exhibitions might be shortened as we have a cluster of exhibitions on the list," Lu said.

Originally scheduled to open at the end of April at Bund One Art Museum, the exhibition, "Botticelli and Renaissance," was perhaps the year's most anticipated exhibition.

The exhibits were on loan from the Uffizi Gallery, one of the world's most visited museums in Italy. It was one of the 10 planned exhibitions by Uffizi to be held in Shanghai over the next five years as part of a collaboration agreement reached between the Uffizi Gallery and Shanghai Tix Media.

However, according to a source from Shanghai Tix Media, "Botticelli and Renaissance" would be postponed and a new date would be announced later. Instead, "Uffizi Self-Portrait Masterpieces" will be the first from the gallery to open in the city on September 9.

The Italian painter and printmaker was known for his simple yet stunning still life paintings, and had a reputation for being a recluse, spending his time inside the four walls of his Bologna studio.

Today, many people are familiar with "Morandi colors," used in fashion and lifestyle. The harmonious, silent colors of the bottles, vases, bowls, and plates have a soothing power, especially for visitors just coming out of a months-long lockdown.

Opal Liu is looking forward to the Yoshitomo Nara's exhibition at the Yuz Museum.

"The exhibition opened on March 5, but I was too busy at that time. I will not miss it when it reopens to the public again," said the 30-something office worker.

The exhibition is a significant retrospective of the world-renowned Japanese artist. It includes more than 70 paintings, sculptures, ceramics, and installations, as well as over 700 manuscripts, including some never-before-seen sketches. It was earlier scheduled to run through September.

While most of the city's art museums remained closed, there have been lots of activities at M50, an art hub that houses galleries, designer shops and studios, since last week.

"ShanghART has two exhibition spaces in the city; one is our main venue at West Bund, and the other is at Moganshan Road," said Helen Zhu, one of the ShanghART staff members.

It is a pity that the main venue, where Sun Xun's solo exhibition is being held, remains closed.

"We do hope the once dazzling art scene along West Bund will be soon revived," Zhu said.

As compensation, Liu Yue's exhibition at M50 on Moganshan Road is open, and visitors only need to produce negative COVID-19 tests for entry.

Be it a coincidence or fate, Liu's exhibition, which opened on March 10, dealt with the theme of the freezing moment.

The artist weaved a rope into a huge net, constantly increasing the lengths between the knots to enlarge the meshes from a two-dimensional giant net spread out from top to bottom of the wall inside the gallery.

Then balls of various sizes are randomly rolled along the highest point of the net. Different mesh traps catch them according to their sizes and masses. Mixed fluids (cement, gypsum, flour) with strong solidification forces are dumped from the highest point. They flow downward along the track of the rope grid and are blocked by the spheres occluded by the rope grid to change the flow track.

"Unwittingly, time did seem frozen in these past several months," Zhu said. "A perfect echo to the artist's theme." 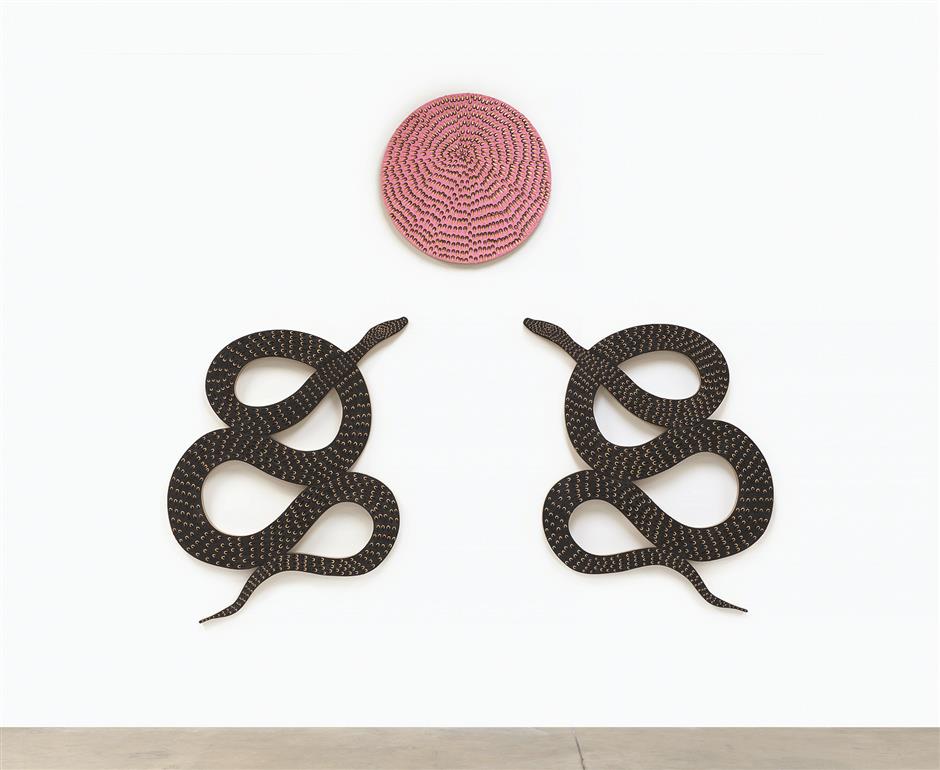 One of Guidi's new works on display at Long Museum West Bund is "Born Under the Pink Moon," which features chakra and snake motifs. 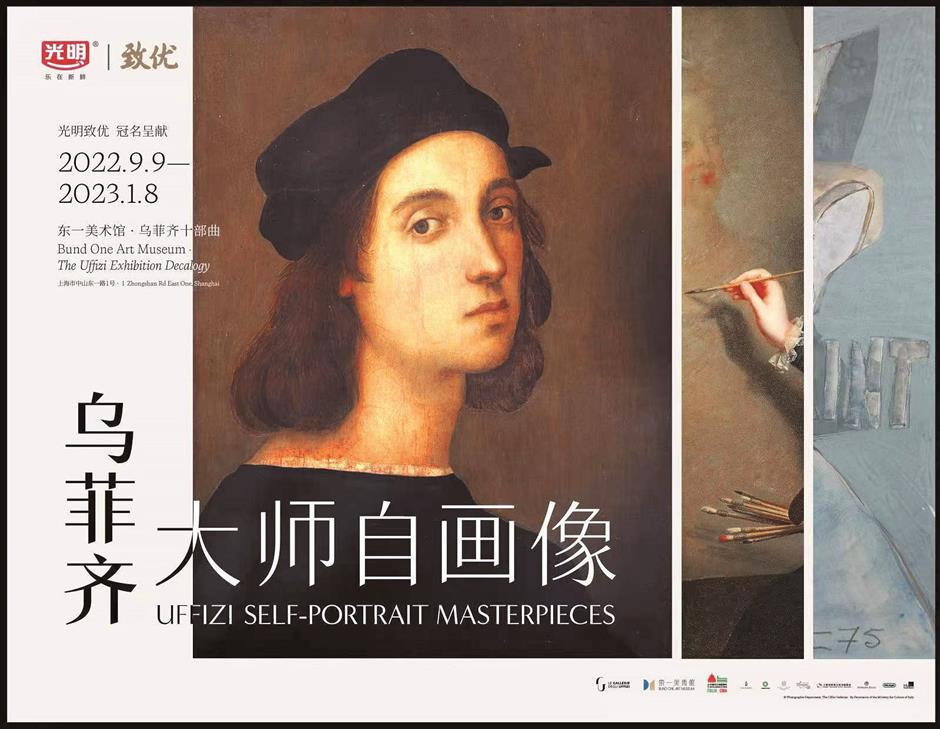 The Bund One Art Museum has announced that the exhibition "Uffizi Self-Portrait Masterpieces" will open on September 9. The exhibits are on loan from Italy's Uffizi Gallery.