Lotus-themed antiques hark back to Buddhism links of early dynasties

Hangzhou is now ablaze with pink lotus flowers through September, luring endless streams of visitors to appreciate their beauty, elegance and fragrance.

The city's tradition of growing lotus could date back to the Southern and Northern Dynasties (AD 420-581) when Buddhism dominated the city. Lotus is the epitome of the religion and has been widely used in Buddhist objects and rituals throughout history.

Dubbed "Southeast Buddhism Country," Hangzhou was dotted with temples in hilly areas at the time, attracting cavalcades of devout believers. Since then, the city started to cultivate the flowers, which in return deeply influenced art and life.

In keeping with the season, 170 sets of antiques and handcrafts with lotus patterns are on display at the West Lake Gallery through September 7. Visitors can catch a glimpse of Hangzhou's, or to some extent, Zhejiang Province's rich lotus culture through the exhibition.

Except for religious meanings, the lotus has also been considered an incarnation of beauty and purity, as well as honesty and persistence. Growing in mud, it blossoms into a lovely flower, fully fitting Chinese traditional philosophy of detachment. 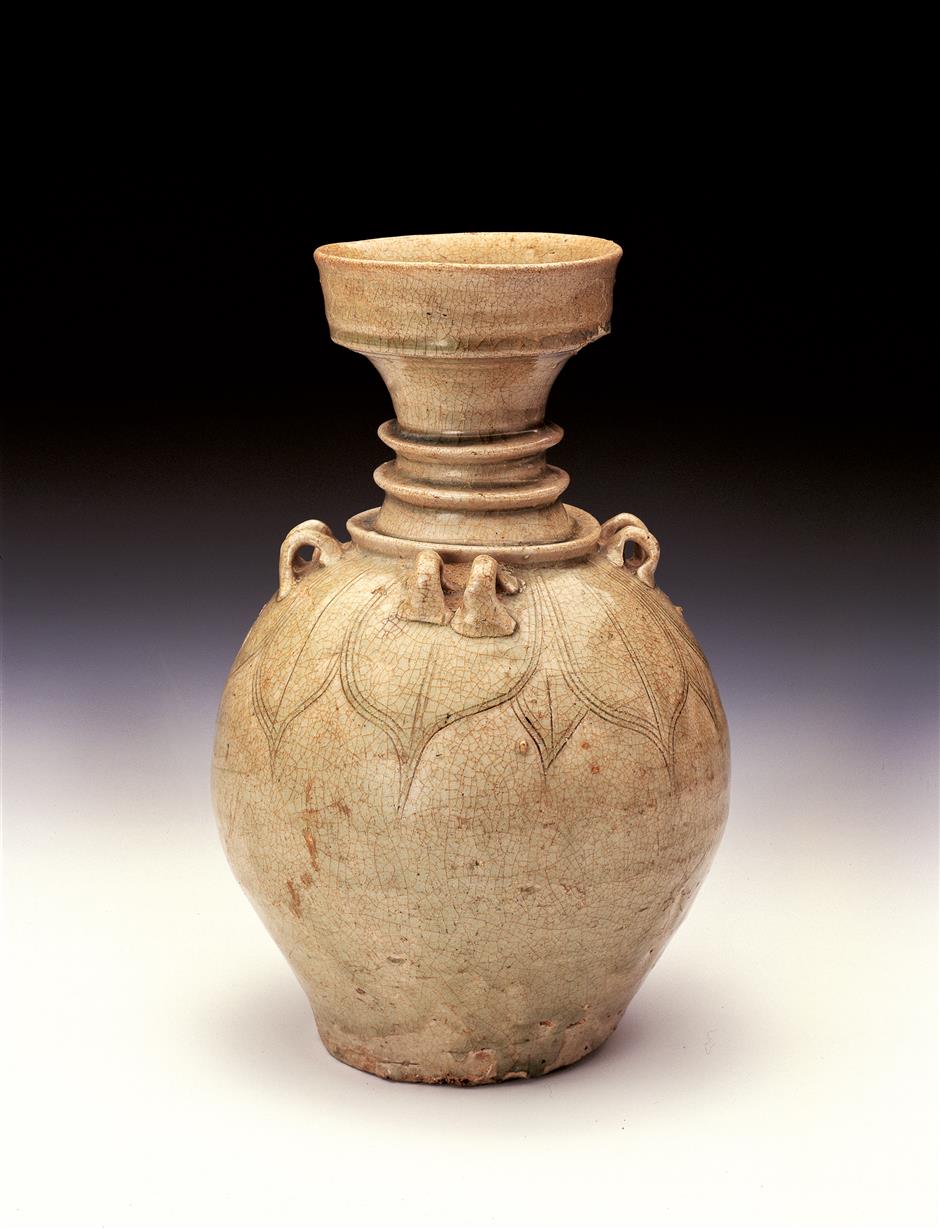 A pot fired by Ou Kiln in the Southern and Northern Dynasties bears the lotus petal pattern.

The exhibition features items fired by the Ou Kiln in the Southern and Northern Dynasties. At that time, ceramic techniques were largely boosted thanks to domestic cultural exchanges. The region, along Zhejiang Province's Cao'e River, evolved into the production center of porcelains.

Lotus-patterned tea bowls and teapots melded with the tea ceremony trend in Hangzhou during this period. The ceremony sought for inner peace and inspired integration of the lotus with art.

In Buddhism, the lotus is symbolic of purity of the body, speech and mind. While embedded in the mud, its flowers blossom on long stalks as if floating above the clouded waters of attachment and desire. It is also symbolic of detachment as drops of water easily slide off its petals.

According to legend, Gautama Buddha was born with the ability to walk and everywhere he stepped, lotus flowers bloomed. 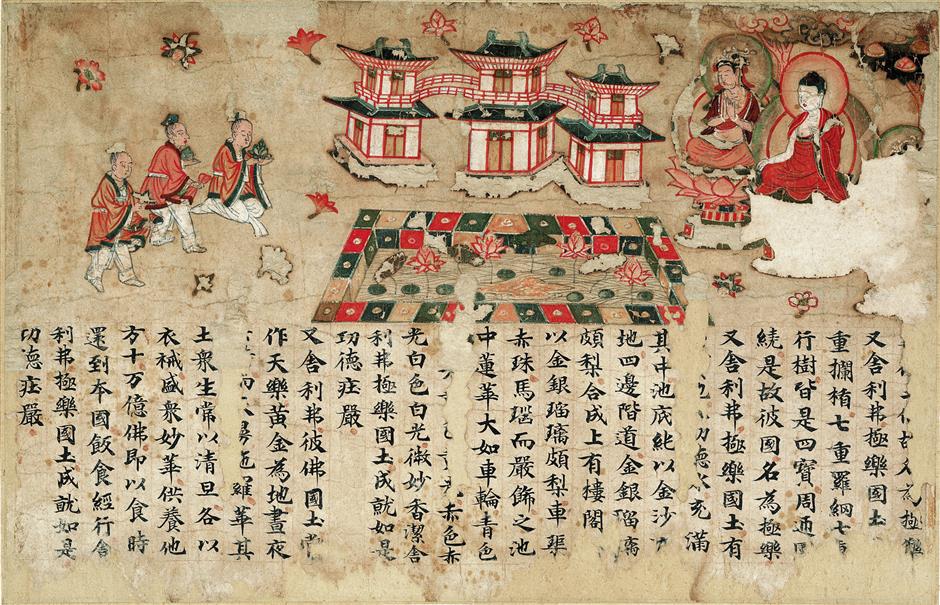 A rare Amitabha sutra on display is believed to be the only Buddhist scripture in existence that features both pictures and text.

The exhibition displays a rare Amitabha sutra. It is believed to be the only Buddhist scripture in existence that features both pictures and text. Historians see it as a rare historical document about the religious culture of the Tang Dynasty (AD 618-907).

Amitabha sutra portrays the Sukhavati, the pure land of Amitabha in Mahayana Buddhism. In the painting, a pond of lotus flowers is blossoming. Gautama Buddha sits on a lotus, seeking complete enlightenment for the benefit of all sentient beings.

A Tang Dynasty figurine is sculptured with the Bodhisattva sitting on the lotus. It was unearthed from Wanfo Pagoda in Jinhua City, Zhejiang Province, and features a hairstyle and accessories characteristic of the Tang Dynasty.

According to archeological discoveries, Buddhism started to penetrate the present-day Zhejiang Province during the Wu Kingdom Period (AD 222-280) and Western Jin Dynasty (AD 265-317). It began to meld with Chinese culture in the Eastern Jin Dynasty (AD 317-420) and Southern and Northern Dynasties. 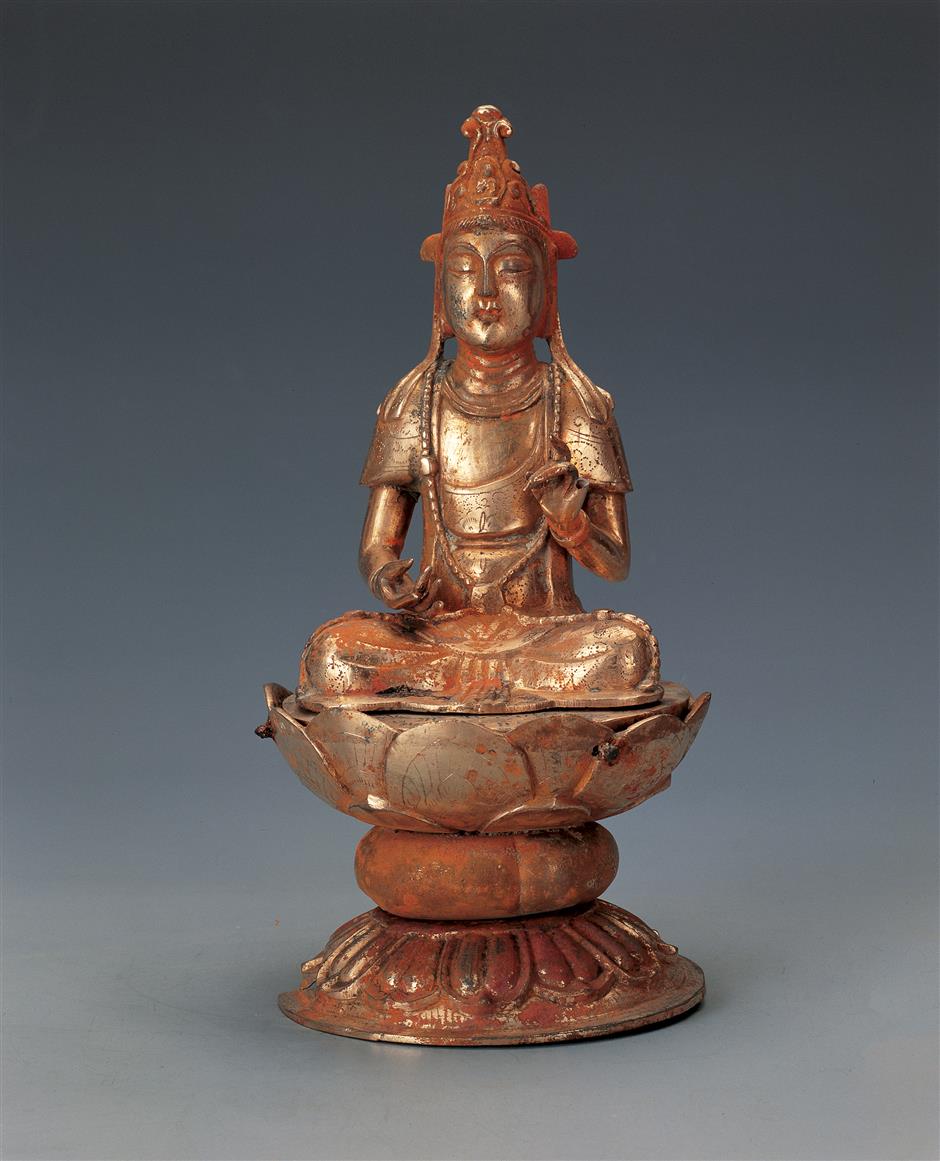 A Tang Dynasty figurine is sculptured with Bodhisattva sitting on the lotus.

Zhejiang Province has long been associated with Buddhism thanks to its abundance of Buddhist grottoes, sculptures and temples. As many of the country's ancient emperors were devout believers, they dug caves, reproduced scriptures and erected religious buildings across the province.

At the exhibition, visitors can see a batch of excavated burial objects ornamented with Buddhist patterns.

A bronze mirror features carved Buddhist-style cloud lines, birds and lotus patterns, which, along with other antiques, show Zhejiang as a production center for ancient Buddhist crafts.

Date: Through September 7, closed on Mondays