Escape the scorching heat of Shanghai summer with art

As Shanghai is going through the hottest period of the year, people are coming up with different ways to "escape" the summer heat?

Exhibitions related to water, sea or the color blue are apparently one of the popular ways to cool down both eyes and minds.

"The Territories of Water" 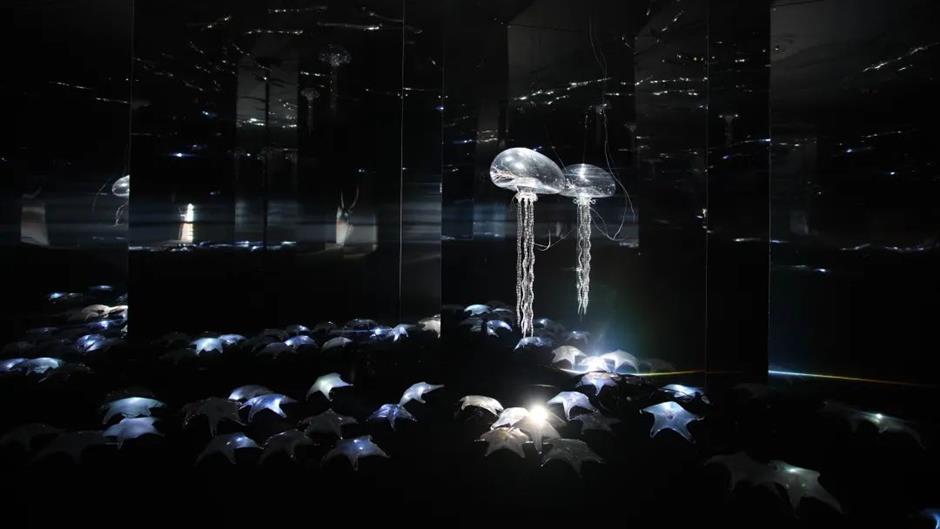 The artifacts on display deal with the relationship between water and culture from a variety of perspectives.

Running at Museum of Art Pudong through the end of August, the exhibition features almost 100 artifacts on loan from the Musée du quai Branly-Jacques Chirac and Fondation Francois Schneider's collections that deal with the relationship between water and culture from a variety of perspectives.

Fish masks are one of the highlights, wearable sculptures held by a hollowed cavity – or by attaching a small woven wicker skullcap – under the crest. These masks were made by the Ijo people who live in the Niger Delta region of southern Nigeria, a vast territory crisscrossed by rivers, swampland and the sea.

Along with ancient relics, such as a 19th-century emerald necklace from the Maori people of New Zealand, various fish traps from Java (Indonesia), Perak State (Malaysia), as well as Kon Tum (Vietnam), the exhibition includes contemporary artworks that create a dialogue between the past and present for a story about man and water.

Yves Chaudouet's "The Fish of Great Depth Have Feet" (2006) uses glass pieces, microprocessors and an LED cluster. Visitors must sign a health declaration form before entering the dark room that houses the artwork. Once inside, they are guided to the bottom of the sea where jellyfish, opaline stars, or mirror eels, live an unknown and enigmatic life. The piece was constructed in close collaboration with master glassmakers of the Centre International d'art verrier de Meisenthal between 2006 and 2011.

Each part of the installation blends blown glass, glass created with a blowtorch and silvered glass to create a peaceful and mystical experience.

The Musee du quai Branly-Jacques Chirac, one of France's most popular museums, is located on the left bank of the River Seine in the heart of Paris. It is dedicated to the arts and civilizations of Africa, Asia, Oceania and America. 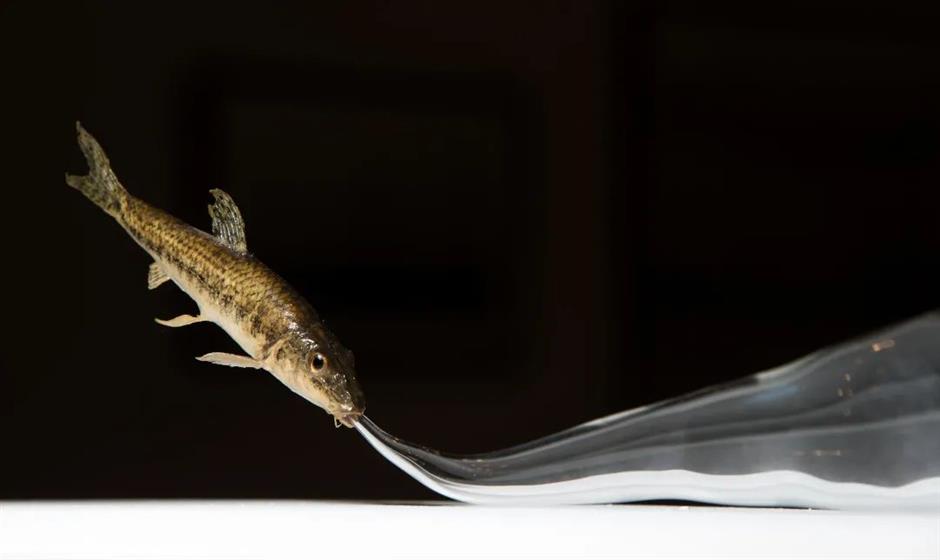 "Thalassa: The Sea in Greek Art from Antiquity Until Today"

The word "Thalassa" refers to a goddess of the sea in ancient Greek mythology, as well as the embodiment of the sea in Greek culture.

The exhibition originally featured 12 ancient Greek cultural relics. However, due to the COVID-19 restrictions, a virtual hologram-projection presentation is applied instead. Altogether 34 groups of modern and contemporary artworks display the culture, art and history of Greece.

Visitors are introduced to real and mythological inhabitants of the sea, from mermaids, sirens, monsters and deities to sailors and fishermen, as well as images of fishing boats, merchant ships, warships, ports and harbors.

Located at the crossroads of Europe, Asia and Africa, Greece has a long coastline along the Aegean, Mediterranean and Ionian Seas.

Mystifying seascapes of gulfs, shores and open oceans – calm and turbulent, menacing and seductive – are featured in the canvases "Holy Sea Tinos" by Yannis Maniatakos and "Untitled" by Dimitris Efeoglou.

The exhibition, jointly organized by the Shanghai Museum and the Hellenic Ministry of Culture and Sports, is running through October 9.

A visitor admires a canvas on display at the "Thalassa" exhibition. 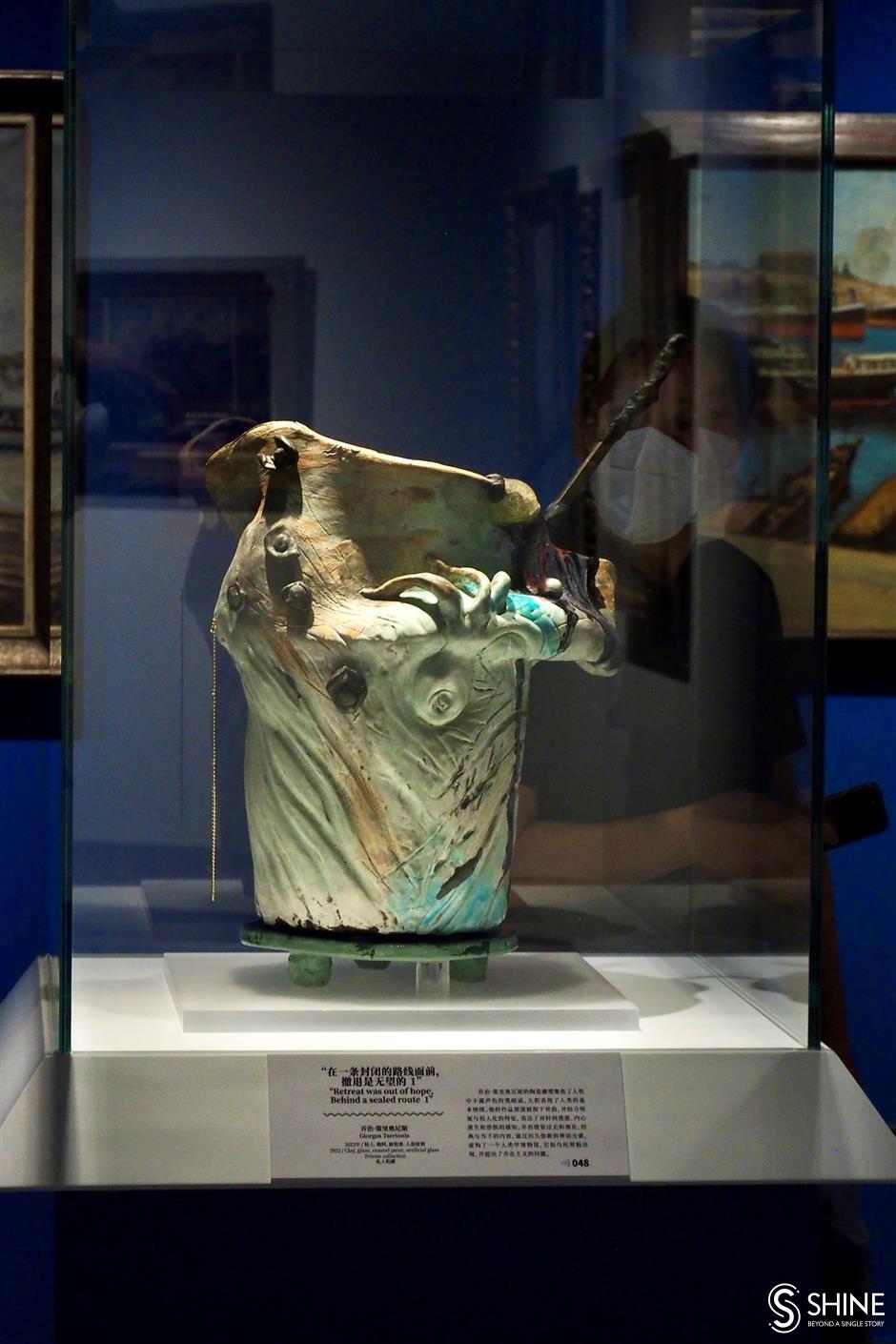 "Retreat Was Out of Hope, Behind a Sealed Route #1" by Giorgos Tserionis ― clay, glaze, enamel paint, aluminum, artificial glass

With a small backpack full of gouache painting materials, a machete and hammock, French artist Bruno Gadenne collected images from a primary forest that later became paintings in his Parisian studio.

Gadenne's first solo exhibition, "Tropical Insomnia," features a series of nocturnal scenes created after a three-month trip to Central America, exploring the relationship between man and nature in the digital age, as well as nature's mystery and beauty.

Traces of wild animals are evident in "The Path," where viewers follow the footprints of a large jaguar, leading deeper into dark and lush vegetation. Usually, his canvases are figureless landscapes. Occasionally, however, Gadenne deviates from the norm.

"Here I am not an intruder as a human being, but a human shown as another animal in this natural habitat. Traveling alone, I am my own model," he said.

For example, in the painting "The Watch," he looks straight at the viewer, spying behind a floating log and watching over his territory. At the same time, he seems threatening and ready to disappear under muddy waters.

The rendering of light in his paintings is intriguing, and it is difficult to tell what time of day or night it is. The scenes are shrouded in a bluish wash or blood-red hue like a cosmic anomaly, made possible by Gadenne's use of glazing – a highly developed painting technique from the Renaissance era.

He creates tension by playing with the rendering of light and deepness of transparent layers, conjuring up a cross between wonder and uncanny feeling. 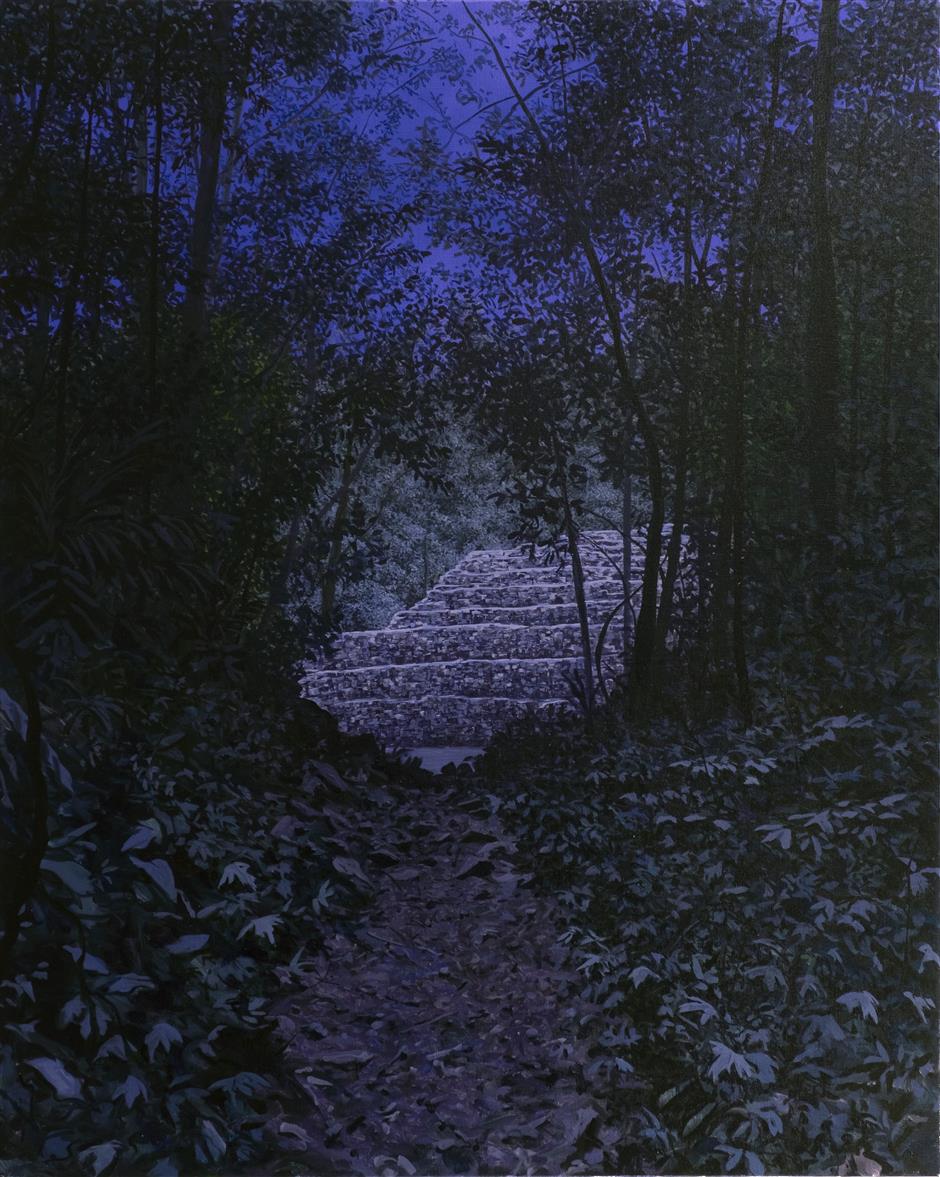 Dates: Through August 23 (closed on Mondays and Sundays), 11am-7pm 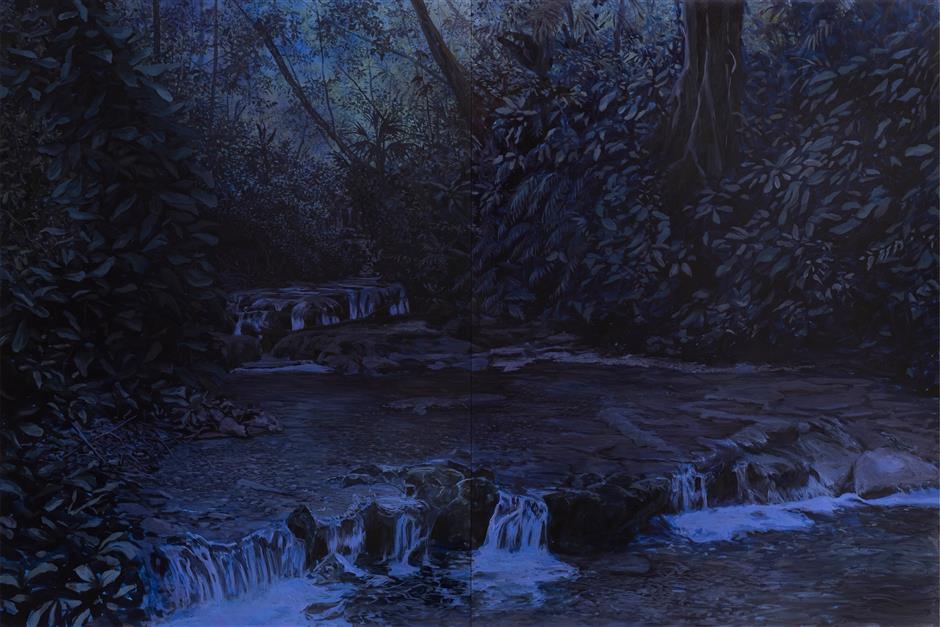 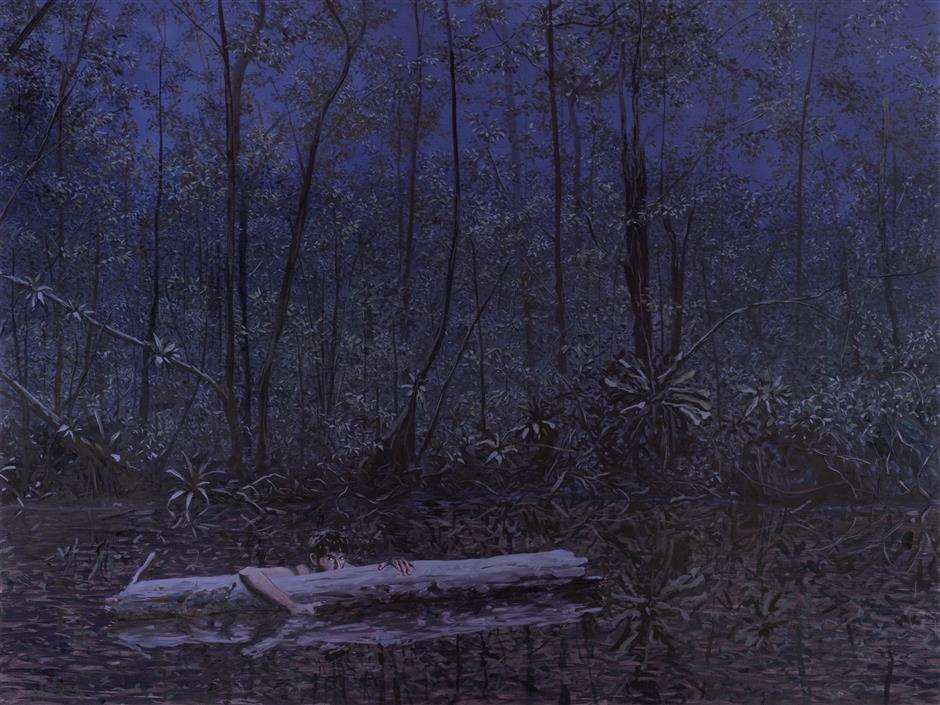