Hangzhou wood sculptor Shen Qiufa and his clay figurine-making collaborator Ding Jianhua have reimagined the spectacular dowry procession that was a part of wedding ceremony for the daughter of a well-off family in China.

They have completed a full model of shili hongzhuang, which literally means the procession carrying dowry, an event which in some cases might stretch for 10 li (5 kilometers) if the girl's family was super rich.

It was such an unavoidable part of the tradition that in ancient times when a girl was born, her parents prepared for their daughter's marriage from birth. After years of preparation, the dowries often included a myriad of items, from beds and wardrobes to mirrors and bowls. 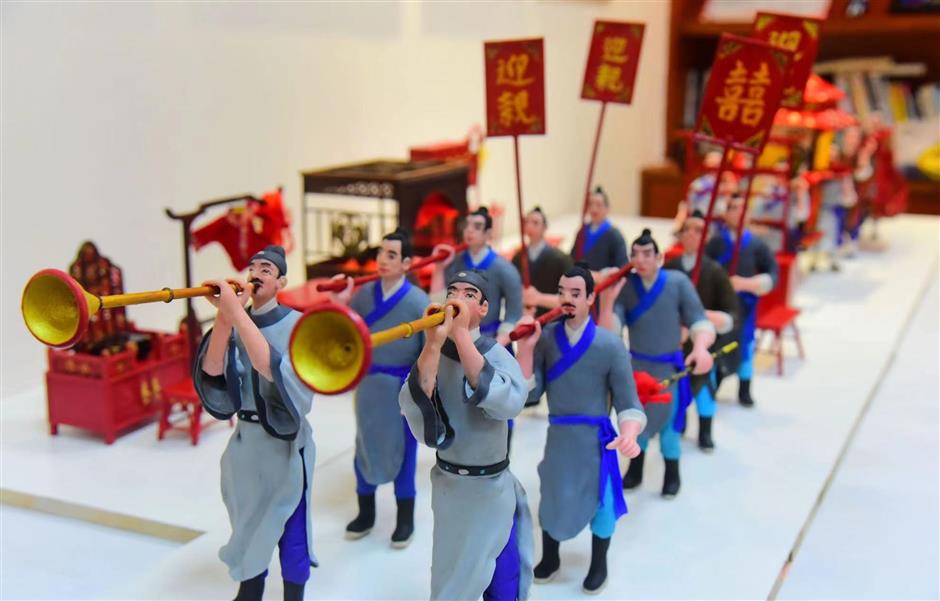 A full model of the shili hongzhuang depicts the procession carrying dowry for the daughter of a well-off family in China.

The tradition dates back to the Southern Song Dynasty (1127–1279) when Emperor Gaozong moved the capital to Lin'an, today's Hangzhou, after the northern half of China fell to invading Jurchens who established the Great Jin (1115-1234) in the occupied territory.

On his southbound trek, Gaozong survived with the help of a village woman. To return the favor, he promised to marry her if he came to the throne but he couldn't find her when that happened.

So, to honor his lifesaver, the emperor granted local people the right to use dragon and phoenix patterns at the wedding. The story added some legendary color to the dowry culture and also reflected women's wisdom and bravery.

The practice gradually developed into the shili hongzhuang tradition and prevailed in Zhejiang for centuries.

The bigger and better the dowry, the higher the status their daughter would have in her new family.

Today, some Hangzhou locals still prepare vintage-style red utensils on the wedding day, creating an auspicious vibe and praying for happiness. Every item is painted with red lacquer, traditionally considered auspicious in China.

Though such a spectacle has faded with history, Shen and Ding's work in Shangcheng District provides a snapshot of ancient traditions. 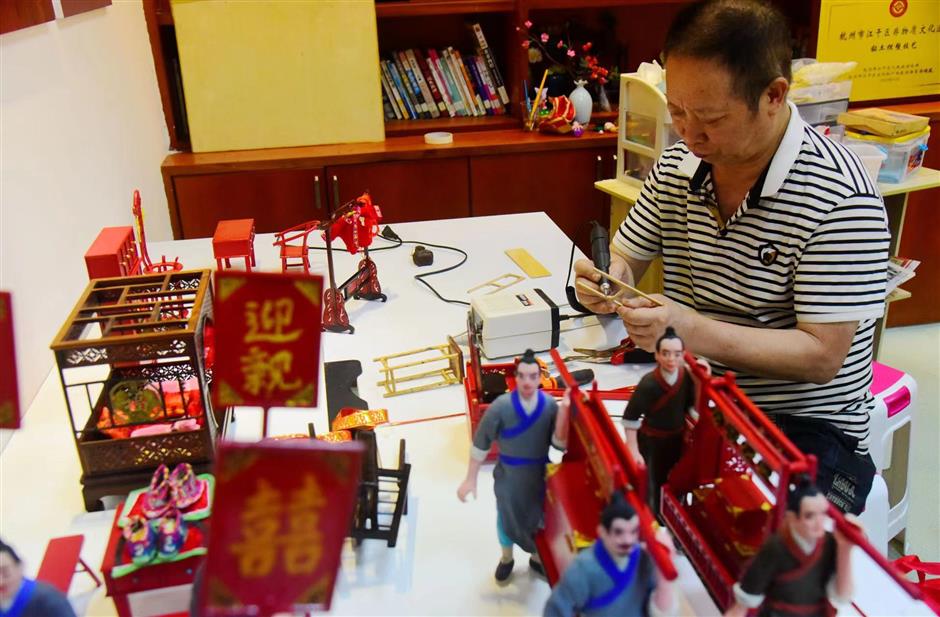 Shen Qiufa works on a model of the shili hongzhuang in his workshop.

"The work took us months to complete. We researched the backdrop of the dowry, Southern Song costumes and lifestyles to recreate the centuries-old scenes as realistically as possible," said Shen. "I hope it can help popularize such ancient culture among younger generations."

Shen, 75, designed the wooden dowry and Ding created the figurines. The highlight of the traditional wedding was the bridal sedan, in which the bride would sit and be carried to the bridegroom's family, followed by porters carrying her dowry.

The sedan chair was often engraved with auspicious floral patterns, legendary stories and mythical creatures. The whole surface was painted with gold and red lacquer, with tassels hanging from the windows.

In olden times, only a wealthy family could afford such a stylish sedan chair, because the rent equalled the price of tons of rice.

Wooden furniture accounted for a large part of dowries, from beds, wardrobes to shelves and tables. The items were often carved with dragon and phoenix patterns, a rarity in Chinese folk culture as the two mythical creatures were exclusive to the royal family.

Among the prepared dowry items, some less significant vessels typified the parents' careful consideration of a daughter's life with her new family, for instance, a pair of offspring buckets. One was used in which to bathe the newborn, while the other collected donations of milk from other mothers if the new mom didn't have enough to feed her baby. 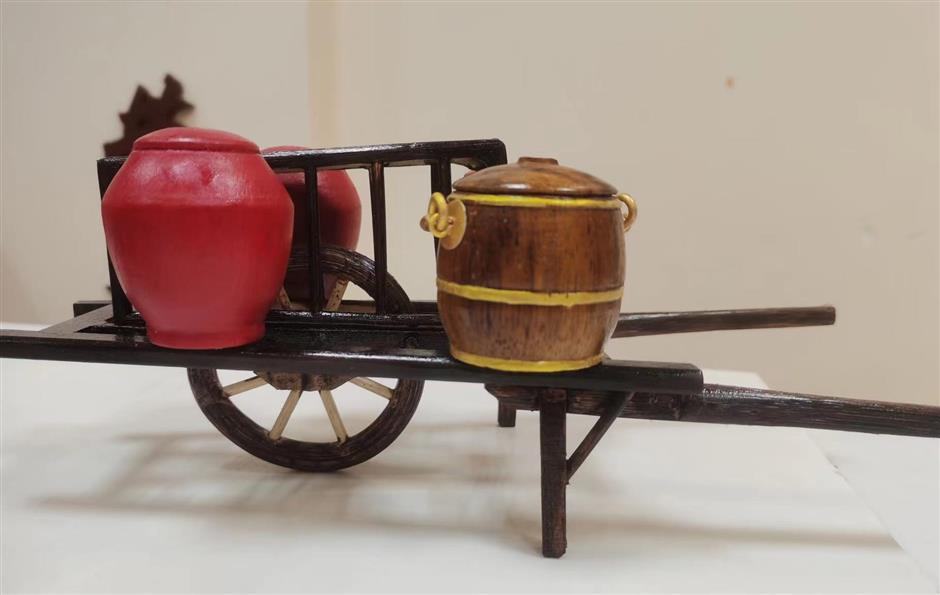 Offspring buckets are considered an essential item of the dowry.

"In modern times, people no longer use such wooden buckets, but locals still prepare an offspring barrel on the wedding day. Otherwise, the parents would be considered as being without etiquette," said Shen.

The canopy bed was at the majestic center of the dowry. It featured wooden posts at the four corners holding in place the bed board and a suspended canopy. The bed was often intricately decorated with auspicious motifs, particularly relating to fertility, longevity and a happy marital union.

When a bride's parents invited craftsmen to make the bed, they would host a ritual to worship ancestors and immortals, praying for thriving offspring. That testified to the bed's importance in dowry culture.

"About 20 years ago, I planned to make the shili hongzhuang. Today, the goal was realized," said Shen.