Luthiers and the finest handcrafted guitars in China

It is believed that some 30 million Chinese people own a guitar, and its popularity is growing by the day.

Gao Jun, an independent guitar-maker who sold a guitar for an astounding 2.8 million yuan (US$384,420) in 2017, had planned to present his latest product at this year's Luthiers Show, which concluded last Sunday in Shanghai, but broke the front of the instrument before the start of the event.

In China, there are only about 100 known independent guitar luthiers, and many of them are still struggling financially, according to Miao Shuichang, organizer of the Luthiers Show. 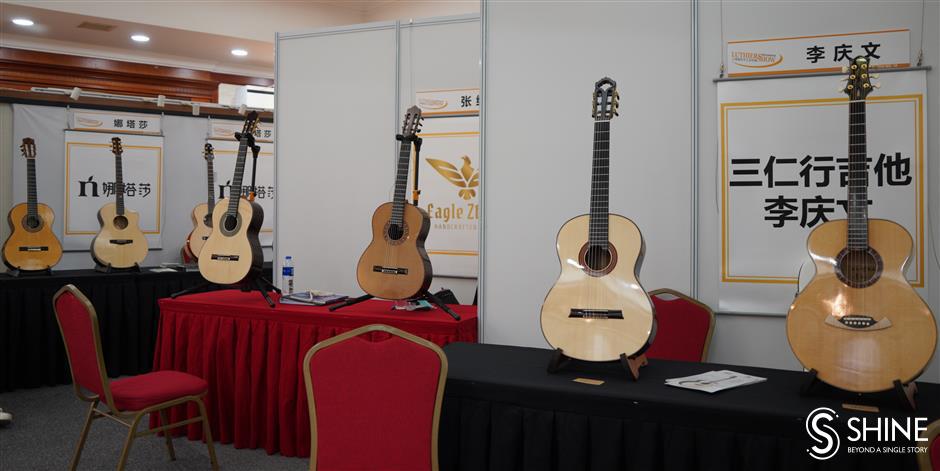 The luthiers' craftsmanship is of the highest caliber in the industry, and they want a platform to display their instruments.

Miao launched the exhibition in 2019 as independent luthiers need a place to share their knowledge, get their business known, and make deals.

In addition to the Lutheris Show, Miao owns Qituo Guitar, a handmade guitar business, on the Bund. He has spent the last few years searching for and purchasing handmade guitars in Japan, Europe and the United States.

Due to the lengthy process of making a guitar, the luthier must be knowledgeable about the guitar's inner structure, have extensive knowledge of different woods and other materials, and also know about other techniques such as engineering, physics and acoustics.

A good luthier ends up spending three to five years mastering the skill. Guitar enthusiasts find the show a haven to share knowledge and experience. 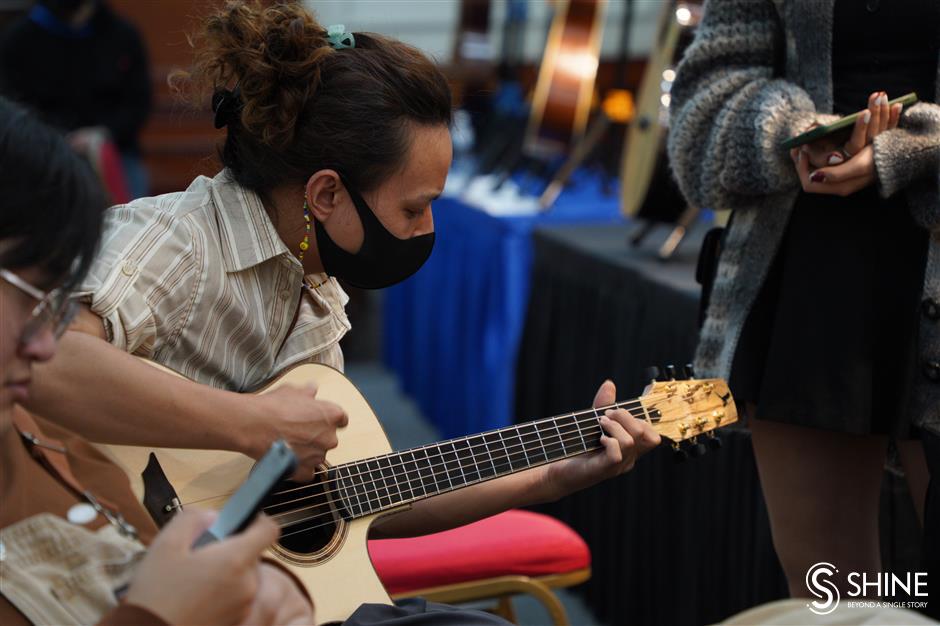 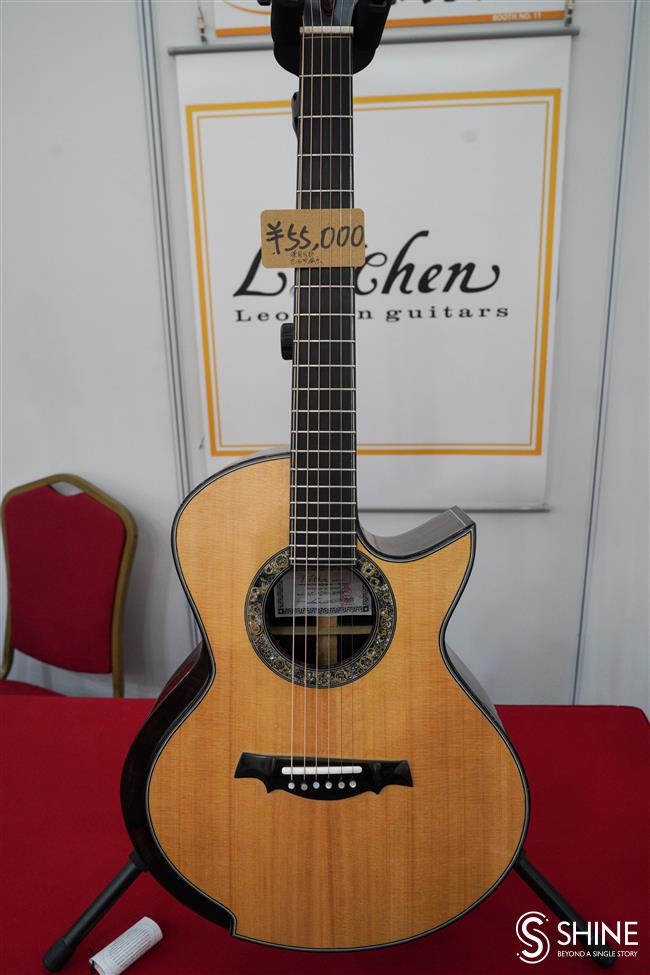 Zhang Weiyi, owner of the namesake guitar brand, hails from Zigong City in Sichuan Province. In 1993, he started working in a violin factory. The factory began producing guitars in 2003, and Zhang has been working on classical guitars since then. He won a gold medal at China's first handmade guitar competition in 2019.

At the beginning, Zhang was only able to produce a dozen guitars on his own. Now he heads a team of six workers and churns out hundreds of guitars per year. Even though the number of orders has grown, Zhang is still obsessed with making every part of the guitar by hand. 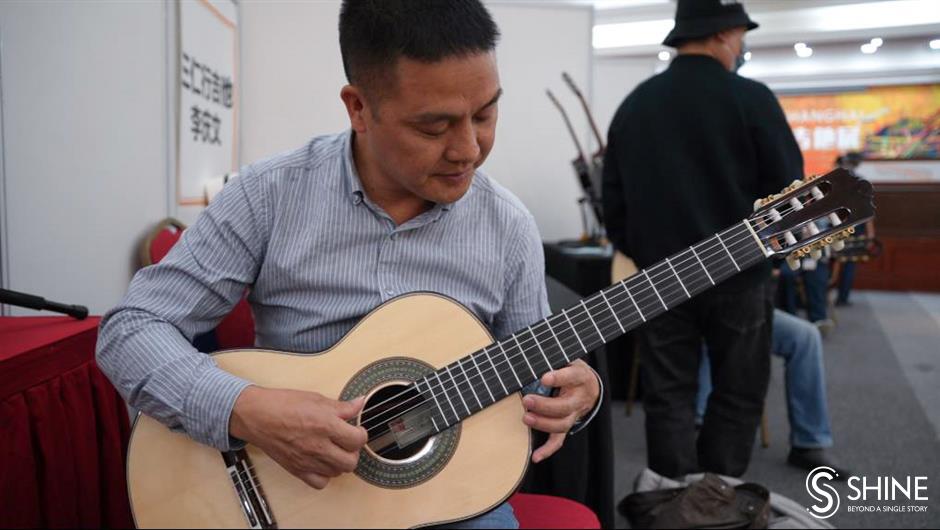 Zhang Weiyi plays a guitar he brought to the show.

Zhang primarily sells his guitars to classical guitar majors, enthusiasts who can afford handmade guitars, and overseas buyers from the United States and Europe.

Wang Jueye, a Suzhou-based luthier, has been making guitars since 2015. Wang, a long-time enthusiast, learned how to make guitars on a popular Chinese guitar forum in 2010, and later acquired more skills from a Taiwan luthier.

Wang needs roughly 200 hours to complete a guitar, working about 10 hours per day. 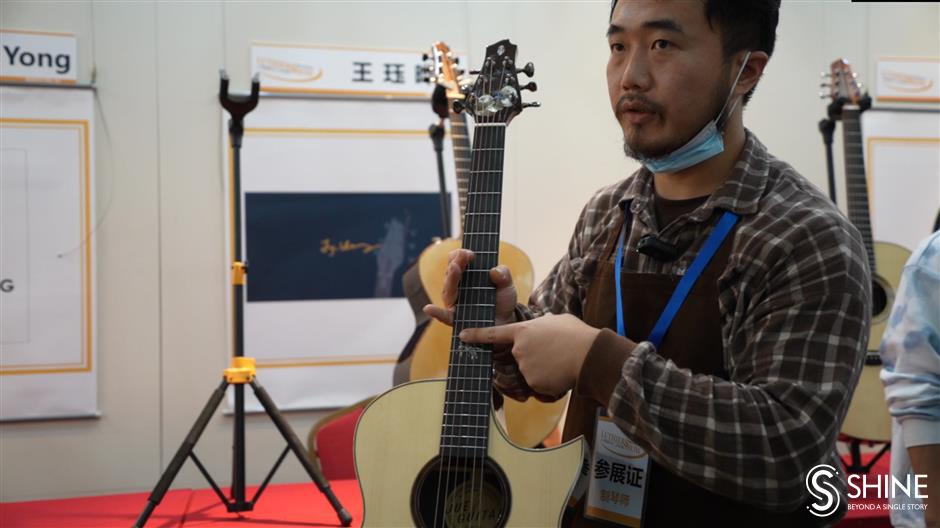 Wang talks about his Bao guitar. The name comes from Chinese guobao, or national treasure.

Swedish classical musician and luthier Johannes Moller owns a guitar line, Sueño. At this year's show in Shanghai, he brought a guitar with uneven frets. Moller said that using an even temperament gives the guitar a more precise pitch.

Moller came to China about a decade ago and was amazed by the richness of the Chinese culture and music.

"Chinese music is really fantastic. It's very melodious, and a lot of tunes are also heartbreaking. The music fits the guitar very well," he said.

Moller noted, however, that despite their excellent skills, a significant number of young Chinese guitarists play Western or Japanese instruments. He intends to create more fusion songs, half Chinese and half Western, regardless of the particular scales and sound textures of Chinese instruments such as the pipa (Chinese lute), the guqin (seven-stringed zither) and other traditional Chinese instruments. 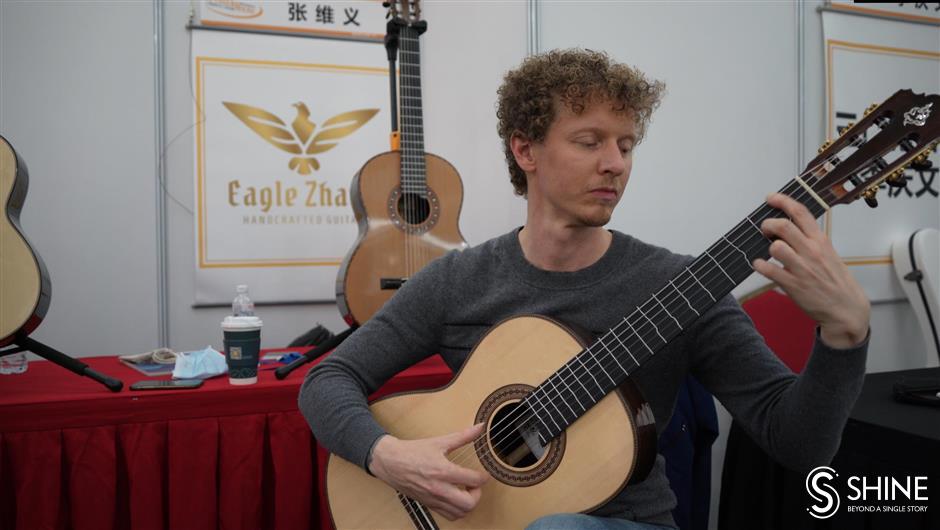 Moller plays a classical piece on the guitar with uneven frets.

Moller has his own cultural development company in Guizhou Province, where he produces his Sueo guitars. It's not just about the guitar; it's about building culture and bridging that gap.

Compared with what he saw when he first arrived in China, Moller believes that the skills of Chinese guitar-makers are advancing rapidly. He notes that what makes guitar-making in China different from anywhere else in the world is how quickly the luthiers and manufacturers learn, gather knowledge, digest, adapt and grow.

As China is currently the largest exporter of guitars, perhaps in another 10 or 20 years, the landscape of Chinese guitars will change dramatically, he said.

Moller, like many other luthiers, thinks that making a perfect guitar involves a lot of trials and errors and is shrouded in mystery, but it is still an interesting process.

"We really don't know because wood is so mysterious and how it acts. When combining the wood pieces, it's very intuitive. You just keep hypothesizing and trying. Eventually, it will work," Moller said.

Li Ziye, a freshman at a Shanghai art college, was blown away by the show's atmosphere. She felt she learned a lot from the professional guitarists, and it was a fun place to hang out with friends.

Li has been studying guitar since high school, and her family has always encouraged her to pursue her passion and bought her an expensive handmade guitar. Li Ziye plays a guitar at the show.

Qi Xinnuo, a senior high school student, began learning guitar as a third-grader in elementary school. He tried on numerous guitars at the Shanghai show, and it has given him an idea of what his next guitar would be.

The ambitious young man spends practically all of his free time practicing guitar and hopes to make it into the top 20 of a national guitar fingerstyle competition in the coming years. 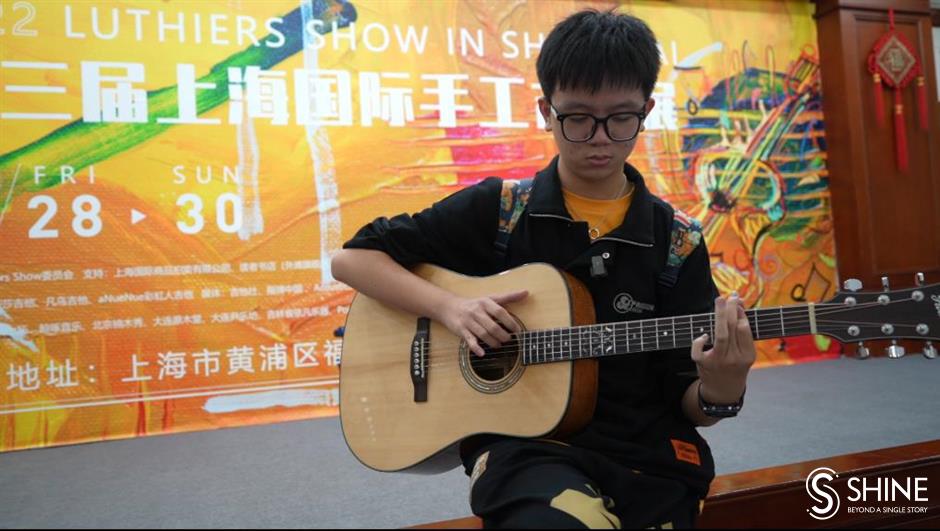 ﻿
Special Reports
﻿
Luthiers and the finest handcrafted guitars in China
Dutch sculptor displays a unique sense of angle and perspective
The inaugural SHCM International Musical Theater Festival raises its curtain in Shanghai
Exhibition imposes 'material' on porcelain sculpture
2022 Hear The Colors: China as seen by young Hungarian artists
A showcase of Chinese poetry in Western classical music
Timeless qipao integrates the best of China and the world
Contemporary artists tell 'Five Stories About Us'
Chinese jeweler to exhibit at 5th CIIE next month
Iranian actor Arash Estilaf hopes flags of his country and China 'will wave together forever'
EXPLORE SHINE