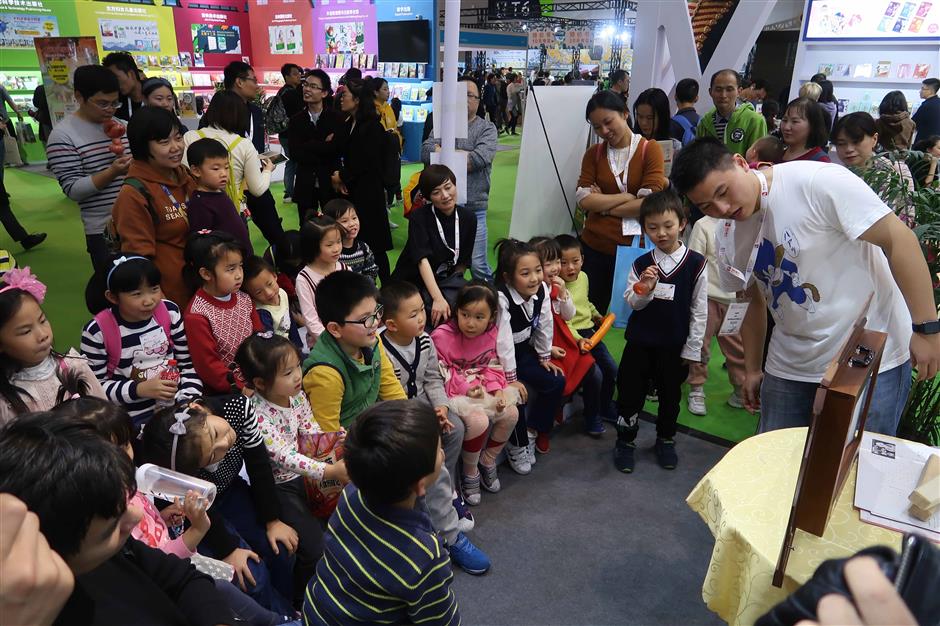 Children at the recent book fair in Shanghai are enthralled by one of the activities during the festival.

He picked Chen Jiatong’s “White Fox’s Dilah” because he liked the idea of animal transformation, common in Chinese folk tales but not so much in European ones.

The fair, first held in 2013, has attracted an increasing number of international participants attracted by Chinese children’s books.

Many expressed surprise at the rapid growth of the children’s market in China.

In 2016, it grew by 28 percent. For some small overseas publishers, China is now their biggest export destination. The growing  middle class and the removal of the government’s “one-child policy” are two of the major reasons behind such growth.

The market is not only larger, but also more sophisticated and demanding, attracting the best of international best-sellers.

“My Chinese publisher just bought 20 books from me. It seems in China they prefer series of books to single ones, so I’m now doing more series,” Spanish illustrator Canizales told Shanghai Daily at his book launch.

The Chinese publisher spotted a poster he had illustrated at last year’s Bologna Children’s Book Fair, and quickly sealed a deal for six books. That inspired Canizales to look at China for the first time and he brought more of his books to the fair after he was invited by the publisher for a book launch.

The market has also pushed domestic authors and illustrators to be more internationally-minded as they are now in competition with books from all over the world.

“I never deliberately make my book more international or more characteristic of Chinese. I write a novel when I’m inspired, and it may naturally be very Chinese or very international, which might not even be features contradicting each other,” he said.