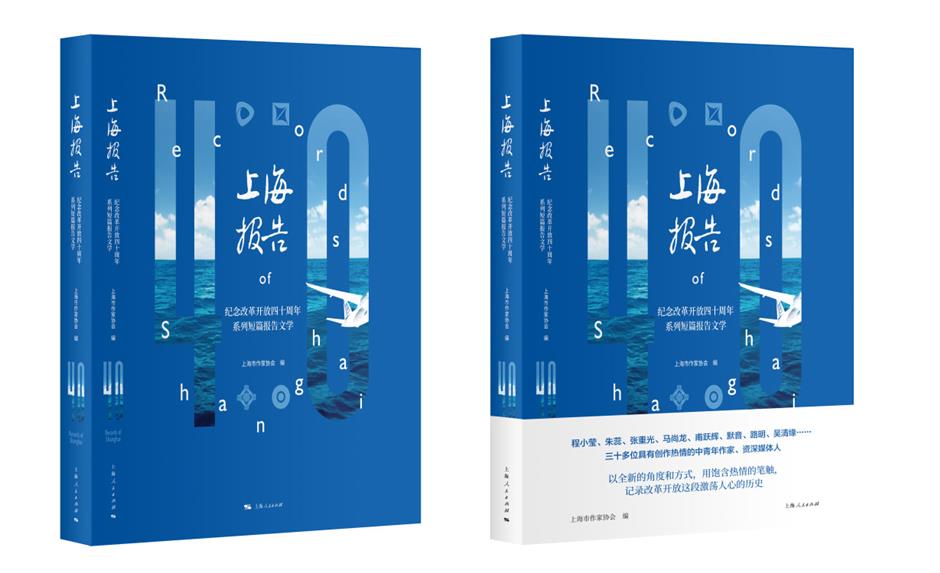 While realistic movies and TV dramas caught China’s imagination last year, writers are also turning their pens to the struggles and stories of individuals, as a part of the glorious grand picture celebrating the 40th anniversary of the country’s reform and opening-up policies.

“Records of Shanghai” is an anthology of 40 short non-fiction pieces based on interviews with dozens of locals, who helped build the city’s industries. Thirty-five authors, from Shanghai Writers’ Association, took a year to painstakingly put it altogether.

Each story, between 5,000 and 8,000 words, reveals new details or fresh perspectives of the city, including its first metro line, the free trade zone, its port and the progress toward an environmentally friendly city, among other things.

Several of the contributions come from young writers, born either in the 1980s or 1990s. Like their young readers, they are not so familiar with the city of the 1970s and 1980s, and are more intrigued about the vivid details than formal reports.

“Quite a few writers picked out stories of ordinary citizens. It was amazing to see how the tedious tasks of everyday life are behind every big achievement the city has reached over the past 40 years,” said Chen Si, one of the contributors of the anthology in her 20s.

She interviewed an overhead crane operator at Shanghai International Port Group, who had witnessed the rapid development of the city’s international port in his seemingly boring and repetitive job.

“The changes in people’s daily life often reflects more about the big picture. For example, you can find a lot from a grandmother’s book about the prices of groceries over the past 30 or 40 years,” said Wang Weisong, the publisher of the anthology.

“And these details are more encapsulating and closer to readers.”

Cheng Xiaoying, another contributor of the anthology, was a textile factory worker in the 1970s at a time when a lot of local factories, including the many textile ones, were located at the industrial zone on Yangshupu Road in Yangpu District.

The writer said the time he spent working in the factory more than 40 years ago is still vivid today and has inspired her to write a piece about the textile industry in Shanghai.

“We had these little corners upstairs, the culture and entertainment space where we, the workers, gathered to watch TV or read pamphlets. A memory full of passion that is hard to imagine today,” the author recalled.

“It is nostalgic and it is also intriguing to track those moments and recapture how the ordinary workers thought about their work, their lives, the city and the country they live in.”

Other stories in the collection includes a young engineer in his 30s, elderly neighborhood committee aunts, who helped with day-to-day troubles in the community, race car field workers who tried all means to keep a record of car racing since 1980s, and many other ordinary residents who had a real-life story to tell.