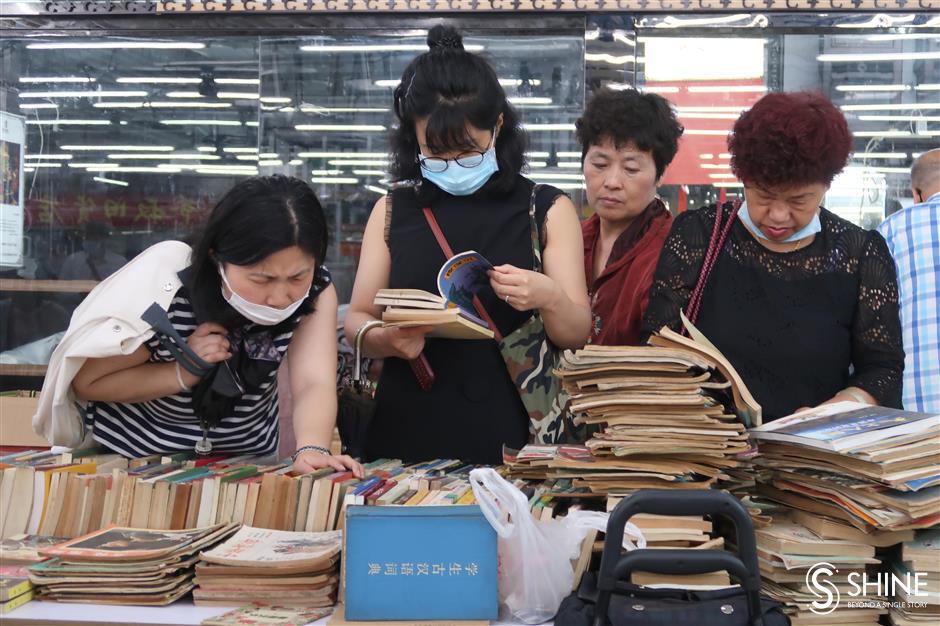 Readers pore over used books at a Sunday book fair in Fumin Pearl Gem City at Yuyuan Garden, but customer numbers are falling.

The Fudan Used Bookstore is just a small part of the city’s used book market, which is now shrinking with the growth of e-books, changing tastes and the trend for “fragmented” reading — reading bite-size nuggets on social media. The cost of renting premises and fewer customers also make it hard for bookstores to survive.

Those that remain are struggling to find ways to make a living.

This year, the Wenmiao (Confucian Temple) Used Book Fair, held every Sunday since 1993, closed for construction work. When it will reopen remains unknown.

Some retailers have moved to Yuyuan Garden, where they share stalls with those selling crafts and antiques.

On Sunday mornings, sellers can be seen on the fourth floor of Fumin Pearl Gem City at Yuyuan Garden. Although they are surviving, it’s a long way from the prosperity of the Wenmiao fair.

“We moved here at the end of April. Now it’s just a beginning and there are far fewer customers than we used to have,” said Xu, who had been trading at the fair for more than a decade.

“Many people don’t know we are here now and every week we have former book fair customers who have come for the first time,” she said. “At the beginning, only three to four book sellers moved to this place and later the others followed. But under the impact of coronavirus, this year our business is really poor.”

She said earnings from the stall could no longer cover her living expenses so she opened a store on the secondhand book website kongfz.com.

Qu Yongfa, 69, a collector of books published during the Republic of China (1912-1949), said he had been a regular visitor to the Wenmiao fair. It was his favorite place to find the books he was looking for.

In his collection of more than 80,000 volumes, there are many rare books and those recording the city’s development.

“In the early stages, most of the Wenmiao booksellers were native Shanghainese. But now the majority are migrants from other provinces and they have more costs. Now it’s very difficult to be a full-time used bookseller with the rising cost of rent and labor,” Qu said. 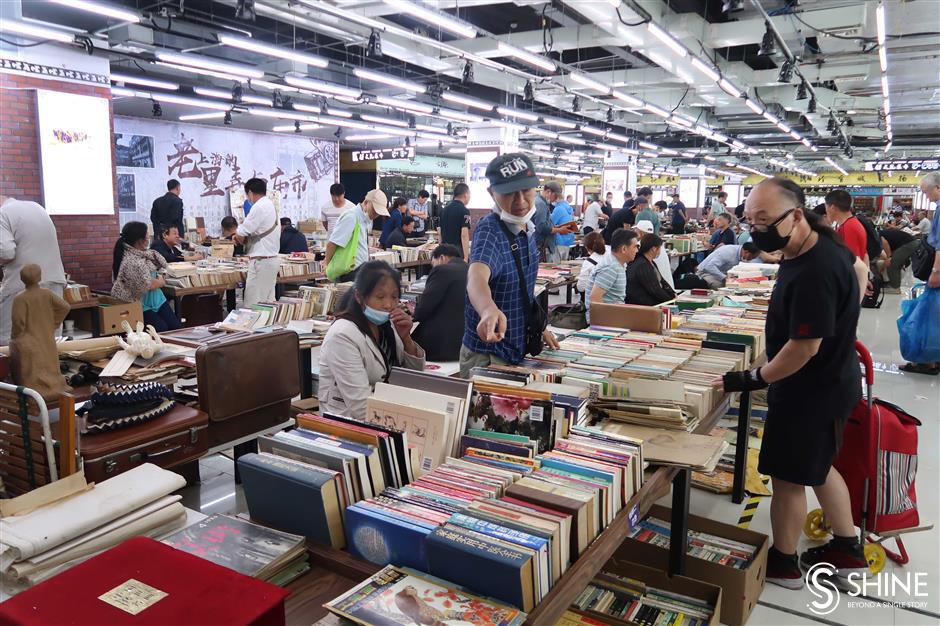 Yao Ming, 57, owner of used bookstore Xiyizhai, or “Room of Mystery,” has moved his store twice before settling down on Jingyu Road E. in Yangpu District. Now he only has a tiny store to serve regular customers and nearby residents. Most of his trade has moved online.

Yao moved from being a book lover to selling books. “I like collecting old books. But my family had to move and asked me to drop my books. I felt very sad and when I took the books downstairs, where a stamp and coin market was located, I found there was someone selling used books. I hoped my books could also find owners who love them so since then I became a bookseller.”

He started with a stall but as turnover increased, he decided to open a store. But a decline in business and the high rent are problems.

However, he keeps his store going because of his love of books and thanks to profits from his online business.

Zhu Fengtao, owner of Xiaozhu Bookstore, is lucky to receive support from the Pudong government and Tangqiao Subdistrict. Although his store is still closed due to coronavirus, he has opened a WeChat account to promote and sell books.

He’s also involved in charity work by connecting people online and making donations to poor areas where books are in demand.

Zhu, a former employee at the Shanghai Used Bookstore on Sichuan Road N., became the first person to open a store at a Metro station in the 1990s.

However, the arrival of e-books made people lose interest in physical books and Metro bookstores gradually closed one after another.

Zhu’s store at Metro Line 4’s Tangqiao Station was a success but his lease ended in December 2011.

During the pandemic, the subdistrict waived his rent.

“My store is one partly for public welfare and every year many books are donated or presented as gifts instead of being sold. I hope all these books can find an owner to cherish them,” said Zhu.

In September 2017, Zhu organized a “Xiaozhu Bookstore Festival” outside the Lancun Road Station and offered some 10,000 books for free. But he asked the readers to bring them back after finishing them so other book lovers could read them.

The festival later became an annual event and Zhu also introduced some new activities such as Chinese riddles, traditional opera and book readings.

In April 2018, Zhu signed agreements with 23 neighborhood committees in the subdistrict and set up sites for residents to borrow books.

Each year he sorts and selects books to donate to distant mountainous areas stricken by poverty.

“Since I have a lot of materials and documents about the history of Shanghai. I plan to establish a small library in the future for people to refer to,” Zhu said.