The little shop that keeps passion for reading alive 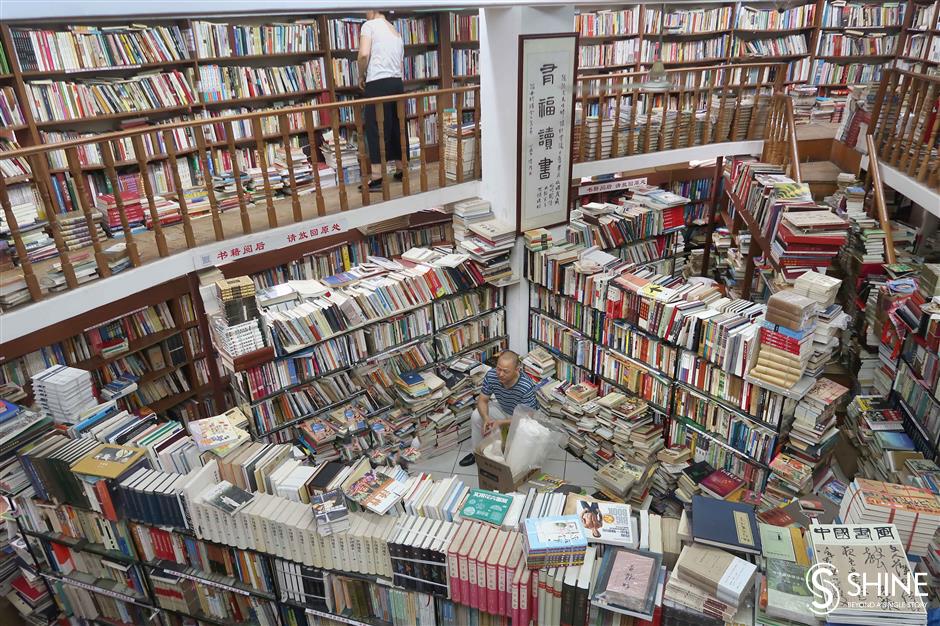 Piles of old books line the crowded floors of the Fudan Used Bookstore, a popular haunt of students and academics from nearby Fudan University and Tongji University. 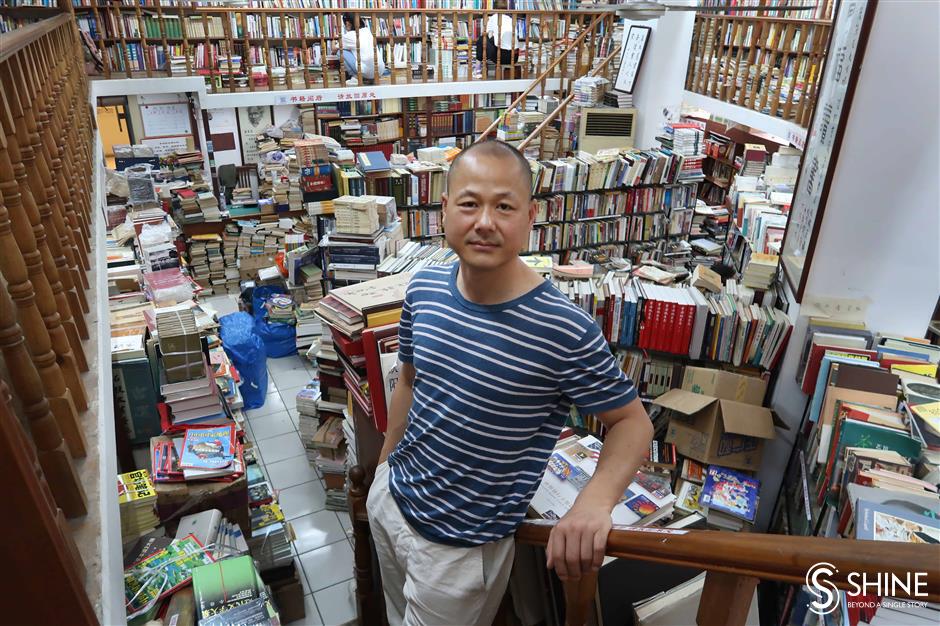 Used bookstores, with their musty smell and tantalizing invitation to browse dusty secondhand volumes, have always been favorite haunts of booklovers.

The Fudan Used Bookstore, located on the second floor of a nondescript building on Zhengsu Road in Shanghai's Yangpu District, is no exception.

Piles of old books line the crowded floors in a space no more than 70 square meters.

The bookshop, operated by owner Zhang Qiang, has welcomed students and academics from nearby Fudan University and Tongji University — and even had a fair few foreign customers — in its nearly two decades of operation. It is among the last of the used bookstores in Shanghai.

The bookshop holds more than 50,000 titles. It has weathered the coming of modern, sleek bookstores, the electronic book wave and even this year’s novel coronavirus pandemic.

Much of its “life force” can be credited to Zhang.

Born in 1977 in the countryside of Jiangsu Province, Zhang grew up in a family of booklovers and was a little bookworm in childhood.

“My father is a sailor who loves reading books,” Zhang said. “Once when he returned from a trip, he brought home two large wooden boxes full of books. Influenced by my father, I became addicted to reading. When I was a second grader, I read my first whole book — “Xue Gang Fan Tang.”

The classic novel is about the Xue Gang Rebellion in the Tang Dynasty (AD619-907), when the grandson of a patriotic general plotted to avenge his murdered family and dethrone Empress Wu Zetian.

Zhang said he loved the legendary heroes in the book. He then went on to read other classics, like “Romance of the Three Kingdoms” and “The Water Margin.”

“At that time, I couldn’t understand everything the books were saying, but I was mesmerized by the tales,” he said. “Even today, when I open a book, it feels like I’m entering a new world.”

Since his family was poor, Zhang’s mother didn’t allow him to read at night because that would have required burning a kerosene lamp, which was costly. But since many of Zhang’s books were borrowed, he had to finish them as quickly as possible. He soon solved the problem by connecting a battery to a tiny bulk and read at night.

After marrying, Zhang and his wife were busy making a living, but he still managed to find time for reading.

“If there was no fiction handy, I would open up a dictionary before going to bed,” he said. “And when I looked at newspapers, I didn’t just read the stories. I even read every word of their ads.”

Zhang never had the opportunity to go to college. After graduating from high school in Jiangsu Province, he began working as a substitute teacher and electrician. In 1999, he and his wife arrived in Shanghai in search of better-paying work. The coupled settled near Fudan University. 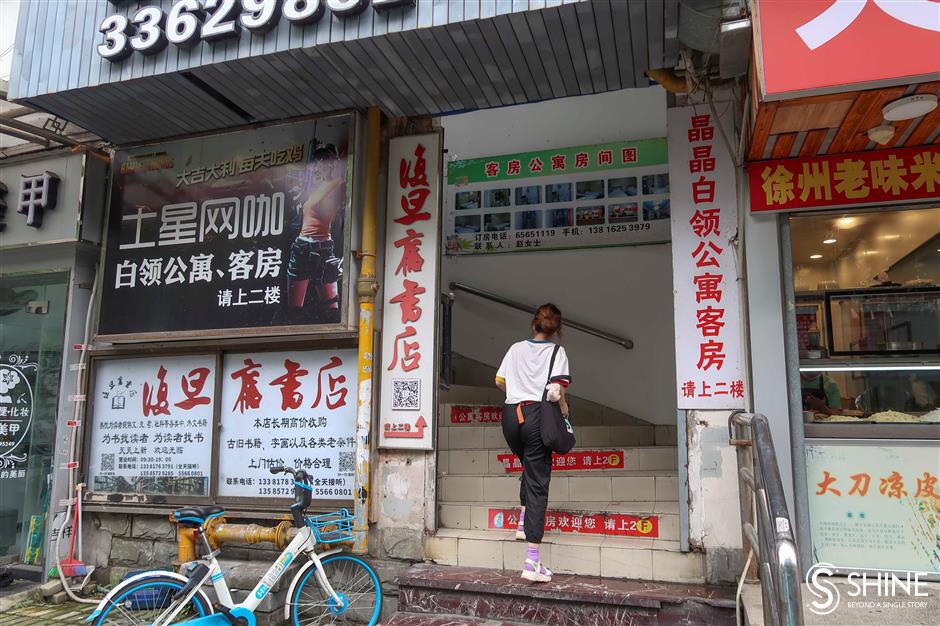 The store is in a nondescript building on Zhengsu Rd.

One day, when Zhang was passing by a scrapyard near a Fudan dormitory, he saw many great books on the scrap heap. Though he only had about 30 yuan (US$4.29) with him, he bought several books at a price of 2 yuan per 500 grams.

After that, he opened up a street stall on Guoding Road, trying to find buyers for the books he picked up.

“In those years, there were many secondhand-book buyers,” he said. “Every day, I rode a bicycle to carry three large bags of books to my stall, and the books were bought by students even before I had a chance to lay them all out on a mat.”

He clearly remembers seeing one female student, who was troubled with her graduation thesis and spotted the reference book she had been trying to find for a long time.

“Her expression touched me,” Zhang said. “She was so excited. It seemed that she would burst into tears at any moment.”

That encounter made Zhang realize how meaningful the work of booksellers is.

By day, Zhang worked at the bookstore of China Science & Technology Book Co on Zhengsu Road.

“I suggested to the manager that we spare a corner in the store for used booksellers to rent shelves and sell their books,” he said. “The manager agreed.”

Zhang himself rented a bookshelf.

He often went to the Confucian Temple at dawn, where used booksellers gathered, and returned to the bookstore by 7am to sell the books. After the bookstore closed at 9pm, he switched into a street vendor again.

The used-book corner of the store had its heyday when tens of used booksellers rented shelves there, and the area was crowded with customers, Zhang said. But later, the business started declining, and the company was forced to shut down the bookstore.

Zhang persuaded the company to keep the bookstore’s office for him, which he renovated into the current Fudan Used Bookstore. 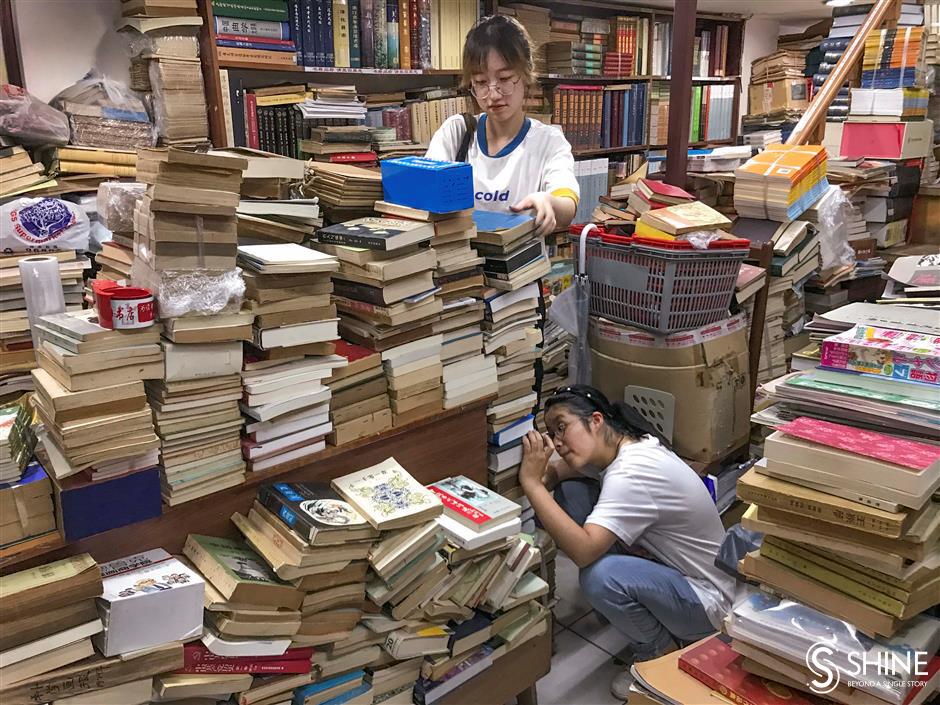 Customers search through the many books on offer.

He designed the interior himself. Since the office ceilings were higher than those of standard rooms, he had workers build a mezzanine connected to the main floor by a wooden flight of stairs.

The shop today is a higgledy-piggledy trove of volumes.

“The books are not categorized by author or genre because we want readers to enjoy the unique thrill of wandering in the store and finding treasures on their own,” Zhang told Shanghai Daily.

“Nowadays, many people go to a bookstore solely for one book that they need or want,” he added. “Or maybe they come to the shop without necessarily wanting to read a particular book. But if they browse, they might find something that intrigues them. That’s what we want to see.”

Perhaps thinking back on his own childhood, Zhang feels sympathy with poor students who come to his shop.

“You can tell if they’re poor by a single glance,” Zhang said. “When they show great interest in a book but look worried about the cost, I often offer them the book at a lower price. As a bookseller, I do want to make money, but I think profit can never compare with a true passion for reading.”

He has also cooperated with Fudan campus organizations involved in donating books to underprivileged areas of China.

A calligraphy piece hanging on the wall of the shop was a gift from Professor Zhang Weiran of Fudan’s history and geography research center. The characters say: “Reading is a kind of happiness.”

More than just book sales, Zhang said he believes that a bookshop is also a social milieu where people of like interests can meet.

He recalled a high school student who was an avid reader of military books. The teenager returned to the shop several days after buying books and returned them to Zhang. He said good books should never belong to one person and he wanted to share them with others.

Each old book is a fragment of history. Even for one title, every publication may vary in edition and packaging. Sometimes, there are even annotations in the margins made by readers or a photo or letter forgotten amid book pages.

Zhang and his wife have collected secondhand books from all over the city and, sometimes, from other provinces. They have developed a network of resources from their customers and developed friendships with them.

Zhang said he once visited the home of an elderly man suffering from Alzheimer’s disease. The family had decided to sell his book collection. Although the man wasn’t fully cognizant mentally, he still remembered how much the books meant to him.

After all the book were packed, he took a few back, not able to part with them.

“Though I’ve paid for all the books, I didn’t mind his retaining a few,” said Zhang, who recognized in the old man a fellow collector and lover of literature.

Many bookstores in Shanghai buckled under the coronavirus pandemic. Zhang said he collected more books than he sold during the outbreak. To store the excess stock, he rented a warehouse on Chongming Island, adding to his overhead costs.

His online book sales saved the day, eking out enough revenue to cover part of the loss. 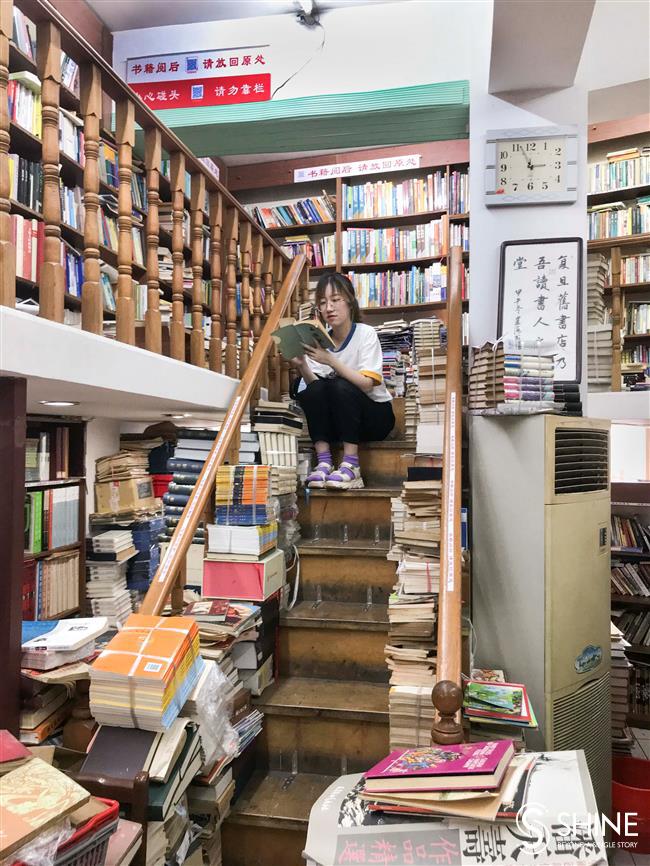 Many people blame e-commerce for the decline in brick-and-mortar bookstores. Zhang sees reasons beyond that.

Many younger people are more interested in superficial, material things, he said. Some scholars no longer immerse themselves fully in their work, producing little or no results. Some students care only about numeric scores, losing the desire to read and learn. And many publishing houses prioritize profit over quality, publishing works that are lucrative rather than inspiring.

The trend among modern bookshops is to open a café in a corner to boost income and enhance the atmosphere. Although Zhang said he understands the financial difficulties of these stores, he believes a bookstore should stick to books.

“Many people ask me why I don’t sell coffee,” he said. “I like coffee, but I won’t sell it in my store. One day, if I can spare some space in the store, I might consider providing free coffee or tea to customers.”

He added, “Maybe one day brick-and-mortar bookstores will disappear, but I think books and libraries will always remain. I just want to do my part in promoting the reading culture.”

On Friday afternoon, a 22-year-old woman surnamed Ren came to Zhang’s shop. She told him that she loves used books because they almost invariably retain some trace of previous owners. She bought several old Western books from the store, among them a Shakespearean play with an old, lost library card tucked inside.

“It’s sad but true that it’s hard nowadays to find this kind of bookshop,” Ren told Shanghai Daily. “I noticed this store when I had a meal nearby, and I couldn’t stop myself from wanting to check it out.”