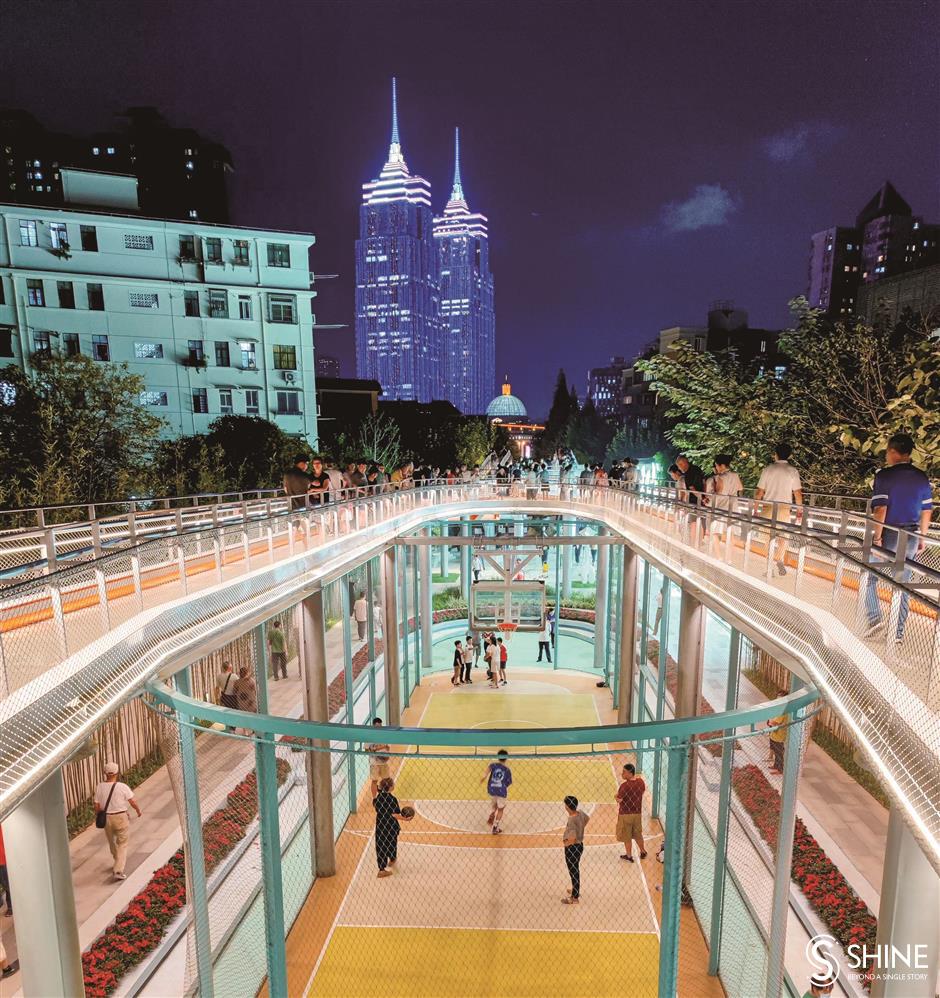 A park created from what was once Shanghai's longest railway wet market has become a key attraction of the ongoing Shanghai Urban Space Art Season 2021.

It represents Putuo's answer to the theme of the event: "15-minute Community Life Circle: People's City."

The high line park stretches for a kilometer through the community between Caoyang Road and Zhongshan Road N. It was once Caoyang Railway Wet Market, a narrow and long market with pollution and noise problems for the nearby residents.

The arched canopy resembles the shape and color of the ceiling of the former market, which was shut down amid the complaints from the residents in 2019. A basketball court and service station have been built in the underground space to make up for the shortage of activity space in the old neighborhood.

Exhibitions, salons and art installations will be launched at the park to enrich the cultural life of the residents.

To answer the call of Shanghai's then Mayor Chen Yi to "serve the working class," Caoyang Community began to be constructed in 1951 as China's first workers' community.

After seven decade, the former pride and glory of what was once the city's "model community" has faded away, replaced by out-of-date neighborhood designs, inconvenient life facilities and a poor living environment.

To restore its former splendor, the community has renovated its history museum, a popular reception site for foreign national leaders and guests, as well as launched a major facelift to improve the living condition for the more than 100,000 inhabitants.

It is part of a series of campaigns in Putuo to celebrate the 70th anniversary of the community this year, as well as mark the centenary of the Communist Party of China. 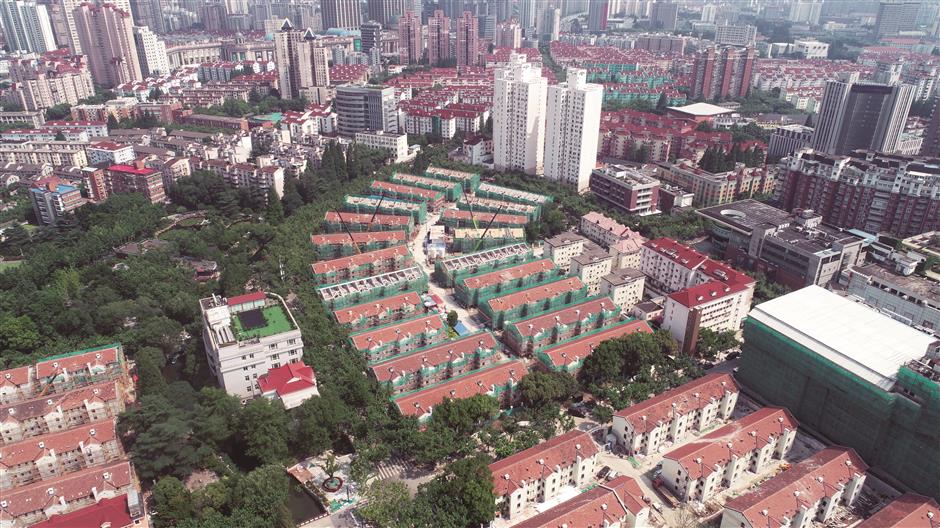 Renovation is underway in the Caoyang No. 1 Community to improve the local living conditions.

The Caoyang Community History Museum on Huaxi Road has reopened to the public after a four-month renovation.

The museum, initially opened in 2013, has received more than 10,000 visitors from both home and abroad. It was listed as one of the city's patriotism education bases in 2015.

The community, covering some 2 square kilometers, sprung up in September 1951 as a home for model workers, a forerunner of other workers' communities built nationwide to accommodate a growing workforce during a period of rapid industrialization.

As the first "new community" in Shanghai that opened up to the outside world, it has received more than 300,000 people from over 150 countries and regions. High-ranking visitors include former US President Richard Nixon and other national leaders.

The Caoyang community subdistrict has established a foreign affairs office to be in charge of receiving foreign guests.

The grand reopening of the community museum is marked by a new exhibition on the second floor recalling the former bittersweet life in the community. Many traditional local appliances, such as old-style radio, bicycle, refrigerator, clock and sewing machines are displayed along with historical photos taken over the past seven decades in the community.

The nostalgic exhibition showcases the overwhelming changes of the community, as well as the life of Shanghai citizens, said Bao Chuchu, an official at the museum.

"The renovation has enriched the collections of the museum as well as optimized the exhibition," said Bao. "Visitors can serve as the owner of a popular store to better experience the former life in the community."

The Lanxi Cooperation Store, once the most popular shops in the neighborhood, has been restored in the museum. Visitors are allowed to enter the counter to fully experience the former iconic site of the community.

Electronic devices and interactive scenarios have been added to the exhibition hall on the third floor, which review the history of the community with exhibits, photos, videos and archives.

The former exhibition ended in 2018, so the renovation extended the timeline to showcase the latest achievement of the community, said Bao. The Government Online-Offline Shanghai portal, for instance, the city's unified e-governance platform, has been showcased, along with the elderly care services and digitalized community construction.

The portal offers more than 3,000 online approvals, which has been set up across the community service centers at the community. About 60 government departments have offered 3,197 services at the one-stop platform.

The elderly care section includes the smart dining, transport and services as well as home appliance control that are being promoted at the community.

A large number of visitors, especially students, have visited the reopened museum during the summer holiday. The visitors are guided to learn about the great changes of the community in education, science and technology and health care, as well as the spirits of the model workers.

"I've learnt the profound history of the community, which deepened my affection for the community," said Zhang Leyan, a student of the School Attached to Shanghai Caoyang No. 2 High School.

Meanwhile, the flagship service center of the community has been combined with the museum. The expanded building not only shows the history of the "cradle of modern workers," but also offers all kinds of services to the residents.

As a highlight, Shanghai's first training center for Party secretaries of neighborhood committees, known as the "community prime ministers," was unveiled in the center.

The Innovation and Practice Base aims to improve the social governance capabilities of the grassroots Party chiefs with lectures from community officials and case studies of all kinds of community issues.

In China, all urban communities have neighborhood committees that serve as the grassroots arm of authority. Their importance came into sharp focus in Shanghai during the transition to citywide garbage sorting and recycling earlier last year. More recently, they played a dominant role in enforcing health and safety rules during the pandemic.

Nine community chiefs, including Zhu Guoping, Party secretary of the Hongchu neighborhood committee in Changning, were appointed tutors at the training base in Caoyang.

The practices of Caoyang mainly focus on its ongoing campaign to create a "15-minute community-life circle" for residents as part of the citywide campaign.

The community serves as one of the key sites for Shanghai's biennial urban space art season, sharing the practices of local neighborhoods.

The city's first smart cab-hailing screen, for instance, has been launched at the Caoyang Community, allowing residents to call taxis by pressing a button or simply scanning their faces on a screen.

The service, together with the taxi-hailing app "Shencheng Travel," was initiated primarily to help the elderly who may not be adept at using smartphones.

More than half the residents at the community are over 60 years old, according to Zhang Lei, deputy director of Caoyang Subdistrict.

During the art season, locals and tourists can learn about more such practices from model communities by visiting the neighborhoods, taking in the community artworks and talking with residents.

Fifteen neighborhoods, including Caoyang, have been selected for renovations, primarily public spaces and social governance. Education, culture, health care, senior care, sports, recreation and employment in these communities have been greatly improved.

More than 1,500 households, including many former model workers and their descendants, have been temporarily relocated. By the end of the year, they will move back to their brand-new apartments complete with modern facilities.

The planning, design and construction of the neighborhood represented the most advanced concept of modern communities. The houses with red roofs and white walls were covered by trees and flowers.

"We were among the few local communities that had gas and tap water at that time," Pan recalled. "My mother said she would smile even in her sleep after moving into the house."

However, as the population aged, the high-rise buildings which were once a source of great pride have become a source of distress.

Walls have cracked while the wooden floors creak and are plagued by termites. The stairways are crammed with the inhabitants' commodities. The shared kitchens have become oily and dirty, while residents have difficulty in enjoying a warm bath in winter.

"Without revitalization, the profound history of the historical community might be forgotten along with its aging population and facilities," a designer for the renovation project said.

Shanghai built 18 "workers' communities" in the 1950s but many are in poor condition now.

The renovation project at Caoyang aims to become a pilot for other local workers' communities, according to the subdistrict.

The additional third floors will be rebuilt to be in harmony with the original features of the buildings. The appearance of the structures will be preserved as its old residents remember them. Some textile elements will be involved in the exterior decoration to showcase the "worker's culture" of the community.

The residential committee officials helped to negotiate with the construction company to help restore part of Zhu's interior after renovation.

"We'd like to keep every brick and tile for the historical community," said Chen Zhongwei, an official in charge of the project. "The historic, cultural and art values are expected to be retained to the largest extent."

The district government plans to welcome the residents to move back with gongs and drums, just as at the ceremony for their parents when the community was initially built.