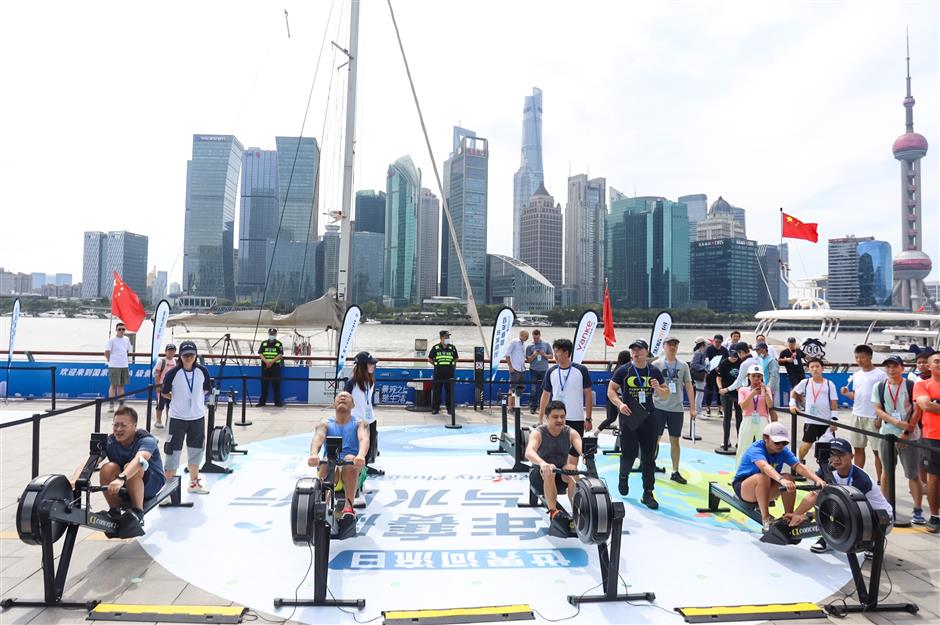 A sports carnival themed rowing competition has been launched on the North Bund waterfront in Hongkou District to mark World Rivers Day in late September.

The event, organized by Shenzhen-based Deep Dive sports company, aims to raise public awareness of water environment protection and promote rowing, a sport with a long history in Shanghai.

Dozens of amateur rowers from the Yangtze River Delta region and the local international community raced each other at the Zhiyang section of the North Bund. They competed on rowing machines and raced on the riverside, attracting a number of citizen and tourist spectators.

A special team composed of visually and hearing impaired people also took part in the event. Guided by volunteers, they competed in a relay race and experienced the rowing machine.

"The carnival is intended to encourage all walks of life to take an active part in sports activities amid the COVID-19 pandemic," said Wang Shi, the president of Vanke Foundation.

Nine rowing sports centers held similar carnivals in Beijing, Suzhou and Yangzhou in neighboring Jiangsu Province, Shenzhen in south Guangdong Province and Xi'an in northwest Shaanxi Province. The events at these subsites were livestreamed on a large screen on the North Bund in Hongkou.

"Rowing can become not only a popular sport but a healthy lifestyle for locals," said Feng Nan, the president of Deep Dive.

Shanghai was scheduled to become the first Chinese city to host the World Rowing Championships in October, but the event was cancelled due to the pandemic.

Rowing is yet to become a popular sport among local citizens, though the city has a long history of the sport, said Feng. 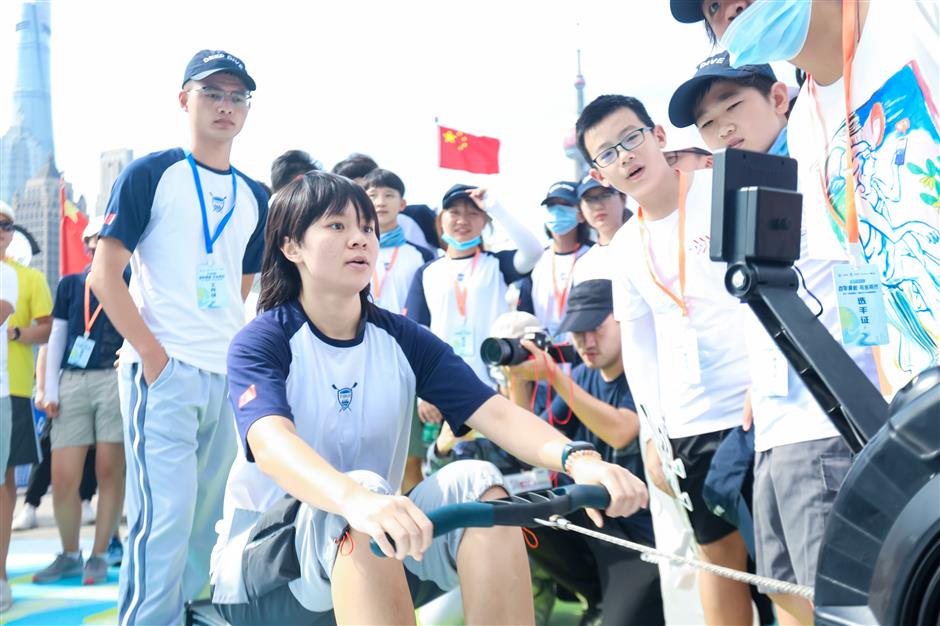 Citizens and tourists experience the rowing machine on the North Bund.

In May, an international rowing competition was launched on Meilan Lake to promote water sports among locals. More than 10 races for sailboats, canoes, paddle boards and model boats will be held every year on the lake which is currently mainly used for sightseeing. Training sessions will be held on the lake for both children and adults.

Rowing was once a popular sport along the Hongkou section of Suzhou Creek. The Shanghai Rowing Club was established in about 1859 for British settlers who came to the city after Shanghai opened its port to the world in 1843.

Although the original boathouse was demolished in 1989, the main building and an archway of the west wing have been preserved near the North Bund. The remaining building was built in 1905 in a style reflecting both Victorian and Edwardian styles.

The rowing club, along with the nearby former British Consulate and Union Church along the creek, has become a historical marker of early British settlement.

Also near the North Bund, the Huangpu Swimming Pool, a national training center built after 1953, was the cradle of China's first group of competitive swimmers who later coached many Olympic champions.

During the Suzhou Creek project, architects restored the original structures of the club houses, with steel shelving for climbing plants. The remains of the former swimming pool have been converted into another riverside café.

Hongkou, covering 23.4 square kilometers, has a profound sports culture and history, according to the district's sports bureau.

The Hongkou Football Stadium was originally built in the late Qing Dynasty (1644-1911) as Hongkou Stadium. It was rebuilt in 1999 to become the first professional football stadium of China.

The nearly century-old Hongkou Swimming Pool is the city's oldest. The pool, beside century-old Luxun Park, was built in 1922 and was originally named Municipal Council Swimming Pool. It was initially only accessible to foreigners in the concessions and Chinese citizens were barred from entering, which led to protests.

In 1928, the Municipal Council opened the pool to both Chinese and foreigners. The pool underwent its first major renovation in 1931 with a diving platform, springboard and slide being added.

Japanese invaders controlled and operated the pool in 1937. It was returned to the local government and officially reopened to the public in June 1949.

The pool receives an average of more than 100,000 swimmers annually, according to the group. Many renowned Chinese swimmers have trained there. 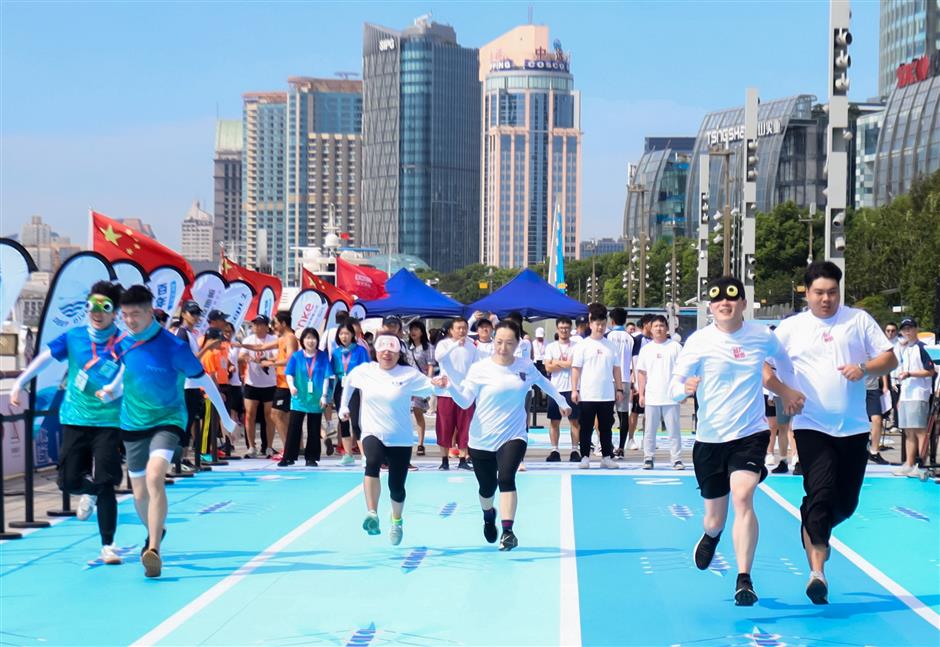 Sight and hearing impaired people race on the waterfront.

Hongkou will keep promoting various sports events, including rowing sailboats, canoes, paddle boards and other water sports, with the approach of the 2022 Winter Olympics in Beijing, said Zhou Jing, director of the bureau.

Along with the Lujiazui financial hub on the east bank of the river across from the Bund, the North Bund forms downtown Shanghai's "golden triangle." Riverside regions have already been transformed with greenery and paths.

The new North Bund will include a central business district with office buildings and commercial facilities. The riverside region, covering about 4 square kilometers, will be on a par with the Lingang Special Area and the Pudong New Area in the east.

It will become a "new engine" for Shanghai's future development with the tallest building in Puxi as well as well-preserved history and culture, according to the district government. 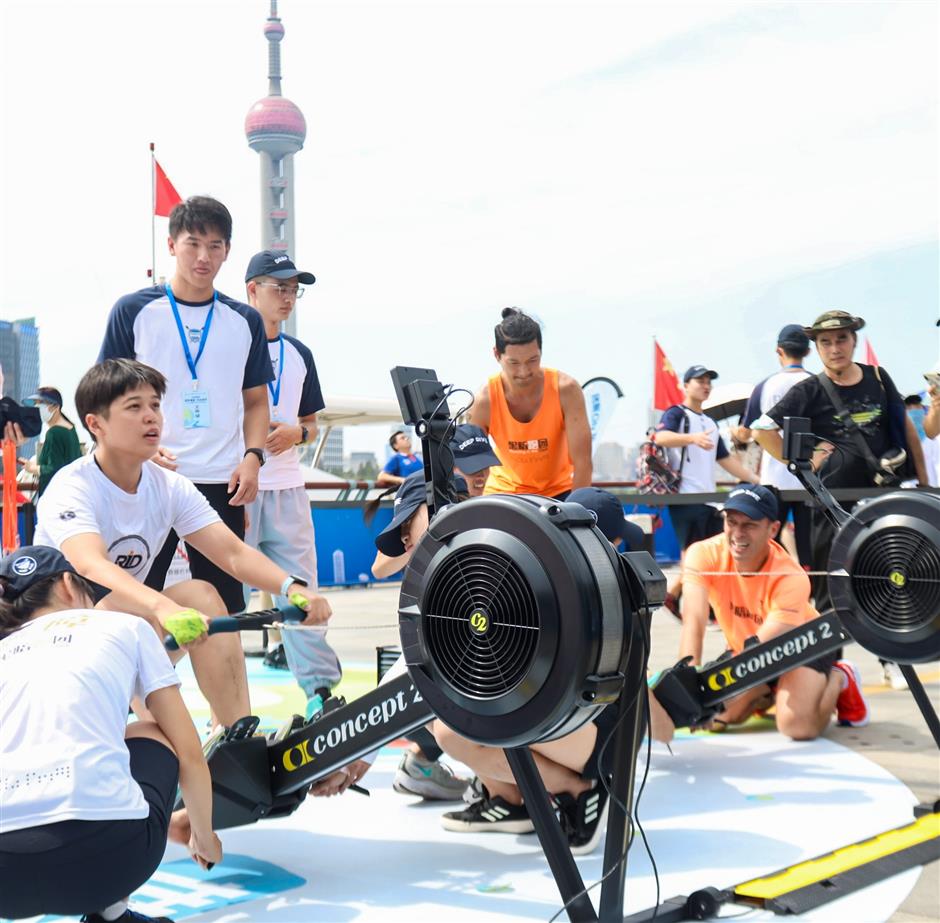 Citizens and tourists experience the rowing machine on the North Bund.