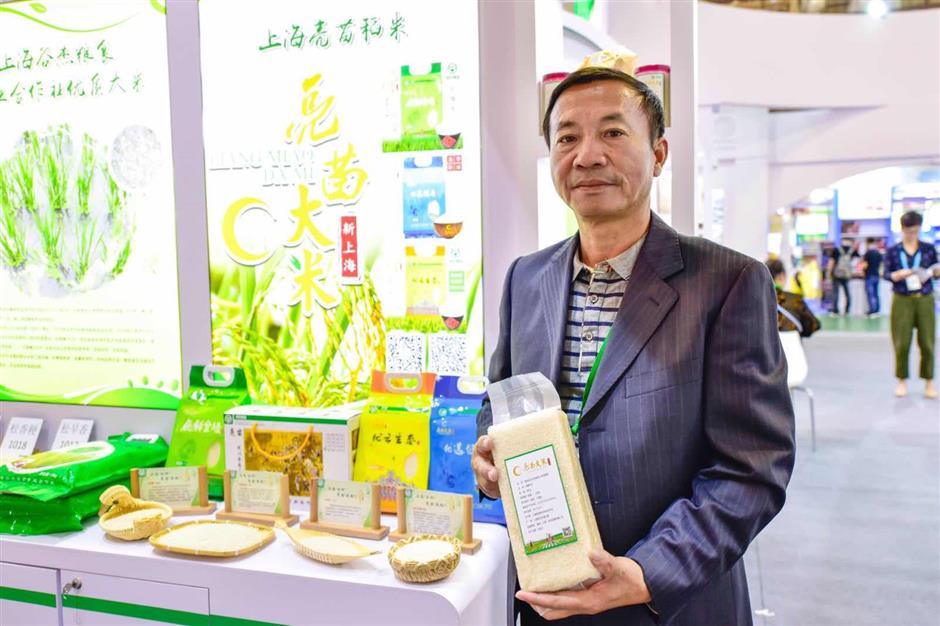 Sun shows the rice at a fair.

For many, the city of Shanghai evokes images of a bustling cosmopolis buzzing with traffic and flowing with business. Few think of it as a hub of rice production, yet here in Minhang District local brand recognition is on the rise.

Pujiang Liangmiao Co-op's latest batch has been on the market since September and stands apart from other brands in terms of quality. In fact, the co-op has won awards three years in a row, including gold awards from the annual China Green Food Exposition.

Sun Zhiliang, who heads the unit, has spent most of his life working on rice fields. He said farming is in his blood.

"When I first started, I remembered people always said that rice was good in northeastern China and I thought we could also do that in Shanghai," Sun said.

In the early 1990s, Sun worked on a farm in neighboring Fengxian. With China's reforms, he saw great changes take place, including the widespread use of advanced agricultural machinery and increased farming capacity.

These improvements motivated him to train to become a "modern" farmer, which he accomplished in part by obtaining a degree in agriculture, in 1996, from Shanghai Jiao Tong University.

Sun returned to Pujiang from the farm in Fengxian in 1999 when he was in his early 40s, and was determined to give modern farming his best shot.

He tested the planting of rice varieties on 100 mu of land, provided by the local government. His goal was to determine which varieties were best suited for Shanghai's soil and climate.

Utilizing his years of farming experience and knowledge of agriculture acquired from his studies, Sun was in a good position to make the co-op successful.

Sun said he never forgets the long years of hard work he put into his efforts. "I remember getting up as early as four in the morning and working through midnight when we were most busy," he said.

Sun recalled a time when he and the other farmers went all out to save their crop, the result of several months' effort.

"It was 2001. We rushed to collect tons of grain in the middle of the night because a heavy rain was on the way. It was spread in the open air to dry; we had no other choice but to move quickly, or all our work would have been in vain."

The current agricultural mechanization rate in Minhang is over 96 percent. Sowing, transplanting and harvesting can now be done by machine, freeing human labor, a major improvement from the past.

Meanwhile, the focus of the co-op has switched from growing rice to sales.

Competition is intense, particularly from northeastern China (Heilongjiang and Jilin are major producers) and from southern regions, which produce three rounds of rice a year.

But that doesn't deter Sun, who continues to produce high quality while catering to local consumers. He said that Shanghai residents prefer a moderately glutinous rice, which he is happy to accommodate them with.Liangmiao, along with several other co-ops in the region that have received governmental support to sell part of their rice under the brand name "Mintian Yuehe," roughly translated as "Pleasant Rice from Minhang Fields."

The co-op is also taking steps to sell on online supermarkets like Pinduoduo and JD.com. It has a three-year plan to structure its marketing, Sun said. In addition, live-streaming sales have been excellent, particularly during the pandemic.

Liu Xiaojing is a livestream broadcaster for the co-op. The agricultural industry is often not an appealing career option for college graduates, but Liu, who has a college degree, thinks differently. "It's a promising industry in China and is very much supported by the government. College students who work in agriculture benefit from subsidies," she said. "There are now many professional farmers with a promising future."

After consulting with Sun, Liu has decided to devote some broadcasts to the overall process of planting, harvesting and packaging – an immersive experience bringing consumers closer to the product.

The co-op provides direct delivery services and they are now experimenting with self-service e-payment machines that sell rice in residential communities. There are currently fifteen such machines in use, with plans for expansion. To date, they have been successful, and are a convenience to customers who can purchase whatever quantity they want.

Since last year, Liangmiao has organized field trips for students to visit their facilities and learn about the grain production process.

Sun said he believes such programs, which young people enjoy, is a way for them to appreciate how rice ends up on the dinner table, and is a good chance for the cop-op to market their high quality rice. "I hope these sorts of programs will be a way for people to know us better," he said with a smile.