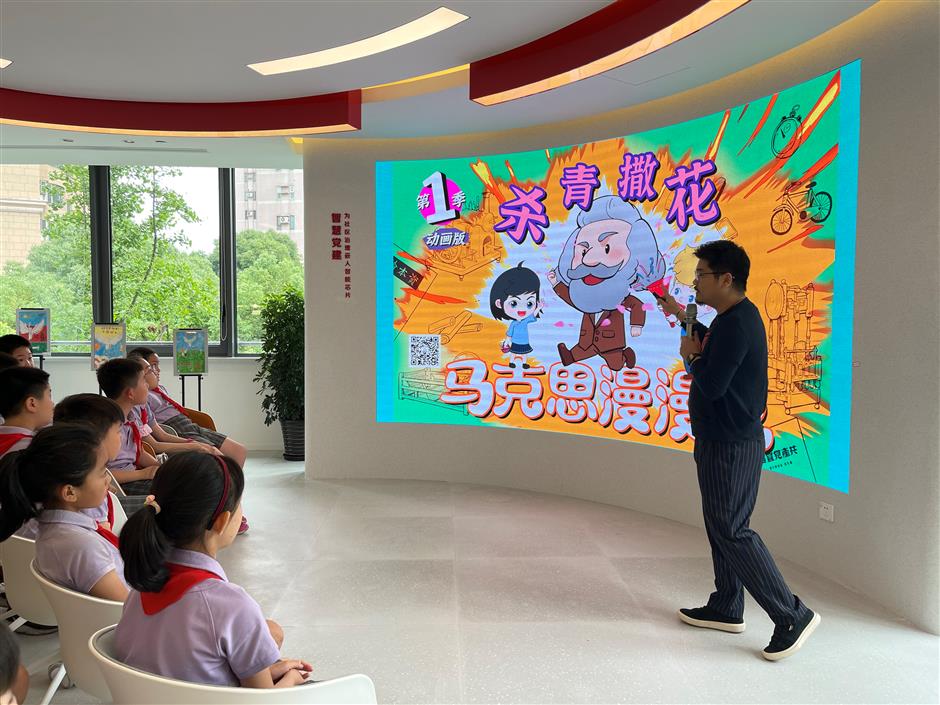 Xu Liang introduces the first season of the cartoon A Rambling Talk About Marx with students in Pudong New Area in June.

"I can say that no one ever published a cartoon to talk about the theories of Karl Marx in such a systematic way. We are the first," said Xu Liang with pride.

Recently, the first season of the animated series "A Rambling Talk About Marx" created by Xu's team has finished the update online. The cartoon received 6 million views via various online platforms in China and abroad, with more than 300,000 clicks for the first three episodes on Douyin, known as TikTok overseas. The results left Xu feeling very satisfied.

A graduate of the Shanghai Film Art Academy with a degree in animation, Xu has been interested in the artform since he was a kid. He still remembers that his first teacher was "Movie Magic," a television program about the visual effects of Hollywood movies that aired every Friday night.

"I was obsessed with it, and I knew it was what I wanted to do in the future," said Xu. "So when I saw SFAA had an animation major, I determined that was the way I wanted to go."

Animation combines comics and TV production. Although it was a relative new industry, the employment rate wasn't encouraging, as only about 10 percent of students in his major worked in this industry.

After graduation, he worked for a TV program package job, which included design and promotion, at the Haha Teenage Channel, wrote his first book about software development and participated in the design of the interior decoration of the China Pavilion at Expo in 2010. He then returned to the TV industry.

The opportunity came his way when a former classmate invited him to be part of an animation team. After the project, he set up his own company in 2017 and moved it to Jiading the next year. 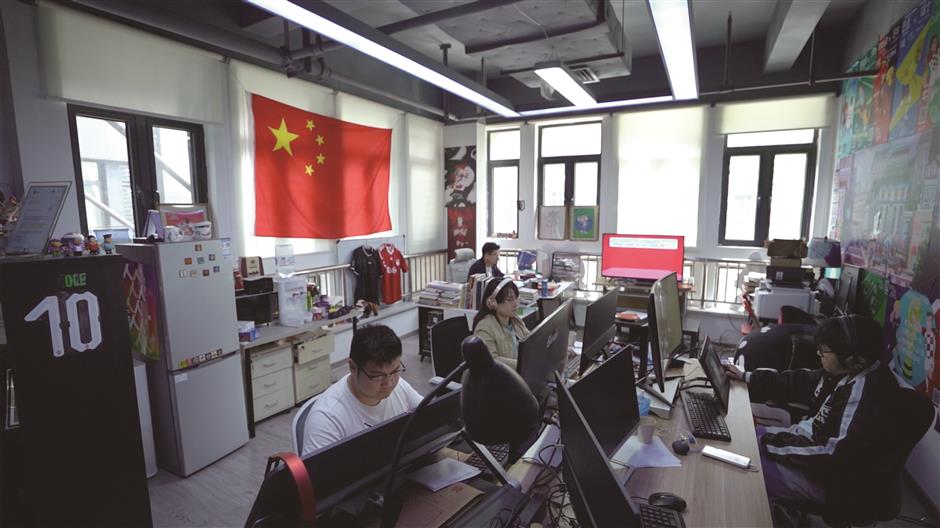 Xu and his team members work in their office.

"I had a lot of creative ideas that I wanted to make come true," said Xu. A childhood friend, Shi Yuanzhi, who is a teacher at the School of Marxism at Lanzhou University joined him and helped determine the company's vision.

Initially, they had two thoughts: learning about Chinese culture through foreigners' eyes and Marxism. In the end, they decided to draw a picture book about Marxism.

"Students in China are very familiar with Marx, but just for examinations. His theories aren't that simple. Also, we knew that there were conflicts about the theory, so we wanted to spread our voice to them, using a way that is easy to understand," said Xu.

But not everything went smoothly. There are many people working in the animation industry but profit margins are low. The investment circle is long, while the return rate is low. But earning money is not Xu's goal. Instead, he wants to produce something good for society.

In addition to drawing, humanities including history are his hobby.

"As the old saying goes, taking history as a mirror, I can see the rise and fall of a nation," said Xu. "After discussing, we decided to explain the basic rules of Marxism and then dig deeper, doing research and creating topics to show cultural self-confidence and spread them on our own. You learn how worthwhile it is to do such things."

Xu also credits his father, who was a physics teacher, on how to convey complicated theories to students in a simple and understandable way. So doing research was quite important, as he had to make sure what they wrote or drew was correct.

Xu also consulted more than 20 experts and professors from universities while researching Marx's theories.The first episode compares Marx with Adam Smith, which received the most views.

"My idea was to combine past theories and today's new knowledge to tell stories to modern people. For example, when you explain the monetary theory, of course everybody knows dollars, pounds and euros. What about bitcoin? In this way, we make it more interesting to people, telling them why bitcoin is not a currency," Xu said.

After determining the topics, they started on the characters' designs and plot writing, and finished before this year's Spring Festival. Then, the first season of 34 episodes of animation version was promoted, focusing on Marxist political economics.

Every episode lasts around 3 minutes, and the duration is most suitable for people to digest the new knowledge according to the research conducted by Xu's team.

"You can see an Apple advertisement in just 10 seconds, but you are completely attracted to it. That's what we want to achieve," said Xu. 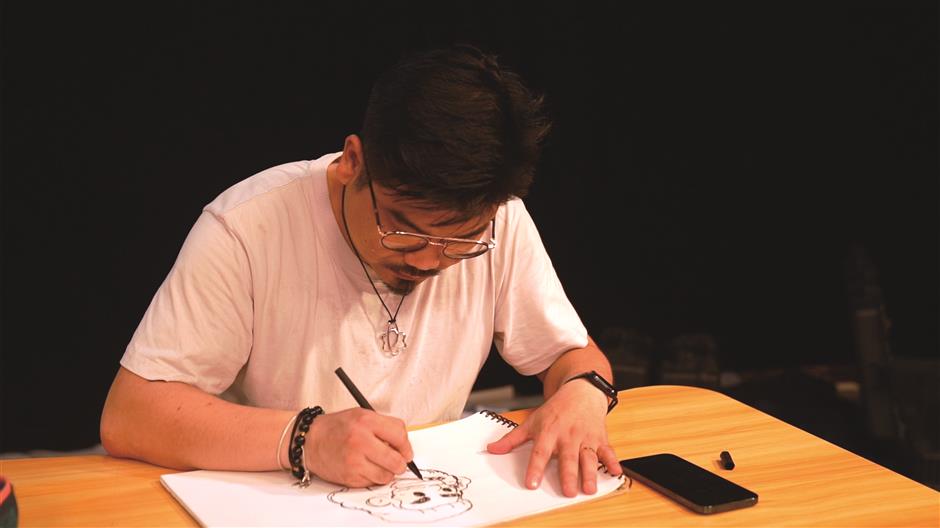 According to the plan, there will be four seasons of the Marx series. The second and the third will cover Marx's philosophies, and the last will focus on scientific socialism. There is a five-year plan for the cartoons and comics. An updated 2.0 version for the comic book is moving into gear, and the second season of the comic book will be published by the end of this year.

"We don't want to make fast-moving consumer goods, but a deep popularization of science and culture," said Xu.

This year, Xu also cooperated with Fudan University to promote a haipai (Shanghai-style) animated comic strip, including one about Chen Wangdao (1891-1977), the first to translate "The Communist Manifesto" to Chinese.

Quick update is another highlight of Xu's animation. "The hot issues you are talking about now will fade away in just a week, and new issues will show up. So we limit every chapter to 20 pages, so we can finish the update in just two weeks," he said.

"Many middle school students and those who are going to take entrance exams for master's degrees are so delighted to watch the cartoon we made. Some say it really helps them when going over the course. I'm glad to see the positive comments, but I also read some of the negative ones. I used to feel antipathy, but now I consider them to make the second season better."

Recently, Xu attended activities for third to sixth graders commemorating the 100th year of the founding of the CPC that touched on the history of the CPC, "red" spots in Jiading and Pudong New Area, where we're from and where we're going.

"We'll play a short cartoon first to raise their interests, as interest is the best teacher," Xu said.

He will continue to spread Chinese culture to foreigners, and the English version of the Marx cartoon will be available on YouTube in the near future.