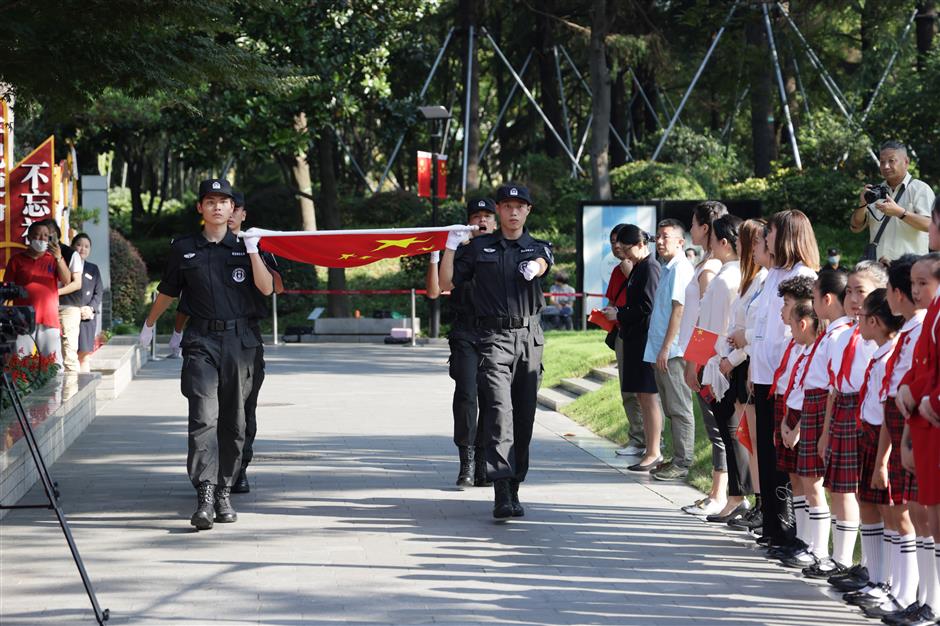 Police carry a national flag into the Memorial of the Second National Congress of the Communist Party of China on October 1 at a flag-raising ceremony to celebrate the National Day.

Jing'an evoked a mood of exaltation this month as it celebrated the 72nd anniversary of the founding of the People's Republic of China.

On October 1, local students, residents and office workers gathered at the Memo - rial of the Second National Congress of the Communist Party of China in the district to attend a special flag-raising ceremony. The ceremony kicked off at 8:30am in front of the site where the first CPC constitution was drafted nearly a century ago. People saluted the flag and sang the national anthem.

It ended with a children's choir singing the classic patriotic song "Me and My Motherland." People at the scene sang with them and waved national flags.

Participants get ready for a special running event organized by the local police.

After the ceremony, a special running event started from the site. Organized by Jing'an police, it attracted more than 30 participants. They started the 7.2-kilometer race at 9:30am.

The day before, the Memorial of the Central Military Commission of the CPC held a special event to honor martyrs and the armed struggle against reactionaries in the early days of the CPC.

The site was the location of a cloak-and-dagger story, where Peng Pai, Yang Yin, Yan Changyi and Xing Shizhen were arrested due to the betrayal of Bai Xin. The four were later killed.

During the event, soldiers presented flowers to the memorial of the four martyrs, and then local students visited the site to soak up the revolutionary stories. Also, Wei Zhongyi, son of Wei Zhiying, a PLA pilot and martyr, told students his father's story. 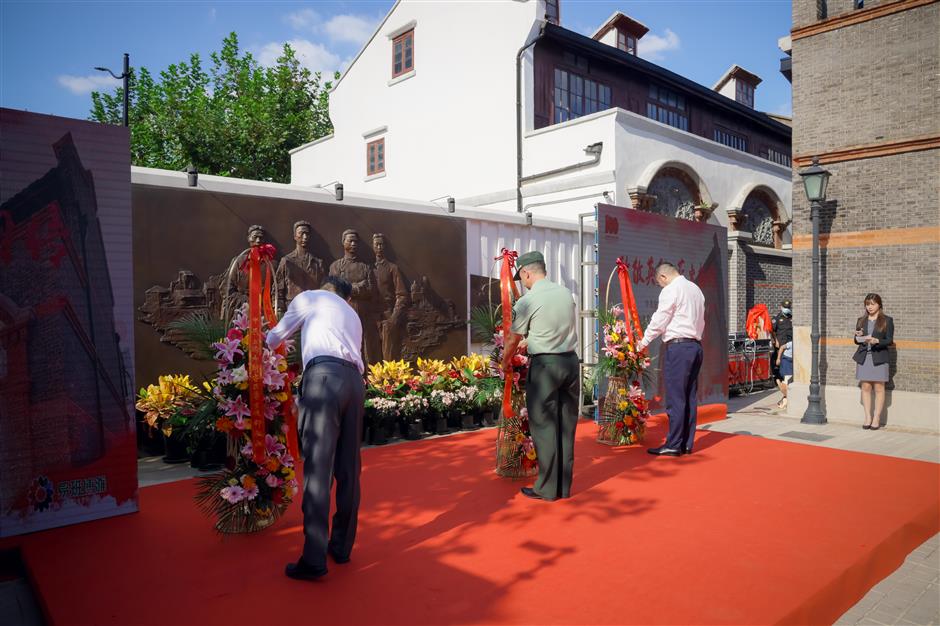 Flowers are presented to honor martyrs at the Memorial of the Central Military Commission of the CPC.

"In August 1970, my father's plane lost both of its engines during flight. He decided not to bail out of the crippled aircraft. Instead, he managed to make a forced landing. He tried his best to protect the state's property, but the accident disabled him," he said.

He added, "But my father didn't give up. Soon, he returned to his work as a pilot. However, on March 12, 1976, his plane's control systems failed to work when he was flying. It took his life."

Wei said his father has always been his beacon of his life, and he hopes countless martyrs can become beacons for today's young people.

During the weeklong National Day holiday from October 1-7, "red" patriotic songs were heard around Zhabei Park.

A group of retired citizens, known as the grey-haired chorus, came to sing classic "red" songs such as "I Love Motherland's Blue Sky" and "Me and My Motherland" in celebration of National Day.

Scores of "red" songs at Zhabei Park where local seniors frequent to sing together.

The chorus's leader is a retired worker surnamed Zhang. "It started 17 years ago, and gradually more and more senior citizens joined in. We gather here every Tuesday, Thursday and Saturday," he said.

A chorister surnamed Chen said she attended every week. "It's good for my health and mood. Also, I have made many new friends," she said.