Putuo District a magnet to overseas investors with comprehensive services

Putuo District in the northwest of downtown Shanghai has become a magnet for overseas investments with its intricate services and fine business environment, even amid the COVID-19 pandemic.

The downtown district has been promoting its slogan, "Putuo's people are reliable and get things done," a key principle for the government's conduct on all kinds of issues, especially the attitude toward overseas investment.

Putuo attracted a total of US$1.215 billion in foreign investment between January and September this year, a 15.2 percent increase from last year.

Jiang Dongdong, Party secretary of Putuo, said the government always acts as a "waiter" when serving companies, no matter where they come from or whether are big or small.

"We will offer the 'Putuo Services' no matter whether company officials speak English, French, Spanish, or any other languages," Jiang told PT Business, a magazine published by Putuo Commission of Commerce.

Thanks to the optimized business environment, 11 multinational headquarters have moved their bases to the district since 2020 amid the pandemic and complex international situation. The foreign sectors of Putuo's regional economy have strengthened rapidly and stably. 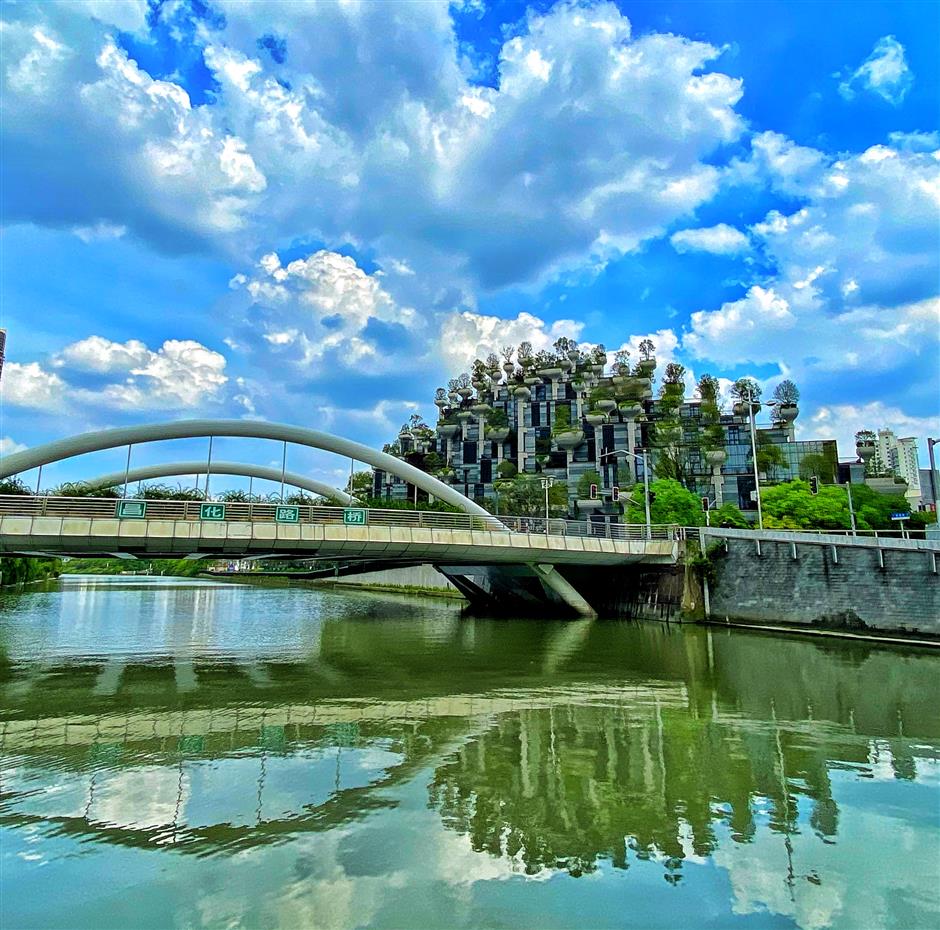 Tian An 1,000 Trees, a commercial and entertainment complex, is built along the 1,100-meter bank of Suzhou River in Putuo.

By the end of September, overseas investments to Putuo had exceeded the 2020 total. Over 90 percent of the target set by the district government early this year has been accomplished. Serving as the home for companies' headquarters has become one of the pillars for Putuo.

The district has been popular among all kinds of leading foreign giants, such as Schneider, Merck Sharp & Dohme and LS Electric. They've composed an integral part of the region's economy, he added.

The district's Party chief recalled many companies from abroad faced a tough period when initially entering the Chinese market, mainly due to the cultural gap and difficulties with starting up, talent attraction and office leasing.

The government must serve as a "waiter" during that time to help solve the problems, Jiang said.

"To answer calls any time, to handle issues immediately, to spare no effort to solve any problem as well as make people and companies feel relieved to live and develop in Putuo," Jiang elaborated on the service-based mantra of Putuo.

Putuo has also made it one of the top priorities on its agenda to improve the environment, since foreign investors and companies have high requirements for living and working conditions, according to the district government.

The district has penciled in an upgrade of its waterways and riverside regions, a plan to create additional parks and increase safety standards in old residential communities and improve its roads.

It aims to create "blue networks," "green arteries" and "orange circles" along with a comfortable living environment and beautiful roads.

The "blue network" plan focuses on the riverside region along Suzhou Creek, the Taopu River and other waterways running across the district.

The Caoyang Community in Putuo, known as China's first workers' community which popped up in the 1950s, has become the main exhibition site for Shanghai's ongoing biennial urban space art season.

Centennial Park, developed from what was once Shanghai's longest railway wet market, has become a key attraction during the art season. It represents Putuo's contribution to the theme of the event ­– "The 15-minute Community Life Circle: The People's City."

"We will provide additional services to entice more employees to work and live in Putuo," said Jiang. "Companies will thus be willing to develop in Putuo for the long term."

Overseas investments will be mainly attracted to the key scientific innovation landmarks in the district.

Putuo plans to host various investment activities before, during and after the China International Import Expo to further promote Putuo and attract overseas investments. Promotion meetings for new products in the life and health industry, livestreaming with overseas headquarters have been scheduled.