SIP's quest for a 'new urban center of Suzhou'

As an important cooperation project between the governments of China and Singapore, Suzhou Industrial Park (SIP) was established in February of 1994. Over the past 27 years, the industrial park has grown rapidly from a low-lying marshland to an international, modern and leading fashion town.

This fall, it was given the role of "building a world-class high-tech park and a first-class pilot free trade zone to become a new urban center of Suzhou facing toward the future."

"To accelerate the construction of a first-class pilot free trade zone is to further focus on opening-up, benchmark the highest international economic and trade rules and build a pilot free trade zone with the most active institutional innovation, the brightest opening background, the most prominent industrial advantages, the strongest innovation momentum and the most superior business environment," said Shen. 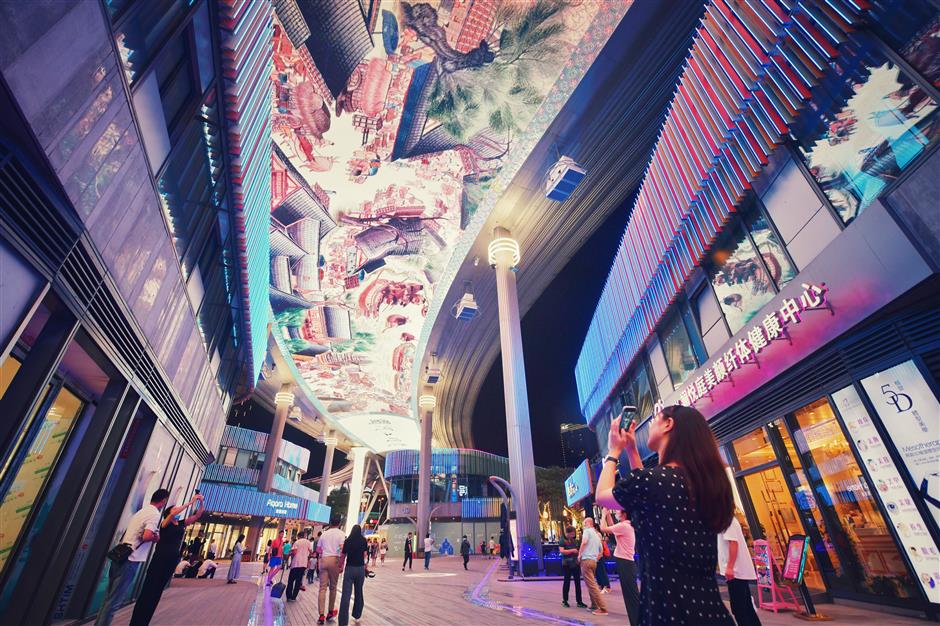 The most notable spotlight of the Harmony Times Square in Suzhou Industrial Park is a 500-meter-long Suzhou Sky Screen above the walkway, which consists of 20 million LEDs.

"To accelerate the construction of a new urban center in Suzhou for the future is to further focus on the city, merge into the regional integrated development of the Yangtze River Delta region and form a twin-city system together with Shanghai, strengthen urban construction and management, improve the core functions such as science and innovation, modern service, consumption and cultural exchanges, so as to make the industry heavier, the urban life warmer, with higher quality and more taste," Shen added.

It was last year that SIP achieved a regional GDP of 290.7 billion yuan (US$46 billion), ranking fourth among all the national high-tech zones throughout the country.

The research and development expenditure accounted for 4.5 percent of GDP, and the total output of enterprises with their annual incomes exceeding 20 million yuan reached more than 500 billion yuan.

Behind the figures is the "hard core" support of industrial development. In 2020, the three emerging industries of biomedicine, nanotechnology and artificial intelligence in SIP maintained an average annual growth rate of more than 20 percent, and the total output reached 249.4 billion yuan, a year-on-year increase of 22.9 percent.

In particular, biomedicine, as the "No. 1 industry" in SIP, has gathered more than 1,800 enterprises, with an output of more than 100 billion yuan, and its industrial competitiveness and talent competitiveness rank first in the country.

As a new financing mode, intellectual property securitization meets the financing needs of the biomedical industry in SIP and expands narrow financing channels and high costs for small and medium-sized biomedical enterprises.

The nano new material cluster in SIP was among the first batch of national advanced manufacturing clusters, and is known as one of the eight micro nano manufacturing fields in the world.

Vigorous development is inseparable from the protection and support of the business environment. In 2015, SIP became one of the first pilot areas of administrative streamlining reform in China.

Amid the establishment of a bureau in SIP to conduct administrative approval, the reform separating permits from the business license, an enterprise could complete the startup within one working day, complete the real estate registration within two working days, and obtain the construction permit of industrial construction projects within 20 working days.

Hence, the approval efficiency of SIP reaches the top level of the World Bank's business environment assessment indicators, creating the "SIP speed" of administrative approval. Meanwhile, artificial intelligence approval and Internet-plus regulation will be introduced in the future.

"The first in China" and "the first in Jiangsu" are not uncommon for SIP. In particular, in the two years since the listing and establishment of the Suzhou Free Trade Zone, more than 100 firsts have been formed, including cloud-based logistics platform "HGJ.com," and "Suzhou International Commercial Tribunal," which have been replicated and promoted nationwide. 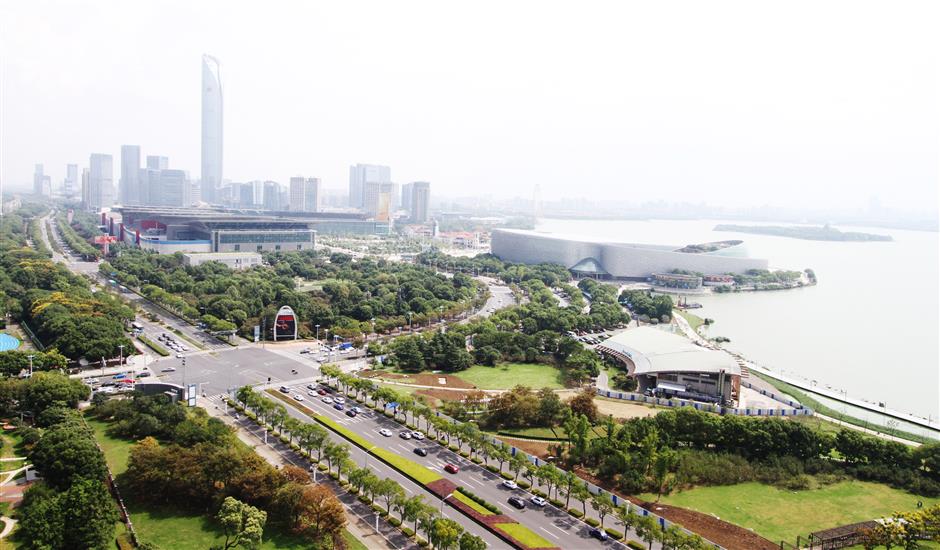 The sending cost of a shipping bill is reduced from the previous US$10-30 to US$3-7, the timeliness is reduced from one day to a few minutes and the accuracy is more than 99 percent, according to HGJ.com.

The system processes 100,000 tickets per month, saving millions of dollars in document costs for enterprises.

In the first half of this year, newly registered overseas investment institutions, investment amount and other indicators accounted for more than 80 percent of Jiangsu's free trade zones.

The Daoxin Supply Chain Management in SIP initiated container trucking with European countries. Through the entry and exit of Horgos port in Xinjiang, it maintained customized 2-4 container trucking to and from China and Europe every week amid the outbreak of the COVID-19 pandemic, which alleviated transportation difficulties caused by the limited shipping and air transport capacity.

At present, more than 100 truckloads are shipped every month, and the cumulative import and export value exceeds 3 billion yuan, an increase of more than eight times year on year.

It takes 15 days from Suzhou to Stuttgart, Germany, involving 9,000 kilometers and passing through Kazakhstan, Russia, Belarus and Poland, according to Hu Rongyi, general manager of Daoxin.

"Taking German imports as an example, air freight door-to-door eight days, sea 50 days and railway 35 days. All three modes of transportation need to book containers three to 10 days in advance. For railway transportation, 41 containers of cargo must be accumulated before they can make up a train and be sent back to China, but the threshold for container trucking starts from only two containers. The time limit is almost the same as that of air freight, but the cost is 40 percent lower," Hu said.

Moreover, on December 10, 2020, the General Administration of Customs approved SIP Customs and Pudong International Airport Customs to take the lead in carrying out the pilot of coordinated control and inspection of high-tech goods such as integrated customs vacuum packaging in the Yangtze River Delta region.

For goods with vacuum packaging, light proof packaging and constant temperature storage that are not suitable for entry inspection in the airport customs supervision, they will be transported to SIP directly.

Gao Yanyun, senior vice president of production for Bosch Automotive Electronics China, told Shanghai Daily, "The reform has further optimized the operation mode of import inspection of high-tech goods, improved logistics efficiency, and enhanced the safety and stability of our integrated circuits and other goods in the import link, which is a real benefit under the integrated development strategy of the Yangtze River Delta region."

At present, SIP has attracted more than 5,000 foreign-invested projects, and the actual utilization of foreign investment exceeds US$35 billion. A total of 101 Fortune Global 500 enterprises have invested in 166 projects here. 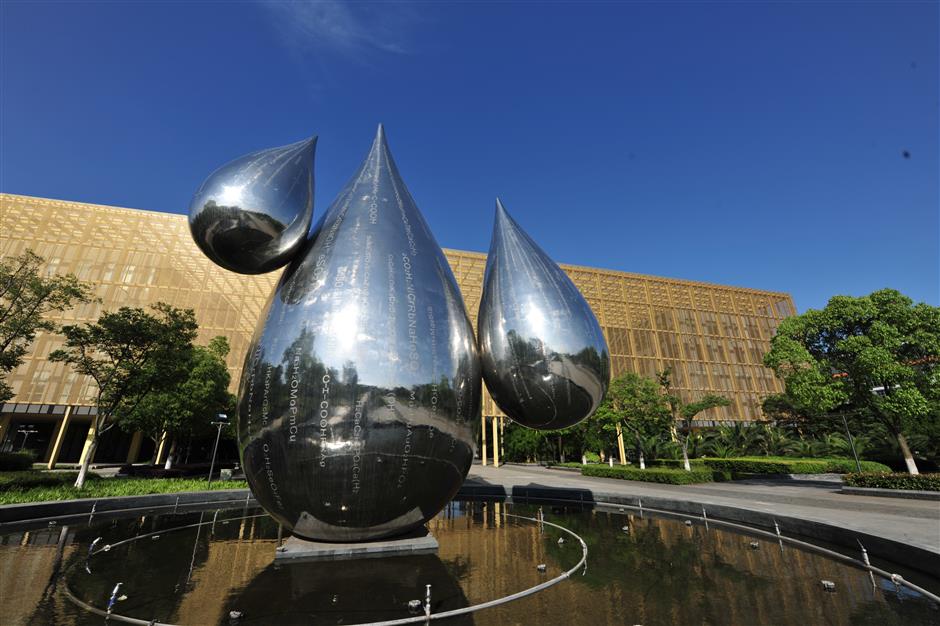 The first-class business environment needs first-class professional protection. In November of 2020, the Suzhou International Commercial Tribunal was inaugurated in SIP. This is the first international commercial tribunal approved by the Supreme People's Court and established in a local court. It will centrally administer foreign-related commercial cases in Suzhou.

Shen said that in the next stage, SIP will be the "good neighbor" of Shanghai, actively undertake the spillover effect of Shanghai and realize the dislocation and complementary development with Shanghai.

"There are 69 'Lighthouse' factories in the world, and two are in SIP (Bosch and Johnson & Johnson). This shows that SIP has a strong manufacturing foundation and cost advantages, and can form a cooperation mode of 'Shanghai R&D plus SIP manufacturing'," Shen said.

The coordinated development between SIP and Shanghai has been included in the national strategy. According to the overall plan for the construction of Hongqiao International Open Hub, SIP is an important node on the "North Expansion Belt."

In the three-year action plan for key tasks of Hongqiao International Open Hub Construction (2021-2023), SIP is responsible for or participates in promoting nearly 40 items.

SIP will accelerate the implementation of 443 key projects, with a cumulative investment of about 330.6 billion yuan, in order to comprehensively improve the level of urban construction management.

Shen said that the park should adhere to the global vision, international standards, Suzhou characteristics and SIP quality, prepare a new version of land and space master plan at a high level, and optimize the urban spatial layout.

The new mission of SIP is to build a "new urban center of Suzhou."