The economic development of Qingpu District has been in the fast lane with the implementation of four projects over the past five years, aiming to create a robust future.

The district has witnessed a leapfrog achievement from a suburban district into an international hub over the past five years.

The economic structure of Qingpu District has kept improving in recent years. The development of its pillar industries, such as logistics, exhibition and convention, trade, high-end information technology, advanced smart manufacturing and culture, tourism and health, has accelerated.

The BeiDou West Hongqiao Base, China's first BeiDou industry park in operation and service, has garnered about 100 companies relevant to BeiDou navigation and global positioning application.

Its cumulative output value has hit 14.2 billion yuan (US$2.2 billion) since the launch of the base, with a tax revenue of 950 million yuan.

Fruitful results have been achieved by a number of leading industry companies, such as Shanghai Huace Navigation Technology, Lianshi, Ubi Navi and High Gain at the base, and it aims to further expand the BeiDou industry chain.

As the venue of the China International Import Expo is located in Qingpu, the district has become a shining pearl in the Yangtze River Delta region.

Over the past five years, the business environment of the district has kept improving, attracting 29 listed companies and 43 headquarters companies.

The district has witnessed rapid development of its logistics industry.

The business revenue of express delivery industry in the district soared to 110 billion yuan last year from 48.3 billion yuan in 2016. 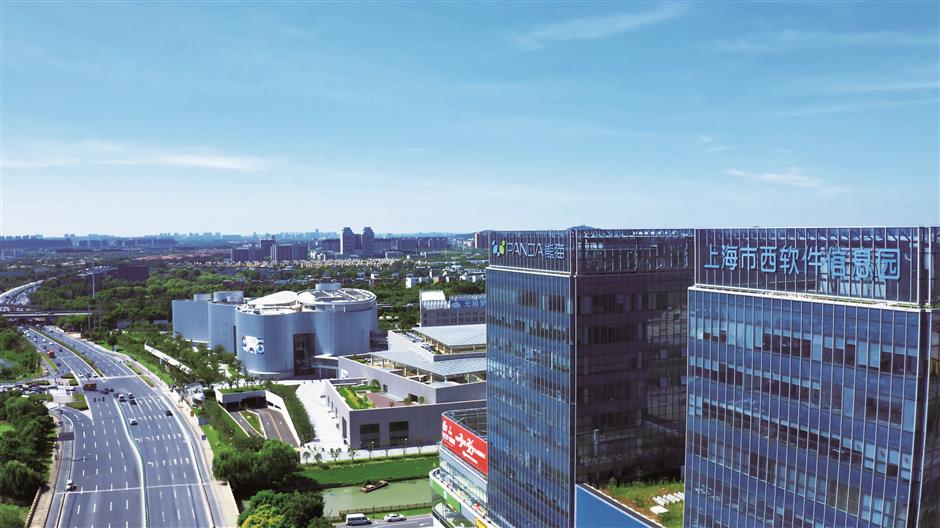 Consumption and business circles are created in the city to boost consumption.

A shopping route has been unveiled along Metro Line 17, and commercial corridors along the Zhuguang Road, Jiasong Road M. and Waiqingsong Highway have been built.

The National Exhibition and Convention Center (Shanghai) and Greenland Global Community Trading Hub have become a debut highland of commodities from the globe.

Several culture and art business circles have been created.

Now, residents in Qingpu do not need to visit downtown areas for shopping, and the Bailian Qingpu Outlets has attracted a large number of shoppers from elsewhere in China.

A digital approach is taken in business complexes, and all business circles in the Qingpu New City have been covered by 5G network.

So far, digital yuan has been introduced at 40 businesses at venues such as Zhujiajiao Ancient Town and Bailian Qingpu Outlets, ensuring digitalization empowers business development.

The Qingpu New City will strengthen coordination with the Zhangjiang Science and Technology City in the east and cooperation with cities of the Yangtze River Delta region in the west.

Construction of the Xicen Science and Technology Center is in full swing.

In future, the center will serve as an industry complex incorporating office building, research and development center, technology incubation, manufacturing service and residences.

Ane Logistics, established in 2010, is a unicorn enterprise of China and its daily peak volume of cargo has surpassed 51,000 tons, leading the industry.

The listing of Shanghai Ane Logistics is an epitome of the flourishing development of enterprises in Qingpu District.

Qingpu is continuously improving its all-round government affairs environment, legal environment and business environment. It is creating a liveable environment to lift its core competitiveness.