Explore the delights, beauty of autumn in enchanting Jing'an

Autumn, in many people's eyes, is the best season of the year. There is so much written in celebration of autumn.

Nobel laureate Albert Camus compared autumn to a second spring "when every leaf is a flower." For 19th century novelist George Eliot, autumn was delicious. "My very soul is wedded to it, and if I were a bird, I would fly about the earth seeking successive autumns," she said. American novelist F. Scott Fitzger ald thought "life starts all over again when it gets crisp in the fall."

So it is a prime time to enjoy this enchantingly colorful world and, moreover, the sky is clear and the air is crisp. Why not take a short walk to explore the delights and beauty of autumn in Jing'an?

Here are some suggestions. 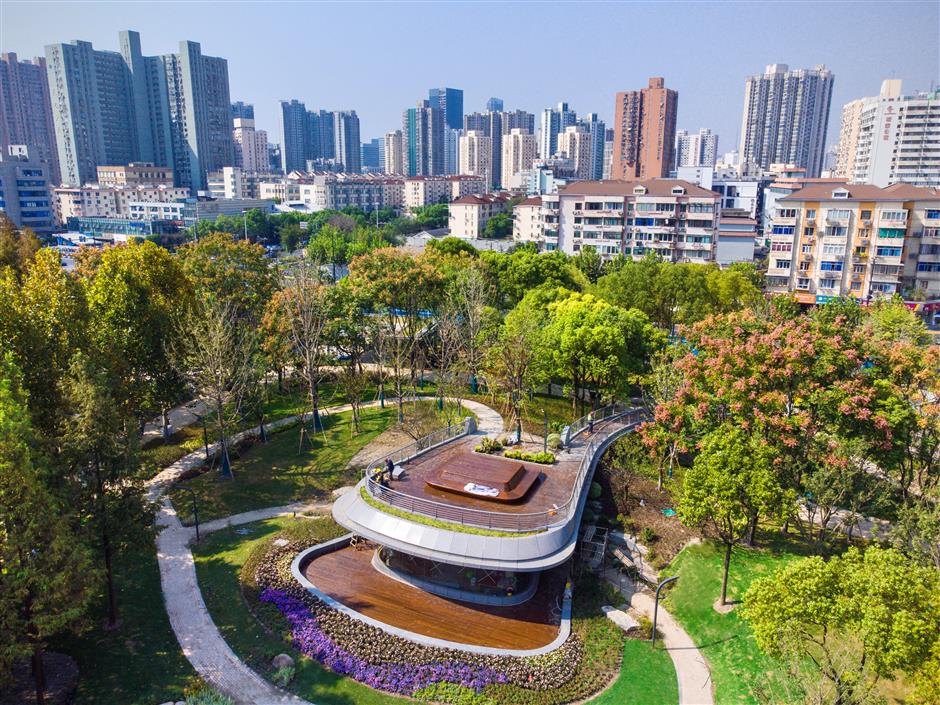 Take in the beautiful natural surroundings

There's nothing better in autumn than to crunch a yellow carpet of foliage beneath your feet.

This year, the seasonal spectacle is presented on 41 streets citywide, including two in Jing'an. Between December 1 and 15, sanitation workers will allow the fallen leaves to remain on Julu Road and Yuncheng Road rather than clearing them away.

Tall sycamore trees line the section of Julu Road between Fumin and Changshu roads, and the strip of Yuncheng Road between Yichuan Road and Guangzhong Road W.

The streets were carefully selected based on their rich historical elements and architectural features. Fallen leaves would add radiance and beauty to roadside boutiques, cafes and historical buildings, together creating charming romantic autumn scenes. 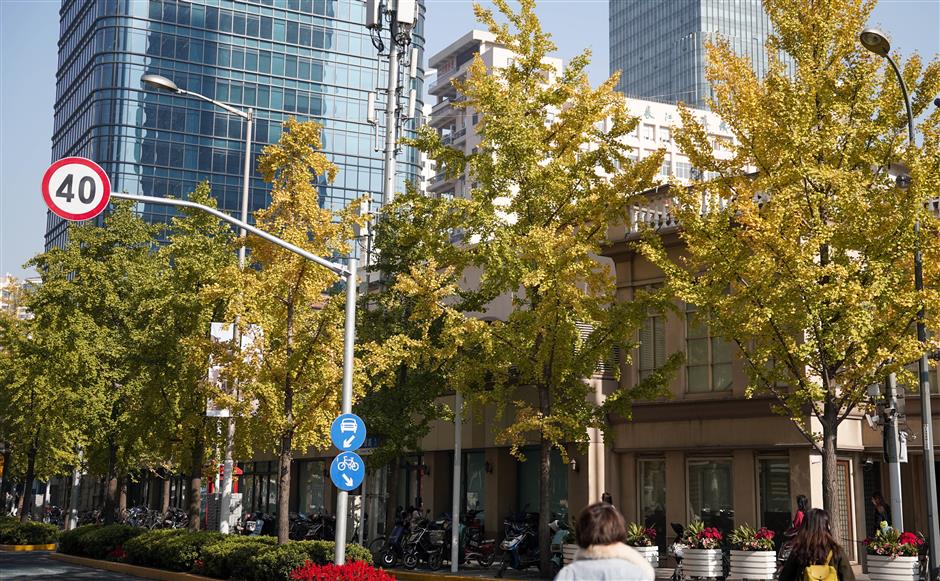 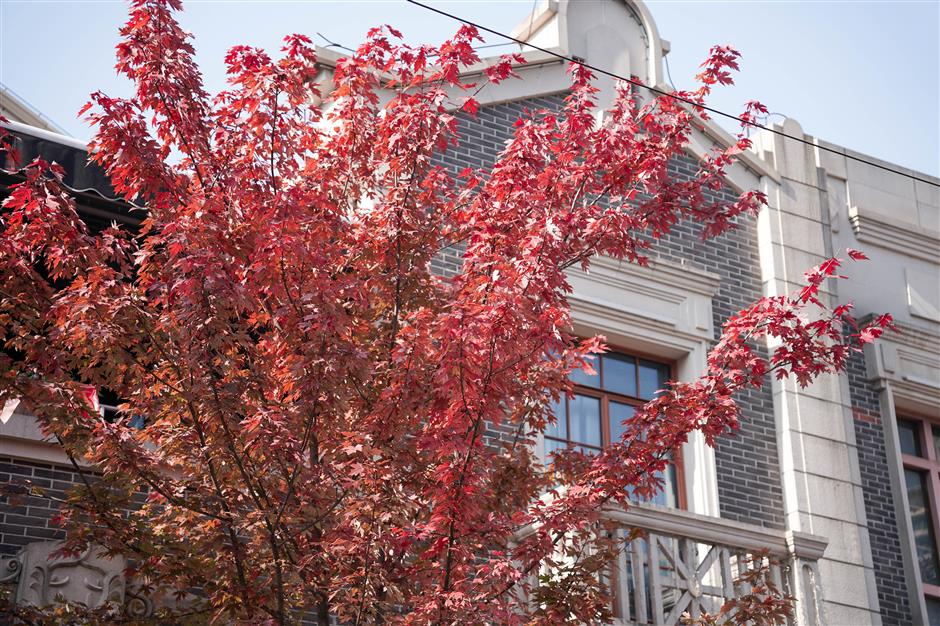 Can't wait to enjoy the foliage? Go to Changde Road to bask in the golden autumn hue. On the section of Chengde Road between Yan'an Road M. and Beijing Road W. are 139 gingko trees. Or enjoy the overhead canopies on Maoming Road N. lined with red maple trees.

Tired of existing parks? Then check out the novelty of Zhongxing Park which reopened to the public on November 15 after renovation.

It covers about 35,000 square meters, east to Zhiyuan Road, south to Zhongxing Road, west to Xizang Road N. and north to Zhonghuaxin Road.

The boulevards are lined with leafy trees. Lawns, shrubs and themed flowerbeds are mixed in with cherry trees, red maple trees and others making up the park's landscape.

Also, facilities have been included to cater to the needs of different age groups, such as play areas for children and fitness equipment for the elderly. 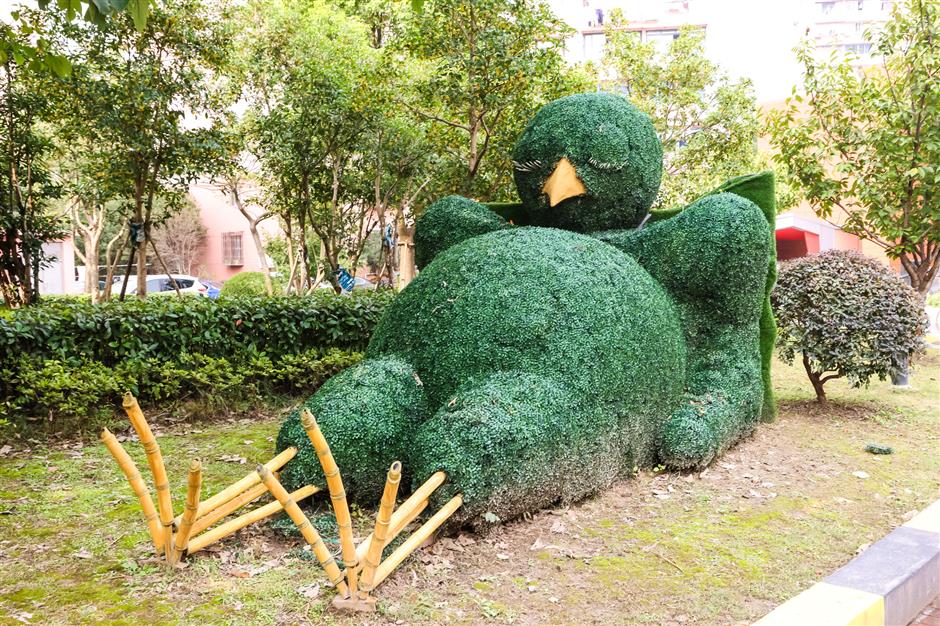 Public art all around

In Jing'an, public art has become integrated with the local environment, and invites people to share in its creative uniqueness.

One only has to look at Joy Brown's lovely bronze and clay human figures that dominate the square of Jing'an Kerry Centre. They exude the pride of the community. Another prominent work in the district is the statue of running horses that stands in front of Shanghai Exhibition Center, created by French artist and sculptor Arman.

Or stand at the end of a lone queue of "people" waiting for a bus to come at the intersection of Nanjing Road W. and Yan'an Road M. They are actually statues depicting different kinds of people, such as a fat man with a large beer belly, a stylish lady fixing her makeup and an old man with a slight stoop and a mask on his face.

In downtown districts like Jing'an, public art is used to revitalize old neighborhoods. Most recently, sculptures, graffiti paintings, photos and art installations have been introduced in the Linfen Road Subdistrict to decorate the decades-old community.

They constitute the "At this moment, beautiful Linfen" exhibition as part of the ongoing Shanghai Urban Space Art Season 2021. The community was selected to join a citywide pilot program to showcase the government's efforts to create a 15-minute life circle.

The exhibition will run through December 22.

Highlights include colorful glass placed in front of a telescope, allowing visitors to see the neighborhood through filters, just like a kaleidoscope, and an art installation made of colorful boards and steel shelves, a metaphor to vibrant living.

"Citizens are encouraged to participate in the redevelopment of the community," said Li Yongbo, Party secretary of the subdistrict. "It is an immersive exhibition with modern public artworks about the daily life of inhabitants." 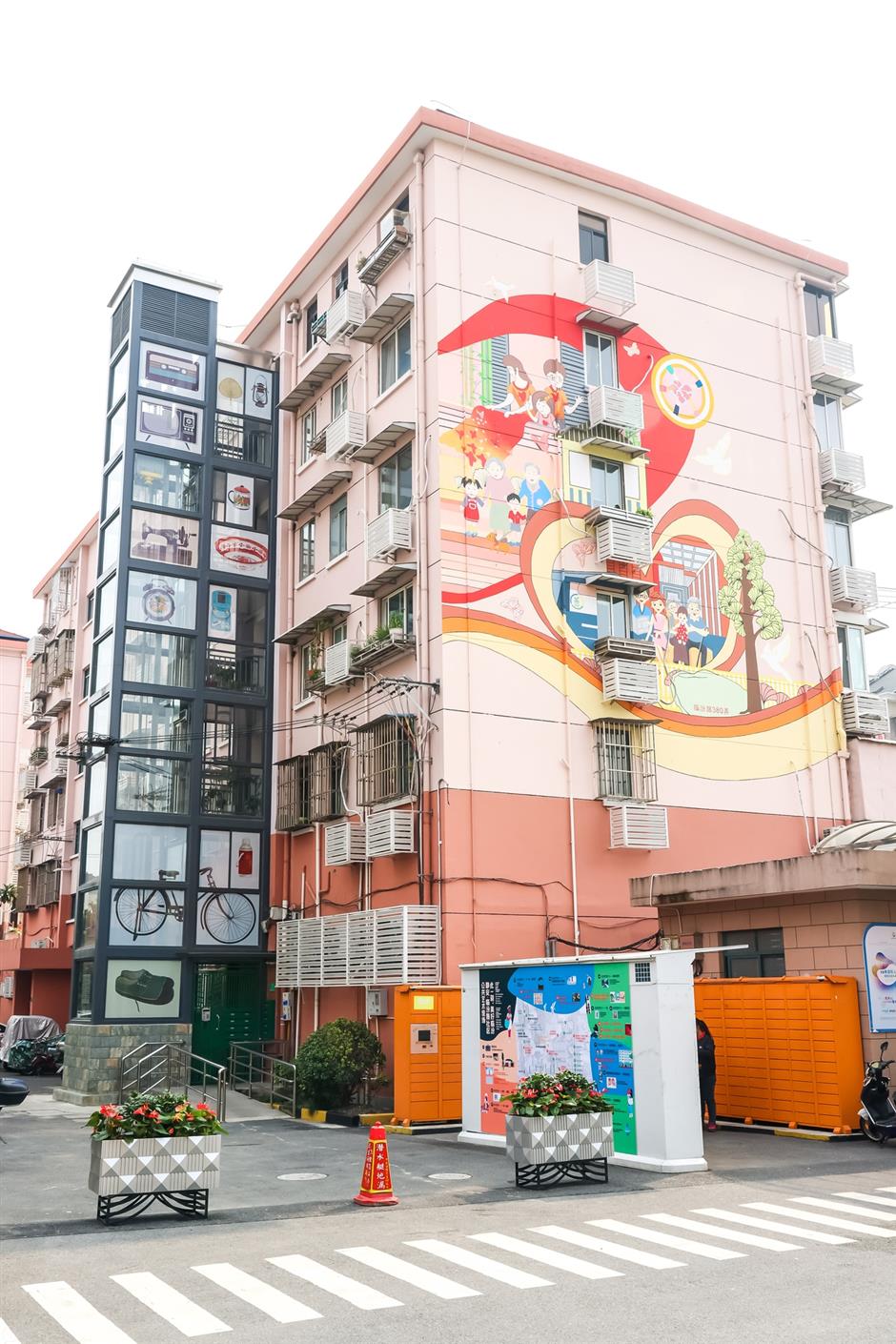 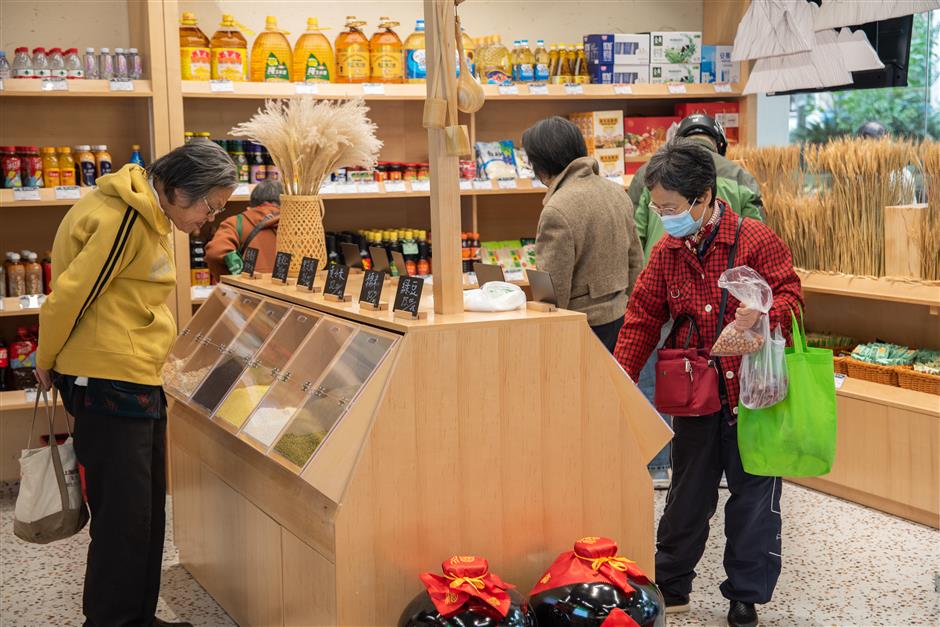 As fancy big shopping malls spring up in the district, time-honored stores are receiving facelifts to cater to today's needs but also retaining their old charm. Why not take a look and experience their authentic Shanghai flavor?

The 63-year-old 6th Foodstuffs and Oil outlet has reopened its flagship store on Wanhangdu Road with an entirely new look after more than 150 days of renovation.

It is decorated in burlywood and white colors, ornamented with rustic touches such as wheat stalks and rattan baskets to create a natural and fresh ambience. Old tools used by grocery stores in the past, such as the abacus to do accounts and scales to weigh rice, are on dis play, reviving childhood memories for many while being suitable for photo-taking.

According to the store, it is decorated in retro chic style to create a popular hangout, as well as stocking popular products to cater to locals' needs.

Moreover, traditional favorites are back on the shelves. As roadside grocery stores are replaced by convenience store chains, older products, like lacovo and malted milk – popular drinks in the 1980s – are often hard to find. But they remain popular with locals, especially middle-aged and senior residents. 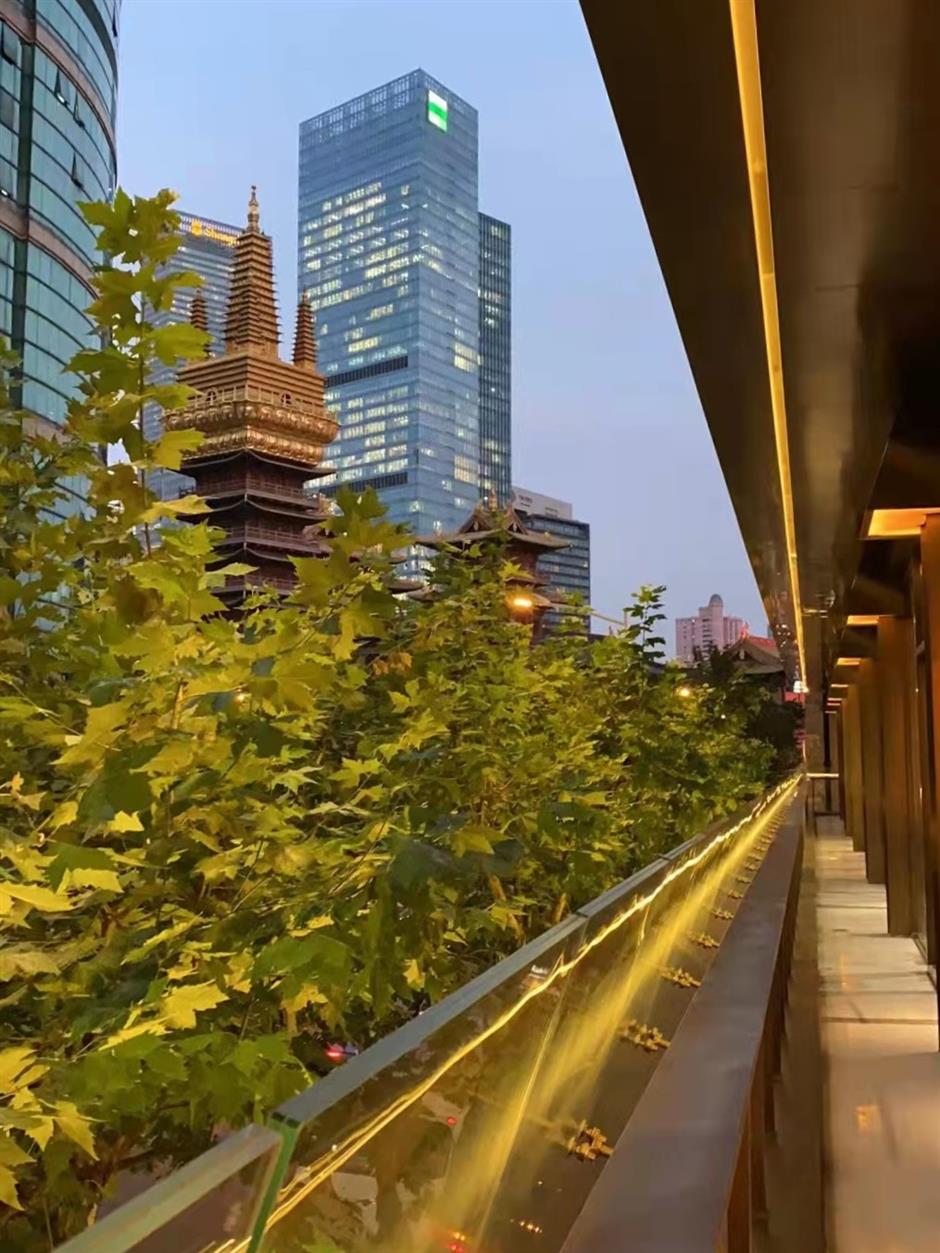 The store also sells homemade fresh noodles, wonton wrappers and sweet fermented rice, among other old-style items. Thanks to their low prices and high quality, these products continue to be very popular.

The venerable 900 Food Court on Wanhangdu Road has adopted the same concept. When it reopened to the public after 500-plus days of renovation, customers were surprised at its stylish decoration.

Notably, it has established an interactive venue for food brands to open pop-up stores and hold activities. It has also built a 70-meter-long "balcony" on the second floor for customers to enjoy beautiful downtown views while having a cup of coffee.

The venue now features 23 well-known brands, such as Xiqu Laodafang, known for crispy meat mooncakes, and Lifeng, known for roast goose and sausage. There are plans to cooperate with these brands to explore new business opportunities.

Additionally, it has introduced food brands that are popular among young people, such as Manner Coffee, Blu Shaak and Double Natu.

According to the mall, it wants to satisfy the needs of local people, mainly senior residents, as well as attract young customers. 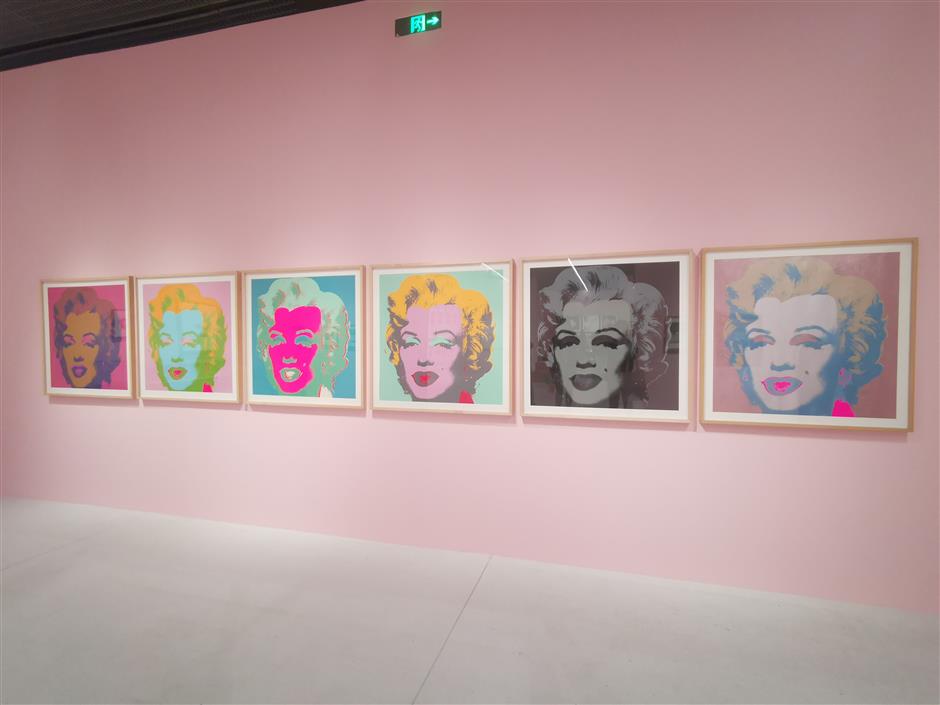 High-quality exhibitions run throughout the year in Jing'an. Here are two recent ones.

"Becoming Andy Warhol," the most comprehensive Warhol exhibition ever staged in China, is currently on show at UCCA Edge in Shanghai.

It displays nearly 400 pieces of works from The Andy Warhol Museum in Pittsburgh, including Warhol's classic paintings, prints and drawings along with his films and photographs. Some are having their debut showing outside the museum in the US.

Structured over five sections, the exhibition explores different periods of Warhol's career, including his forays into blurring the boundaries between fine and commercial art in 1950s' New York, iconic paintings from the 1960s and pieces inspired by New York's vibrant street culture in the 1980s. The exhibition will run through March 6, 2022. 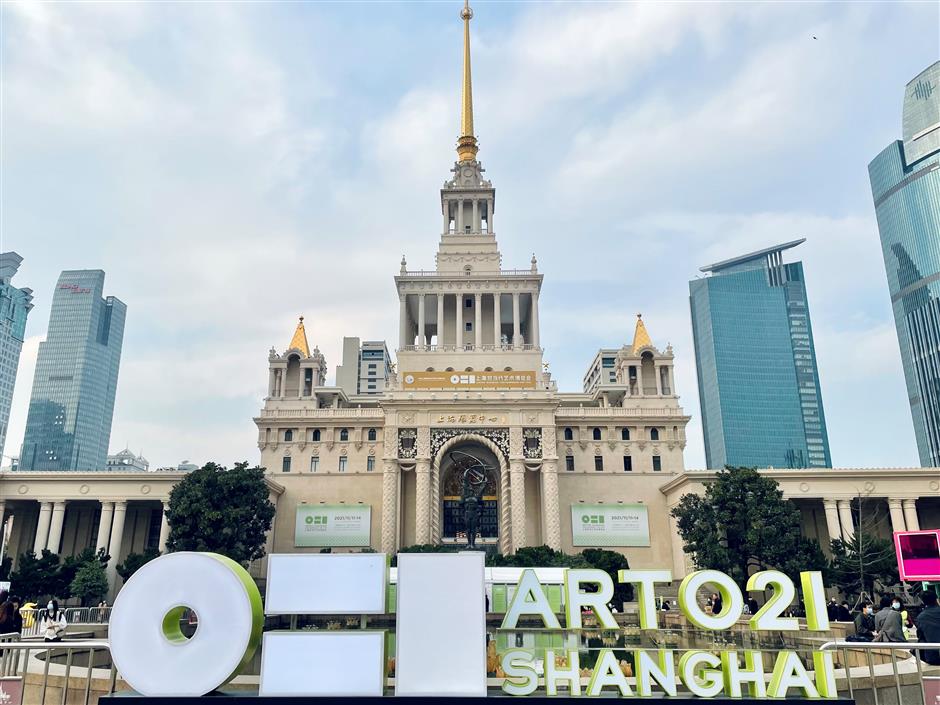 In Shanghai Exhibition Center, the curtain was raised on the Art021 Shanghai Contemporary Art Fair on November 12, featuring works from 134 galleries in 14 countries.

Notably, it was the debut of 42 of the galleries, including Galerie Marguo from France, A Lighthouse called Kanata from Japan and Fabienne Levy from Switzerland, that injected new blood into the art fair which showed thousands of paintings, sculptures, photos, installations, jewellery and other works. 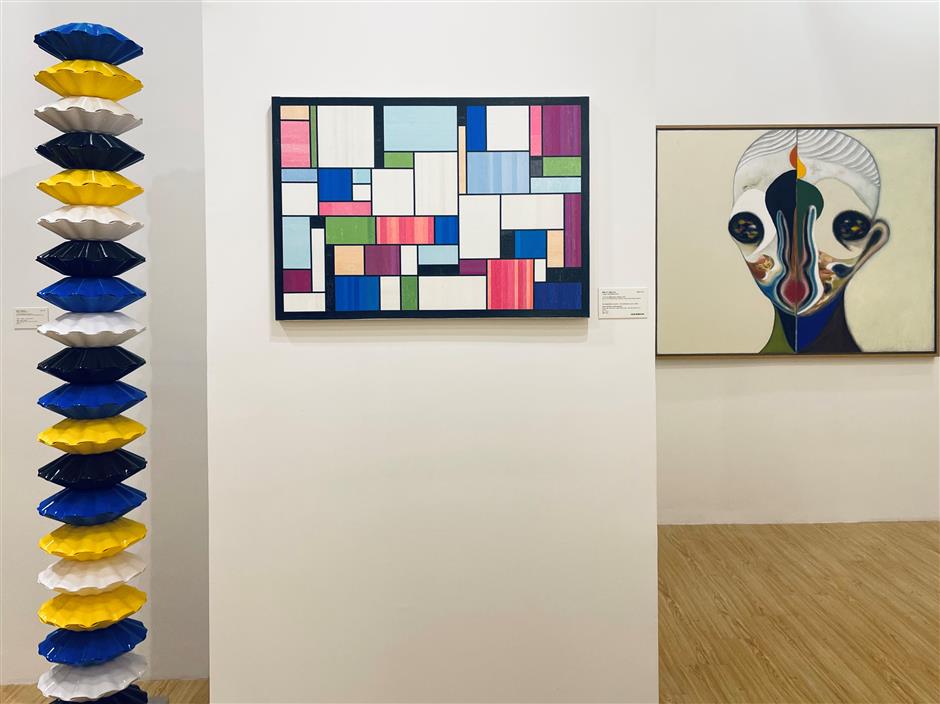 A summit titled "Shanghai Dialogue" was staged during the month, and the "Art Shanghai" plan will begin seeking public artwork for urban renewal projects.

The art fair has ended, but 96 art galleries citywide will host about 100 exhibitions through the end of December, and guided tours by curators will be organized.