Vitrines on one facade of an old Zhang family residence near Shihe River showcases more than a dozen Songjiang silkscreen block prints. The print works, in simple patterns and vibrant colors, are inviting. It is said, jokingly, that the morning sunshine is so hasty in running its errand each day that it always passes the vitrines before 9:30am. In comparison, locals attracted to the artworks would linger until they get their fill of admiring the artworks.

Lu Yongqing, who has been a Songjiang silkscreen block print teacher and artist for 15 years, recently supervised the renovation of the old residence into an intangible cultural heritage promotion center, which now houses three printmaking artists' workshops and is the creative base for more than 30 silkscreen block print artists.

"Songjiang silkscreen block print developed and reached its peak from the mid-1980s to the early 1990s. As the country switched from planned economy to a market-oriented one in the 1990s, a large proportion of the local print artists quit and found jobs in businesses. When I became a culture worker at Songjiang Culture Center in 2006, the number of local print artists had been reduced from nearly 200 to single digits," Lu recalled.

The art form, drawing on Western industrialization achievements by using light-sensitive paper to produce negatives and a tailored machine to produce silkscreen blocks, differs from ordinary Chinese farm paintings in that subtle patterns formed through paints filtered through a silkscreen are reflected in the final works.

Modelled after workers' posters from the Soviet Union, farm painting in China dates back before the "cultural revolution" (1966-1976) in Yan'an, Shaanxi Province. It was nourished by traditional Chinese art forms such as embroidery, stove ornament paintings and paper cutting.

In the 1980s, the success of farm paintings to illustrate and enrich rural life in the neighboring Jinshan area in Shanghai sparked citywide modeling. Zhu Yinneng (1935-2021), a pioneer of Songjiang silkscreen block print and a cultural worker at the local culture center, talked with his coworkers. They all wanted the area to have a flourishing rural art form with its own unique features.

While running an errand in the Jiashan area in neighboring Zhejiang Province, Zhu happened to see some workers using the silkscreen block printing method to produce ad banners. Inspired by that, in 1984 he introduced the art technique to Songjiang to help local farmers express their lifestyles.

Zhu used to ride his bicycle from his home near Xilin Temple in downtown Songjiang to the training center in Huayangqiao Village. At that time, the road was rugged and paved with pebbles, and the classes always took place in the evening. 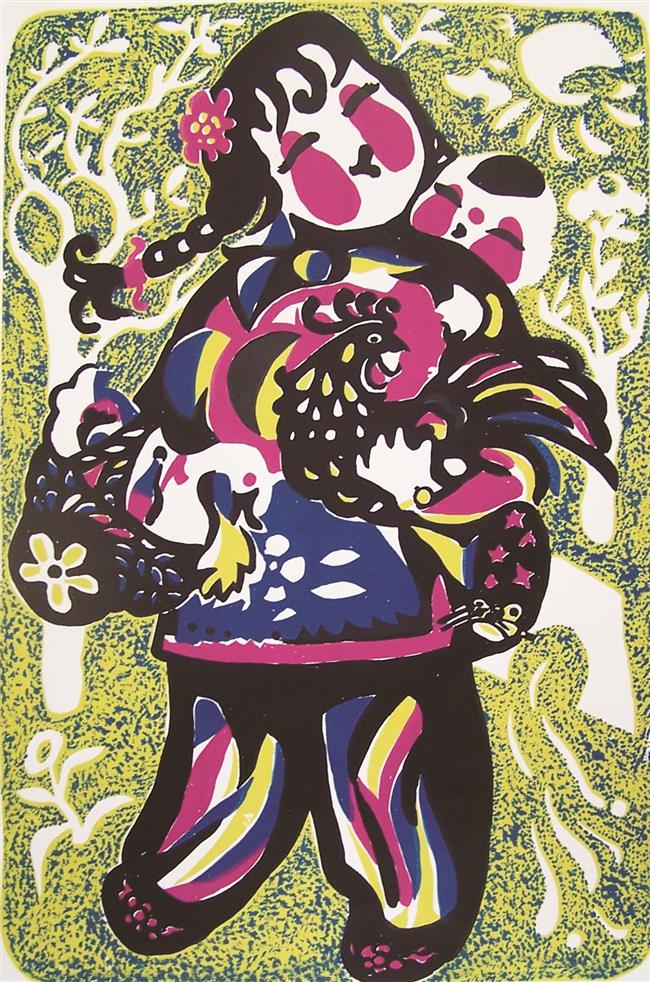 Qian Bingrong, 70 and a senior folk artist at Songjiang Culture Center, was one of the students back then.

"At that time we didn't have professional fine art supplies like plaster moldings, so we usually took turns to be each other's model when we were practicing art skills," Qian recalled. 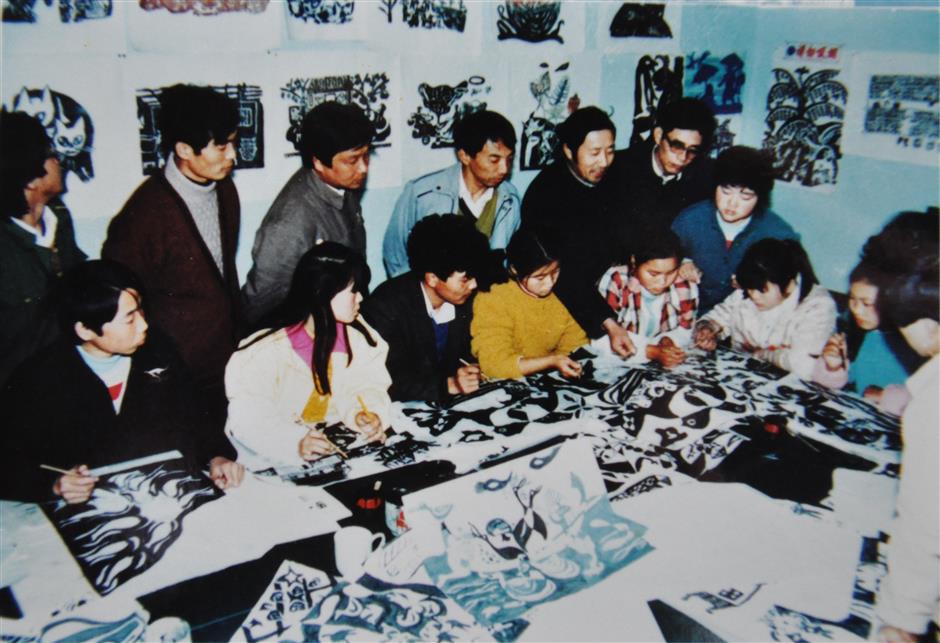 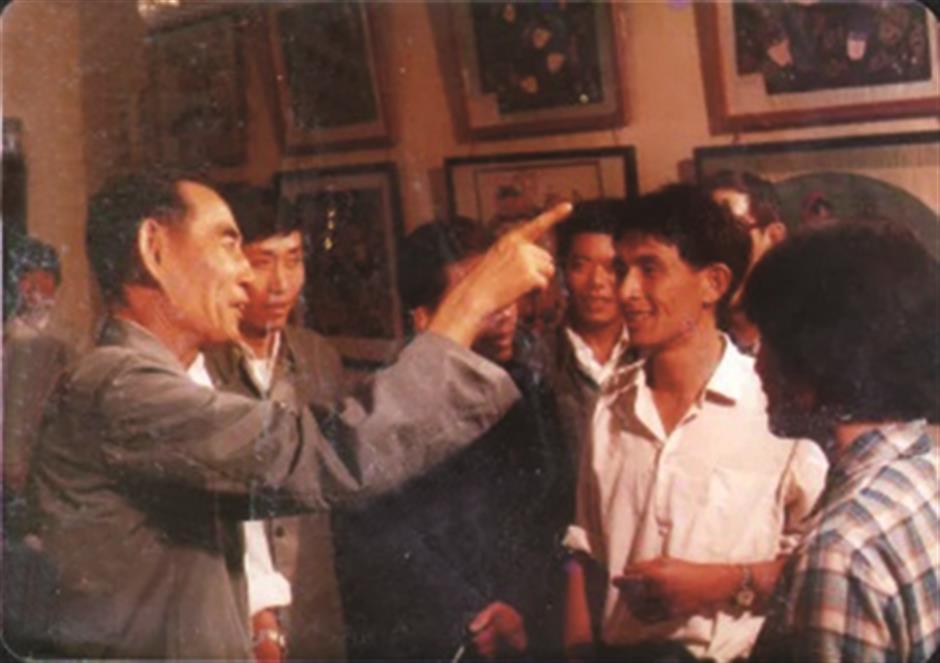 The three generations of Qian's family – Qian, his son Qian Gang and his grandson – are now fine art practitioners.

"As other art forms might experience, Songjiang silkscreen block print reached its choke point in the 1990s. To restore it from an endangered condition, we tried all means to find the previous painters. Among them were Zhang Yuliang and Wu Deliang. Zhang would come to the cultural center to do prints every day, whereas Wu would visit the center every other day," Lu said.

"In the planned economy era, local print artists worked on their farmlands or at small factories. As the market-oriented economy swept across Chinese society in the 1990s, I had to change my job to make ends meet. I became a butcher, working from 6am until noon selling pork at a wet market, and from noon until 6pm at another place in Huayangqiao Village hoping to sell more. In the evening I went to a slaughterhouse to fetch pigs and arrived home after 10pm. That used to be my daily routine, and time left for artistic pursuits was scarce," Zhang said.

"As Chedun Town set up its culture and sports office around 2009, cultural officials started to find and assemble the group of previous print artists in the hope of reviving Songjiang silkscreen block print. From 2009 to June 2010, I was recruited into Songjiang Culture Center to restudy the local silkscreen block print. At that time I would sell pork till 10am, then pull off the roller shutter door and go to study at the culture center until 4pm almost all year excluding Spring Festival," Zhang said. "The art form evolved greatly during my absence from it. The equipment, styles and techniques all changed."

Print artists were recalled, art techniques were restored and facilities were improved. In the first national farm painting exhibition held by the China Artists Association in 2010, 11 works by Songjiang silkscreen block print artists were selected.

In 2012, Songjiang Printmaking Academy was established.

"At its beginning, Songjiang silkscreen block print was different than the Beaux Arts that emphasize perspectives and colors. That was its way of breaking the chains," Lu said. "The establishment of the local printmaking academy, however, was the art form's second time breaking its chains. Previously, people with thorough academic training had difficulty engaging in the folk art form. The printmaking academy now encourages diversity and welcomes both farmer artists and academic painters." 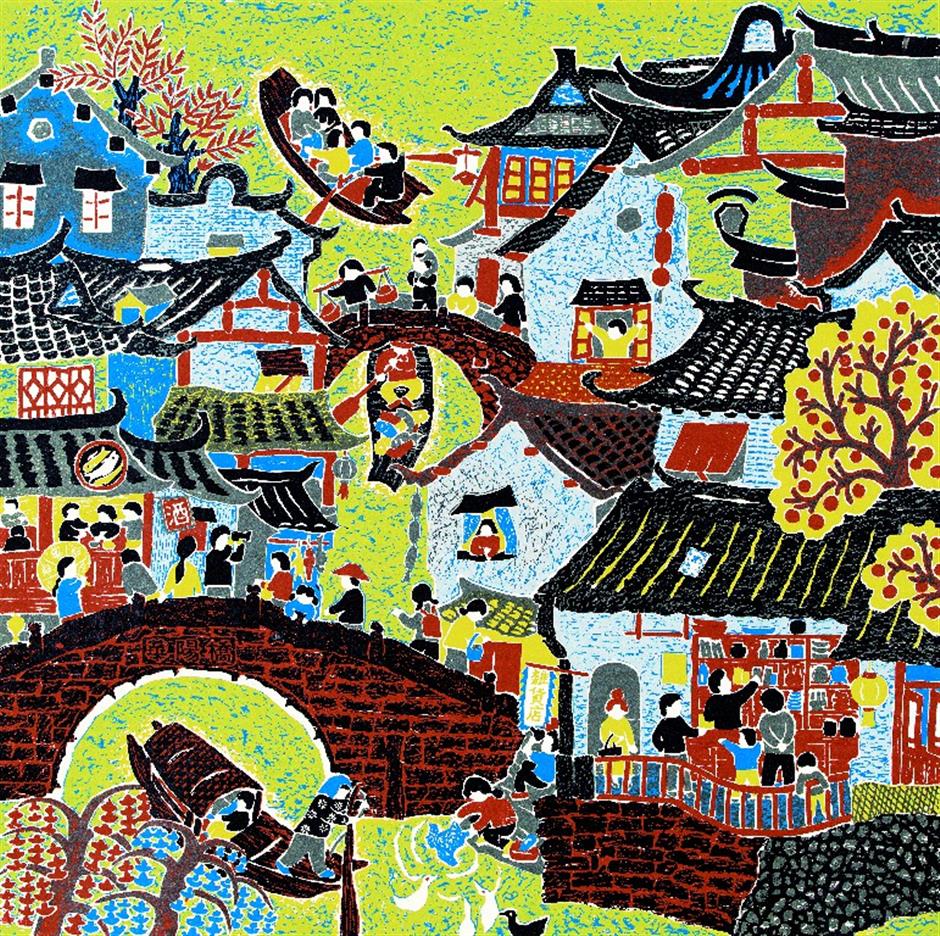 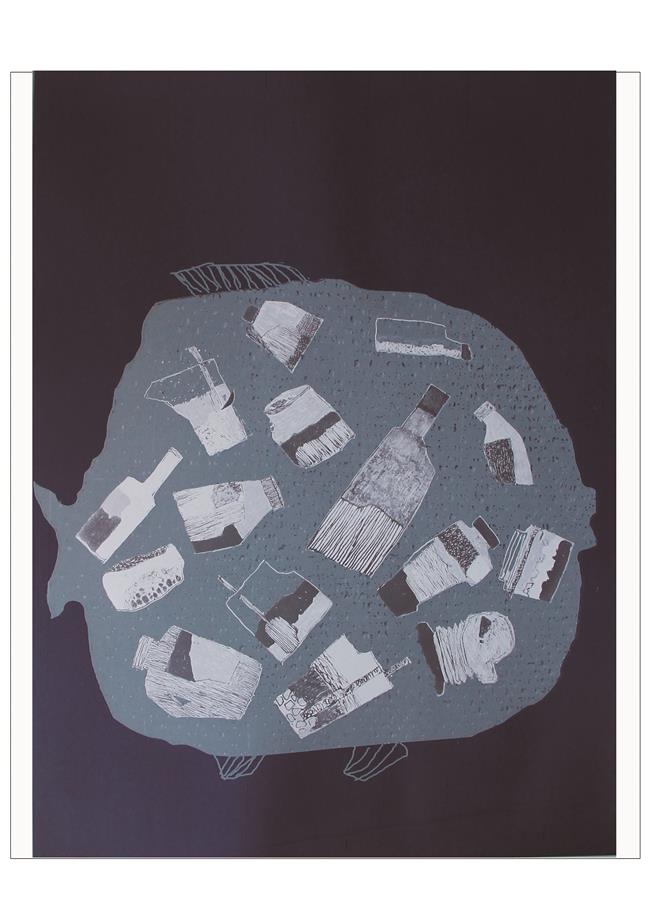 Government support is growing in step with the prospering art form. In 2020, the Chedun Silkscreen Block Print Gallery and Intangible Cultural Heritage Inheritance Center was set up, with government financial aid reaching 2.8 million yuan (US$439,600). Zhang was appointed as its head.

The opening of the intangible cultural promotion center near Shihe River in the Cangcheng Historic and Cultural Zone will further revive the art.

"Farmer artists will carry out their creative pursuits here, they will also be trained to have the ability to promote the art through teaching and video demonstration," Lu, who is now head of the printmaking academy and has supervised founding of several silkscreen block print workshops, said confidently.

The print artists team is expanding, with farmer artists, academic artists, young artists and even tourists all participating in. Their ages range from 20 to 80 years old.

Zhu was still sketching in a convalescent home one month before he passed away in September this year.

Four decades ago, what was in his mind when he rode his bicycle for miles over the rough pebble-paved road heading to the night art school in rural Songjiang? Did he feel the pulse of an embryo of a regional new art amid the creaking of his bicycle wheels?