Jiading painters Chen Di and Li Zhongyin received the Magnolia Art Award at the 11th Shanghai Art Exhibition ongoing through January 5. The award is the highest in local art world to honor these artists for their exemplary work.

From unknown to a renowned artist

Chen Di's masterpiece is named after the special moment, titled "2021.06.17," when three taikonauts began their exploration on the China Space Station.

Chen uses simple and elegant tones with complex lines to depict the internal scene of the space station and the working environment of the taikonauts. 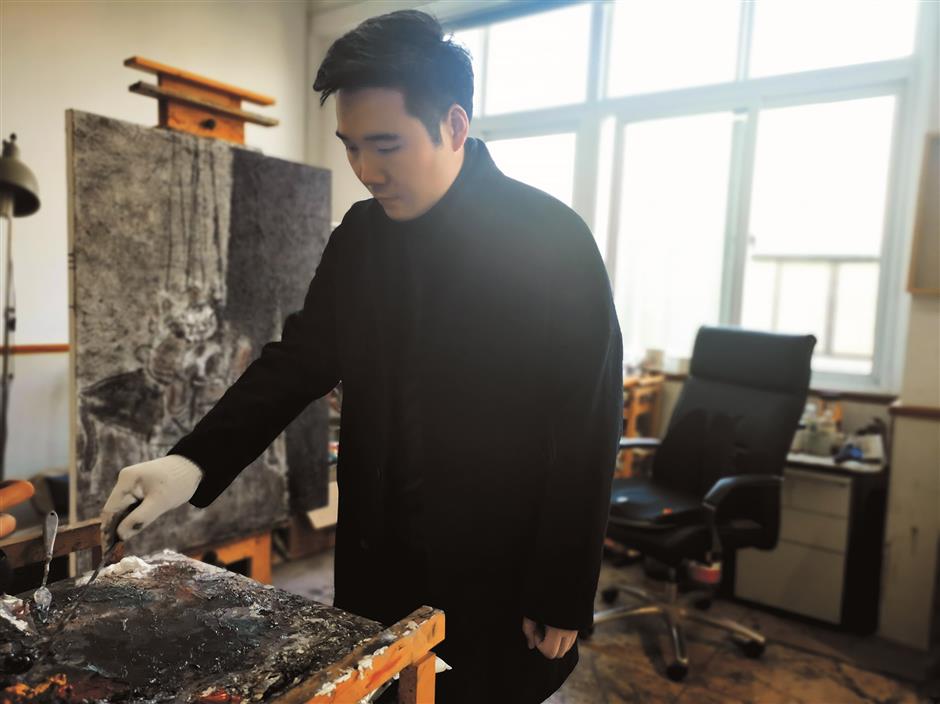 Chen Di features "2021.06.17" when taikonauts began their mission on the China Space Station.

"Art should follow the times," Chen said when talking about the original intention of creation. He believes that aerospace engineering is a vital national strategy. When he saw the news that taikonauts landed in the space station, he was very excited.

"Although I can't go to the front line, as a young painter, I can express my respect by using a brush to frame this historic moment," said Chen.

In order to better create this work, Chen closely followed the news of the taikonauts' life in and out of the cabin.

While sketching, he also integrated his own understanding and imagination.

"The cabin is actually very narrow, but I have increased the extension space, forming a visual effect in the outer cabin. It is more open visually, which heightens my imagination of the future construction of the space station," said Chen.

Yin Xiong, vice chairman of the Shanghai Artists Association and a judge at the 11th Shanghai Art Exhibition, spoke highly of this work: "The author has constructed a fascinating, imaginative and futuristic picture with novel composition and a unique painting style."

Chen was born in Xiangcheng, Henan Province, in 1985. From primary school through middle school, Chen always maintained his love for painting even though his schoolwork was heavy. Unfortunately, he didn't study painting professionally or systematically until middle school.

It was not until he went to high school in the county that he participated in an art training class in the summer of his first year of high school. This was the beginning of his formal art training.

After graduating from high school, he was admitted to the Art Department of the Art College of Jiangsu University.

In 2007, after graduation, he resolutely gave up the opportunity to teach in his hometown and came to Shanghai alone to pursue the artistic path.

During his early days in Shanghai, Chen worked at Tongji Huangdu Primary School in Jiading. "It's hard to calm down and create when you have to prepare lessons and teach every day," he remarked.

Since 2009, Chen has picked up his brush and participated in many important national academic exhibitions. In 2010, after the Shanghai World Expo, the exhibition of the Expo venues in the eyes of painters was held.

Chen, who was still unknown at that time, became one of the few participating painters who emerged from the audition by virtue of his oil painting titled "Walking around the World Expo."

In 2015, Chen's oil painting "Three in Front and Behind the Stage" won the highest award at the Fifth National Youth Art Exhibition. It was then that Chen entered the public eye.

Chen has always put his enthusiasm for painting into art education and has made great achievements in that area as well.

Now, although he has left the primary school and serves as an art director at the Shanghai Mass Art Museum, this teaching experience is precious to him.

"It has been part of the transformation of my state of mind, from the pain at the beginning to improvement later, and then to stability now," he said.

The color of Chen's works is becoming brighter, which not only reflects the change of his creative mood but also recounts his mental journey from an unknown young painter to being gradually known and understood by the public.

He has become an important member of the Shanghai oil painting community. 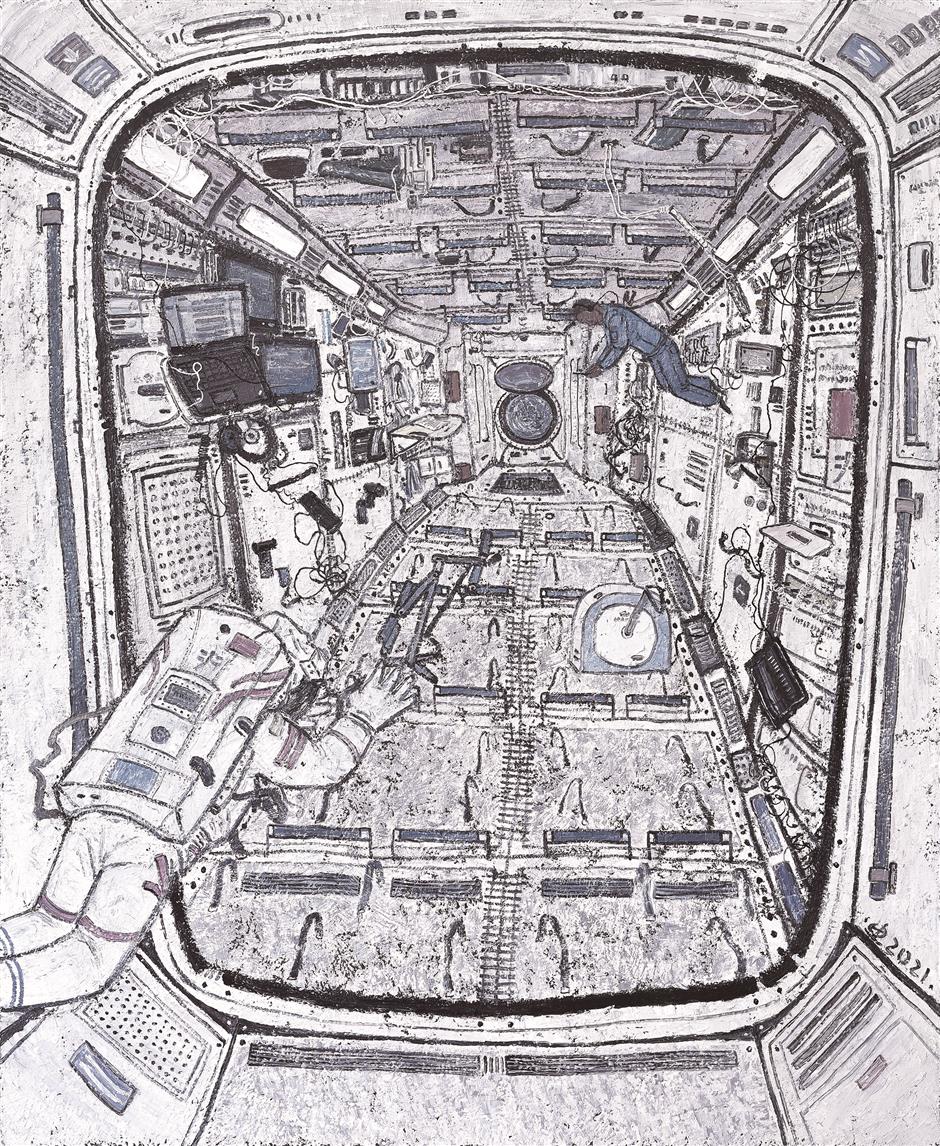 Chen Di's masterpiece "2021.06.17," featuring three taikonauts' lives on the China Space Station, wins Magnolia Art Award. He uses simple and elegant tones with complex lines to depict the internal scene of the space station and the working environment of the taikonauts.

Planting the seeds of art

"When You Are Old," the award-winning work of Jiading painter Li Zhongyin, is full of human touch. It depicts the scene of an ordinary family in Fujian Province, where the younger generation gathers around an old man and patiently teaches him how to use intelligent devices.

From Li's paintings, people can feel that his delicate strokes are full of love for his family. He said that a large part of the reason why he can embark on the road of art is the support of his family. 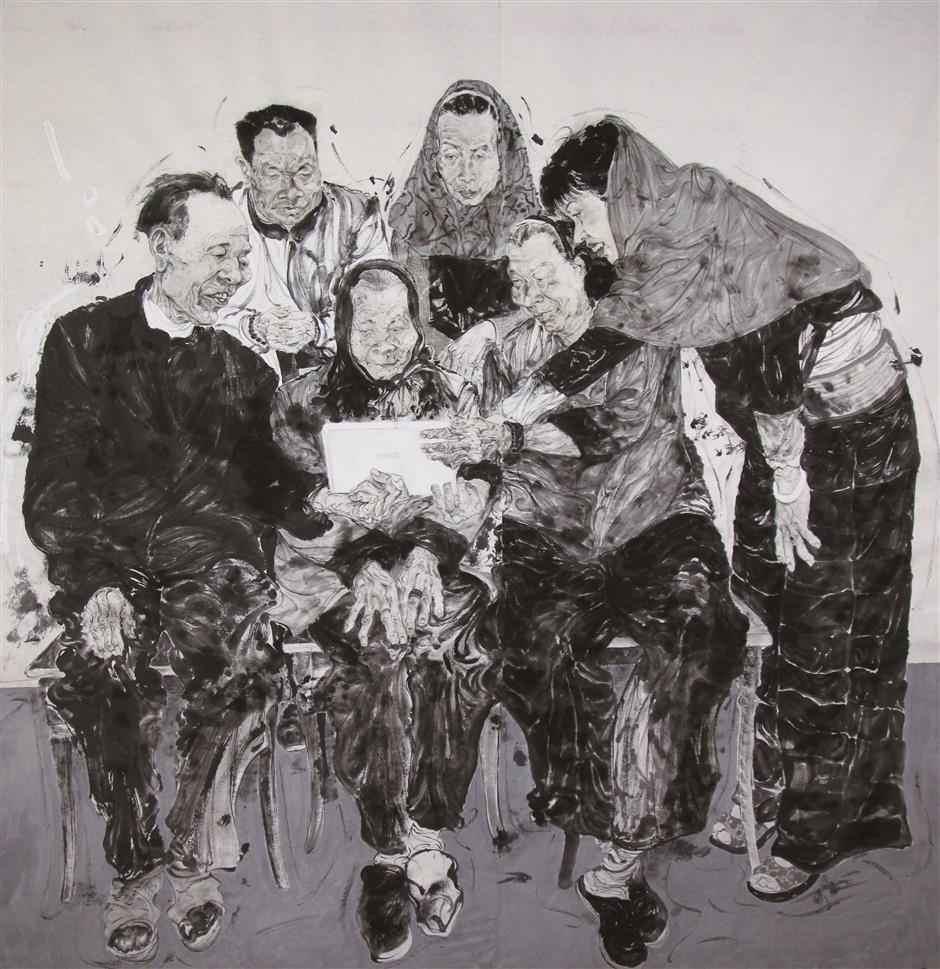 "When You Are Old," the award-winning work of Li Zhongyin, depicts the scene of an ordinary family in Fujian Province, where the younger generation gathers around an old man and patiently teaches him how to use intelligent devices.

Li was born in rural Shandong Province in 1980. He has loved painting since childhood. Sketching every day has become a habit that Li can't quit, and the art seeds buried in his heart sprout and grow.

In 1999, Li was admitted to the Art Department of Yantai Normal University (now Ludong University).

Although the journey of pursuing dreams was bumpy, he never gave up. In his opinion, he has been surrounded by love, which always pushes him forward.

In 2014, Li settled down in Jiading as an outstanding graduate of Shanghai and became a teacher of Jianbang School.

"My idea is very simple. I want to condense the care and support I gained in the past into the seeds of art and sow them in the hearts of more children, so that they can feel the happiness brought by art earlier."

Because he was a teacher, he gave a lot of time to the students so almost all his paintings were completed in the evening and holidays. But Li never felt tired. Instead, he became more energetic. 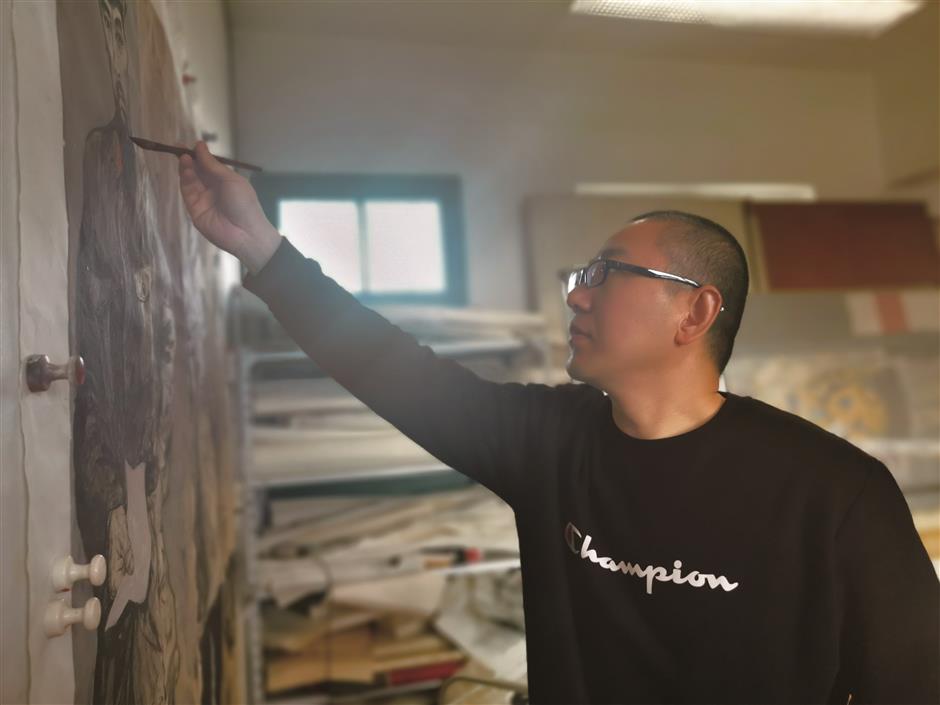 Jiading painter Li Zhongyin depicts "When you are old," the award-winning painting at his workshop.

"People who paint know that in fact, no matter what we paint, it has something to do with ourselves. Therefore, what I pay, what I get and what I have experienced will become a precious wealth of painting creation," said Li.

In 2015, Li created a painting about veterans, and the delicate emotions in the painting are ready to come out.

"I named the painting 'History Will Never Forget' to remember the veterans of the War of Resistance Against Japanese Aggression and to pay high tribute to them," said him.

With his exquisite and unique brushwork and the real emotion behind, Li won the Magnolia Art Award in the eighth Shanghai Art Exhibition because of the work.

With a full sense of achievement, Li's enthusiasm has become stronger. From the creation of historical figures to the veteran series and then to the statues for his peers, Li's works are more down to the earth.

"Literary and artistic workers should go deep into life and take root in the people," said Li. "As for the rest, let my paintings tell."

Two paintings – "Water Village In Dream" and "Laughter in the Mountain" – created by Luo Weimin and Zhang Weiren are also on display at the exhibition. 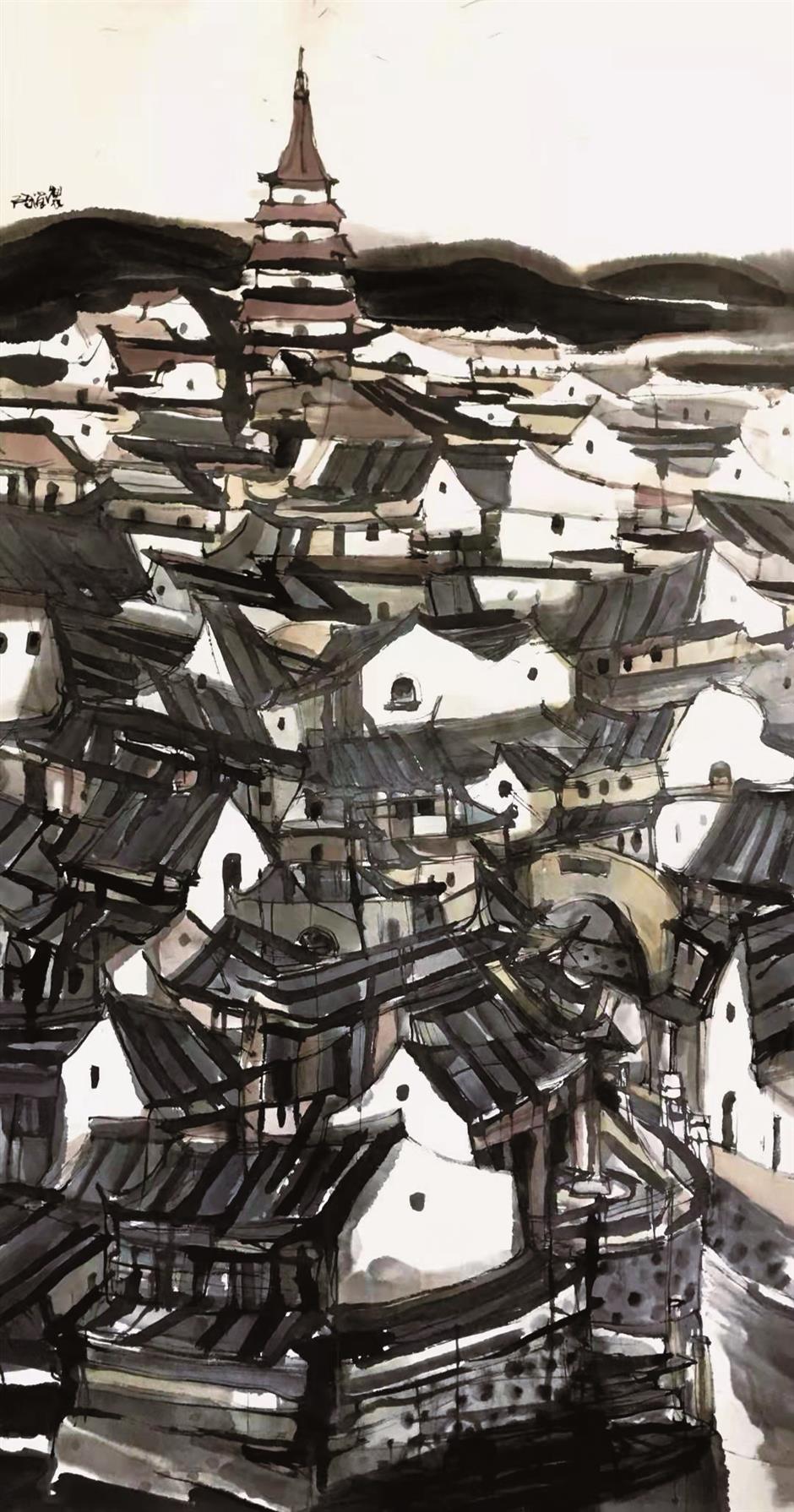 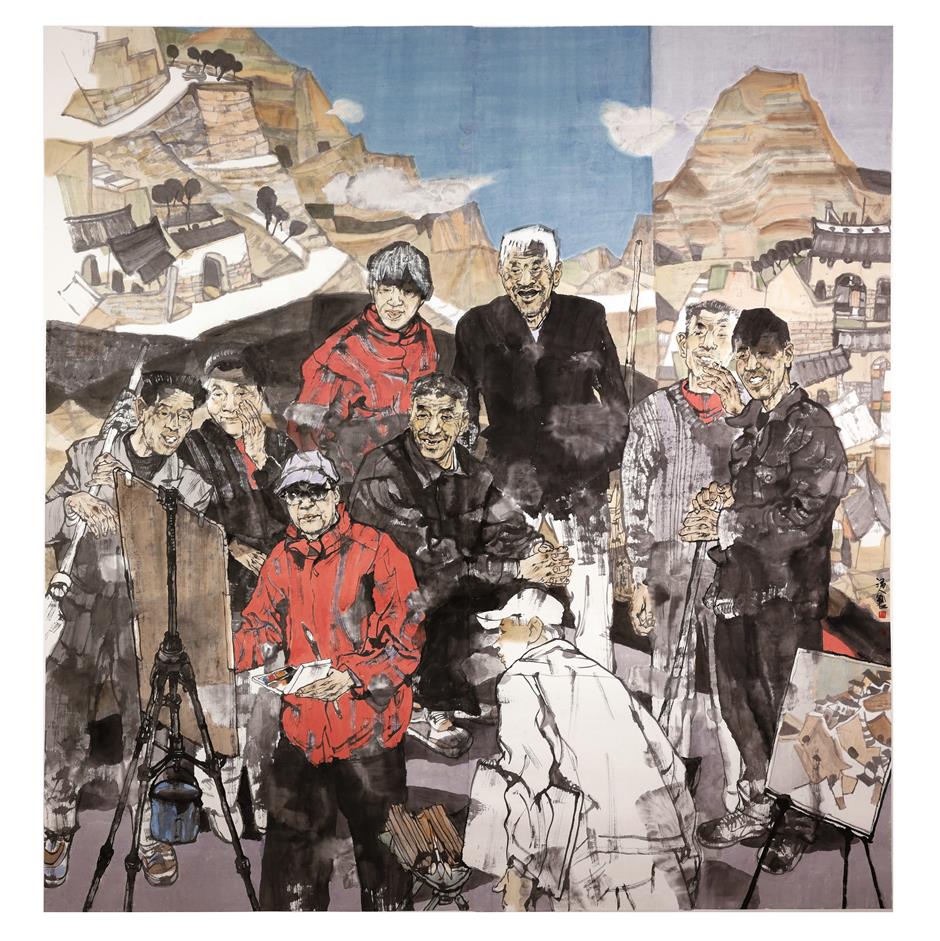 "Laughter in the Mountain" by Zhang Weiren