Xiaokunshan brings its glorious history back to life

Xiaokunshan Hill in Xiaokunshan Town stands in the southernmost part of Songjiang's "Nine Peaks" – the Shegong, Fenghuang, Xueshan, Sheshan, Chenshan, Tianma, Jishan, Hengyun and Xiaokunshan hills. Legend has it that Lu Ji (AD 261-303) and Lu Yun (AD 262-303), grandsons of Wu Kingdom (AD 222-280) general Lu Xun (AD 183-245), spent years hermetically studying on the hill and came to be recognized for their literary talents. The Xiaokunshan Town, where the hill is located, used to have 10 famous scenic spots, some of which, due to vicissitudes of time, went into oblivion. Recently, the town reestablished 10 new "scenes of Xiaokunshan" for visitors to experience its landscape and culture.

As a Chinese saying goes, "Any mountain can be famous with the presence of an immortal." The Xiaokunshan Hill, 54.3 meters in height, is famous for two brothers – Lu Ji and Lu Yun, renowned men of letters in the Western Jin Dynasty (AD 265-317). The Thatched House of Lu Brothers in Xiaokunshan Park has been built in memory of the two brothers, who, after 10 years' hermetical study on the hill, started their officialdom in Luoyang, capital of the Western Jin Dynasty. The two brothers were later killed in political turmoil.

As cranes were a symbolic animal in ancient Songjiang, Lu Ji, the elder brother, said, "Can I hear once again a crane's whoops, that remind me of my hometown?" A replica of "Pingfu Tie," Lu Ji's calligraphy work and one of the earliest of its kind in China, is displayed at the Thatched House of Lu Brothers. (The original work is preserved at the Palace Museum in Beijing). Stone-carved letters can be spotted on cliffs around the Nine Peak Zen Temple on the hill. It is said that the two brothers' reading platforms used to be around there. 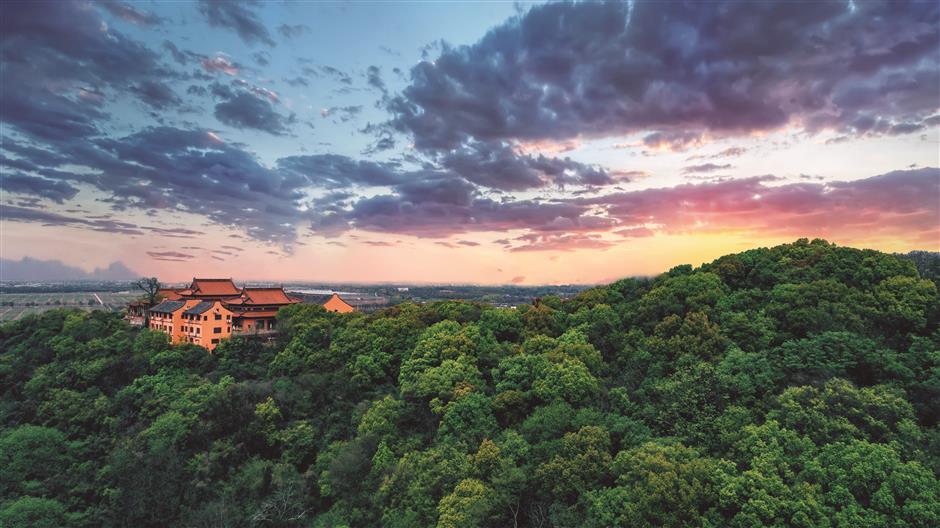 The Xia Family Park in the north of Dangwan Village of Xiaokunshan Town has been constructed to commemorate Xia Yunyi (1596-1645) and Xia Wanchun (1631-1647), father and son who died fighting the Manchu troops in Songjiang during the transitional period between the Ming (1368-1644) and Qing (1644-1911) dynasties.

In 1644, the Ming Dynasty was overturned. When the Qing Dynasty army, led by the Manchus, headed south and broke through the Jiangnan areas (regions south of the Yangtze River), Xia Yunyi resisted the Manchus but failed. He chose to commit suicide by drowning himself. Before his death, he urged his son Xia Wanchun to give their family properties to the army and fight the Manchus.

Xia Wanchun, a gifted poet, was overwhelmed by grief and swore to fight the Manchus. During a wipeout by the Manchu troops, the army Xia Wanchun had joined was destroyed and he was captured. Xia Wanchun was killed, together with 30 others including his father-in-law, after the enemy had lured them to surrender.

Qian Qinzhuan, Xia Wanchun's wife, after experiencing the death of her father, husband and son, became a Buddhist nun for the rest of her life. Chen Yi (1901-1972), the first mayor of Shanghai, wrote inscriptions for the tomb of the Xia family. In June, 2010, the park was listed as a patriotic education base in Songjiang. 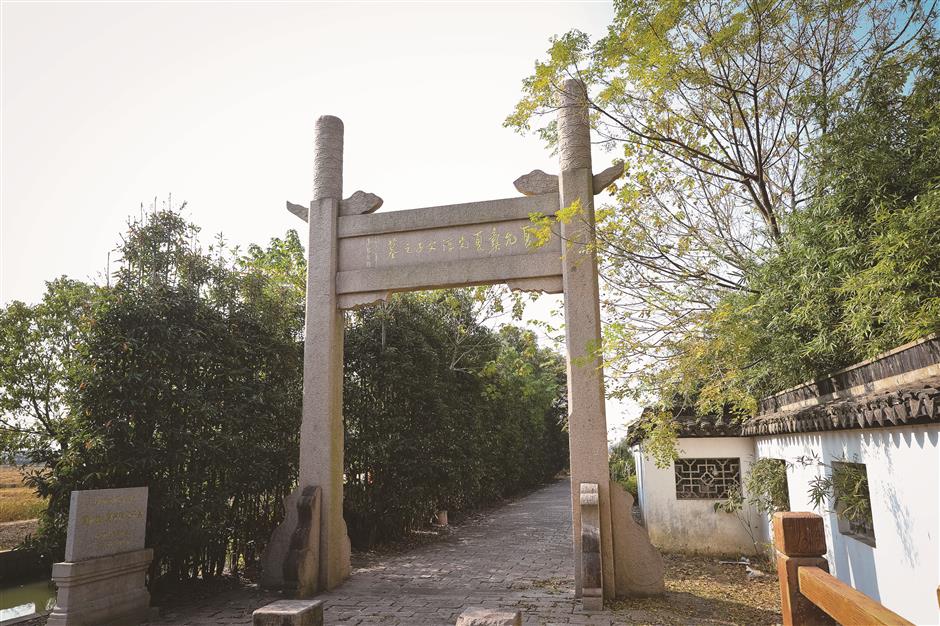 The Tangmiao Village Culture Relics Site, 11 kilometers west of downtown Songjiang, was discovered during an archaeological survey by Shanghai Cultural Relics Administration Committee in 1962. The site was listed as a city-level cultural relics site in 1977. The many ancient cultural relics along the banks of the Huatian River of the village were unearthed in December 1980. The site covered 64,000 square meters and consisted of two phases of relics.

The later-phase relics were found about 1.34-2.20 meters below the earth and included early and late pottery culture period and Han Dynasty (206 BC-AD 220) stone knives, pottery jars and pieces. The earlier-phase relics were about 2.20 meters below the earth and mainly include four tombs. The burial objects, dating back to roughly 6,000 years ago, consist of stone hatchets, plows, pottery cauldrons and cups.

Songjiang now boasts three 1,000-plus-year-old ginkgo trees. One of them, the No. 0006 in Xiaokunshan Town, survived a fire. In spite of the blaze, new branches grew out of the burned bark, and the new tree and the old tree now look like a grandfather hugging a grandson. To protect the ancient tree, the suburban district's greenery authorities have set up a park around the tree that includes other plants such as osmanthus trees and Chinese black pines, a lawn and a pebble-strewn path. 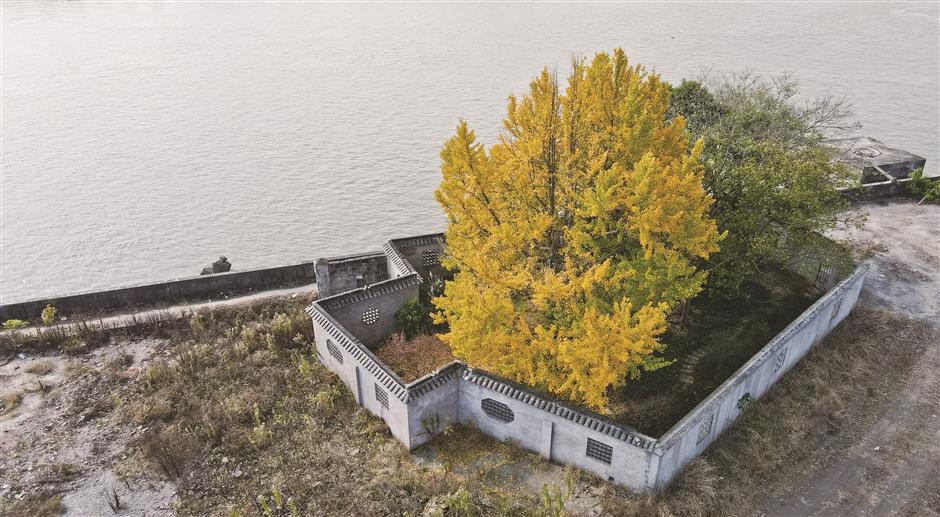 The Ringing Slab Bridge, or Xiangban Bridge, stretches across the northeast end of a village river in Xiejia Village of Xiaokunshan Town. The bridge dates back to the Qing Dynasty and it is said that the resemblance of its pier structure to a pair of bells allows the walking steps of people to be augmented, and hence its name "Ringing Slab Bridge." The bridge is also called Yongxing Bridge because its architect's given name was Yongxing. 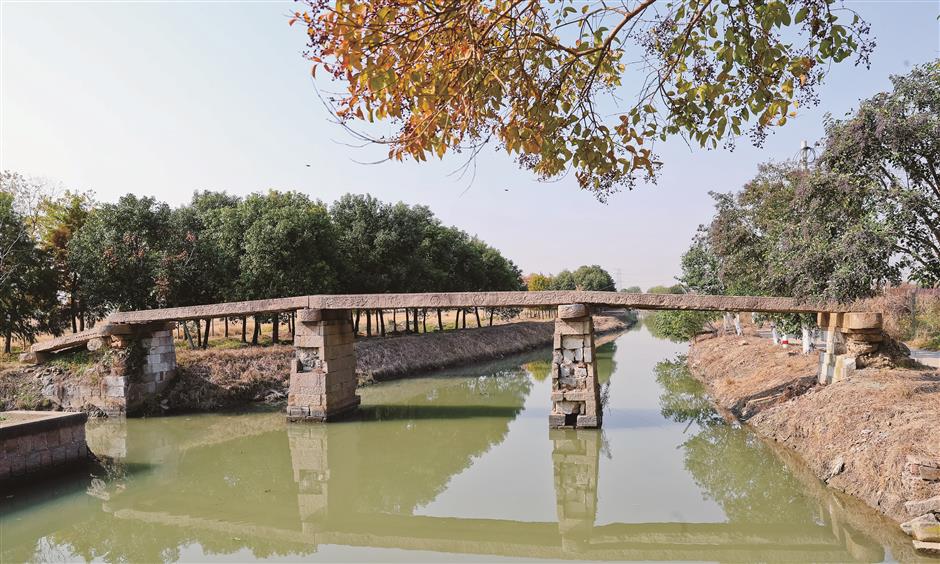 The Chen Family Old Residence is a Hui-style architecture preserved inside the Xiaokunshan Industrial Park. Archaeologists said it was built around the 1920s-1930s. The residence used to belong to a well-off Chen Family in the region. As industries are developing in the town, its surrounding architectures have been dismantled, leaving only some farmland and clearings as boundaries to protect the residence. 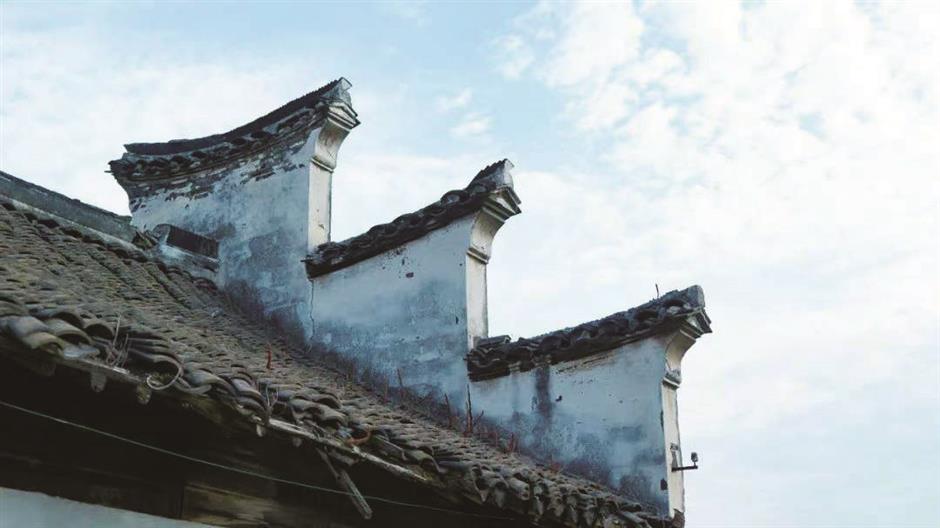 The Xietang Bridge Relic Site is along the old Shanghai-Hangzhou railway in Songjiang District. Construction of the old No. 34 Railway Bridge that used to stretch across the Xietang River is said to have been supervised by newspaper tycoon Shi Liangcai (1880-1934) when he worked for Jiangsu Railway Company. The bridge was also a witness to the patriotic Railway Protection Movement in May 1911. Patriotic squires and merchants in Jiangsu and Zhejiang funded to pay for the construction of the bridge in Songjiang instead of accepting loans from imperialist countries. In the 1970s, a new railway bridge was constructed across the Xietang River with the old one that had served for nearly a century blasted and dismantled. A bridge approach was preserved and later listed as an immovable cultural relic in Songjiang in June 2013.

The three other new "scenes of Xiaokunshan" are the Jiangnan Rice Park, the Rice Culture Museum and three cherry avenues. The rice park and the rice culture museum, which are being constructed, will offer visitors beautiful idyllic scenery and information on rice history, culture and technologies. The three cherry avenues, with their annual romantic cherry blossoms, are said to have helped the town attract investment. 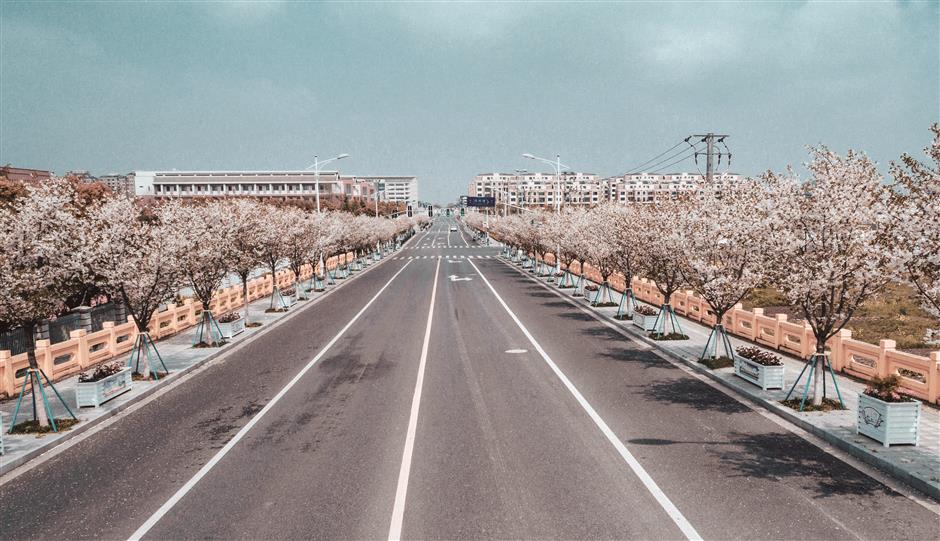