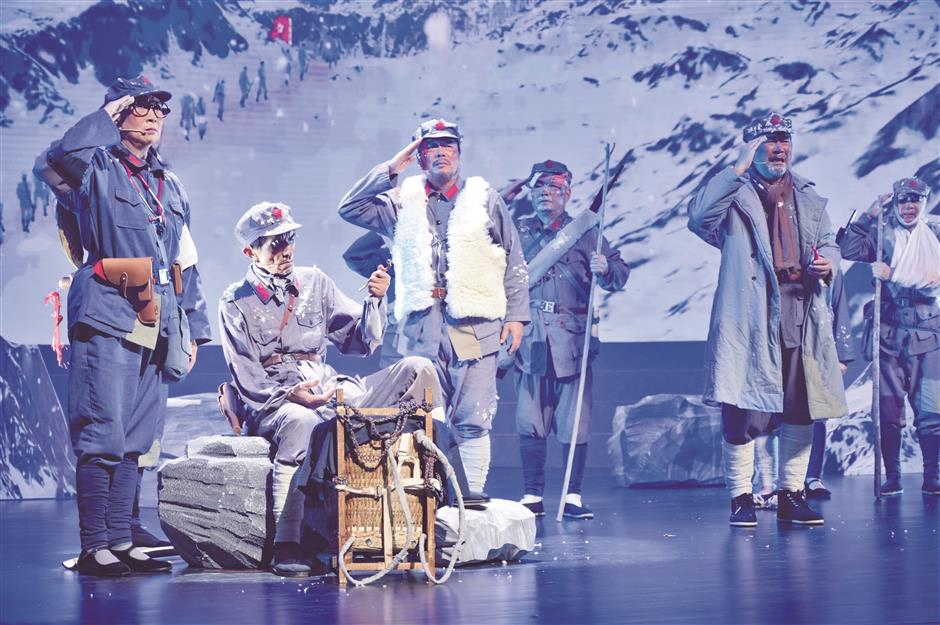 "Salute" is a stage production that tells a touching story about a group of Red Army soldiers during the Long March.

Two decades ago, Tong Niu, a retired military art troupe solider and middle-aged director, had been performing filial duty for 16 years to an unrelated senior singleton – sending meals to him, watching him happily be in love and then break up, paying his costly medical bills and finally fulfilling his final wish by burying him at sea.

"I did these things for him because we all are going to be old one day," said Tong.

Tong is 73 years old and his new identity is that of a drama teacher at Minhang College for Seniors. In 2021, "Salute," a stage production that tells a touching story about a group of Red Army soldiers during the Long March (a strategic and great trial for the Communist Party's Red Army) and features Tong and his 17 elderly students at the college, won the best original award at the 16th Shanghai Senior Education Art Festival. 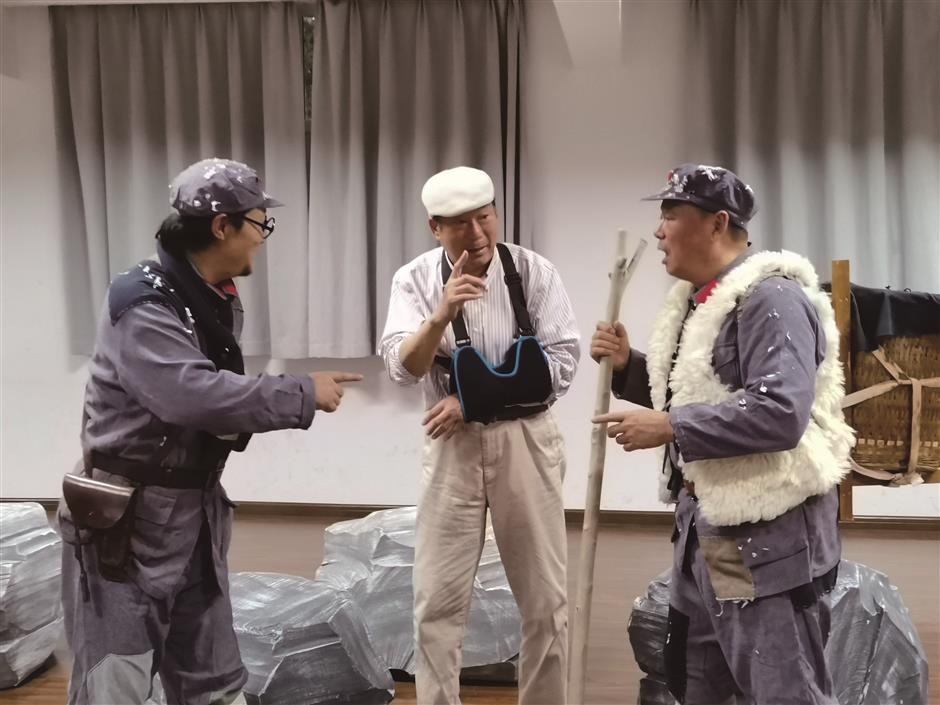 Tong Niu (center), a retired military art troupe solider and former director, is teaching a group of seniors to act a drama.

With an average age of 66, the 18 seniors spent more than 150 hours rehearsing the play. Tong, the oldest of them, wrote, directed and starred in it.

"Leading a group of seniors to act in a play is a rewarding experience, but it might require 10 times more effort than teaching younger people," said Tong. "One of my students had a strong tendency to exert his sense of presence by challenging me frequently, and another would throw tantrums and threaten to quit rehearsals when he was in a bad mood."

Yet Tong enjoyed his new role as a seniors' school drama teacher.

"Seniors' activities seem to always be choir singing, dancing and poetry reciting. The school and I hope to improve on that," said Tong.

The majority of his students' devotion to the play moved him. Peng, who played the role of the military supply head who had few lines but was nevertheless an essential role, practiced remaining motionless like a frozen figure in front of a mirror at home. Liu, who played the role of a military cook and had many lines, rehearsed the play with his wife at home. Zhang, who lives in the eastern Pudong New Area, would spend four hours commuting to and from rehearsals. 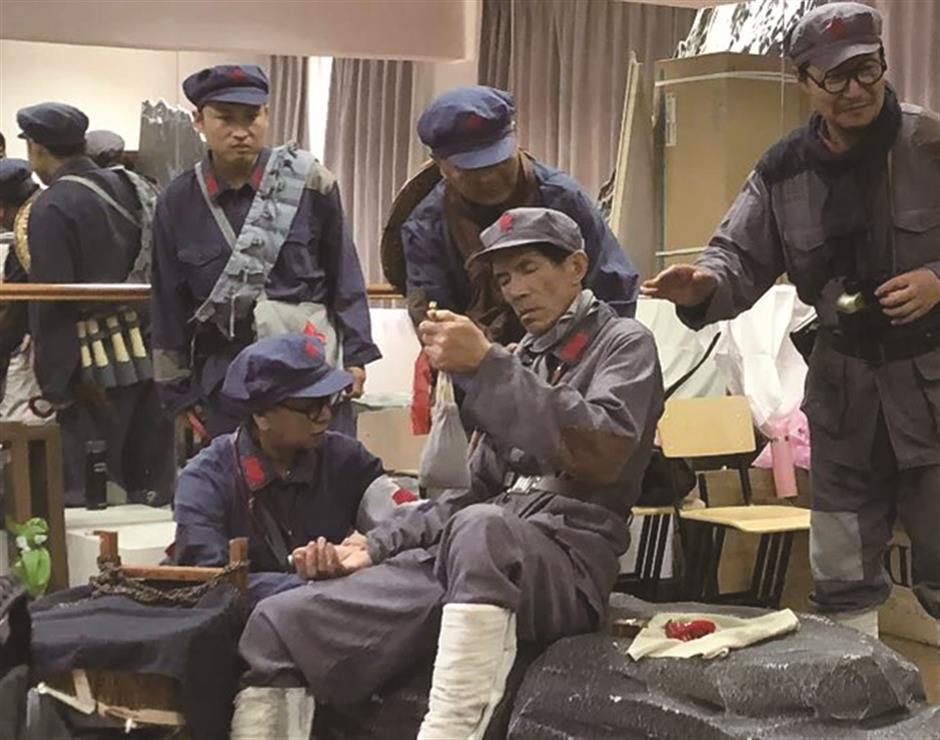 Seniors at the Minhang College for Seniors rehearse the play "Salute."

"The military uniforms we bought as costumes were too new to look like real worn-out uniforms. One of my students, a woman who comes from a very well-off family and rarely does housework, volunteered to break them in. Also, we saved on expenses by using our own clothes and carpets as props," Tong said. 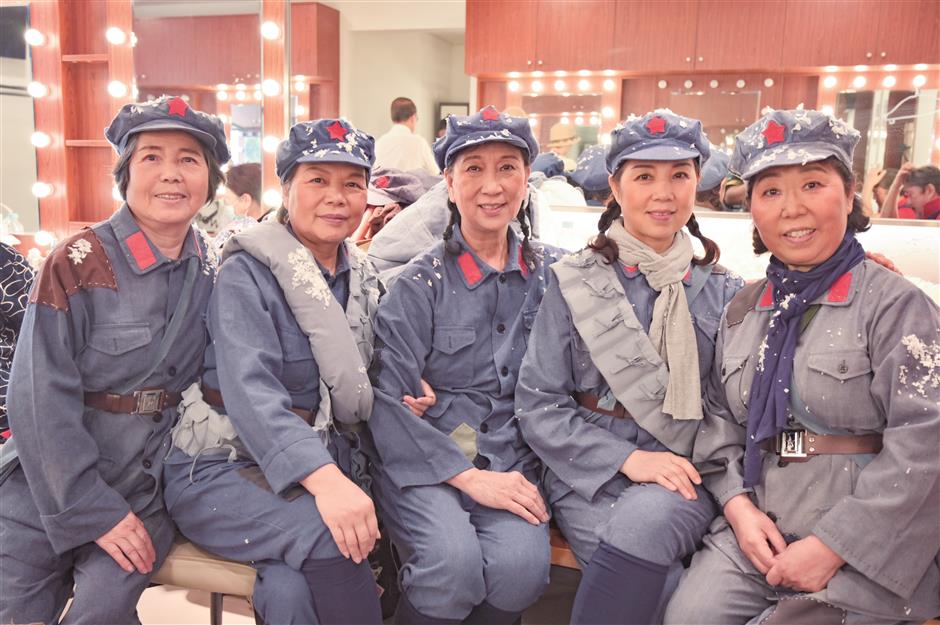 Some ladies among the drama students take a group photo.

Shortly before the art festival, Tong was involved in a traffic accident in which he sustained multiple fractures. He begged his doctor to operate on him as soon possible. Three days after having stitches removed, he was back at rehearsal with 20-some nails inside his body. "I used to be a military man, and directing a soldiers' play and playing the role of a commander isn't something I would think of quitting," Tong said.

The 13-minute drama was finally staged, winning praise and tears from both judges and the audience. 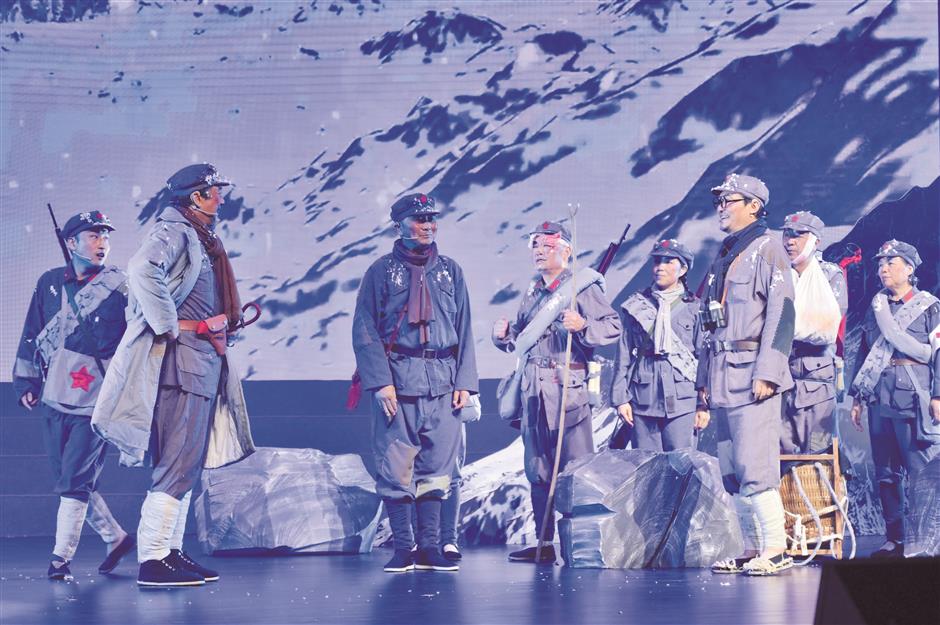 A new round of recruiting for the drama class will take place at the school.

"We'll test the applicants based on the four criteria required for performing arts: their movement and physical mobility, how they deliver lines, their vocal conditions and how they perform on stage," said Tong.

Schools for seniors often have no academic year-length restrictions, which means some students can stay at the school for as long as they wish and others may have difficulty getting in, according to Zhang Weihong, head of the college for seniors.

"We're thinking about finding more venues for our drama classes. What's more, we hope our school will have an academic system that enables some to graduate and new students to enroll and share this scarce social resource," Zhang said.

Tong is still recuperating, and the amount of effort required to recover sometimes upsets him.

He remembered the day he visited the elderly singleton for the first time.

"He lived alone in a narrow room piled high with daily necessities. A spittoon in a corner served as his toilet. At that moment I realized we all are going to be old one day," Tong said. 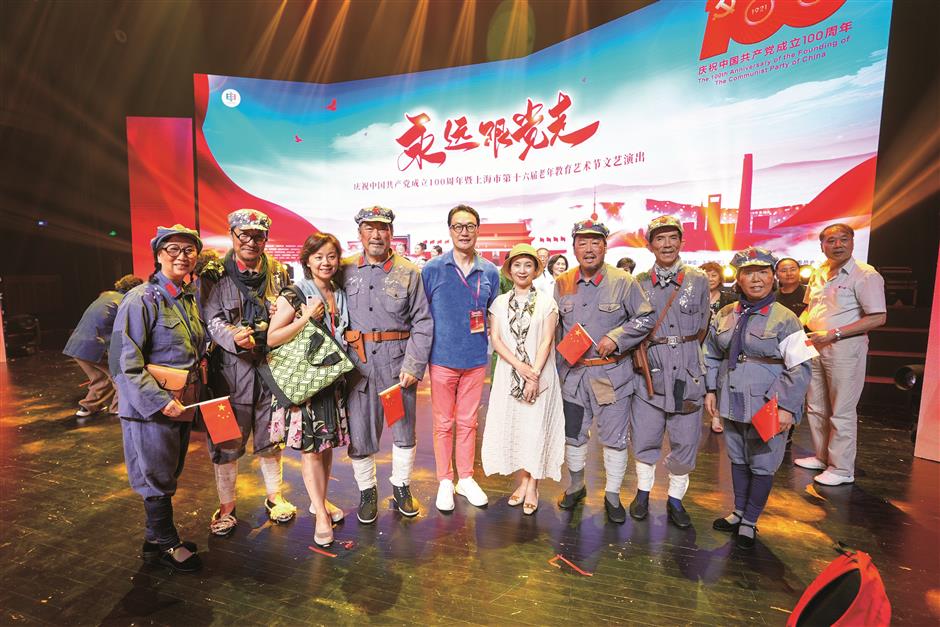 Actors and actresses of "Salute," teachers and headmaster of Minhang College for Seniors pose for a group photo.