"Bangladesh and China are both my homeland," said the fluent Mandarin speaking Bengali, who prefers to be known by his Chinese name – Zha Kan.

"I was confident starting my own business in China. The business is booming just a month after attending the CIIE which was held through November 5 to 10 last year in Shanghai," he said.

During the CIIE, he displayed hundreds of beauty and personal care products that contain unique plants from Bangladesh, such as henna which is used to make cosmetics.

"Some visitors wanted to know more about or experience the products, while some were eager to negotiate cooperation intentions, which I had never expected," said Zha Kan. "After these orders all reached agreements, the volume of trade is hundreds of times increased this year," he said excitedly. "I think the Expo is a great chance for foreign companies to develop in China. There is a huge market here."

Zha Kan and Xie Fengjun, his partner and alumni of Shanghai's Tongji University, delivered the first batch of goods that were agreed upon during the CIIE, including 10 boxes of personal care products and tea leaves, on December 10. 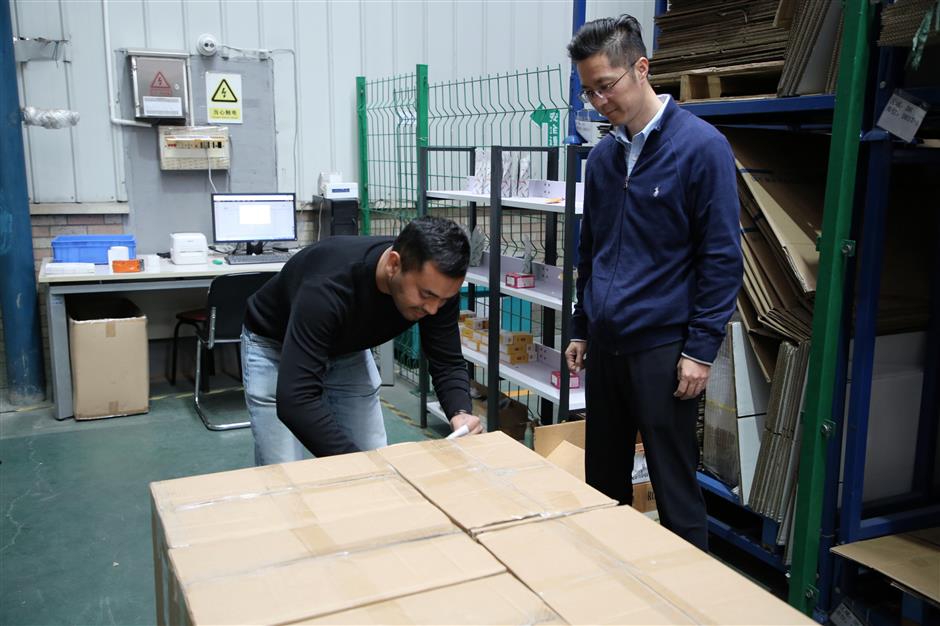 Zha Kan (left) and Xie Fengjun, his partner, delivered the first batch of goods that were agreed upon during the CIIE, including 10 boxes of personal care products and tea leaves, on December 10.

In fact, Zha Kan has had a dream to do business with Chinese for a long time. The idea originated from his father who was engaged in Sino-Bangladesh trade, exporting furniture from Foshan City in Guangdong Province.

"In the past, most local furniture was made of solid wood which had many disadvantages such as slow manufacture, high price and heavy weight," said Zha Kan. "Then my father noticed that the furniture made in China that used high density fiberboards had competitive prices and was easy to put together. They were suitable to standardized export and could be produced in batches."

The "Made in China" products become popular in Bangladesh, and the business flourished. Even though a lot of importers followed their steps, the family business kept leading throughout Bangladesh.

The young man became fascinated when he listened to the stories about China told by his father.

When still studying in Dhaka University, a top university in Bangladesh, Zha Kan started to help at the business, and as the business became larger, Zha Kan hoped to learn more about China and seek broader opportunities.

So he enrolled in Business Management at the School of Economics and Management of Tongji University as a graduate in 2009. The first chance came as the Shanghai World Expo was due to be held in eight months.

He offered to work as a member of the first group of 35 expat volunteers and was assigned to the Africa Pavilion. The six-month experience expanded his insights into Sino-Bangladesh trade.

"The expo was a big stage for showing different cultures of countries around the world, and a great opportunity for me to learn about Chinese culture," he recalled, still excited about his experiences. 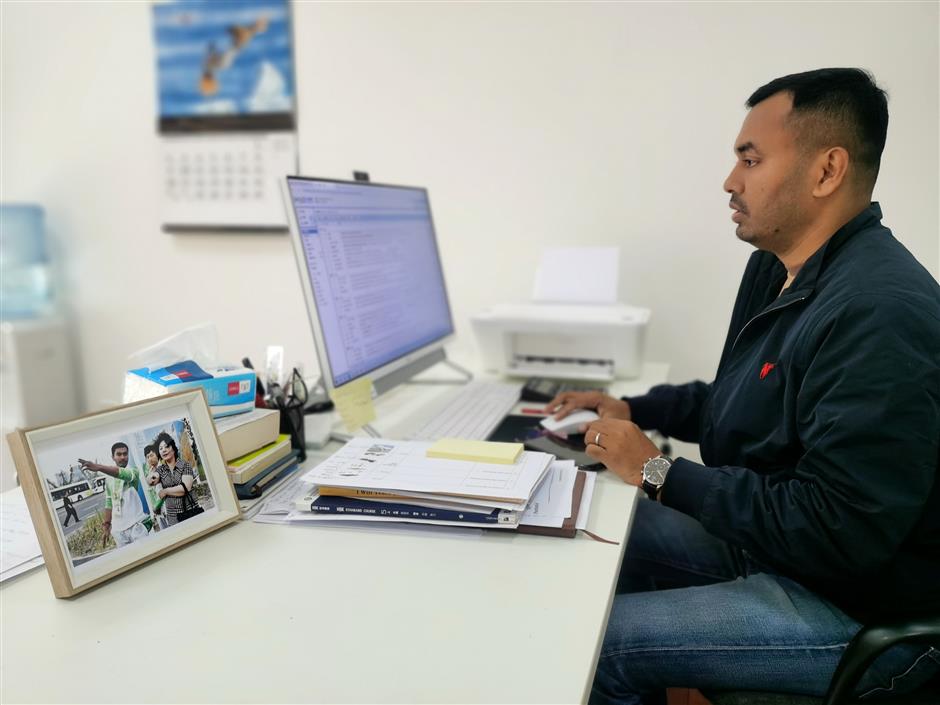 Zha Kan works in his office. The photo on the desk shows him working as a volunteer to guide visitors during the Shanghai World Expo in 2010 on the table.

Through the expo, Zha Kan witnessed the fast speed of the development and wideness of the opening-up of China.

So he used the advantages of region and language, helping his father import furniture from China to Bangladesh in his spare time.

Initially, there was no direct shipping line between the two countries, so furniture had to be moved from Singapore to the harbor of Chattogram City in Bangladesh, which took more than 20 days. Direct shipping meant less time and cost.

In 2017, his family started working on a factory in Bangladesh, introducing Chinese techniques and management to further reduce costs and increase efficiency. He also hired two Chinese mentors.

"I could see more Chinese businessmen walking on the streets, and they could speak fluent Bengali," said Zha Kan, when talking about the changes in his hometown. "The construction of buildings, power stations and railroads that China was involved in blossomed everywhere."

However, only five months after the factory opened in 2019, COVID-19 started spreading around the world.

The factory was shuttered, and their business nearly closed.

That was when Zha Kan was still in China, and he couldn't find a solution as well. Zha Kan didn't imagine that a great opportunity was coming.

A large number of Bengali asked him to source protective materials and cloth, while former classmates who live in the US also asked for orders of medical masks. 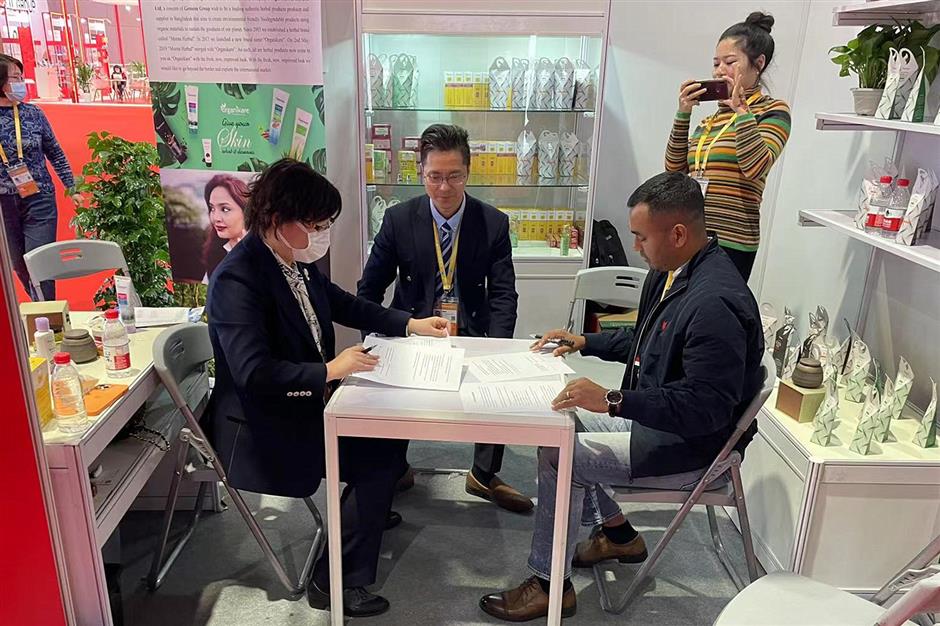 After witnessing the vitality of China's efforts combating COVID-19, he made up his mind to establish a business here.

In September, he moved his trading company to Nanxiang Zhidi Shine Land in Nanxiang Town which is only a 10-minute drive to Hongqiao Airport and the National Exhibition and Convention Center (Shanghai).

He also has a Chinese wife and lives in Jiading now. "I hope the pandemic can end soon so that I can have more opportunities to spread my stories of living and working in China to more people," said Zha Kan.