Qingpu District has made strong gains in social and economic development over the past five years to reach its "New Qingpu, New Life" goals.

Its core competitiveness and soft power have been boosted, and its economic and social development has reached new peaks.

The China International Import Expo held in Qingpu has opened a new gateway to the world.

The Yangtze River Delta Ecology and Greenery Integration Demonstration Zone has a huge development potential, and the Hongqiao International Hub is turning into an international central business district.

In a five-year period, Qingpu has made a significant leap and delivered stable economic growth.

Its gross domestic product surpassed 100 billion yuan (US$15.8 billion) for the first time in 2017, and last year's GDP growth was estimated at 5.8 percent, hitting 127 billion yuan.

Qingpu has derived fruitful gains from hosting CIIE over the past four years, and development progress of Hongqiao International Hub is in top gear.

The West Hongqiao Business District has acquired an agglomeration advantage, while Xujing Town where the expo is held is showing accelerated transformation and development.

A new international trading platform is developing and expanding rapidly in the town and helps power the economic growth.

As one of the "Five New Cities," Qingpu New City is unique for its beautiful environment, distinctive Jiangnan (regions south of the lower reaches of the Yangtze River) flavor and innovation core. 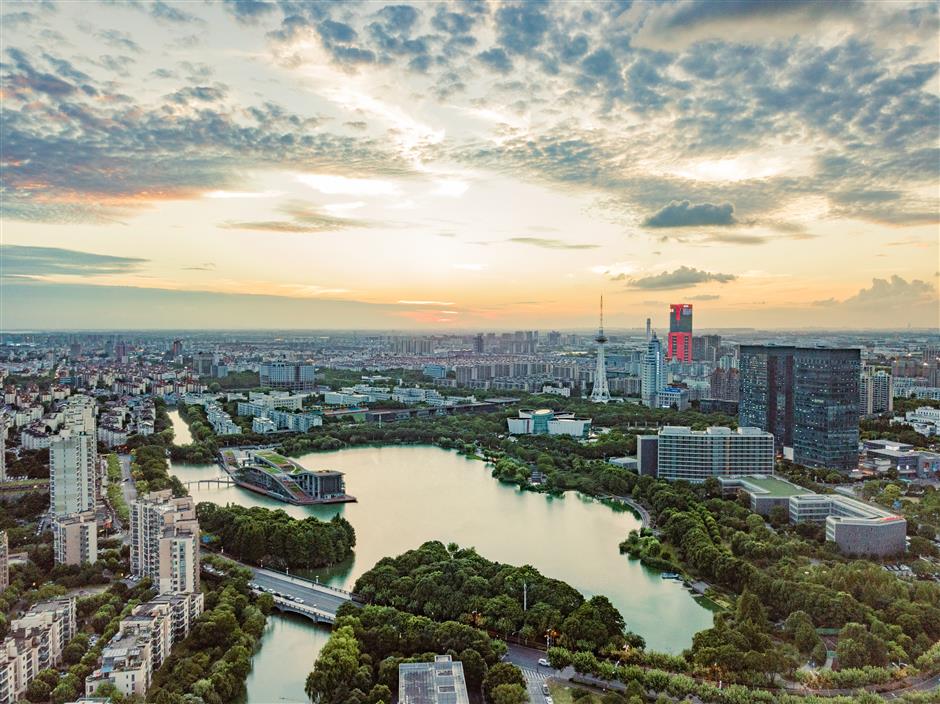 So far, 43 key projects with a combined investment of more than 100 billion yuan have been signed and a future-oriented city featuring high-quality living is taking shape.

By the end of last year, the district had registered 146,000 companies and has benefited from increased consumption levels in recent years.

A number of commercial complexes, such as Wanda Mall, have become new shopping landmarks and boosted the district's allure as the consumption center of the Yangtze River Delta region.

Construction of a trade and service-oriented national logistics hub yielded revenue from the express delivery and logistics industry of 135 billion yuan last year.

The Yangtze River Delta Region Digital Line project is in full swing thanks to a recently mapped-out ambitious blueprint.

Starting from Qingpu, the digital line bases on digital economy and relies on the G50 Expressway.

It will become an innovation and industry chain and cooperate and connect with Shanghai's neighboring cities to build a regional digital innovation development belt.

It will focus on areas such as the digital transformation of industrial parks, trade digitalization, digital governance and regional data cooperation and involve 12 tasks.

A hundred intelligent digital plants will be built by the end of 2027 at which time digital trade volume will have reached 20 billion yuan.