Morning rise – The fast and slow pace at Yangpu's Binjiang

The breath of an urban area contains the essence and warmth of a city. One day in Yangpu, life can be fast or slow paced, consisting of a jog on the Binjiang riverside in the morning, a cup of coffee on Changyang Campus in the afternoon or a comfort walk in NICE2035. One day in Yangpu, people can see the development pattern of the urban area and different rhythms of urban life. 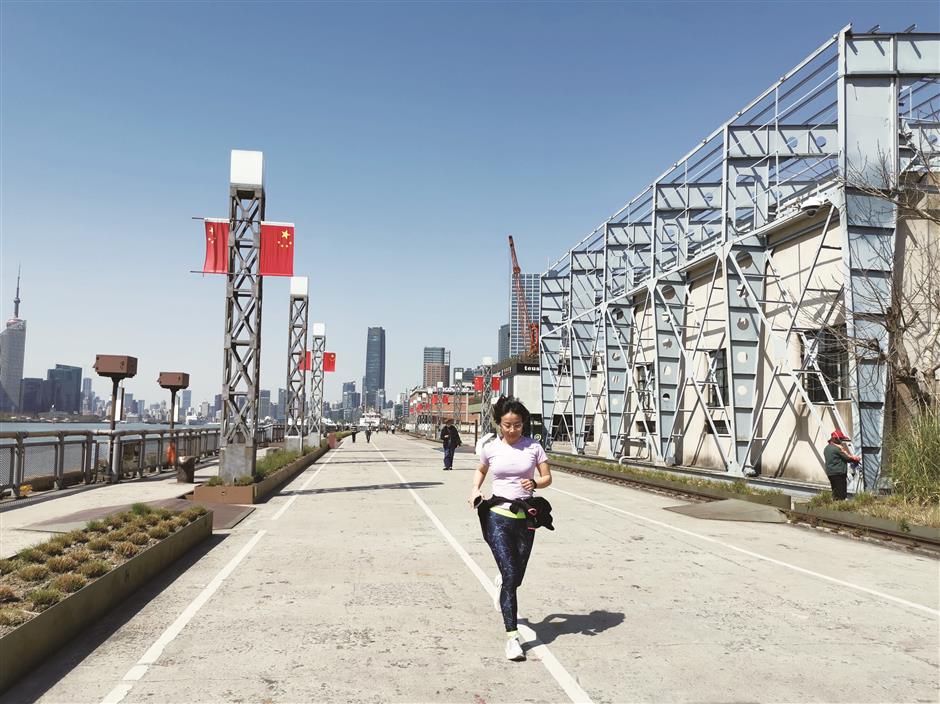 Lang Music World, which looks like a piano, reflects the shadow of the blue sky. The early birds have stretched themselves on the Binjiang promenade, unveiling a busy new day.

From a word to a theory, Yangpu integrates the concept of "the people's city" into the genetic code of urban development, fulfilling it with indomitable determination, meticulous tenacity and consistent perseverance.

The 5.5km coastline is "unlocked." The functional attribute of rust belt has made a round turn: the three paths for walking, running and cycling are connected, integrated with the "industrial heritage expo belt and waterfront view experience belt.

The Yangpu Urban Planning Exhibition Building is on the former site of The China Import Export Lumber Co, established in 1902. Since its opening, the number of visitors has exceeded 200,000.

Walking into the exhibition hall, the two-story exhibition space describes in detail the theory and vivid practice of the important concept of the people's city.

In the building, people review the development of Yangpu with the help of the latest technology; outside, citizens bask in warm sunshine, stroll along the Binjiang and watch the new style of life show belt intertwined with new life.

Gulls fly over the Huangpu River. Walk along the Binjiang of Yangpu as time goes by.

On the south section of the shoreline of Yangpu Binjiang, 66 buildings at 24 historic sites are planned for preservation, with a total construction area of 262,000 square meters.

In addition, there are a large number of distinctive century-old industrial relics, so everyone who comes to Yangpu Binjiang can "read" the architecture of the city, feel its texture and experience its unique historical and cultural features.

Shanghai Yangpu life show belt was listed in 2020 as one of the six national demonstration areas by the State Administration of Cultural Heritage for the protection and utilization of cultural relics.

Currently, in line with the principle of "reproducing the style, reshaping the function and re-assigning value," Yangpu Binjiang has taken the lead in repairing and protecting historical buildings, including a sugar warehouse and a textile warehouse.

In the future, it will also complete the repair of eight historical buildings in public spaces, covering an area of nearly 60,000 square meters.

Yangpu will strive to turn itself into a "world reception hall," working to be a world-class waterfront public open space full of vitality, green ecology, comfort and convenience.