A livestreaming lecture about Su embroidery, an intangible cultural heritage project in Jiading, was presented on March 5 by the district's leading exponent of the ancient craft.

Lecturer Chen Bixian explained the production processes involved in Su embroidery, introducing the inheritance and protection of the needlework craft in Jiading and sharing her stories about it.

Born into an embroidery family, Chen has studied the Su craft since childhood. Although born in the 1990s, Chen has devoted herself to this traditional handmade industry for more than 20 years.

As a native Jiading resident, some of her inspirations came from Qiuxia Garden and paintings created by Lu Yanshao (1909-1993), a Chinese art master who was born and raised in Jiading. 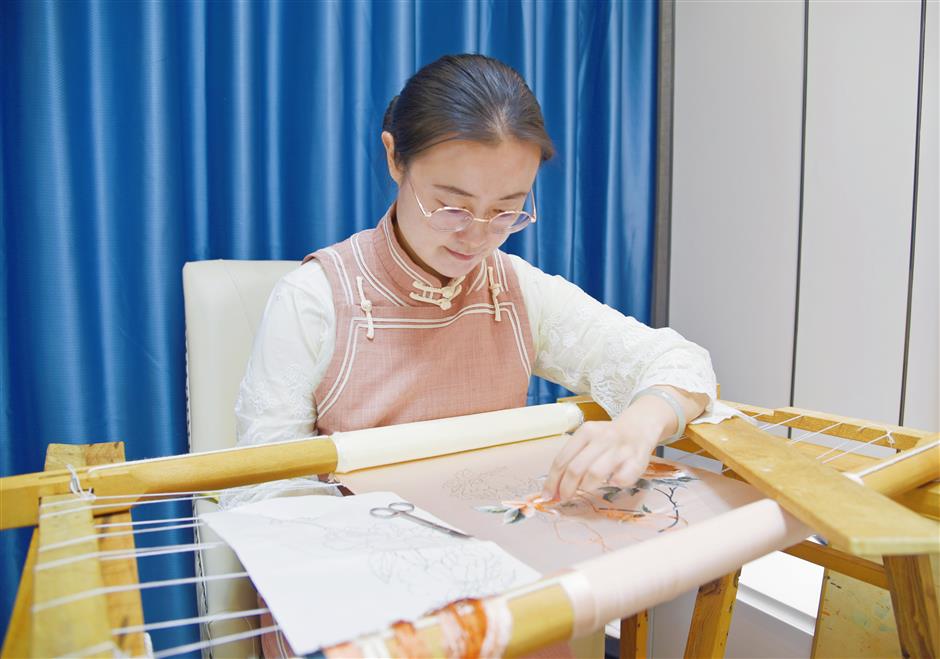 Chen Bixian, inheritor of Su embroidery, weaves via the tapestry method in fine silk and gold thread known as kesi.

The Sparrow, a Jiading ink-water painting style embroidery, is one of her favorites. Chen first split the embroidery thread and then applied empty space, coke ink and deep or light shades of colors that are commonly seen in traditional ink-water paintings to the product. 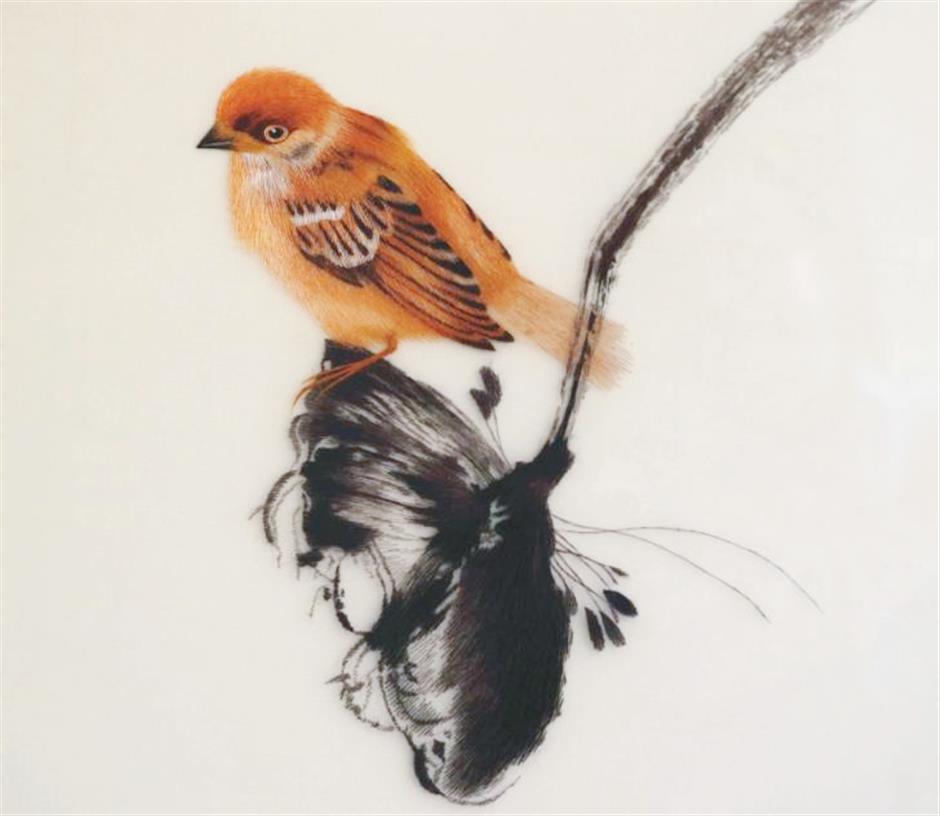 The Sparrow, a Jiading ink-water painting style embroidery, is one of Chen's favorites.

It requires a long time to grasp the skills of Su embroidery, including practicing the needlework and cultivating artistic aesthetics. Even if the embroiderer has a good command of the skill, it takes months or even years to embroider a complete work. As a result, embroiderers need to achieve high levels of both skill and patience.

"After the emergence of modern machines, fewer people, especially the young, are willing to engage in this time and labor-consuming work. The average age of embroiderers in many workshops is over 70," said Chen anxiously.

Invested with a drive to revive Su embroidery, Chen has become devoted to promoting it not only in Jiading, but also launching courses about the craft in universities such as Donghua and Shanghai Jiao Tong in Shanghai. She has also held exhibitions over many years at Yuyuan Garden, Shanghai Library and Maple Ink Art Museum.

Also, she cooperates with brands such as Mercedes-Benz to design and embroider ancillary products. Her works were on display at the China International Import Expo and were sent abroad as a national gift.

"Many people think that Su embroidery products are expensive but, in fact, this is not true," said Chen. "To bring Su embroidery closer to life, we combine the embroidery technique with daily necessities to make practical products such as fans, wallets, handkerchiefs, mirrors and masks that are deeply loved by young people."

Among Chen's students, in addition to professional embroiderers who wish to become her apprentice, are many amateurs attracted by the embroidery. Even some young white-collar workers have been introduced to the craft by psychotherapists as a means to relieve pressure by making embroidery products. Chen also teaches Su embroidery skills to unemployed and disabled groups throughout the city so that they can master a craft to make a living. 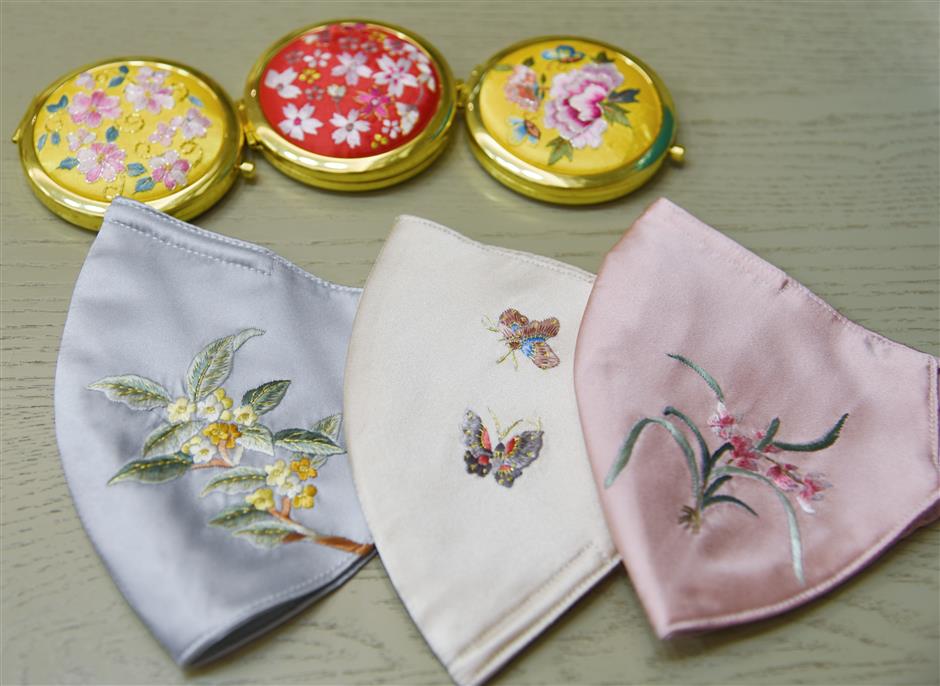 Silk fabrics made by Chen and her students.

"Some special children are sensitive to colors. They have tender hearts and are willing to get down to embroider. They may have a different world in their eyes compared to ours, but you can see their talents through the embroidered pieces," said Chen.

Apart from offline teaching, she has also brought Su embroidery into the livestreaming studio and attracted a large number of embroidery lovers.

In November 2021, the Su Embroidery Technique applied by Chen was listed in Jiading's 11th batch of intangible cultural heritage products. She has made up her mind to make the protection and promotion of Su embroidery as her lifelong career.

She is now preparing activities to take Su embroidery into communities and plans to cooperate with schools to set up lectures and experience courses.

"It is delightful to see my work recognized, but I know it is only a small step and I have more to do. I will inherit Su embroidery techniques with awe and the spirit of craftsmanship," said Chen. 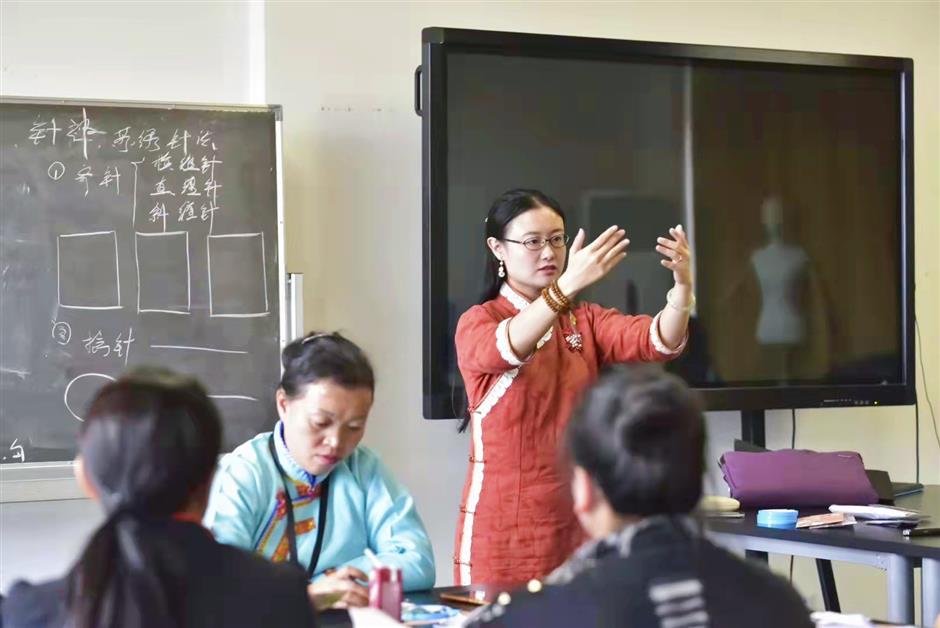 With a history of more than 2,500 years, Su embroidery is famous for its pretty design, harmonious color, sprightly lines, lively needlework and fine workmanship.

Originating in Suzhou City in neighboring Jiangsu Province, the art has become popular along the Yangtze River Delta Region.

During the Three Kingdoms Period (AD220-280), Sun Quan (AD182-252), founder of the State of Wu, once ordered the sister of prime minister Zhao Da to embroider an atlas map which is said to be "a brocade with all states."

During the Ming Dynasty (1368-1644), the Yangtze River Delta region became the center of the silk weaving industry where Su embroidery, which is also called painting drawn by needles, became popular.

Jiading has retained the traditional Su embroidery craft and formed a unique ink-wash painting style under the influence of the paintings of Lu Yanshao, a renowned Jiading artist.

In addition to doing their embroidery, the inheritors of Su craft launch various charity activities, aiming to display the folk art of Jiading and developing Jiangnan (regions south of the lower reaches of the Yangtze River) culture.