Increasingly, more community lockdowns are taking place in Shanghai amid the "grid screening" to curb the coronavirus spread as cases are popping up. Life under quarantine is certainly kind of restrictive and inconvenient. But Jing'an has made every effort to ensure life goes on as near-normal for quarantined people, as well as relieving their tensions and making them feel the warmth. Let's have a look. 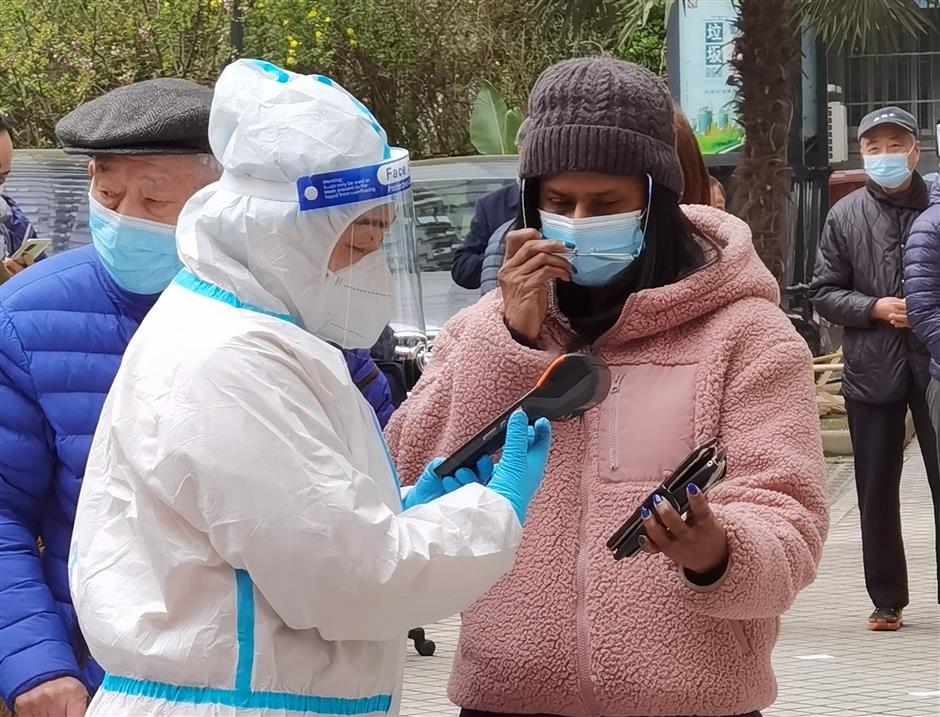 Volunteers help during the massive nucleic acid testing in communities.

Massive nucleic acid testing is quite a challenging task as it requires so many people, including community workers, police officers and medical workers. Thankfully, people working and living in Shanghai have stepped up to offer helping hands to maintain order and guide residents to do the testing.

But here's one thing different in Jing'an. Regarded as one of most attractive places for foreigners in Shanghai, the downtown district has seen many foreigners joining community volunteer work. Eva Serrano is one of them.

The Spaniard didn't hesitate to signed up as a volunteer as soon as she heard about "grid screening" in her community in the Jing'ansi Subdistrict.

"Everyone in society should be responsible for the prevention and control of COVID-19," she said, "I wanted to help medical staff."

Putting on a mask and protective gear, with a notice on her body saying "Please keep one meter in distance," she joined others to offer volunteer support at Siming neighborhood on Friday.

"We have two main tasks: remind testers not to stand too close to each other and help them register a QR code for nucleic acid tests beforehand," she said.

At her urging, eight of her colleagues also applied to be volunteers. 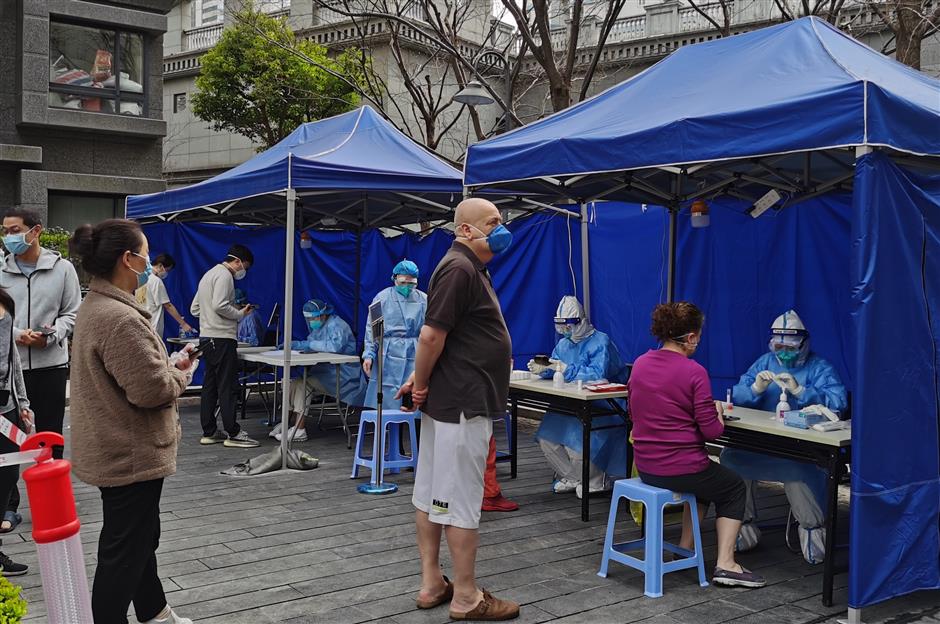 In the Shimen Road No.2 Subdistrict, community volunteers who are fluent in foreign languages come forward to explain the policies to foreigners.

"Please take your passport and open the Health Cloud APP. Thanks!" Weng Wei has repeated the directive nearly 100 times.

For foreigners, the language barrier is a major obstacle to keeping them safe and healthy during the epidemic. So, she has to maintain her patience to explain it again and again.

According to Wang Yiwen, common questions include "Where can I register for my QR code?," "How long will it take to know my test result?," "Where can I check my result?"

The different interface in English on the Healthcare Cloud app and registration process by passport has made it more difficult to take nucleic acid tests, she added. 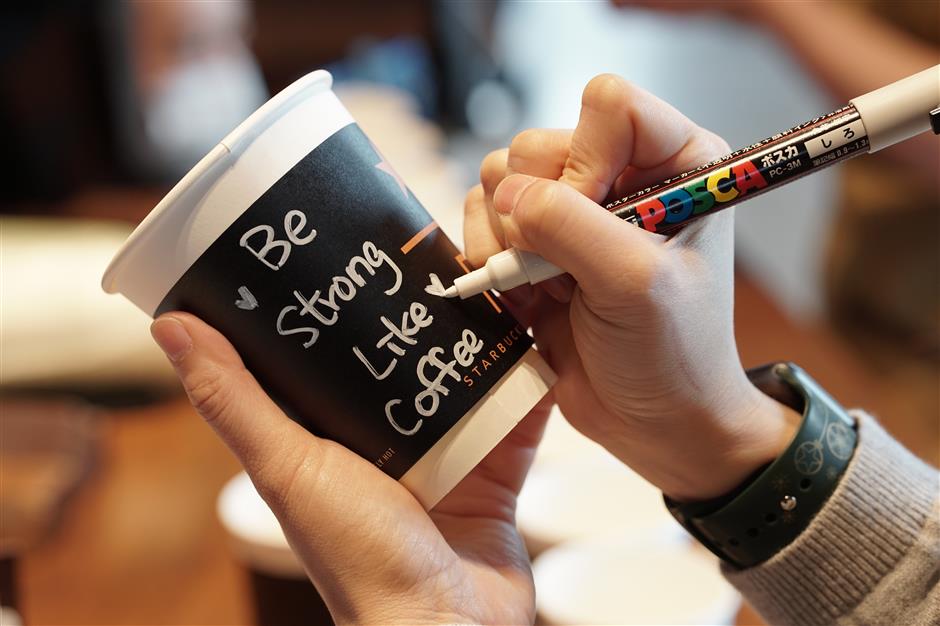 Jing'an, as one of the most bustling areas in Shanghai, is dotted with fancy office buildings and commercial complexes. What if people are quarantined away from home? Jing'an didn't lose sight of them. Free meals, toiletries, odds and sods, are offered. What's more, their needs after quarantine are also put into consideration. Take Park Place office building as an example.

It's usually a real scramble to get a cab in the city's bustling commercial zones around midnight. In upmarket Jing'an Temple area, it often takes overtime workers about an hour to hail a cab. So, when the lockdown of Park place was lifted, local Jing'ansi Subdistrict helped to muster nearly 1,000 cabs to pick up workers and take them home.

As more than 3,400 trapped in the building for two days stepped out of the building, they were surprised to find rows of taxis waiting to pick them up. In about 100 minutes, Shanghai's taxi giant Qiangsheng mobilized 938 cabs to drive 2,091 people home.

Also, each of them received a gift of xiangnang, a fragrant sachet filled with herbs as a metaphor to dispelling evil, from the time-honored TCM pharmacy chain Leiyunshang West.

A driver surnamed Zhang said it was his own way to cheer up the city to fight the pandemic. "It's what I can do, and I want to make some contributions," he said. 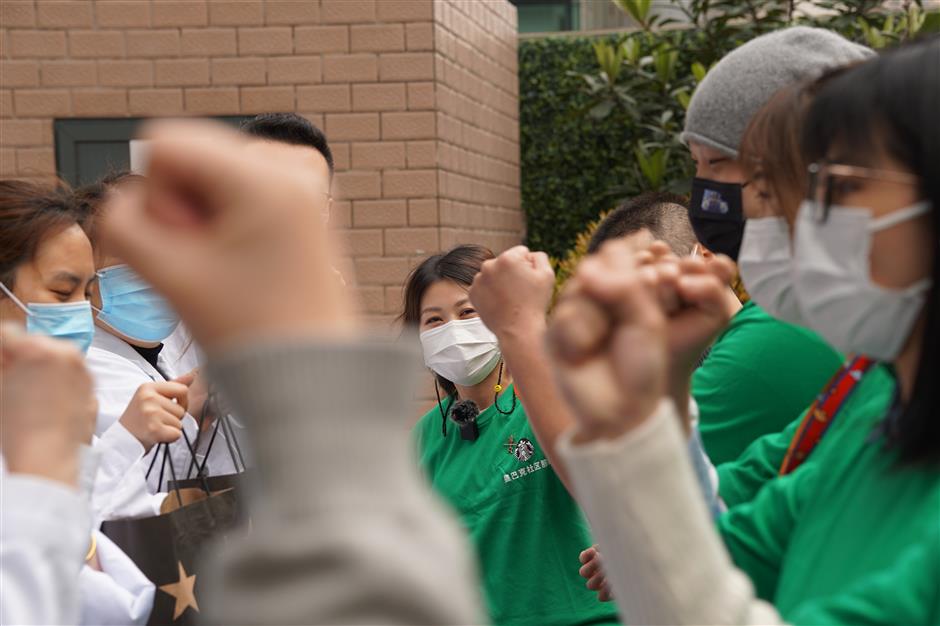 Meanwhile, front-line volunteers and medical workers have received a variety of gifts, like coffee, desserts and flowers, from local residents and retailers.

Of them, Starbucks Roastery sent 150 cups of coffee to the Nanjing Road W. Subdistrict to express thanks to the subdistrict's efforts to arrange nucleic acid testing for locals. Best wishes such as "Be strong like coffee" and "Thank you for safeguarding us" were written in the cups.

"We're so moved. I believe that we will beat the virus soon because we pull together," said Xu Huiming, director of the subdistrict's heath service center. 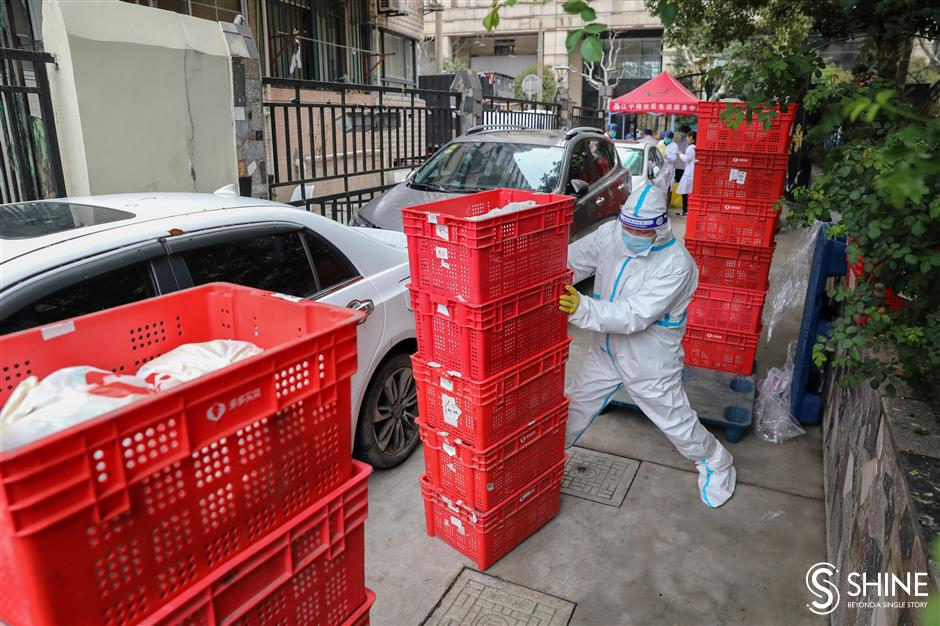 One of the strongest concerns for quarantined people is a stable supply of food. Amid community lockdowns, many people have to turn to online grocery platforms to access food, but it's not easy to get the orders in time due to a surge in demand. But Jing'an has stepped forward to send food to people's doorsteps.

"I received the pack quickly after I had done the second nucleic acid testing at the neighborhood gate. I'm so touched and so assured," an elderly resident surnamed Tao said. "I get rice, eggs, potatoes and greens. I plan to cook curry potatoes." 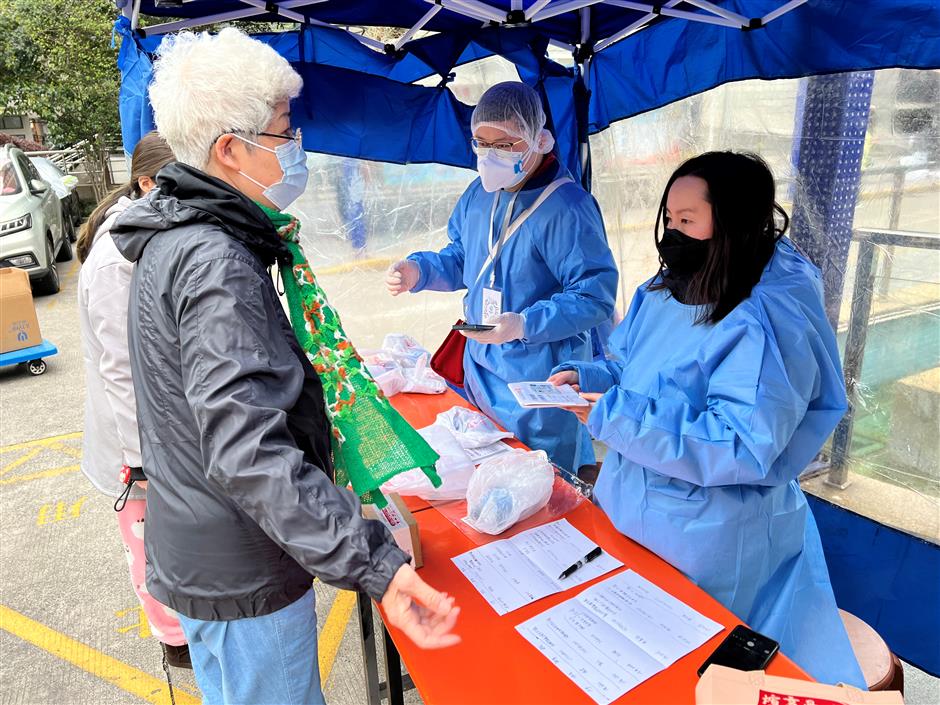 A resident uses medicine delivery service at a volunteer station.

Caojiadu Subdistrict is more direct. It sends lunch to the doorsteps of local senior citizens. Usually, it provides lunches to 200 elders, but amid the recent community lockdown, 20 more have been added to the list.

There are three regular deliverymen. They are required to receive nucleic acid testing within 48 hours, and every day they have their temperatures checked and their vehicles disinfected to ensure safety.

"I've been sending lunch to these elders for five years. Every day I send about 60 meals. They always thank me, which touches me," one of them, surnamed Li, said.

Another major concern is that there is nowhere to see doctors and get medicines.

As a solution, the Pengpu Xincun Subdistrict erected a makeshift clinic in the middle of a quarantined residential complex. Doctors from the subdistrict's health service center came to offer consultations and prescribe medicines.

The Zhijiang Road W. Subdiscit has sent volunteers to get food from hospitals for more than 60 senior residents. It took about four hours to get all the medicines they needed from Zhabei Central Hospital.

"I was so worried about finishing my medicine. But thank god you came to the rescue," Shao Weili said after receiving her new supply. 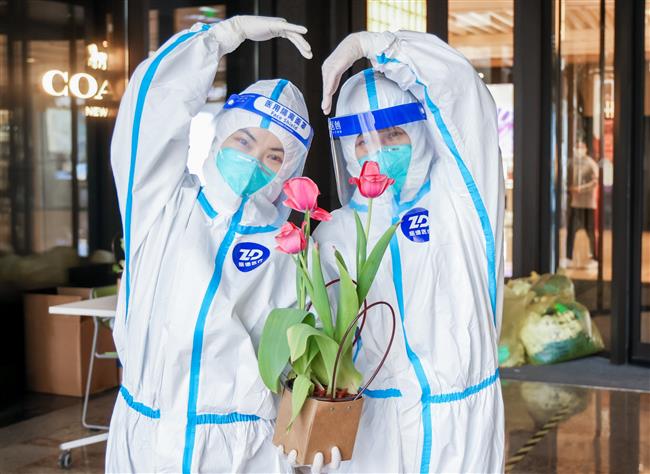 What better than spring blossoms to give us hope and a sense of renewal! So, when the two-day lockdown of the southern zone of Jing'an Kerry Center finished, every one of the 700-plus people leaving quarantine received a floral gift.

"Thank you," people said as they stepped out of the building and received the tulips.

MU shopkeeper Li Zaiqin said she felt worried at first about being in lockdown but soon her tension was eased as they received free sleeping bags, shampoo, food and other supplies. "We cared for and helped each other to go through the lockdown time," she said. 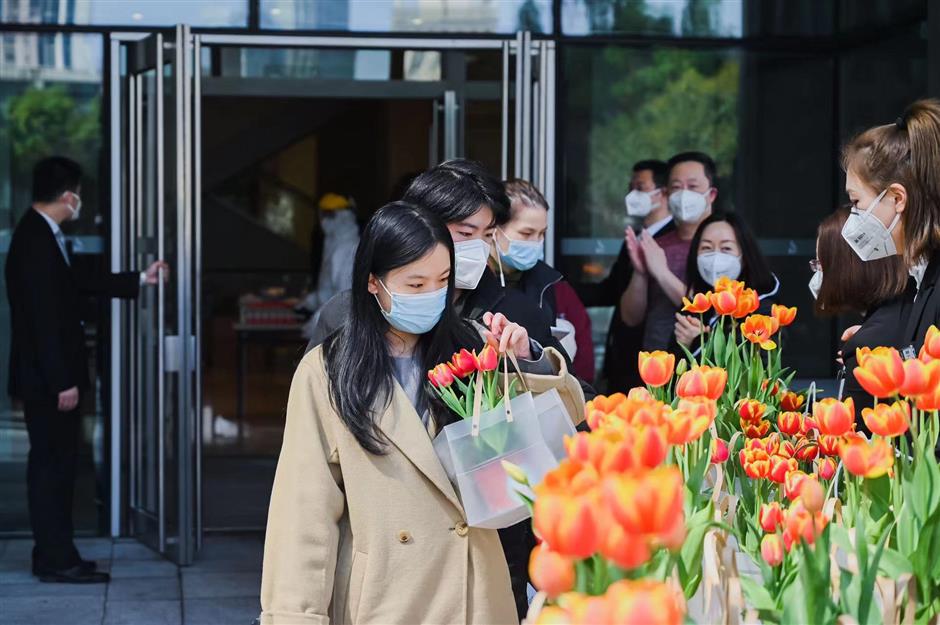 According to Jing'an Kerry Center, more than 20 eateries in the building offered free meals. And Jing'an Shangri-La especially made 240 sets of breakfast on the morning the lockdown was lifted.

People who went to receive nucleic acid testing in a temporary spot outside the HKRI Taikoo Hui also received tulips.

"I came to do the test during lunch break, it was so convenient," a nearby office worker surnamed Yu said. But she didn't expect to bring a potted tulip back to the office.

"It was such a big surprise. I love tulips the most, and it will sure light up my office. Spring has come. I can feel it. And I believe Shanghai will beat the pandemic soon," she said.