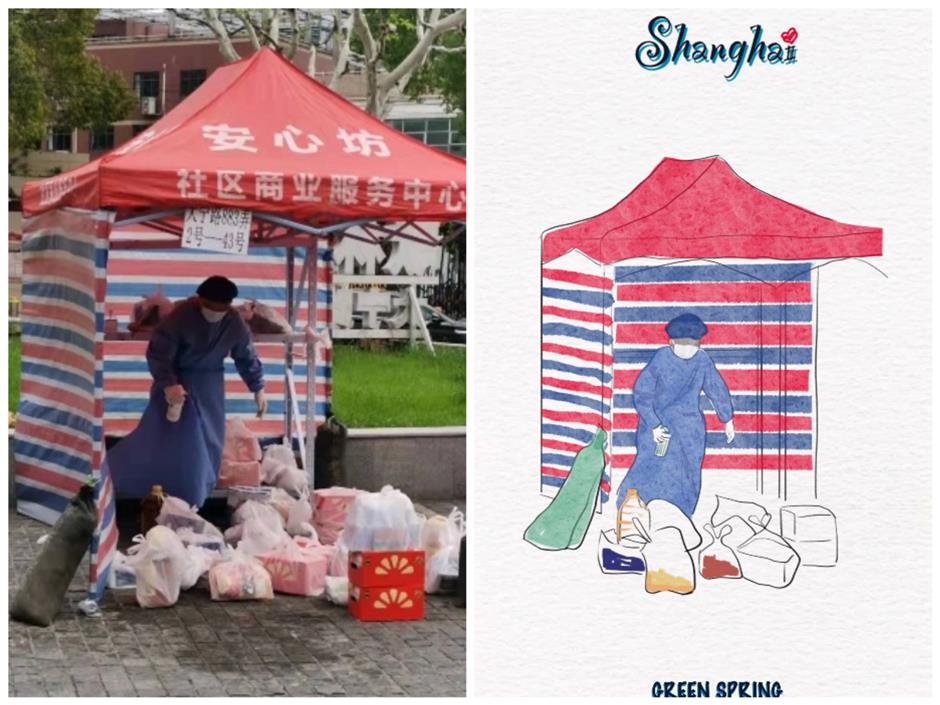 A sketch depicts the scene where a volunteer disinfects the delivery goods before dispatching them to local residents. 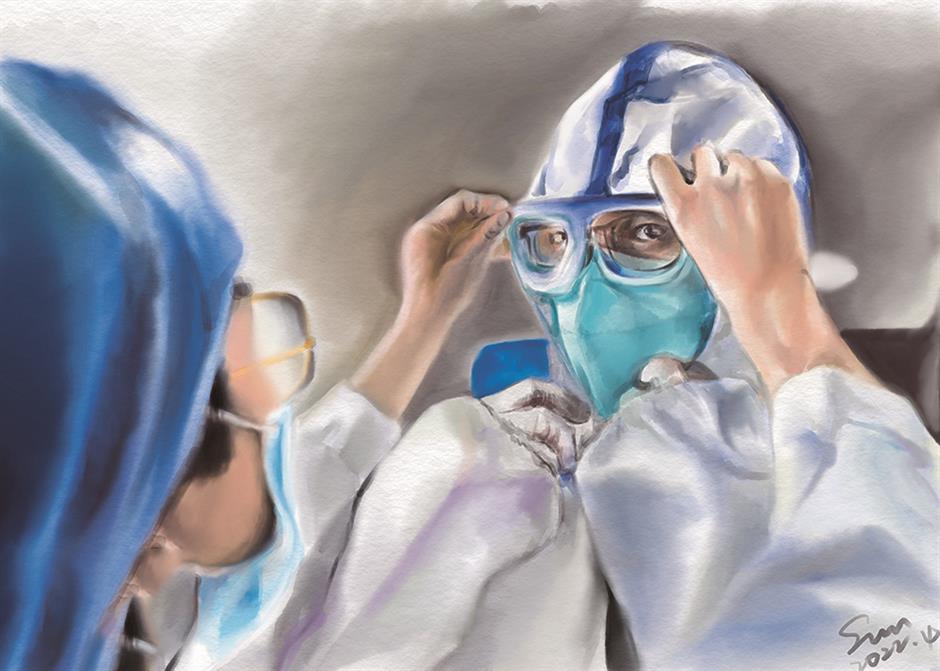 An artwork by Sun Jinye

Shanghai Jing'an Investment Group has held a special art exhibition to pay tribute to unsung heroes working on the frontline in the fight against the pandemic.

The state-owned company needed only 36 hours to set up a makeshift hospital and mobilize many workers to rush to the frontline. In recognition of their devotion and to give thanks, it has encouraged its staff and family members to record their heartwarming moments through their paint brushes.

In one work, a resident and volunteer, who refused to disclose their identity, depicted scenes of volunteerism in the Yuncheng neighborhood of Pengpu Town.

Let's have a look. 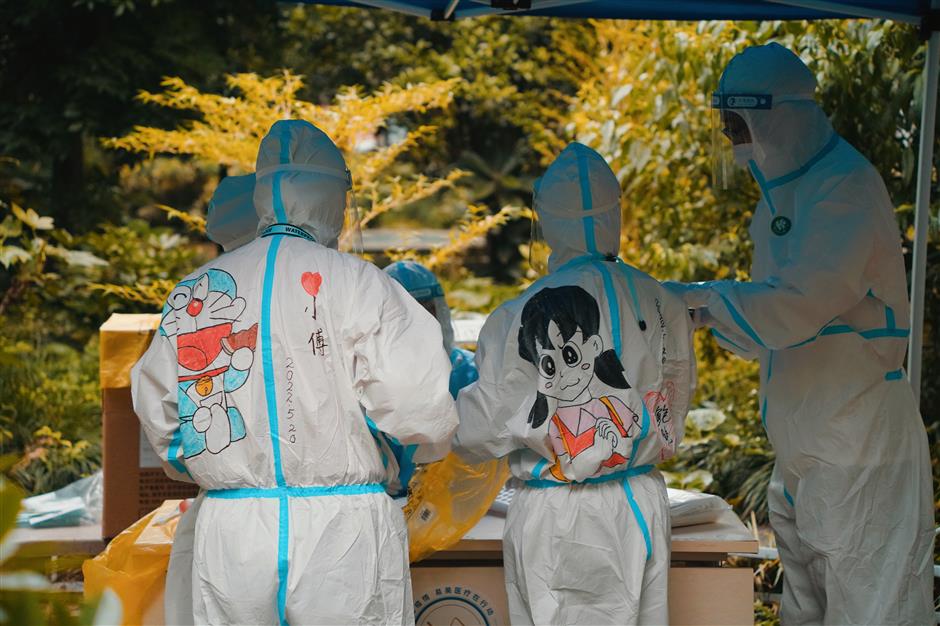 Cartoon figures are created on the back of the protective suits for volunteers at Xinfukangli neighborhood.

In the Xinfukangli neighborhood, dabai took on a new look with cartoon figures such as Doraemon painted on the back of their protective suits. The local neighborhood committee said it gathered a group of residents who were good at painting to color and draw on more than 10 protective suits in an attempt to calm the nerves of the weary volunteers. After the pandemic ends, it plans to give every volunteer a tailor-made protective suit as a memento. 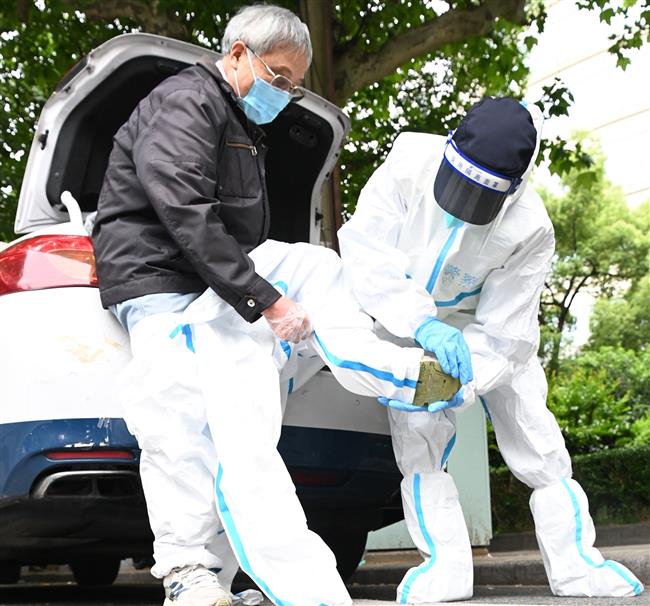 A senior man puts on a protective suit before getting into a police car to get home from hospital.

Police from Jing'ansi area have organized a special patrol team to drive senior residents back home after they finish doctor visits because the lockdown has drained available traffic resources.

An elderly woman surnamed Tian couldn't hail a cab after she accompanied her husband to see a doctor at Huashan Hospital, and she appealed for help to patrolling police. It didn't take them long to get into a police car.

"It's just beyond my words to express my gratitude," Tian said.

Police officer Zhang Min said the team usually drives senior residents back to their homes more than 10 times a day. 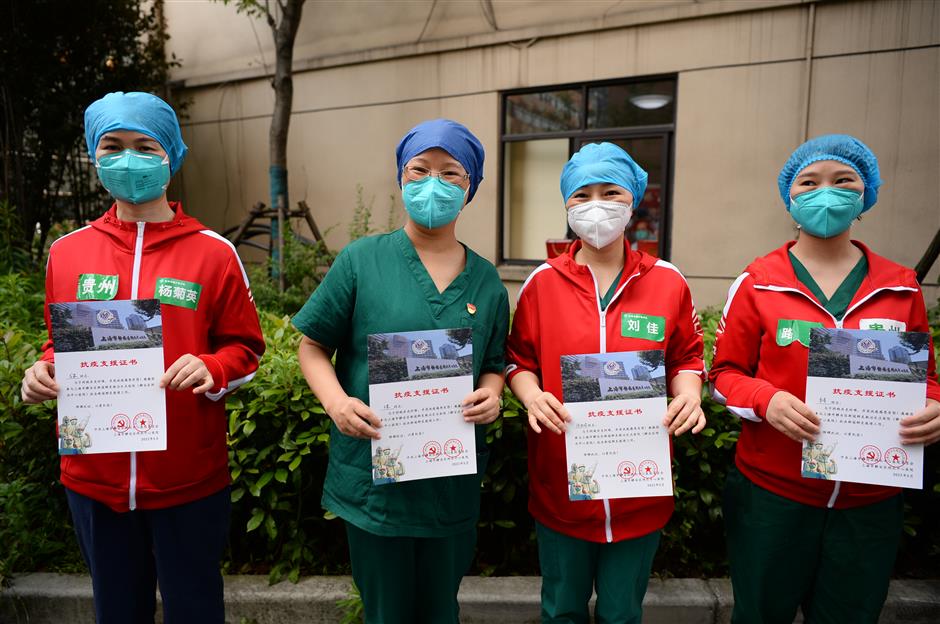 Medical workers from out of Shanghai receive award for their contribution to Jing'an's anti-virus campaign.

Hats off to medical assistance

Jing'an held a farewell meeting on May 22 for medical workers who came from around China to support the city's anti-virus fight. They included seven nursing teams from Shanxi and TCM treatment experts from Guizhou. 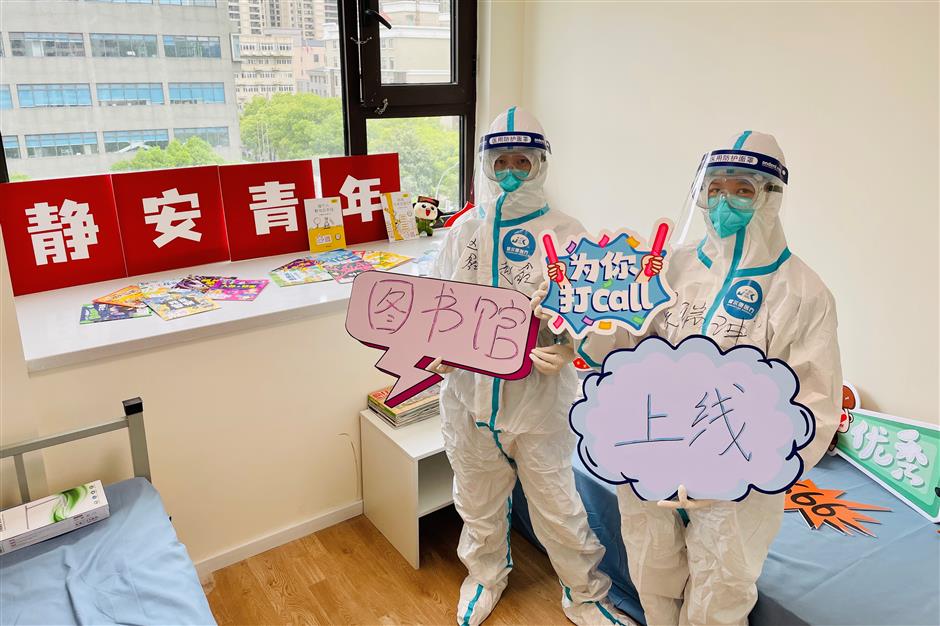 The library at the makeshift hospital on Jiangchang Road W.

A library was set up in a makeshift hospital on Jiangchang Road W. for patients to read books, full in their time and calm their nerves.

The initiative came from Wu Ruikun, a head nurse at Zhabei Central Hospital, who was among six medical workers sent by Jing'an to help Wuhan in its time of need in 2020.

In 2022, it was Wu's turn to support her hometown so she adapted her experience of caring for patients in Wuhan.

She proposed setting up the library, and organized yogurt for toddlers and hygiene amenities for women, among other supportive services.