Though the COVID-19 infections have waned in the city, many public venues remain closed. However, Jing'an has a varied landscape of places to visit and things to do. Follow Shanghai Daily to explore the beauty of the downtown district in a one-day walk. 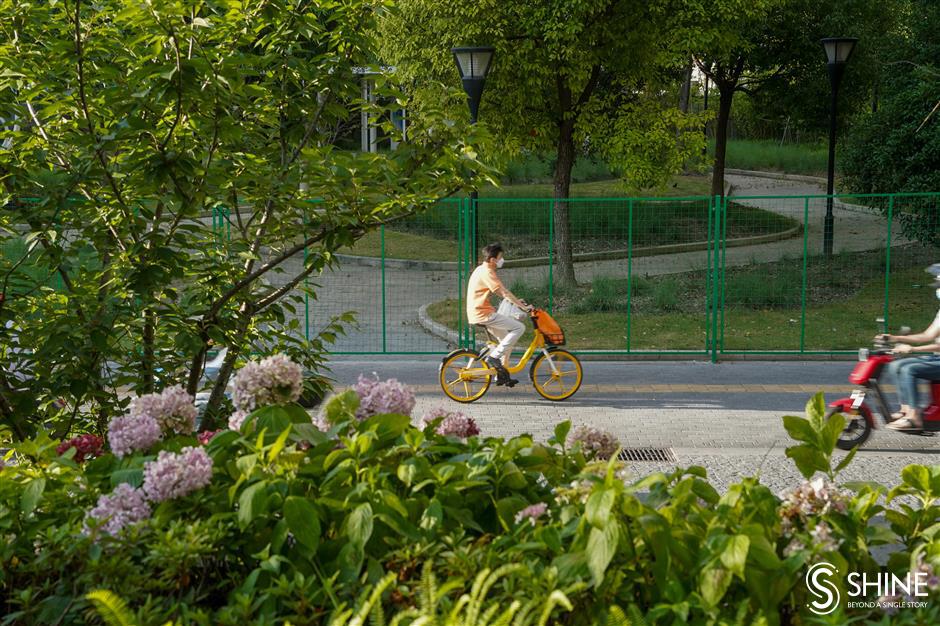 1) A morning ride along Suzhou Creek

Starting the day with a morning ride along Suzhou Creek is a great choice.

The creek is the biggest tributary of Huangpu River and runs through central areas of the city. With beautiful waterfront views and excellent recreational facilities, it is ideal as an alternative for a walk or a ride compared to the crowded Bund. 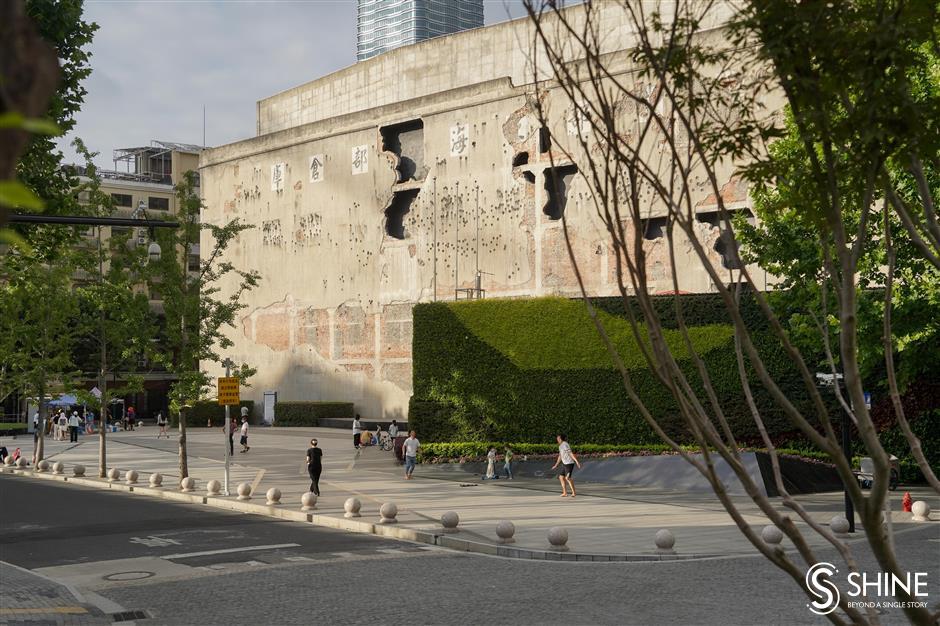 A 400-meter section facing the historic Sihang Warehouse to the north is highly recommended.

Its asphalt roads were replaced by cobblestones to add authentic Shanghai flavor because narrow cobblestone lanes were commonly seen in traditional shikumen (stone-gate) neighborhoods. Plants that flower throughout the year adorn the greenery, lined with camphor and ginkgo trees.

Also, traces of Jing'an history can be found on the waterfront.

Mosaic-style decorations, inlaid in the flood-control walls, were inspired by the facades of the fairytale-like Moller Villa built by Swedish shipping magnate Eric Moller.

Notably, the railings along the riverfront path have been designed based on the shape of the windows of the nearby Sihang Warehouse, known as the last stand for Chinese forces against Japanese invaders during the Battle of Shanghai in 1937.

What if you don't have a bike? Try a shared bike. It has become a trend in the city to ride shared bikes in the post-lockdown era as a means to avoid crowded public transportation. Of the shared bike operators, Meituan has equipped each bike with a bottle of hand sanitizer to ensure users' safety. 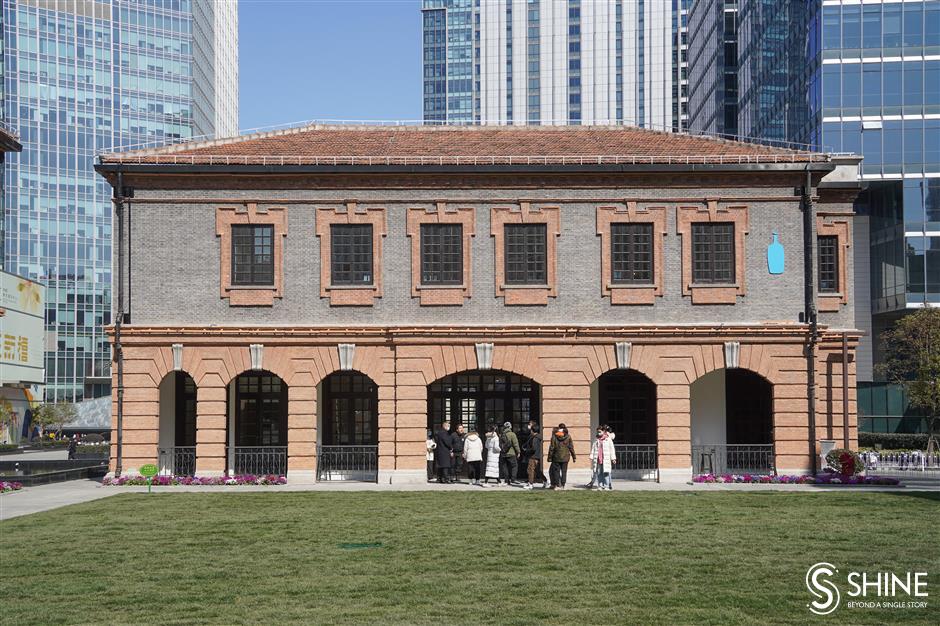 Feeling a little tired? Get refreshed with a cup of coffee from California-based Blue Bottle Coffee.

Its first store on the Chinese mainland is housed in a historic building near Suzhou Creek, with an address on 908 Chang'an Rd.

It offers the company's classic drip coffee and the same signature espresso-based drinks as sold in its other global locations. 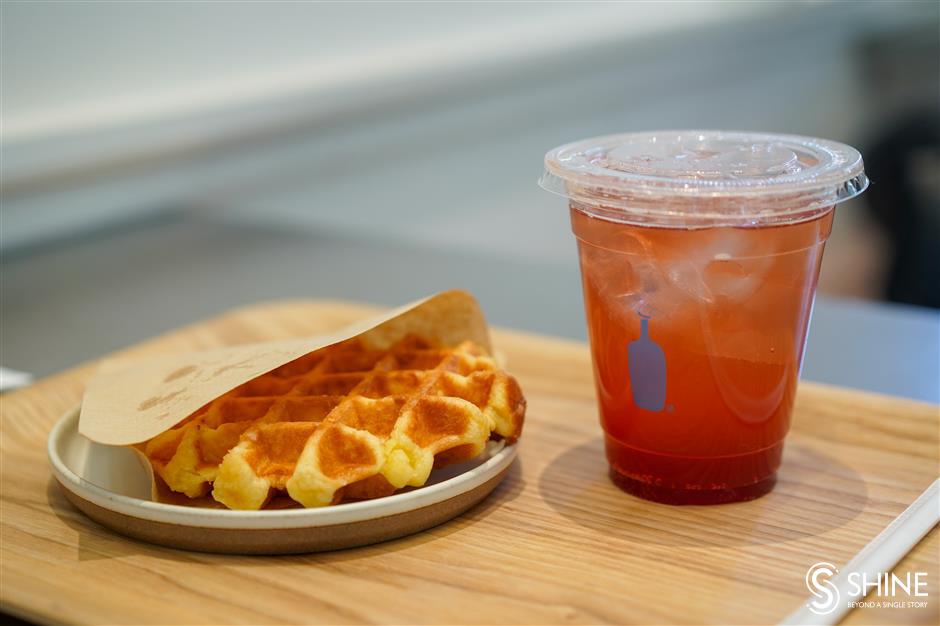 There is also a special food menu. Alongside its signature and popular products such as Liège waffles, chocolate chip cookies and lemon pound cake, it has also designed a "Yutong Dessert Set" that is exclusive to the new store. It includes traditional Shanghai desserts – sticky rice cake, green bean cake and fried dough twist.

As Shanghai hasn't yet lifted the ban on dine-in services, the store only provides takeout. So, a breakfast picnic on the grand lawn in front of the store, or somewhere on the Suzhou Creek waterfront, is a better choice. 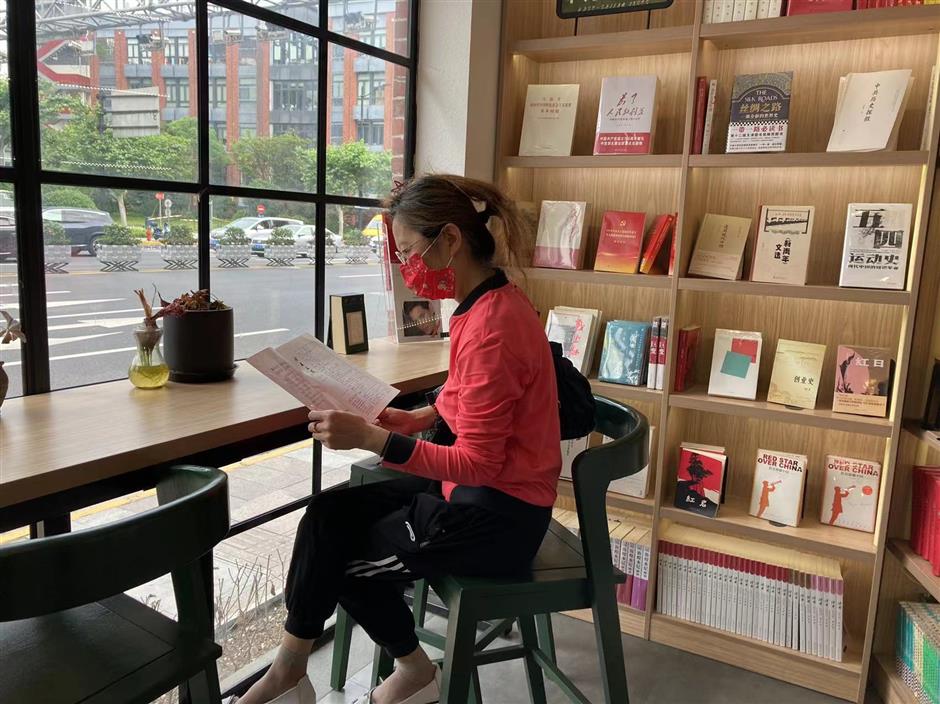 3) A place of quiet contemplation

Had enough outdoor time? Why not visit a bookstore to find some peace. One near the Sihang Warehouse is a good choice.

In fact, the venue on 79 Xizang Road N. is a community reading venue co-built by the local Beizhan Subdistrict and Duzhe (Reader) magazine, often hailed as the Chinese equivalent of The New Yorker. The store allows people to just read books and have coffee.

Currently, the books are disinfected after people finish reading.

Don't miss a highlight outside of the bookstore. On its façade facing Xizang Road N., there is a giant mural, a popular photo-taking site.

It features a girl reading the magazine under a blue sky, white clouds and bright sunshine, said to reflect the girl's inner world. It also features elements of Beizhan, where China's oldest railway station was erected, with cherry blossoms echoing a cherry tree standing right in front of the wall. 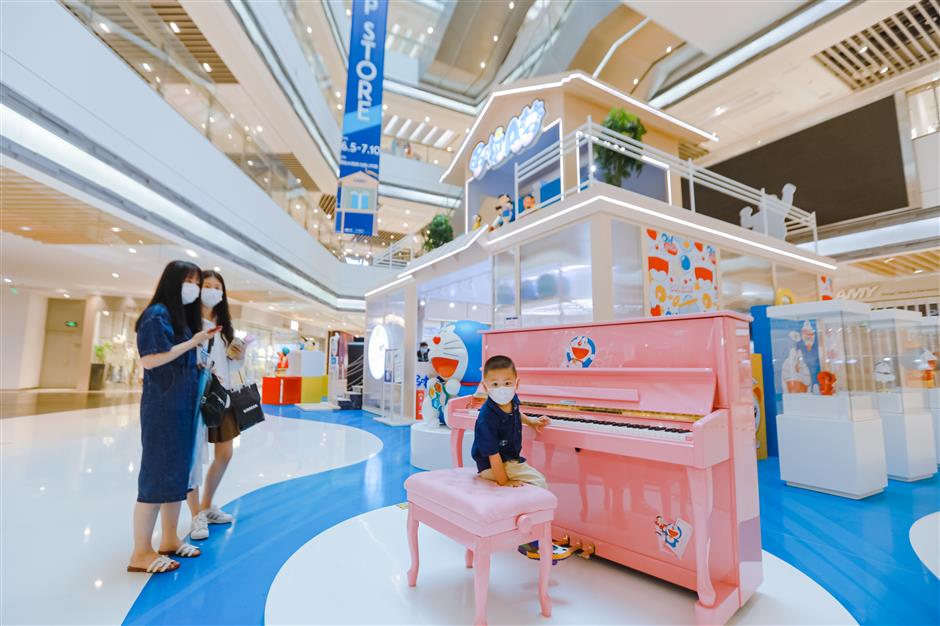 Just on the other side of the street, a Doraemon pop-up store has opened at the Joy City shopping mall, which is famous for its 56-meter-diameter "Sky Ring" Ferris wheel on the roof.

The pop-up, which will be open to July 10, is a real-life wonderland of Doraemon, a popular robot cat in a Japanese animation series. Scenes in the series are extant, allowing people to take photos with Doraemon and his friends Nobi, Shizuka Minamoto, Takeshi Goda and Suneo Honekawa.

Also, there's wall of Doraemon toys, including many limited editions such as one made of red crystal. And, there's a piano painted with pink colors and Doraemon figures for people to play freely.

After the visit, a wide selection of Doraemon products, including toys, cups and masks, can be perused on the shelves. 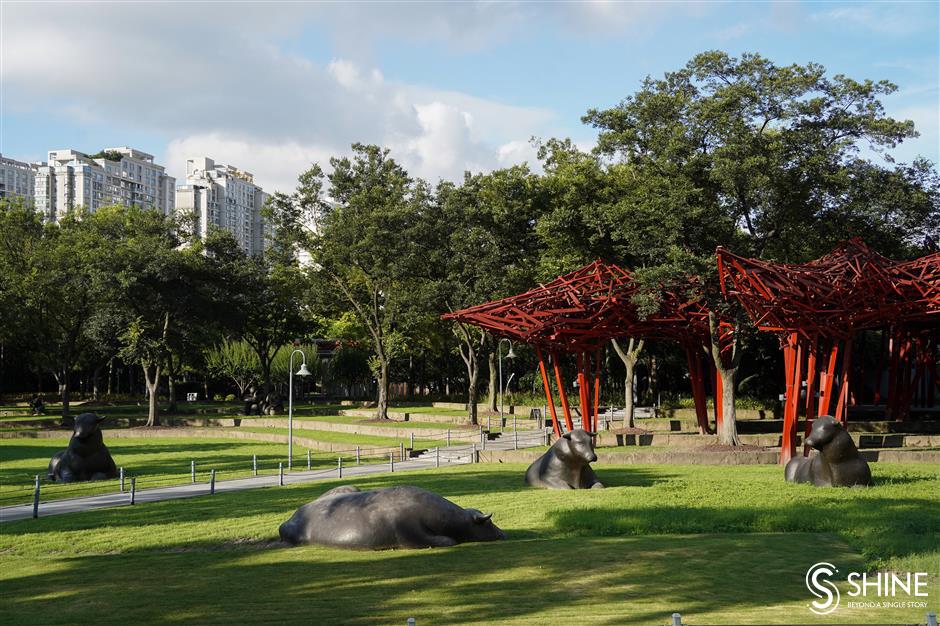 The afternoon starts with flower appreciation.

Special flower landscapes are now displayed in parks all over the district, including Jing'an Park, Jing'an Sculpture Park and Daning Park. In Jing'an Park, there is a sea of flowers, the hydrangeas in full bloom, and loquat trees bowed down with the weight of fruit.

Also, roadside flower decorations have been created for those who prefer to just knock around.

Colorful blossoms such as hydrangea and coleus have burst into a kaleidoscope of colors in roadside flowerbeds. For example, a total of 550 flower boxes situated in the middle of Changde Road, between Wuding Road and Yan'an Road M., have been renovated, their winterberry replaced by hydrangea and petunia to reflect the summer vibe. 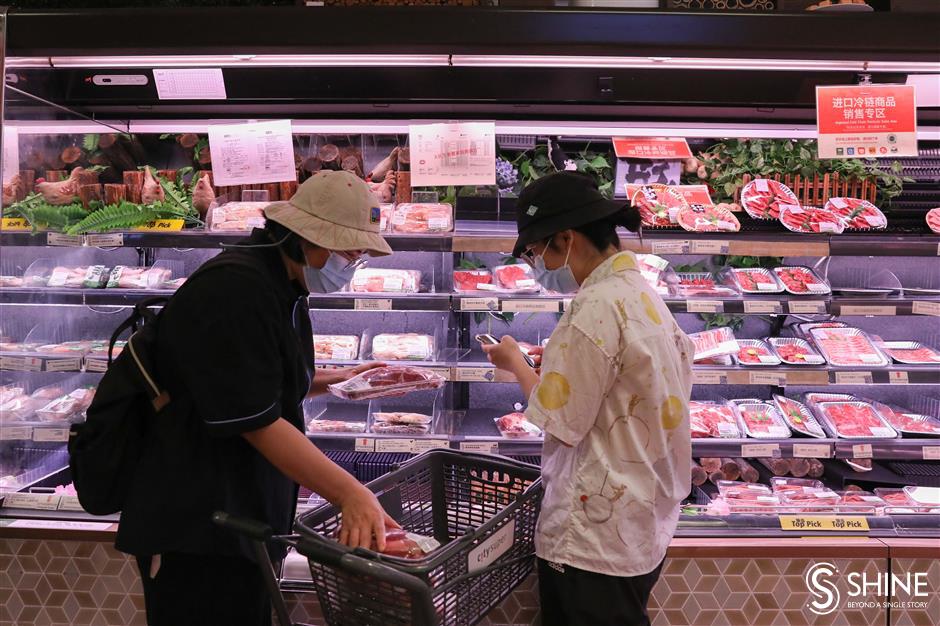 Sightseeing over. Time for some shopping.

Besides modern retailing experiences, you can also shop from a bygone era. As a backstreet of Nanjing Road W., Shaanxi Road N., is home to some of the local time-honored brands.

Make your way to heritage-listed Longfeng Qipao to order a tailor-made piece that characterizes the height of fashion in the 1930s. Humsuit next door is a fashionable brand dating back to the 1930s. It's an ideal place for men to find a quality suit.

Or step into the centuries-old Lei Yun Shang pharmacy to try traditional Chinese herbal tea. Notably, though the Dragon Boat Festival is over, it's still recommended to buy xiangnang, or fragrant sachet, a seasonal product for the festival.

The sachets are filled with fragrant herbs and medicinal powders and are worn or hung as household decorations, emitting an aroma that helps repel insects.

Sachets are one of Lei Yun Shang's signature products and there's a wide range of styles, such as lotus, calabash and zongzi, glutinous rice dumplings wrapped in bamboo or reeds. 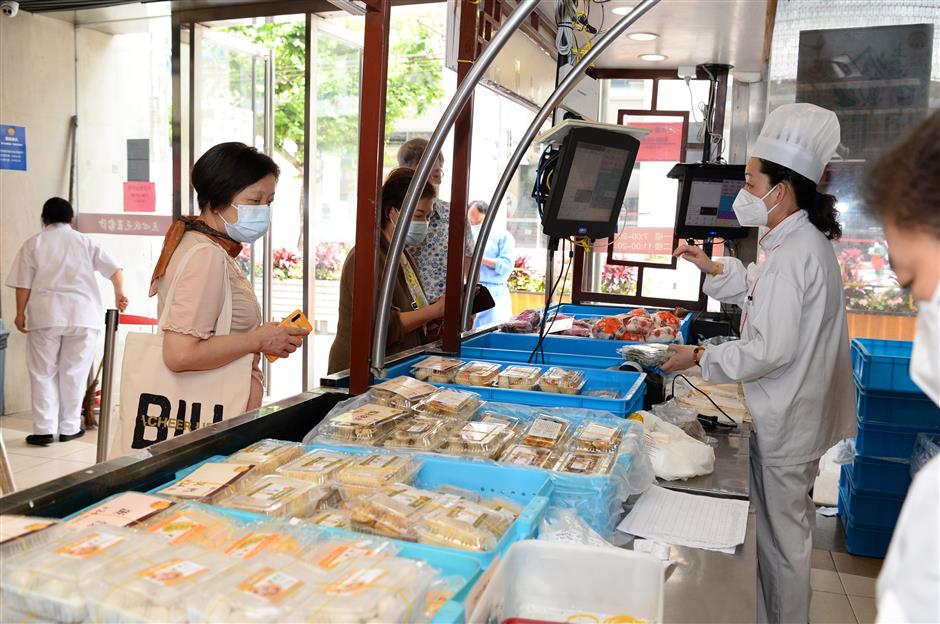 Stroll to the venerable Wangjiasha eatery on Nanjing Road W. to buy pre-cooked meals and snacks for dinner.

The 900 Food Court on Wanhangdu Road offers more. It features 23 well-known brands, such as Xiqu Laodafang, known for crispy meat mooncakes, and Lifeng, known for roast goose and sausage. 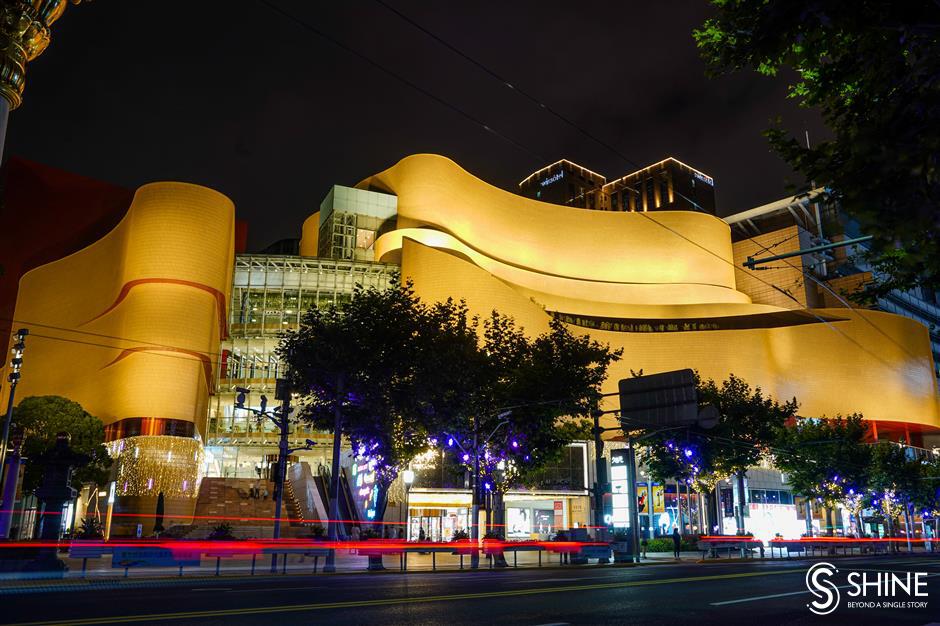 Time to go home, but don't miss the district's glittering night views on the way.

Iconic landmarks such as Jing'an Temple, Butterfly Park and Hengfeng Road Bridge have been lit up again as night falls.

If you are not in a hurry to get home, take a nucleic acid test.

So far, Jing'an has opened 363 nucleic acid testing sites across the district, enabling residents to take their tests within a 15-minute walk from their home or workplace. Some have expanded the test sites' service hours in consideration of people's diverse needs.