The first new ChaoJi high-speed charging unit in Shanghai opened to the public at the Auto Expo Park in Jiading District on June 30.

The maximum output of the charging device is 360 kilowatts.

It can charge new-energy vehicles for a range of 400 kilometers in just 12 minutes.

The ChaoJi charger adopts the new generation of high-power charging technical standards jointly launched by the State Grid and a number of enterprises.

"This technology is developed to meet the market demand for high-power charging of electric vehicles with improvements being made in safety, power, structural design and future applications," said Bo Ji, head of the Anting station of the State Grid Shanghai Jiading power supply company. 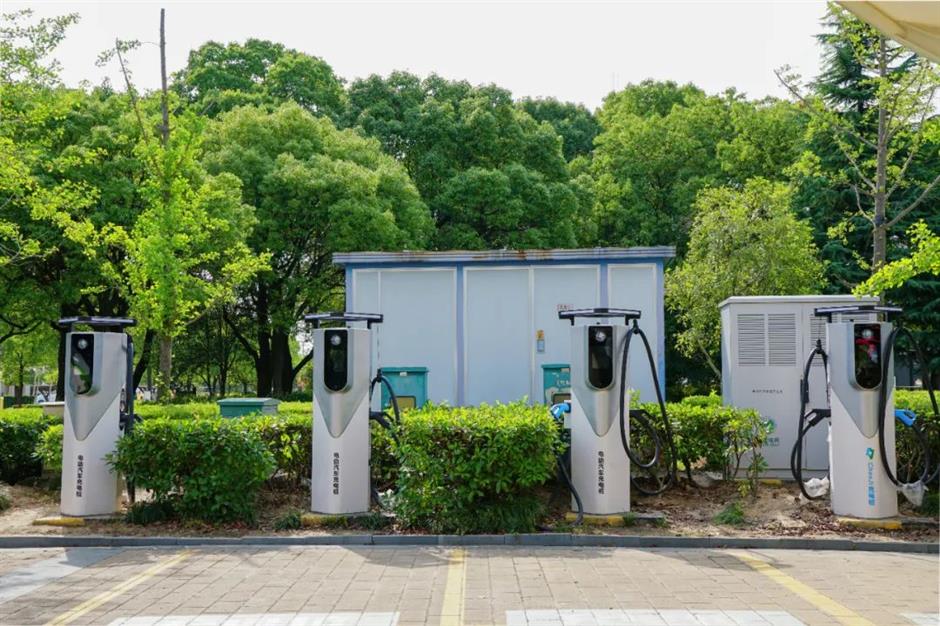 Standing with older versions, the new ChaoJi charging pile (far right) can recharge new-energy vehicles for a range of 400 kilometers in just 12 minutes.

While the future of ChaoJi charging technology is still full of uncertainties and needs to be further tested by the market and time, the majority of electric vehicle owners will be able to enjoy the convenience brought by this technology as the battery voltage level and the upper limit of charging current will be further increased due to technical improvements, thus leading to growing acceptance of ChaoJi charging standards by major car companies, according to Bo.

It assists in the operation of 775 State Grid charging piles in Jiading District and provides 12,000 kwh of electricity for vehicles every day.

As planned, the charging station where the new charging pile is installed will be built into the first five-star demonstration site in Shanghai with upgraded standards for products, construction, operation and maintenance, as well as services.

Zhu Lin, senior project manager of the new-energy business department of the Shanghai International Automotive City (Group) Co Ltd, said the company will work closely with the State Grid to carry out the pilot test of super-charging piles and then accelerate their mass productions.

﻿
Special Reports
﻿
61763
,
Sharing memories of those wonderful summers past
The taste of summer starts from the healing cafes in Jiading
It's scorching outside, but juicy fruits are worth the effort
The 'supermen' of the roads who keep the city ticking
Dine-in services resumed with emphasis on safety
Kunqu Opera kicks off charity season at Poly Grand Theater
New charging station showing the power to succeed
Pioneering Pudong leads the nation as a model of socialist innovation
Moments of Minhang District in July 2022
Work resumes smoothly on Xinzhuang subcenter
EXPLORE SHINE