Mapping out a grand vision for district's prosperous future

The theme of the conference was cross-regional integration for future development.

Qingpu is working with Wujiang City in Jiangsu Province and Jiashan closely to promote the high-quality integrated development of the demonstration zone, the district government said.

The district's topography looks like a butterfly spreading its wings.

In its east, part of the core area of the Hongqiao International Hub, an upgrade is underway.

As the permanent host of China International Import Expo, Qingpu has gathered a large number of high-level international trade platforms, such as the Hongqiao Overseas Trade Sub-center and the Asian Procurement Center of the United Nations, as well as 68 leading companies in a range of fields.

Recently, a series of policies aimed at promoting imports and attracting headquarters of trade and investment companies to the Hongqiao CBD were released.

In the central area of the district, Qingpu New City, a comprehensive node city, is being built. 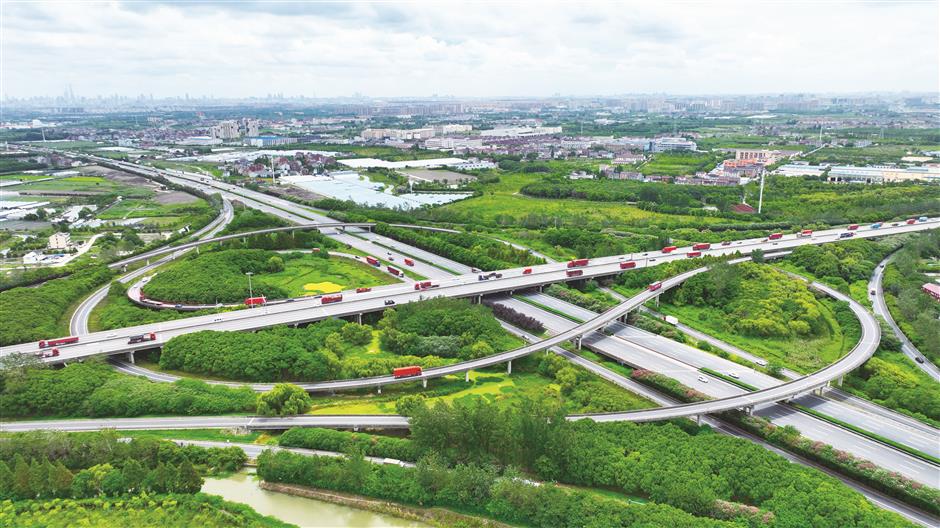 The ecological corridors in Qingpu District feature woodlands that serve as a barrier to effectively reduce pollution and noise from the traffic.

It is an ideal home for residents, with beautiful scenery and an innovation core.

In the west, a lake district is being created. To make it a world-class destination, a number of big projects such as the "watertown parlor" are underway.

Construction of the Xicen Science and Technology Innovation Park and the Jinze Innovation and Research Town is proceeding smoothly as well.

A digital belt of the Yangtze River Delta region is being established in the district. Huawei's new R&D base is under construction, and will be a world-class digital innovation base.

During the conference, a digital economy blueprint for the district was also released, focusing on national bases for smart logistics, BeiDou navigation and new-type industrialization including a number of industrial parks such as the Shanghai Shixi Software Information Park.

The scale of the district's digital economy will reach 500 billion yuan (US$74 billion) in the next three years.

Qingpu boasts 42 Fortune Global 500 companies and 32 listed firms. It is also home to headquarters of nine major express delivery companies, whose combined revenue accounts for one eighth of the nation's total.

Software information and green financing industries are developing rapidly in the district as well.

A life science park covering 10.6 square kilometers is being built, and the development of eight 10-billion-yuan trade platforms, involving areas such as new materials, high-end equipment and fashion consumption, is underway.

The district government said it has set a goal to create the most competitive business environment.

Under the target, 22 measures have been released to revitalize the economy, and industries such as advanced manufacturing are benefiting from preferential policies.

﻿
Special Reports
﻿
62743
,
'Fairy tale' festival lights up the summer nights
UNI Vanke Mall to offer a new shopping, lifestyle experience
Enjoy bucolic summer days in the great outdoors
Construction underway on intercity railway line
Mapping out a grand vision for district's prosperous future
Sharing memories of those wonderful summers past
The taste of summer starts from the healing cafes in Jiading
It's scorching outside, but juicy fruits are worth the effort
The 'supermen' of the roads who keep the city ticking
Dine-in services resumed with emphasis on safety
EXPLORE SHINE