Putuo District has been striving to create an "open government" through which citizens have rights to access information and participate in various decision-making processes.

The district in Shanghai's northwest area has ranked first among local districts in terms of open governance for seven consecutive years and is among the top county-level governments nationwide.

The district has also launched a livestreaming program to explain new policies and invite citizens to participate in public policy making online.

Transparency, accountability and participation are necessary conditions to ensure that public resources are used efficiently, public policies are designed in the best interest of the population and governments act with integrity.

In Putuo, many initiatives have been implemented to promote transparency, accountability and participation in government.

These government bodies are required to actively publicize their policy making, implementation, management and service processes, according to an official with the Putuo government.

Such open governance standards have been extended to villages and neighborhood committees across the district to increase public participation, he added. An open government promotional meeting for villages and communities was held in June with a standard catalog on what information must be publicized to citizens.

As a highlight, a specialized open governance service section was launched in 2020 in the lobby of the Putuo District Administrative Service Center at 602 Tongpu Road, allowing citizens to check various government information and services.

A livestreaming room was recently added to the section, inviting officials from government bodies to introduce and explain their new policies on a regular basis. Citizens can watch the program on site at the administrative center or via the district's portal website, Shanghai Putuo app or the Putuo column on the Suishenban app.

Residential communities along the Suzhou Creek in Putuo District

A "master's hotline" has also been unveiled. Senior service staff can explain policies and solve difficulties both on site and through online video conference.

For some professional and complicated new policies, the service center uses charts, pictures and illustrations along with video and audio equipment to explain issues to citizens. These pictures and videos are also available on the "policy explanation" column on the official website of the Putuo government.

Moreover, new policies will be disseminated to companies and individual businesses. Nearly 5,000 companies, for instance, have received timely reminders from the service center to register their annual business information and avoid running afoul of the law. Customized web pages have been created for companies that include the most relevant government policies for them.

During the COVID-19 lockdown in May, Putuo's supportive policies for small- and micro-sized enterprises and individual businesses were delivered to over 50 companies that reaped rental reductions totaling 13.54 million yuan (US$2 million).

Putuo was the first among local district governments to initiate the "government open day" event in 2018. On these open days, citizens from all walks of life are invited to enter government buildings at 1668 Daduhe Road to see how the government operates and give suggestions. Over 1,200 citizens have taken part in a total of 44 such open events, which have become a major communication bridge between citizens and the district government.

The event has been extended to "government open month" and promoted online, during which about 30 government bodies and 10 subdistricts and towns conduct tours, maneuvers or exchanges with citizens.

In late July, Xiao Wengao, director of Putuo, hosted the first-ever livestreamed standing committee conference of the district government. The meeting, which was normally closed-door in the past, covered economic development in the first half of the year and government work plans through the end of the year.

Three public representatives, a scholar, a company official and a citizen, attended the meeting, which attracted tens of thousands of viewers and messages.

"Such open governance events will become regular in the future in publicizing decision making, implementation, management, service and investigation results," said Xiao. "Government bodies must follow up and answer citizens' concerns to address any new situation and problem after the implementation of new policies."

Over a million online viewers tuned into the urban management authority of Putuo on WeChat last month, which livestreamed the patrol and law enforcement process of its officials.

Citizens can even follow law enforcement officers while conducting inspection and crackdown missions.

Putuo's open governance efforts have paid off during Shanghai's COVID-19 resurgence. The district became the first downtown district to achieve zero community transmissions in late May.

At the outset of the resurgence, the district government launched a COVID-19 prevention and control column on its official website that includes news, policy explanations and a Q&A section about the resurgence.

Thanks to the open information, Putuo became the first local district to minimize the lockdown scale to a single residential building. It publicizes online shopping channels for urgently needed medications and daily necessities. During the peak of the pandemic, it hosted online mental health lectures on its official app.

The fight against the COVID-19 has received great support from Putuo citizens via open governance platforms, according to the district government. Many online rumors were debunked through the app and WeChat account.

After the city emerged from the lockdown, Putuo immediately livestreamed its policies and measures to support work resumption.

As a next step, Putuo will further its open governance measures.

More events will be initiated, such as the recent "Online Service Season," which aims to promote its fully functional e-governance services. It has launched five key cloud services, available on mobile phones, covering COVID-19 prevention and control and various administrative services as well as work resumption and people's livelihoods.

With smart technologies such as big data and artificial intelligence, government information and policies will be arranged into customized news packs and sent to companies and individuals.

How the 'open governance' concept is implemented

After a yearlong renovation of the Caoyang No. 1 Community, hundreds of households, mainly descendants of model workers, have returned to their refurbished homes.

The major renovation, the largest since the community was built in the 1950s to answer the call of then Shanghai Mayor Chen Yi to "serve the working class," has restored the original look of the neighborhood while reinforcing building structures.

Brick-and-wood structures have been retrofitted with steel and concrete, while interior layouts have been redeveloped for each household with an additional 8 square meters of space as well as private toilets and kitchens.

Designers spent two weeks talking to residents, many of them senior citizens. The talks highlighted major problems, such as a shortage of exercise space, benches and parking spaces.

In response, dozens of modern street lamps have been installed across the community. The lamps illuminate the streets and integrate signals from surveillance cameras, public radio, WiFi and 5G. 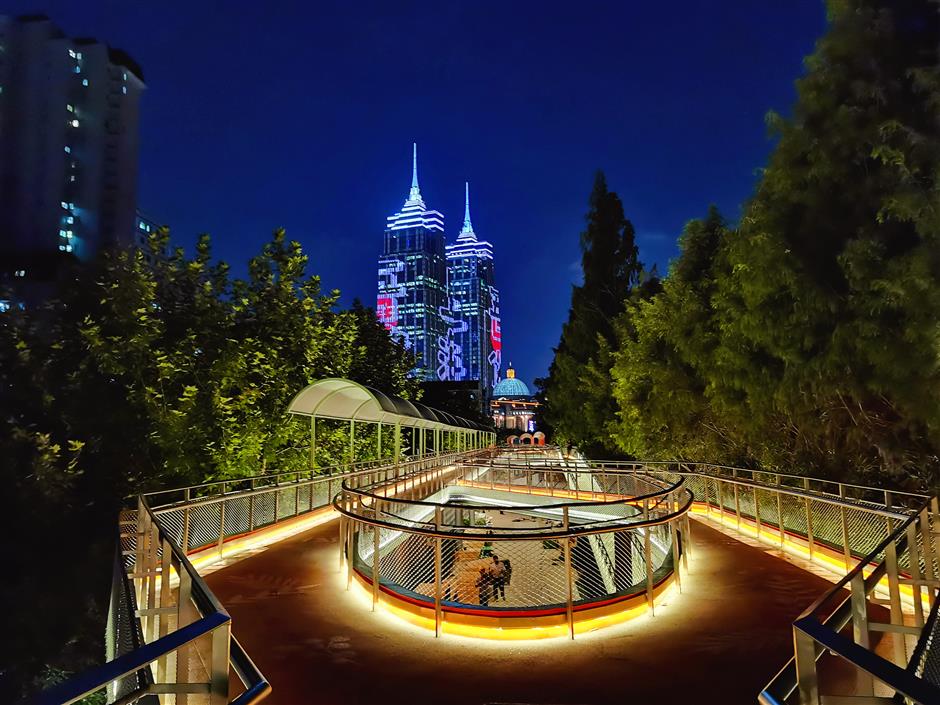 A park created from what was once Shanghai's longest railway wet market has become a key attraction in Putuo, and local citizens have been involved in the design and construction of the park.

The highline park stretches for a kilometer through the Caoyang community between Caoyang Road and Zhongshan Road N. It was once Caoyang Railway Wet Market, a narrow, long market with poor environment and noise problems.

The market was shut down in 2019 after complaints from residents.

The park's arched canopy resembles the shape and color of the former market's ceiling.

A basketball court and service station have been built in the underground space to make up for the shortage of activity space in the old neighborhood.

Wanli Subdistrict reported the lowest COVID-19 infection rate during the peak of the city's resurgence, as its 15 communities made the publication of timely information a key measure.

In May, an information publication standard was issued to each neighborhood committee to keep them up to date on COVID-19 prevention information.

A media specialist was appointed to each committee to serve as a communication liaison between the subdistrict and its communities.

The subdistrict also released a guideline for a "zero-COVID-19 community," with 30 detailed standards on prevention and control measures, volunteer recruitment and nucleic acid screening. The standard was later updated after soliciting opinions from the public.

Posters, cards and information bars about the pandemic were created and widely distributed along with online information in WeChat groups.