Celebrating past and future of Zhuanqiao 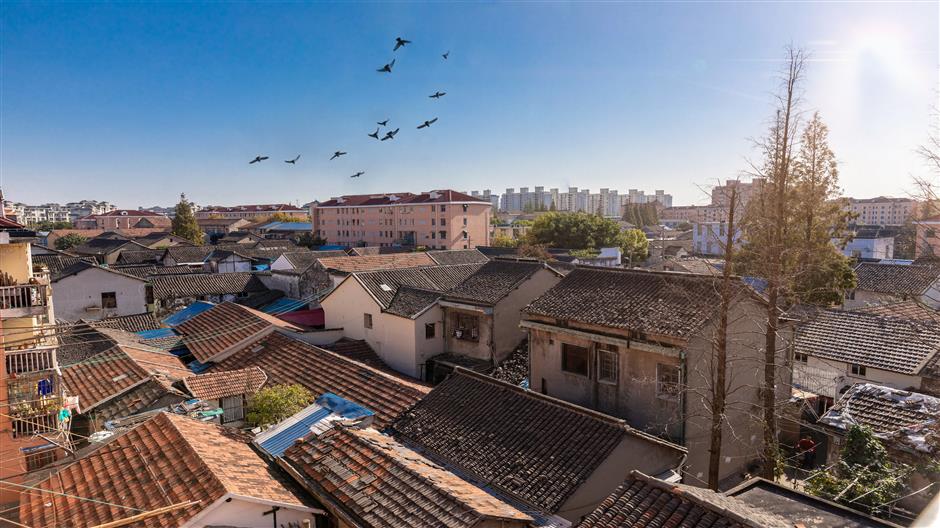 In early autumn 1922, Fu-Min-Nan-Cho Road, the prototype of Humin Road, was about to open to traffic. It passed through the Minhang old town, connected with Zhuanqiao Town, then turned east till it reached downtown Shanghai.

As a bus stop was set up in the east of Zhuanqiao – the town's traffic condition would therefore be greatly improved.

The local business circle was excited about this infrastructure progress. It foretold a good chance for the town's development.

"The rice harvest season is drawing a curtain," businessmen said. "If the town seizes the chance to hold some festival, farmers who now have some free time will come here to have fun, so will people from downtown Shanghai, since the road has connected the urban with the rural."

The businessmen then came up with the idea of holding the Zhuanqiao Double Ninth Festival Temple Fair on October 28 that year.

Stores prepared goods and widely promoted the event. The local merchants invited out-of-town vendors and folk troupes, including acrobatic actors from Shandong and Hubei provinces, to liven things up. The fair lasted for three days and made both itself and the town a highlight along Humin Road even before the opening ceremony of the road was unveiled on January 1, 1923.

An illustration featuring the bustling businesses of the Zhuanqiao old streets is on display at Zhuanqiao's service center to show history of the town.

Some relics of the ancient north-south ridge, formed by dead seashells and sand, and proof of Shanghai as a coast before it expanded onto land, were unearthed in Zhuanqiao.

The place was also, according to a legend, where Lu Ji (AD 261-303), renowned man of letters in the Western Jin Dynasty (AD 265-317), sent his crane up to sky and was impressed by its hooting sound.

The Old Liuleitang River that crossed Zhuanqiao from the east to the west nurtured the place.

The town had a south and a north street. The North Street, about 100 meters in length, had a Zhang family and a Zhou family. The Zhang family expanded well and boasted some offspring with fruitful social achievements. Zhang Yi (1899-1975), a man of insight from the Zhang family, was a great contributor to the town's primary school education and mass education courses. The Zhou family who lived in the North Street had a family member who used to be the richest man in Zhuanqiao. 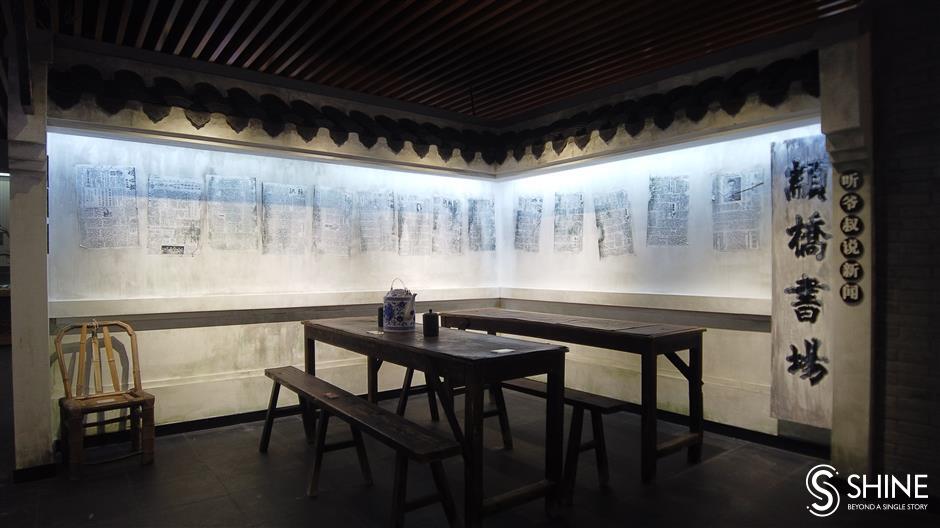 A replica of a Shuchang teahouse

A teahouse run by Cao Tugen, a man with a stout figure, was the most popular. Water boiled above the stoves and hundreds of teapots were placed in an orderly manner at a front room. People sipped tea while listening to folk artists telling stories like "Heroes of the Marshes."

In the late 1950s, five city or county-level factories, involving textile, papermaking, tractor, electric appliance and grease, were set up in the town.

Other factories founded by the People's Commune on Guanghua Road in the town include a rice mill, a sulfuric acid factory, a winery and a coal briquette plant.

A flourishing town with a self-sufficient lifestyle was created.

"I was born in a nearby village," said Xu Fangqi, former head of Zhuanqiao Middle School. "My grandpa adored me. When I was upset, he would coax me and say, 'Let's have fun up in Zhuanqiao.' Then I was like wreathed in smiles.

"The folks said 'up in Zhuanqiao' to express an admiration and longing."

Wu Yiren, a Zhuanqiao native and seal-cutting artist, added: "There was a town river before it was filled up and turned into the Zhuanjian Road. I used to swim in it, watching my mother doing the laundry at riverside and boats coming and going. Along the banks there were restaurants and households. That was the sweet childhood memory."

As urbanization progressed, Zhuanqiao old streets, while faced with stresses on environment, flood and social security, were put on the agenda of urban renewal. In September 2018, the Zhuangqiao old streets urban renewal project, Minhang's largest in terms of volume, was initiated.

In 2019 the streets carrying the memory of the residents disappeared amid the roaring of bulldozers. Four historic relics were preserved.

Not far away from the leveled-down Zhuanqiao old streets is the town's service center on Guanghua Road. There, archives and items donated by residents are displayed to show history of the town and its old streets. On one of its walls are doorplates dismantled from houses of residents.

A replica of a local family house's sitting room 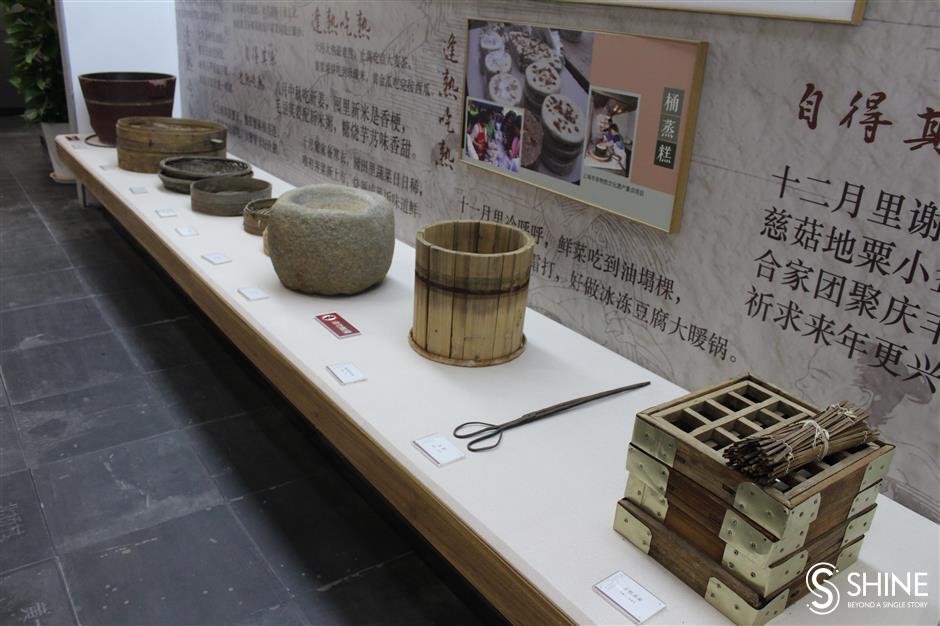 "When I saw all of these, I found where my roots were and they are a proof that the streets did exist before," said one former resident. The Guanghua Road on the north border of the renewed area is now an innovation block.

Like Hoxton in London, the block now houses more than 200 cultural and innovation companies in sectors of media, architecture and industrial design, consulting and fashion. Whereas in the past it was a 500,000-square-meter block of desolate factories, storages and stores.

The cultural aspect of the town has been well preserved. Its paper-cutting, waist drum dancing and parasol twirling are listed as Shanghai's city-level intangible culture heritages. Zhuanqiao was awarded "Town of the Chinese Folk Art" by the Ministry of Culture of China from 2011 to 2013.

History is supposed to be gone. But occasionally you may find it disguised in different costumes.

As for Zhuanqiao, may you find its past in the bustling cake fair and the flourishing Guanghua Road – a foretelling that the town's development surely comes.

A bird's-eye view of the modern Zhuanqiao Town

﻿
Special Reports
﻿
61766
,
Celebrating past and future of Zhuanqiao
Downtown transplant promotes smart, carbon-neutral farming in Chongming
From coffee to art to mooncake in the district
Community service staff key to building bridges with authorities
Caojiadu Subdistrict a local version of city's 15-minute life circle
A magnet for foreign investment and talent
Head to Qingpu to enjoy crape myrtle in bloom
Cool off at Qingpu's water park and 'ice town'
Beat the heat at cool outdoors of Qingxi Country Park
B&Bs on the rise in eco-rich Qingpu District
EXPLORE SHINE