A Shanghai-based high-tech company in Minhang District is fighting its way into the chip design industry dominated by foreign IT giants.

It made its debut at the 2022 International IC & Component Exhibition and Conference, won the title of "Innovative IP Company" at the China IC Design Awards and released its first PCI Express 4.0 PHY, a high-speed, highly efficient and cost-effective transceiver to turbocharge today's high performance and high bandwidth applications.

"If we look at a chip like a Lego brick, what we do is to design modules of bricks that can be copied and fit into different toys," said Tang Rui, M SQUARE vice president.

"A well pre-designed module with a standalone function can be applied to many complicated chips, which helps reduce workloads, shortens design time cycles and maximizes the odds of success." 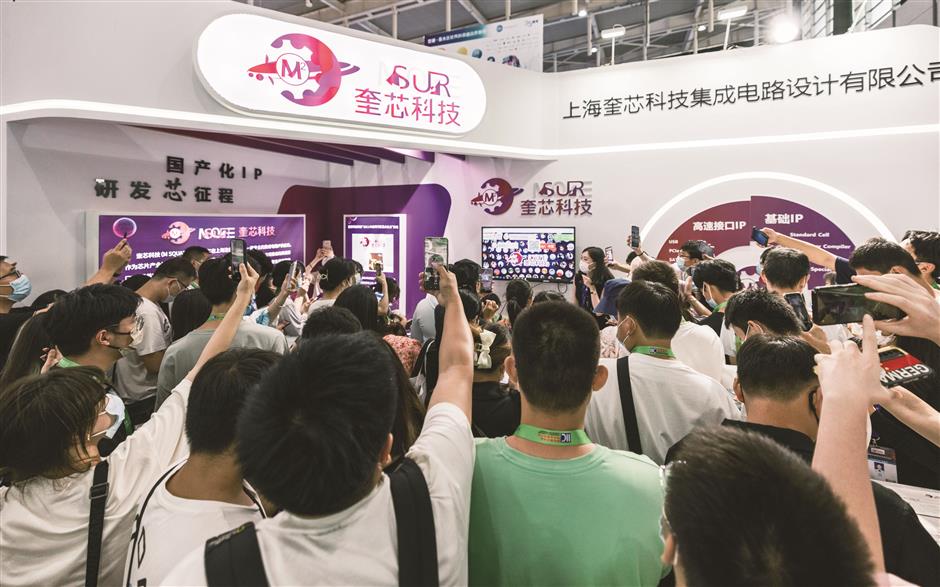 Visitors are attracted to M SQUARE when it made its debut at the 2022 International IC & Component Exhibition and Conference.

In recent years, chip design enterprises in China have been mushrooming, but the very top of the pyramid that owns intellectual property is a place where few Chinese faces are seen.

M SQUARE is undoubtedly an upstream designer in the chip industry that stands out from its domestic competitors with its PCI Express 4.0 PHY, a milestone for China's chip design with its own IP.

"The product currently has a market scale worth US$60 million in China, and it's estimated to reach US$364 million in the near future," Tang said.

M SQUARE has seven new products with IP in research and development, and five will be launched next year.

One year ago, M SQUARE settled down in Minhang's Maqiao Artificial Intelligence Zone because of the district's rich high-tech innovation resources and preferential policies.

"There are many robot and semiconductor companies here that might become our clients in the future," Tang said.

During the citywide lockdown in April and May, M SQUARE pushed on. The company's R&D team continued working from home. It hired more than 20 new employees and received additional financing.

"The impact of the pandemic on the global supply chain is huge, but it has also promoted digital transformation in various fields, and the demand for domesticization is even more urgent," said Wang Xiaoyang, another company vice president.

"But this is also an opportunity for M SQUARE. China's chip IP design field is still a blue-ocean market, and we hope we can be one of the pioneers to make our contribution to the chip and semiconductor industry."

﻿
Special Reports
﻿
61766
,
Minhang-based tech firm looks to make its mark
Moments of Minhang District in September 2022
Anle Village gets its groove back after overcoming pandemic
Celebrating past and future of Zhuanqiao
Downtown transplant promotes smart, carbon-neutral farming in Chongming
From coffee to art to mooncake in the district
Community service staff key to building bridges with authorities
Caojiadu Subdistrict a local version of city's 15-minute life circle
A magnet for foreign investment and talent
Head to Qingpu to enjoy crape myrtle in bloom
EXPLORE SHINE