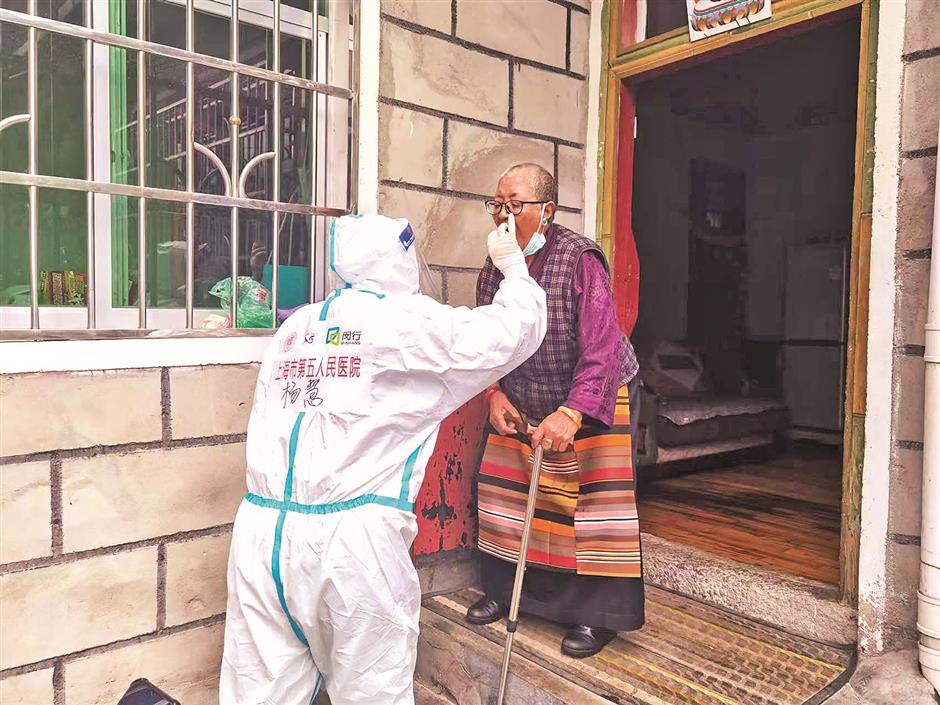 A medic from Minhang gives a PCR test for a villager in Xigaze.

Jiang Zhouhua had no apparent reactions to high altitudes, so she volunteered to go up the mountains to work. The road was rugged, and she finally reached the village, which was 4,100 meters above sea level.

It is close to the Chinese border and on the opposite mountain is Bhutan. The residents had lined up in an orderly manner, and the testing was quickly completed.

"Although it was stuffy to go around testing, the green scenery helped," Jiang said.

Most of the villages visited by Yang Hui were occupied by elderly people, with an average age of more than 80 years old. They could not go down the mountain to take the test.

"When we entered the homes of the Tibetans, they were very warm to us. After testing, they would say 'thank you' with typical Tibetan etiquette," Yang said. "Although I can't understand Tibetan, I could see the sincere gratitude and hope in their eyes."

Psychological counselor Jiang Rong was impressed by a little boy about 2 years old who was unwilling to take the testing and hid in his grandfather's arms at the sight of strangers.

Jiang comforted the little boy, and asked his father to bring out the child's favorite things. She quickly established a mutual trust with the kid and completed the testing.

She drew a picture and wrote a note in Tibetan saying, "You are the best." She took it to the child's house the next day.

"Painting is a good way to communicate with children," Jiang said.