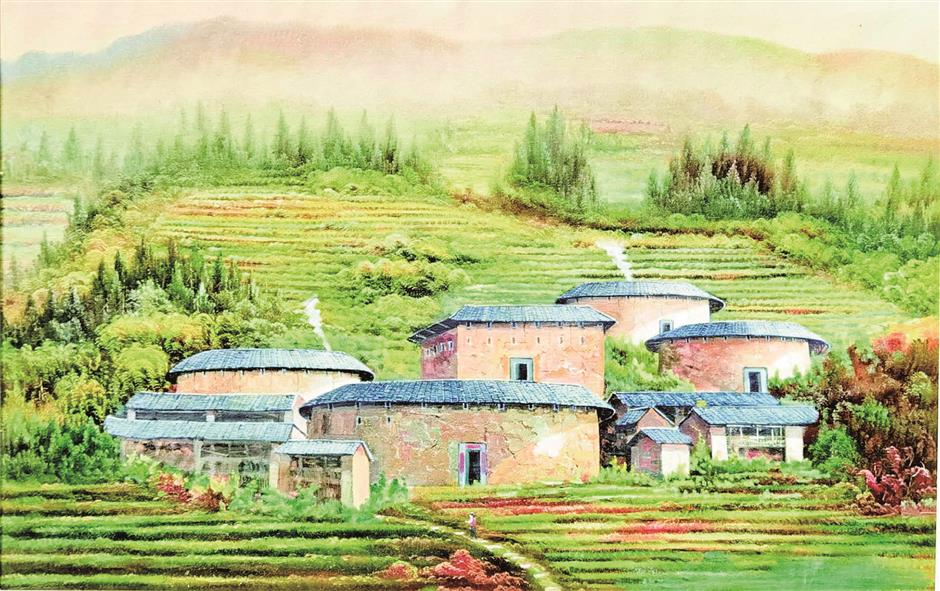 "The Lingering Charm of Tulou House" by Zhang Shangming

Zhang Shangming believes there are no boundaries in art. For the past two decades, the oil painter, 55, has been exploring ways to integrate traditional Chinese and Western aesthetics into the art of painting.

"Western paintings are very particular about the pursuit of logic and reality, while Chinese paintings emphasize freehand, spirit and background," Zhang said. "I'm thinking about whether there is a way to merge them together."

What will happen when the two arts collide? Zhang calls his painting "New Imagism," a new art creation that focuses on precision, objectivity from the West and Eastern philosophical expression to trigger boundless associations between human and nature.

"It uses Chinese elements but is presented by oil. The way I paint follows the Western pattern of art manifestation and at the same time conveys the traditional Chinese mindset," he said.

One of his signature works is the painting "Song to the Sky," which portrays an old farmer in northern China playing a suona (a traditional Chinese musical instrument with a double-reed horn) while his granddaughter looking up at him attentively. 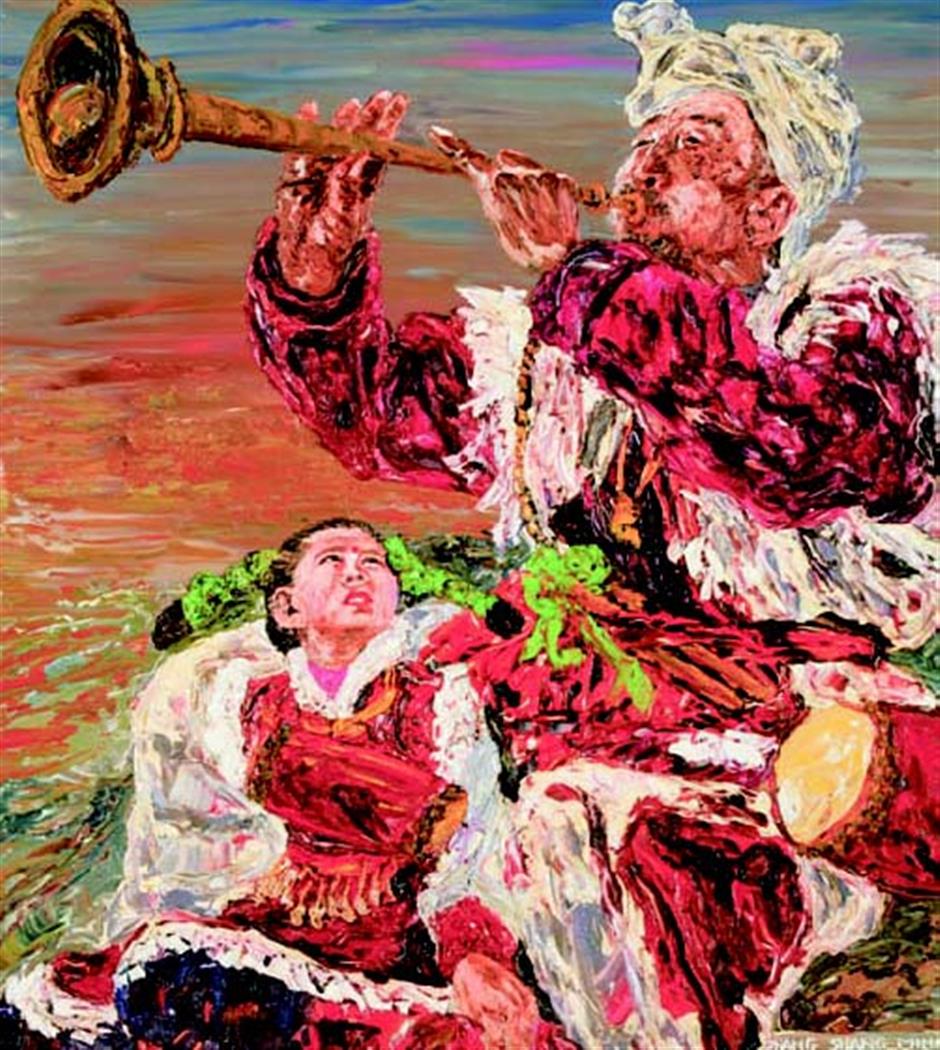 "Song to the Sky" by Zhang Shangming

It's no doubt an oil painting with bold, bright colors in good light and shadow arrangements. But the loose strokes and big blocks of colors in the background let viewers' imaginations run wild.

"You may think they are sitting by the harsh Yellow River or on the vast stretches of barren land in the freezing cold of northern China," Zhang said.

The painter bumped into the old man and the girl more than 10 years ago in northwest China's Shaanxi Province and was deeply touched by the scene. He spent three months on the painting after he returned home, which won the Gold Award at the Milan Expo 2015.

The work "Bronze Memory from the Qin Dynasty" takes people back more than 2,000 years when China was united as a country. The painting portrays the world-renowned bronze chariots and horses of terracotta warriors in Xi'an, capital of Shaanxi, which were buried underground for hundreds of years and came back to light in 1988. 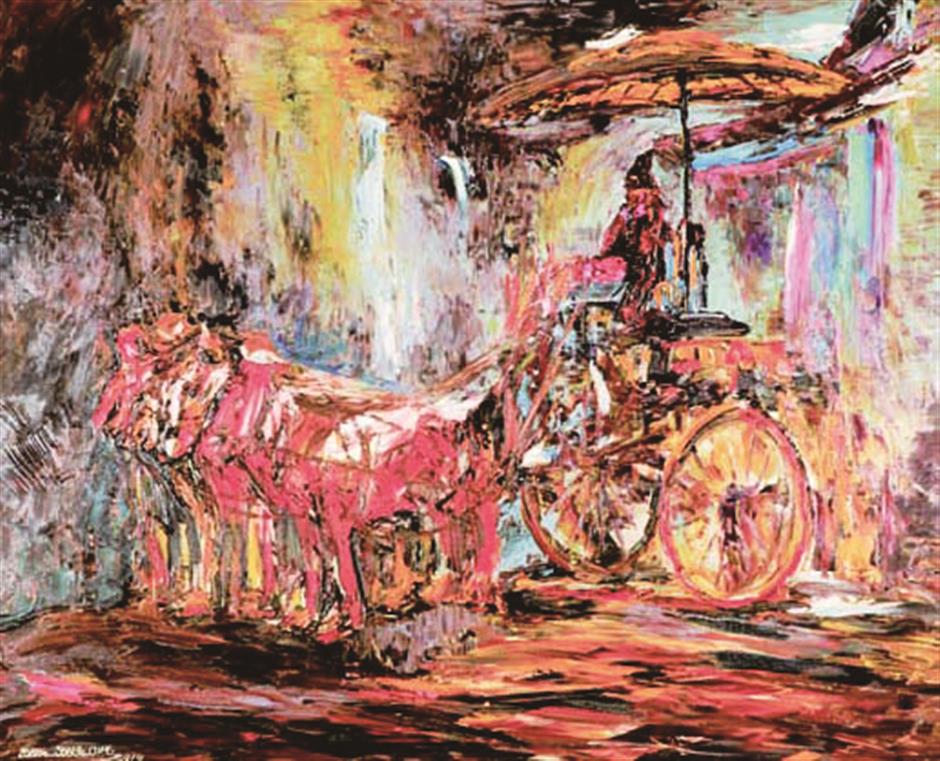 "Bronze Memory from the Qin Dynasty" by Zhang Shangming

Zhang painted them in a dreamy way by using various colors and loose, freehand strokes to create an illusion-like scene that blurred the boundaries of reality and fantasy.

In the painting, the driver appears vague, sitting below a large umbrella with his hands holding the horses' rein. The chariot and the horses seem to be standing on a center stage under the spotlight as they are painted with myriad red and yellow hues, creating a dramatic stage-light effect.

Different from many other artistic approaches that often treat the bronze chariot with a kind of solemnity, Zhang made it psychedelic.

"Traditional Chinese painting focuses on creating an ambience with lines and strokes to express a kind of spiritual pursuit," Zhang said.

"This artistic concept is the soul of Chinese culture, and what I've been doing is putting this soul into a Western body." 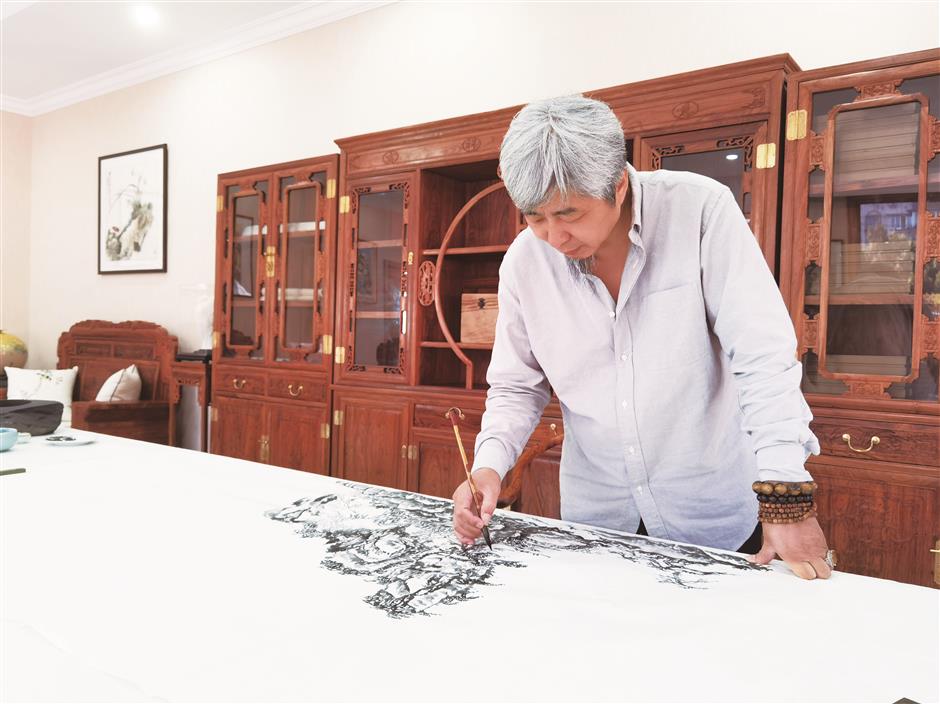