Dynamic changes and renovations all around the district

Jing'an sits in the heart of Shanghai. It represents the essence of the history and culture of the city, home to century-old buildings, big-name attractions, glitzy retail malls and charming art galleries. Annual music and art events give the district a distinctive ambience. In this series, we showcase the highlights of Jing'an.

Adhering to the "People First" tenet, the city has been striving to build a "People's City" that lives up to people's expectations while going for innovative development. A case in point is Jiang'an District. Let's follow Shanghai Daily reporter Wan Lixin to check out how Jing'an defines a people-oriented place. 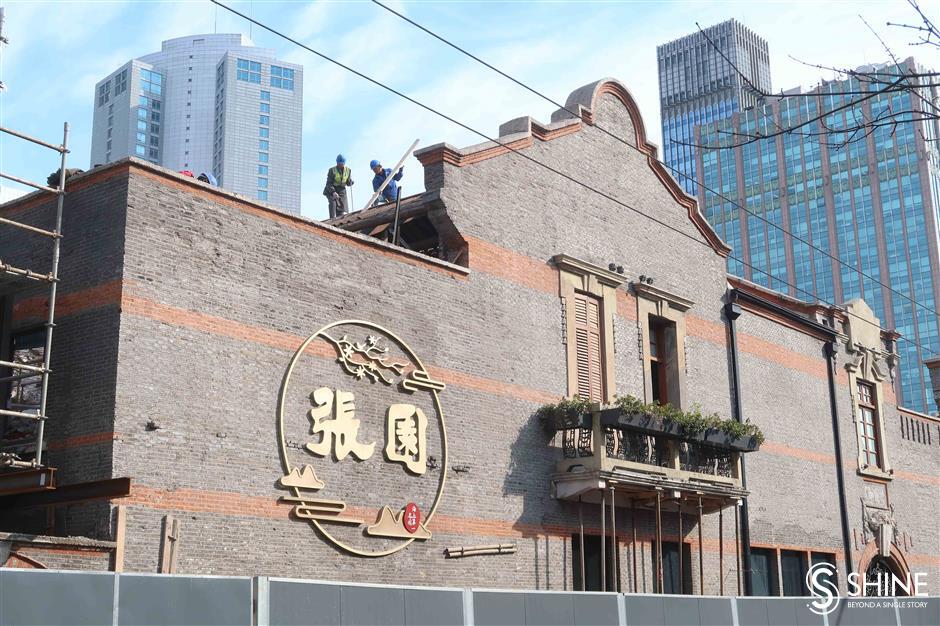 In the city's urban core, the juxtaposition of newly landscaped zone and old, traditional communities encourages the city to embrace urban renovation conducted in light of the principle of "organic renewal."

Witnessing the vicissitudes of the times is Zhangyuan Garden. Built in 1882, it is in need of protective renovation after exposure to the forces of nature for a century. 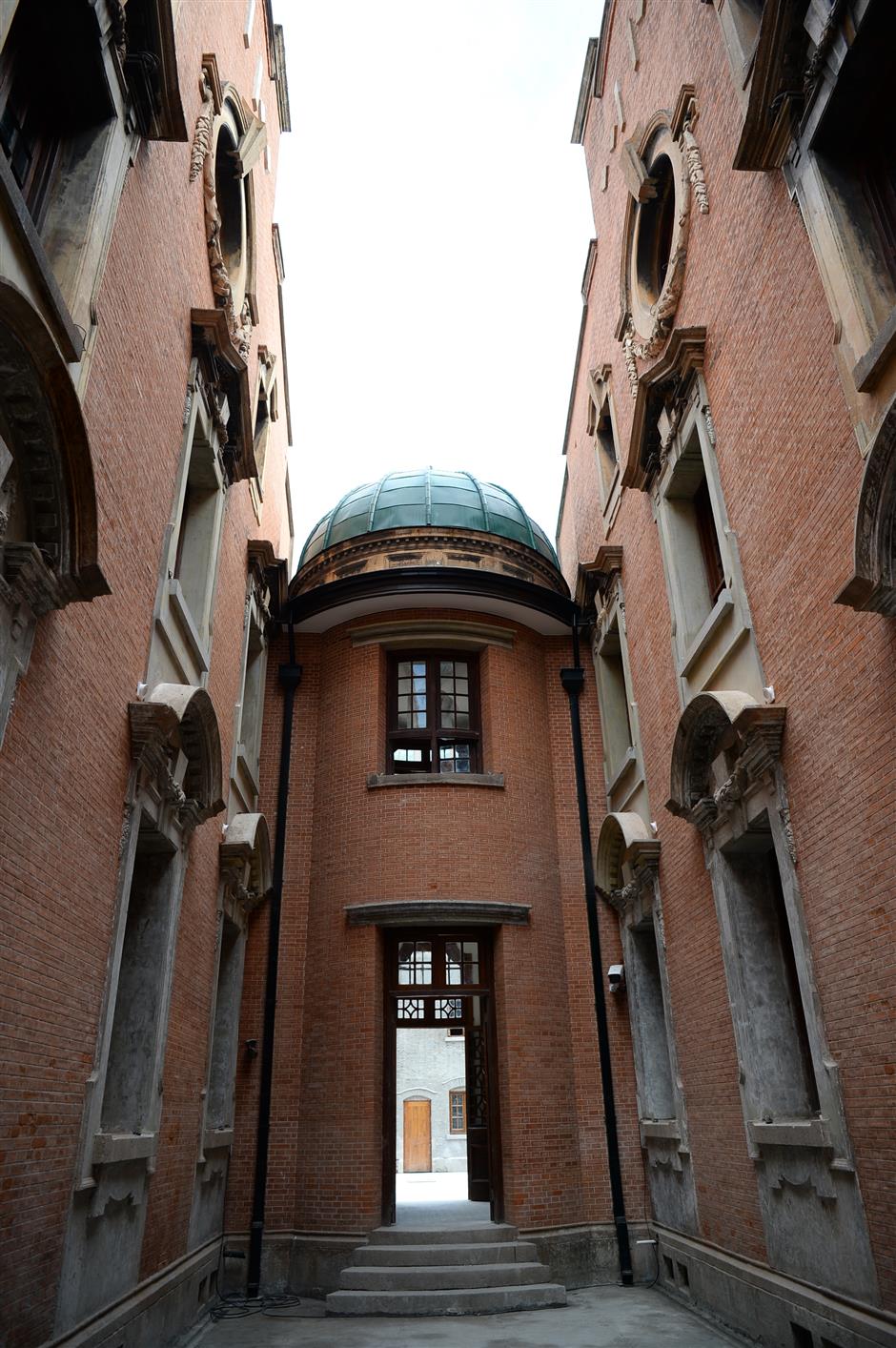 In this unprecedented protective renovation that began in 2018, residents have been relocated to new, well-equipped apartment buildings elsewhere, while the old buildings they have left behind will be restored.

In late September, the western part of the complex, reincarnated as a new set of commercial entities, will open to trend-setting consumers. A number of global brands have set up shop here.

The northern part will be home to cultural centers and galleries, while the southern wing will be dedicated to fashion and performing arts.

When completed in 2026, the one-time garden par excellence will enjoy a new lease on life. 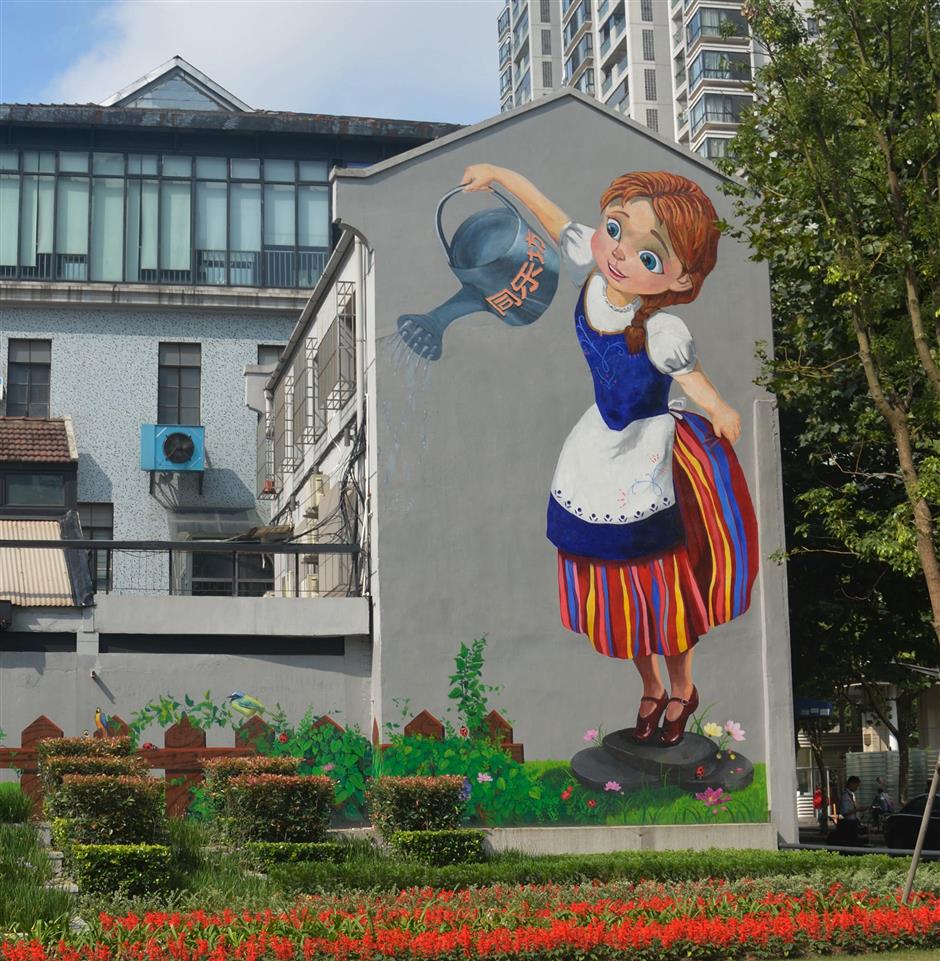 With many former factories undergoing renovations, Jing'an's industrial legacy could also enjoy a new lease on life. An example is Tongle Fang.

Early in the 20th century, this area was a congregation of small factories, theaters and schools, which have turned into venues for creative designs, avant-garde galleries and outlets for fashion and food.

It also serves to educate residents about the city's past role in industries and in revolution. The theme this month is the story of food processing factories and old, time-honored brands.

This exhibition, by tracing the history of these brands, shows the vicissitudes these national brands have experienced over the years.

In the future, there will be festivals showcasing food from Germany, Mexico, South America and Italy, a solo art exhibition by James Jean and a jazz performance. 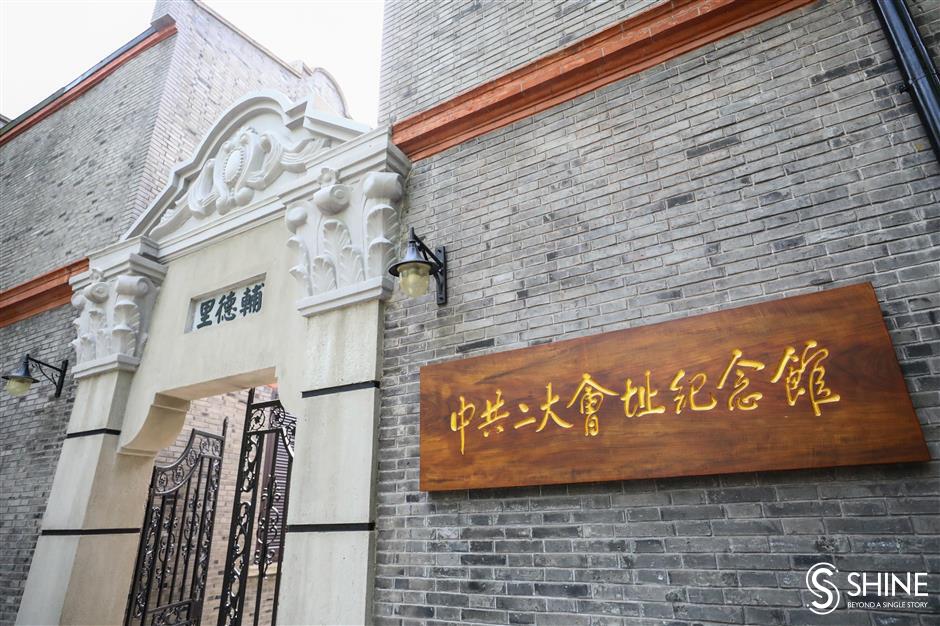 While Shanghai was the birthplace of the Communist Party of China, Jing'an happened to be a central area where the CPC was active in its earlier stages, whose footprint includes the venue of the Second National Congress of the CPC.

A number of activities will mark the centenary of the Second National Congress of the CPC this year.

The congress was held July 16-23, 1922, which came up with the first Party constitution, the CPC manifesto and the decision to join the Comintern.

The memorial is housed in a shikumen (stone-gate) complex built in 1915 and has undergone multiple renovations since 1999.

This year, more red venues will be consecrated, among which is a memorial for the CPC Central Committee Secretariat. 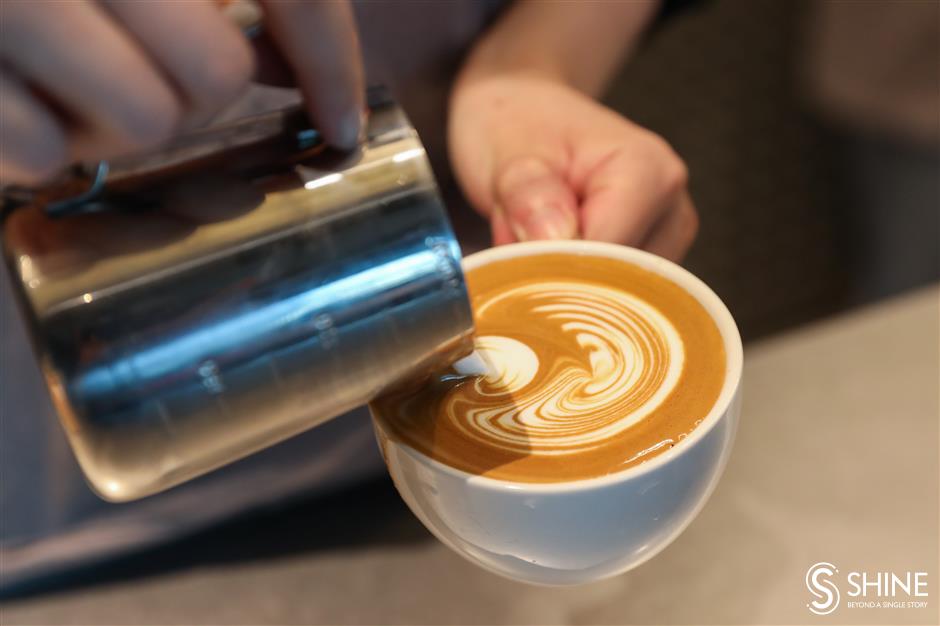 As a sign of soft power in Jing'an and Shanghai, cafes in the city already number 8,000, more than any other city in the world. In the district's Nanjing Road W. neighborhood, there are on average 57.9 cafes in every square kilometer, with one of the most visible being Starbucks Reserve Roastery.

Within the roastery you can witness the entire coffee-making process, a veritable "symphony of coffee beans," in the words of one employee there.

This showcasing of the brewing process in the shop is unprecedented and proven to be a considerable challenge for the wisdom of the regulatory.

The superior business environment is attracting more brands, including Blue Bottle, the leader of the pack in terms of quality.

Blue Bottle opened its first shop by Suzhou Creek on February 25 and the second in the Jing'an Kerry Center on August 5.

Jing'an is one of the fastest graying districts where over 40 percent of residents are over 60. As such, the district has been exploring new schemes for elderly care. Here there are model, family-based elderly care facilities wedded to smart technology.

Never mind about keys – all that is needed to open a door is one's fingerprint, and you will be alerted promptly if you forget to lock the door. Automatically controlled lighting, collapsible chairs and ubiquitous handrails make as much economical use of the space as possible and make everything easier and safer for the elderly.

All kitchens and bathrooms have been adapted for elderly occupants with safety guaranteed by smart devices, and the elderly can ask for help in the event of an emergency.

Bedrooms and drawing rooms, equipped with sensors and robots, are also smart. In the event of an accidental fall, someone will be alerted immediately. 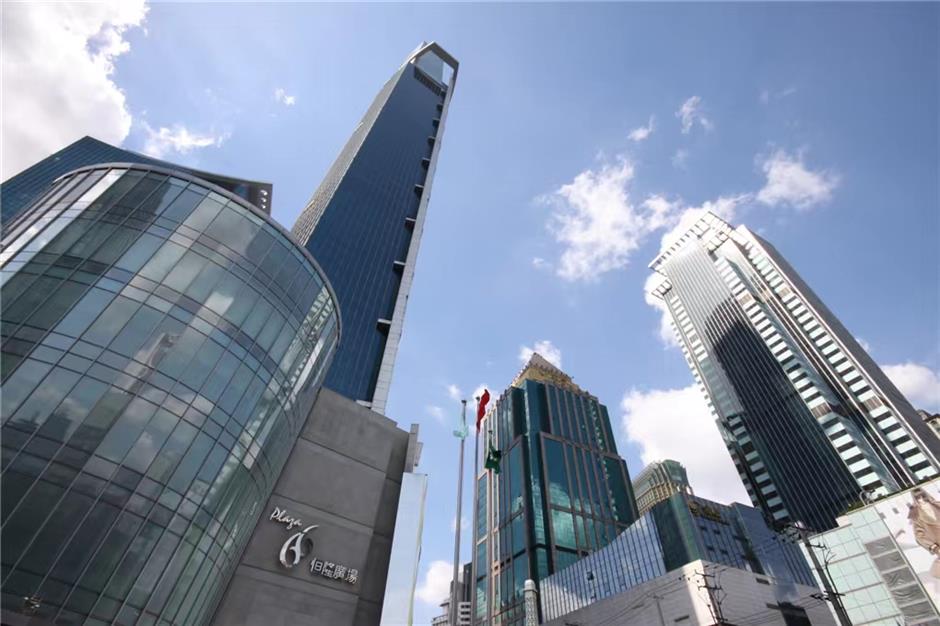 Along with the launch of these committees is the spreading of the Party organization throughout commercial property supply chains.

These properties also play an active role in improving community governance in the form of sponsoring wide-ranging volunteer events that benefit the community. 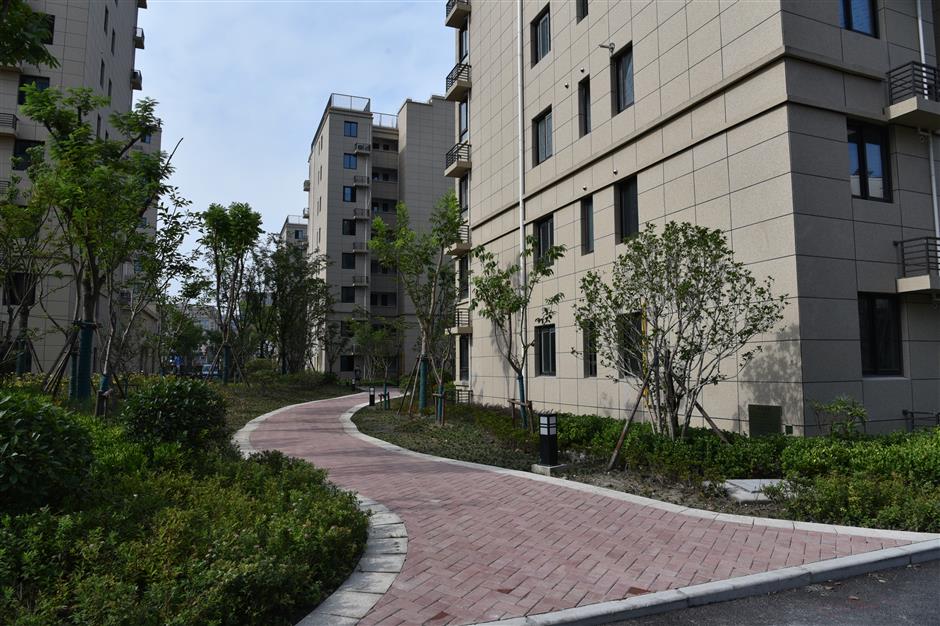 Pengpu Xincun neighborhood was one of the earliest flats for workers in Shanghai, but its facilities could no longer keep up with the times.

Since March 2005, the community started exploring new ways to renovate old neighborhoods. So far almost 5,000 households have benefited from this effort.

On July 21, when some old residents, after being put up temporarily elsewhere for three years, returned to their former homes in a compound in the new neighborhood, they found newly installed elevators, balconies, independent kitchens and toilets, and other amenities.

An even more extensive compound in the neighborhood is in the midst of ongoing renovations, providing flats for more than 2,000 households in the coming years.