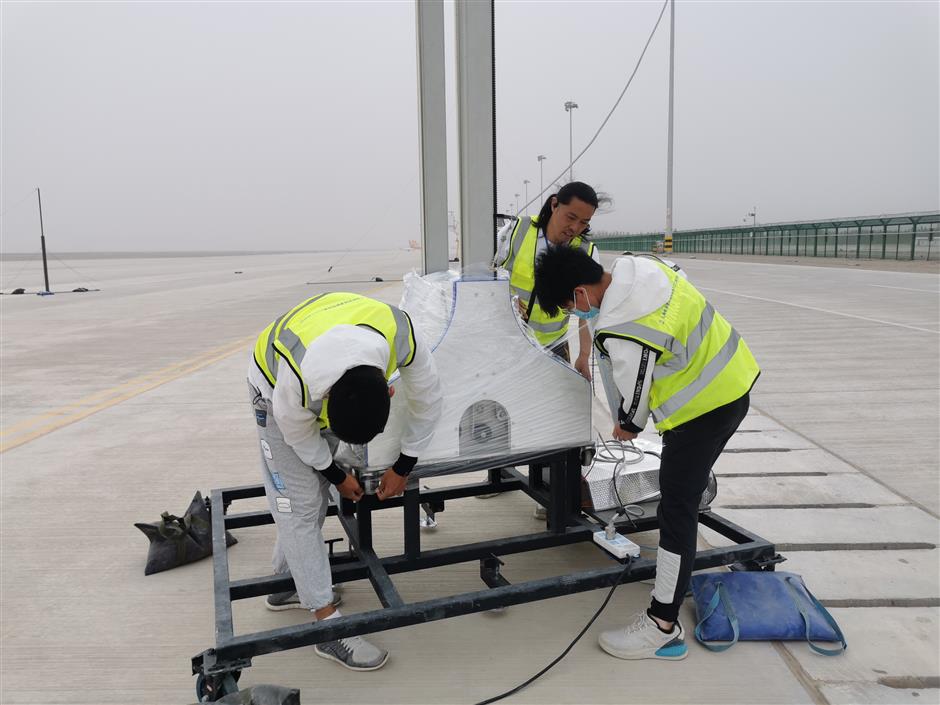 Engineers from the No. 802 Institute set up test facility in preparation for HIRF airworthiness test.

The design power of Minhang District has made a major contribution to the manufacturing of the C919, China's first domestically developed narrow-body jetliner.

The C919 obtained its type certificate, a milestone step on its journey to market operation, on September 29.

The Chinese Aeronautical Radio Electronics Institute, headquartered in Minhang, produced the cockpit display system and A664 network switch for the C919.

The institute, founded in 1957, is based in the district's Zizhu High-tech Park. It aims to become one of the first-class avionics system suppliers in the world.

The C919 cockpit display system is a key man-machine interaction system as well as the most complicated component of the plane. It requires more than 3 million lines of software codes and its fault rate is lower than 10 to the power of -9.

To ensure successful manufacturing of those components, the electronics institute adopted mature design and management tools while developing a research system and process that cater to civil aircraft avionics.

Electromagnetic radiation, including those from radars, radios and TV stations, is an invisible killer for planes on the wing. An aircraft showing its ability in protecting itself against high intensity radiated fields (HIRF) is a necessary step in gaining airworthiness certificate.

"The HIRF airworthiness test is an essential step for a plane to seek a type certificate. It mainly tests a plane's ability in protecting itself against HIRF," said Shi Guochang, a senior engineer of the No. 802 Institute of China Aerospace Science and Technology Corp.

The No. 802 Institute, also based in Minhang, was responsible for the HIRF airworthiness test for the C919. The institute founded its electromagnetic lab in 2011, and HIRF is one of its research fields.

In 2017, the No. 802 Institute and Commercial Aircraft Corp of China Ltd, the C919 designer, jointly completed the full-aircraft HIRF test for the C919 through six days.

In the next step, the electromagnetic lab of the No. 802 Institute will continue its research on civilian aircraft as well as try a hand at research on utility aircraft and unmanned aerial vehicles.