The routes are linked with the district's landmarks, forming a timeline that shuttles people back to its glorious past.

"Rich in historic relics and cultural heritage, the four routes are building an open-air 'city museum without walls'," said Lu Hanhong, director of the promotions office of the bureau. 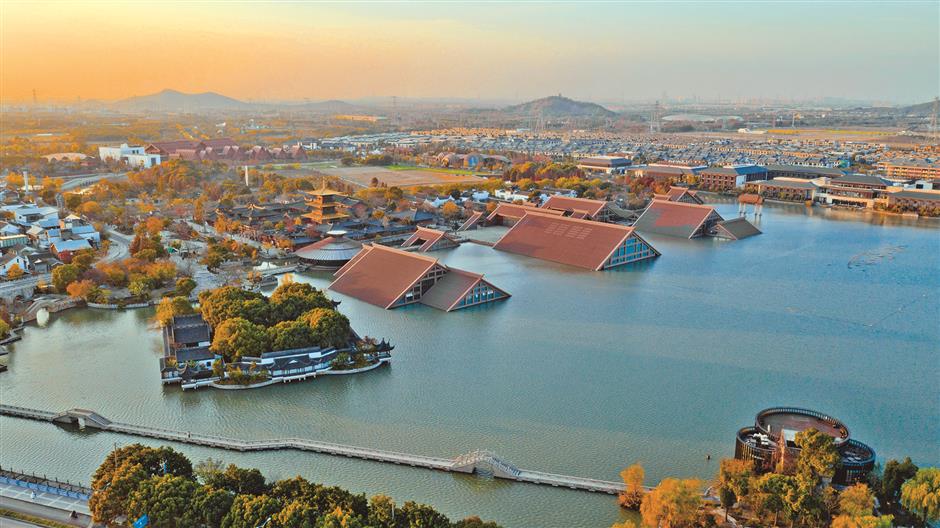 The Guangfulin archeological site retains a large number of precious prehistoric relics that fill the gap in the late Neolithic cultural lineage in the lower reaches of the Yangtze River.

The four-decade excavation unearthed a big volume of pottery vases, spinning wheels, cooking vessels, dishes, as well as sharpened stone weapons and tools used as axes, knives, chisels and shovels. It proves the existence of a culture that thrived some 4,000 years ago.

It also revealed bronze shards, wooden craft items and turtle shells, which were used to foretell the future in ancient China. Two tombs were discovered. One contained the skeleton of a pig, while the other held the remains of a dog.

The Museum of Guangfulin Archeological Remains was built on the original site, where the relics of railings in the Neolithic era were found. Some unearthed antiques during the time are also displayed. The Bone Needle Plaza features a sculpture of a giant bone needle, which was set up to commemorate Songjiang ancestors' tradition of weaving clothes and fishing nets by bone needles.

In the southeast of the sculpture, there stands a stone plow sculpture. The original plow was excavated from the No. 47 trench in the relics site in 2003. Triangular in shape with a thin body and a round head, the plow has its well-polished blade at the waist. It was carved with four holds, three at the head and one near the bottom. Further study finds this plow is larger with a sharper angle than the stone plow unearthed in Liangzhu Culture in Zhejiang Province, which made the plough work more efficiently. 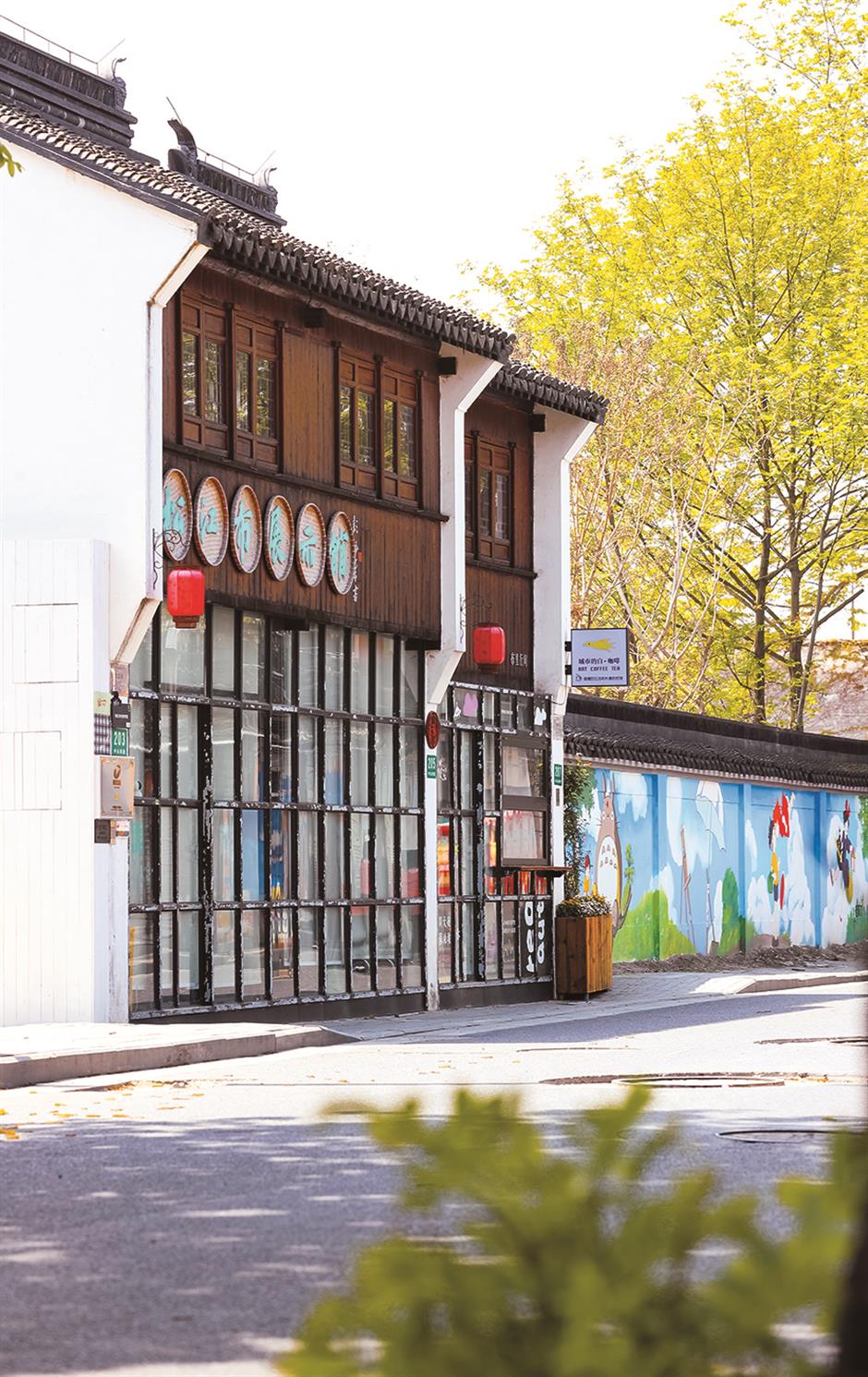 The Watertown in Cangcheng route is a cultural eye-opener with a host of historic architecture that has been protected and restored, becoming a teahouse, bookstore, art space and exhibition hall, displaying Songjiang-native homespun clothes and folk art.

The Old Cancheng Town boasts abundant waterways, reaching its heyday during the Ming Dynasty (1368-1644) as a grain shipping center and storage site for rice from the southern banks of the Yangtze River. The word (仓) means barn. The town's crisscrossing rivers and canals are connected with the sea. Houses, temples, bridges and shops were mushrooming along the canals at the time.

Its protection zone covers almost 80 hectares with a core area of 19.5 hectares, featuring 128 cultural heritage sites which are banned from being relocated, removed or renovated.

Dacang Bridge spans the Shihe River in the old town's eastern tip. The stone bridge, 54 meters long and 8 meters high, has witnessed the twists and turns of the area for almost 400 years. It was once a five-arch building, but became three- arch after two at both sides had been silted up.

After 92 steps to the top of the bridge, visitors can have a panoramic view of the ancient town. The four stone monsters at the top, vividly carved, are glaring to the east and west like the bridge's guardian angels.

Zhang's Rice Store, sitting by the river with a history of over 100 years, was once the busiest place in the town.

In the Qing Dynasty (1644-1911), the Songjiang government (Shanghai in old times) imposed almost 25 million kilograms of grain levies by shipping, and over half of them were stored in Cangcheng. When hundreds of boats loaded with grain set off to the capital, there was a grand ritual to be held at the riverside, thronged with officials, sailors and locals, who expressed wishes for a safe journey for the fleet.

Today the building has reopened as an exhibition hall of Songjiang rice culture. Various old-fashioned rice tools to weigh, grind and cook are on display. Visitors can also roll up their sleeves to beat cooked rice paste to make it more glutinous, and taste the fruits of the hard work. 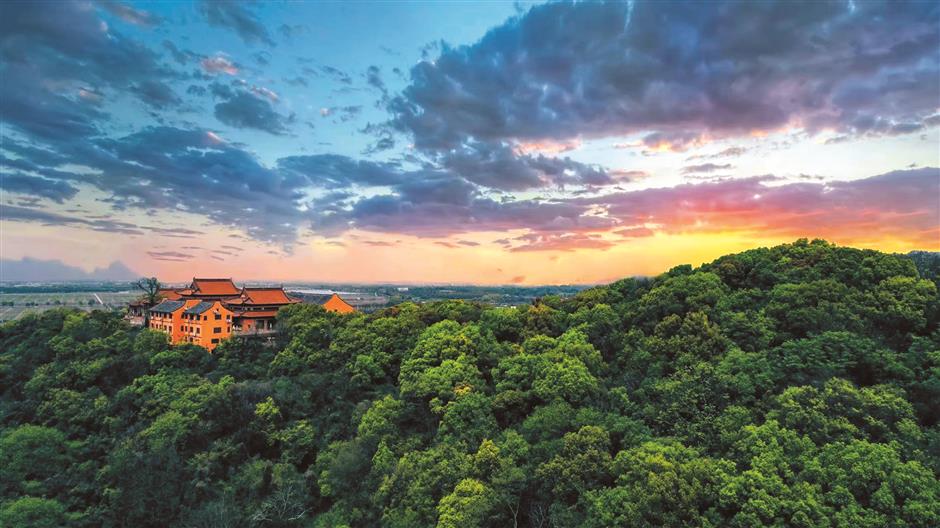 Sheshan Hill with 12 summits, stretches 13 kilometers from the southwest to northeast, adding a unique green mountain scenery to an otherwise flat Shanghai. Its altitude – 100.8 meters on the western peak – is the city's highest point, known as the "Top of Shanghai."

Since days of yore, the hill's many temples and shrines have been a mecca to pious Buddhist disciples, including Jiufeng Temple and Yuanzhijiao Temple. In the backyard of Yuanzhijiao is the centuries-old Huzhu Baoguang Tower that dates back more than 900 years. It slants at a larger angle than the Leaning Tower of Pisa. 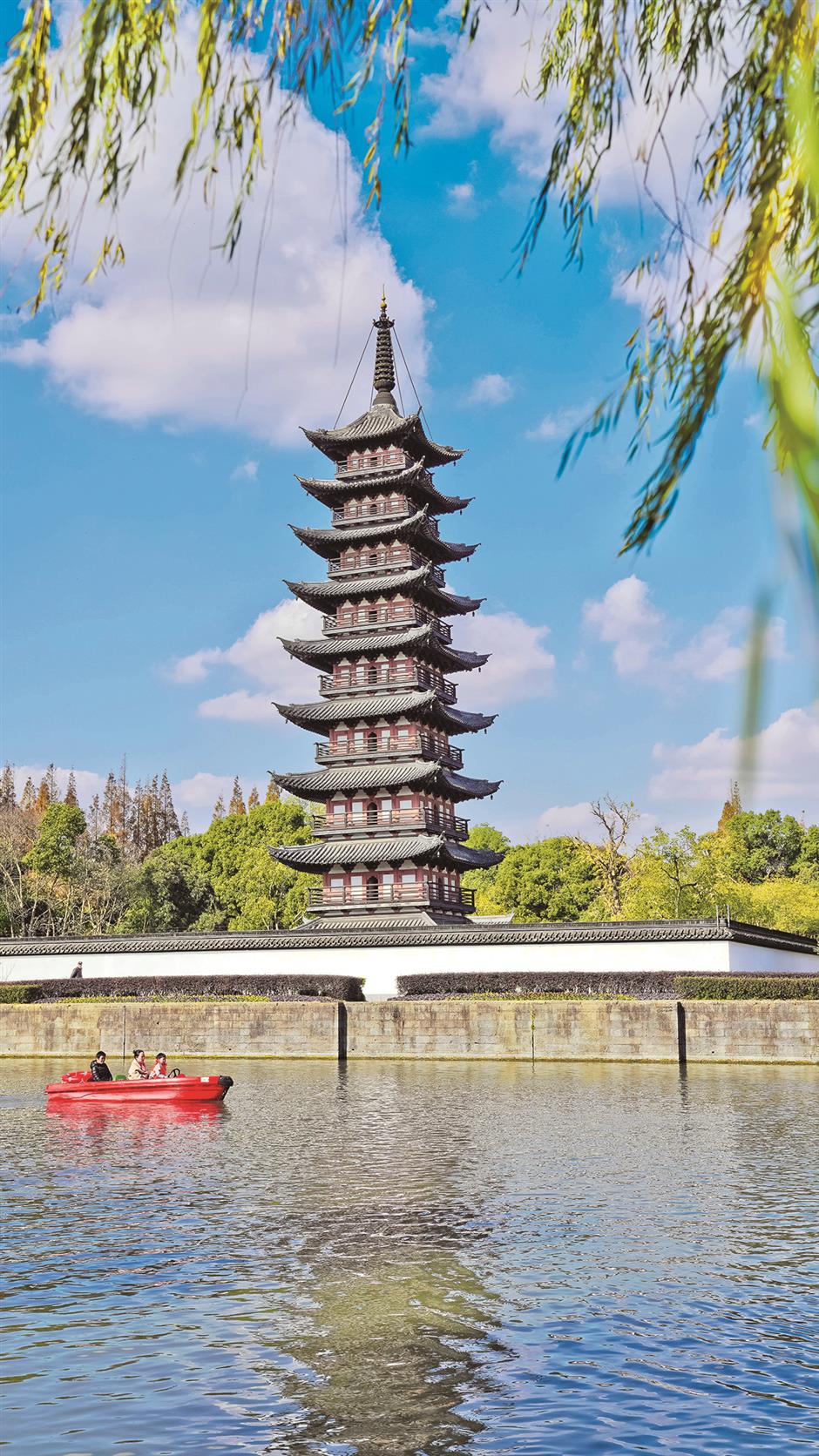 Songjiang started to evolve as an administrative city between AD 742-756, and had its high and firm city wall built between 1127 and 1179. Along this route, the old city's long-gone past is revived.

Fangta Park hosts the namesake Fangta, a rectangular tower built in the Song Dynasty (AD 960-1279), a , or screen wall from the Ming Dynasty (1368-1644), the Tianfei Palace dating back to the Qing Dynasty and centuries-old plants.

The nine-story tower, though constructed during the Song Dynasty, really exemplifies the architecture of the earlier Tang Dynasty, with its grand and imposing style, while the stone screen, 4.75 meters high and 6.1 meters wide, is ornamented with ancient mythological animals and is regarded as the oldest and most intact large brick relief sculpture in Shanghai.

The watchtower, built in the Song Dynasty, was the earliest one in Shanghai, also the highest building before the city opened its port in 1843. Today it's the front gate of the Songjiang No. 2 High School.