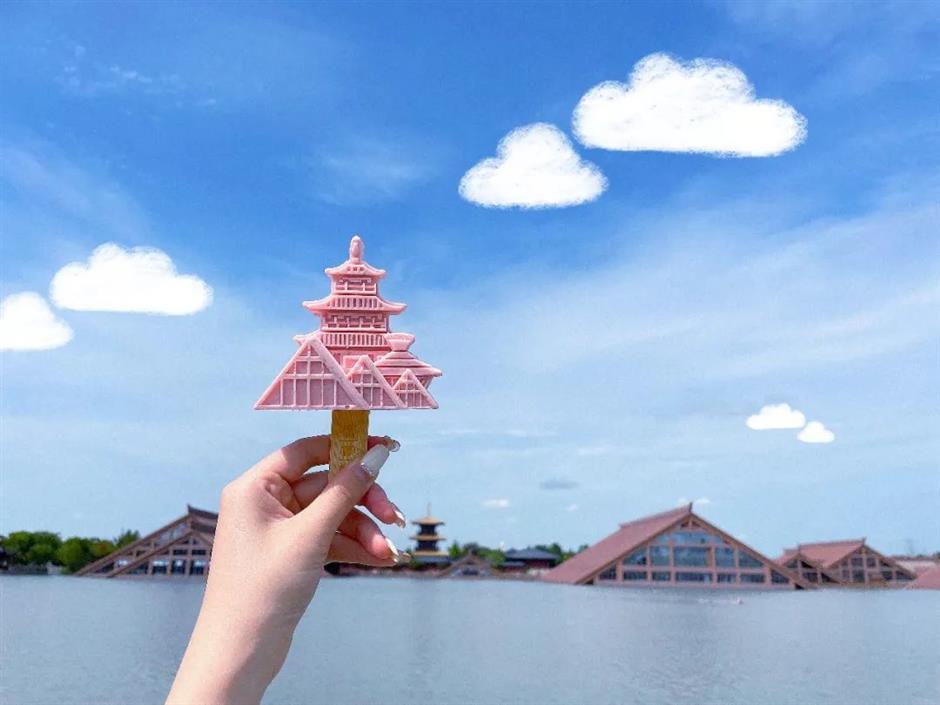 Guangfulin Cultural Relics Park recently launched its home-grown ice cream that might be a tasty attraction for visitors. The ice cream in two flavors, strawberry and vanilla, are shaped like the park's two iconic landmarks – the Guangfulin Culture Exhibition Hall and the Museum of Guangfulin Archeological Remains.

The cultural exhibition hall is constructed under the Fulin Lake with its roof "floating" above the water surface, while the museum in the north of the core archeological protection zone is designed to be a giant pottery shard half-buried in the earth.

The strawberry flavor is a cute version to revive the exhibition hall with the silhouette of the Fulin Tower behind, and the vanilla flavor also portrays the rippling river in front of the museum. The ice creams sell for 26 yuan (US$3.6) each.

Guangfulin zone is an archeology site showing Songjiang District's rich history and culture that thrived some 4,000 years ago.

It was first discovered in 1958 by local farmers dredging a new waterway. In their digging, they found ancient pottery shards. In 1961, archeologists began the first systematic excavation of the site, unearthing a large volume of pottery vases, spinning wheels, cooking vessels and dishes.

Experts also unearthed sharpened stone weapons and tools used as axes, knives, chisels and shovels. Excavation work stretched from 1961 to 2008, when experts found a large number of bronze shards, wooden craft items and turtle shells, which were used to foretell the future in ancient China.

Today the protected area has been developed into a cultural relics park with more than 20 themed museum areas and memorial halls, such as the Museum of Guangfulin Archeological Remains, a memorial hall dedicated to Songjiang poet Chen Zilong (1608-1647) and the Fulin Porcelain Museum.