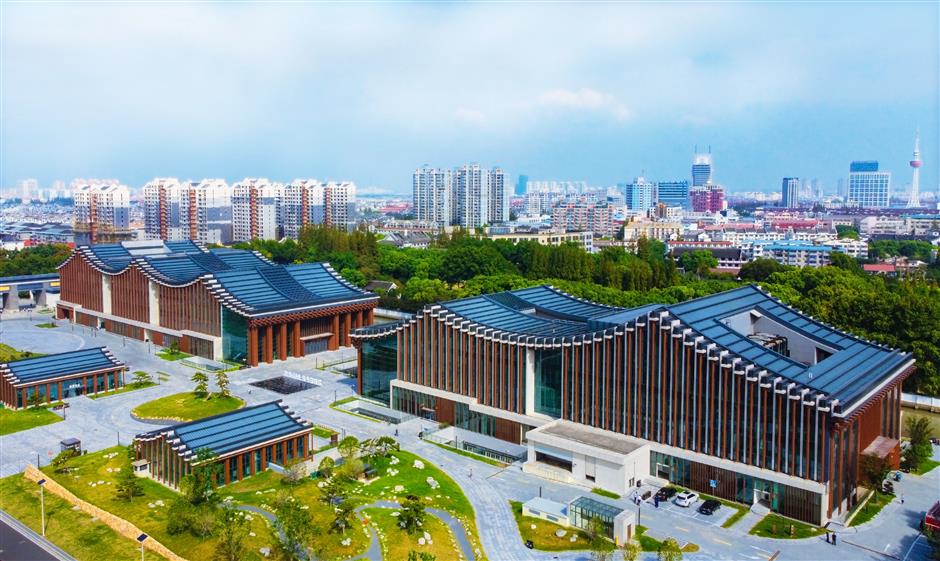 The Yunjian Culture and Art Center

A new cultural landmark in Songjiang District opened to the public recently. The Yunjian Culture and Art Center offers a one-stop cultural experience that includes a library, an art gallery, a theater and boutiques to shop some art pieces.

The four-year project, with an investment of 1 billion yuan (US$139 million), covers an area of 48,000 square meters. It's located just by ancient Zuibai Pond Park, and connected to the Metro Line No. 9.

"It was a barren land before," said a nearby resident Yu Ying, who witnessed the whole construction. "We used to go to the downtown center to watch shows and performances, but now they are at my doorstep."

The architecture is designed to go with the style of Zuibai Pond Park and cleverly borrows the park's beautiful scenes, creating an uninterrupted landscape. The center's roof is constructed to look like a stretch of hills with ups and downs, and also opened books on a second look.

The external facade features vertical lines to express the musicality through tension of lines, geometry and abstraction. The outdoor scenery is inspired by ancient Chinese gardens. The southern square features mounds, decorated with ponds, pine trees and cobble stones, to recreate Songjiang's signature natural sites "nine hills and three rivers," which have been depicted hundreds of times by poets and artists over the centuries.

The theater had its first show in September, 3D musical The Wizard of OZ, composed by both Chinese and American artists.

"It fills the gap in the district, which had no professional comprehensive theater for years," said Zhang Guoqiang, vice director of the Songjiang District Culture and Tourism Bureau. This new theater is the largest one in Shanghai's five new cities, which is open not only to Songjiang locals but also audience from the Yangtze River Delta region.

The theater has been fully scheduled through the next Spring Festival. "In the future, we plan to arrange about 150 performances every year," said Qin Tiji, chairman of the theater's management company.