'Origin of Huangpu River' a top destination for urban day-tippers

The Huangpu River has nurtured Shanghai for centuries. However, few people know that the city's mother river originates in a small village tucked away in Shihudang Town, in the south of Songjiang District.

The "Origin of Huangpu River" is now open to the public with the launch of a green train model at the entrance, becoming a tourist destination for urban day-trippers.

Driving along Minta Road to the west and turning onto a country road, one will marvel at the scene that unfolds ahead – open water suddenly emerges from the horizon, glinting in the sun.

The Yuanxiejing and Xietangjiang rivers from Jiangsu and Zhejiang provinces merge first, run to meet Hengliaojing River in the east, and then converge to become the "Origin of Huangpu River" with a giant rock carved with a large red number zero to mark the starting point.

A lighthouse stands at the rivers' intersection, aiding navigation of the three channels from Shanghai to Suzhou in Jiangsu, and Hangzhou and Huzhou in Zhejiang.

Dongxia Village, the point of origin, was a busy trading hub in ancient China, joined by various waterways with the Huangpu River the largest.

The river, about 113 kilometers long, formed in 1522, running from Songjiang through 11 districts in Shanghai into the Yangtze River at Wusong, Baoshan District. Over the centuries, the Huangpu cradled Shanghai's agriculture, irrigating the soil, providing fishing, carrying off effluents, discharging floodwaters, serving as the city's main shipping route and providing drinking water.

There is a small park commemorating the river's origin, featuring stone bridges, kiosks and green plants. Chunshen Hall, in the architectural style of the Tang Dynasty (AD 618-907), is the exhibition center, which displays the river's history and development. 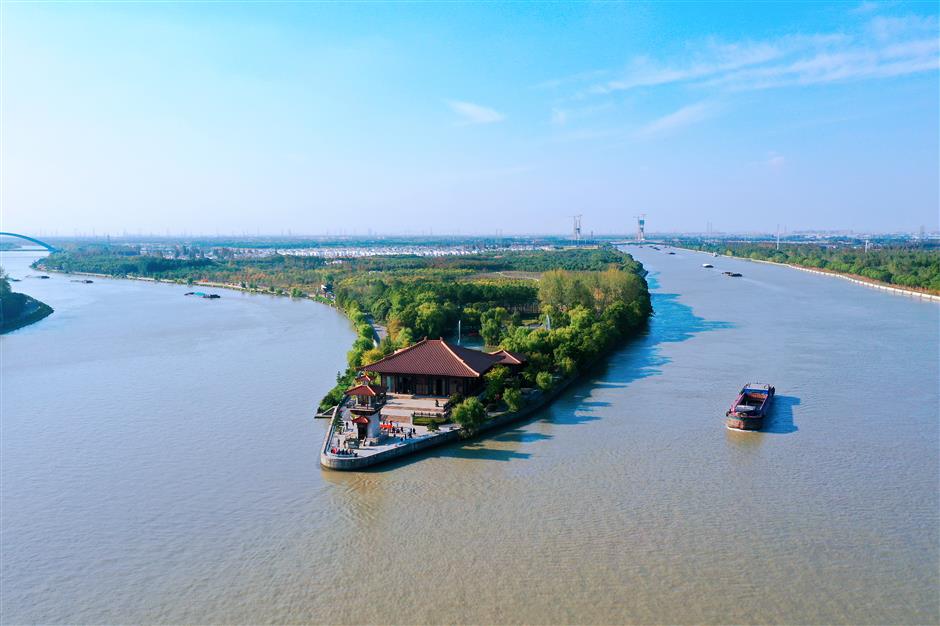 The hall, safeguarded by two stone lions from the Ming Dynasty (1368-1644), is also a shrine to remember Chunshen Governor Huang Xie (314-238 BC), who managed the fief throughout Wuyue (today's Yangtze River Delta region).

Legend has it that Huang led his men to control water and prevent floods in Songjiang during his reign. He dredged a channel that started from Taihu Lake in Jiangsu, past old Jiaxing, Fengjing and Songjiang cities, and ran to the South River that met the sea in the south. People later renamed the South River the Huangpu or Chunshen River to remember the king, and his fief Shanghai is also called "Shen" today.

A total of 12 wooden carving sculptures in the hall revives the crucial moments of Shanghai's growth along the river banks, while "the Chunshen River Taming Picture" and "Huangpu River System Illustration" offer people a historic and geographic view of the water.

The Water Culture Museum designed underwater is also worth a visit.

A few steps from the hall by the river is the tower of the Dragon King, God of Water in Chinese mythology, who is said to have the power to harness floods. Locals built the temple and enshrined a golden dragon king statue, praying for safe voyage each time they set out fishing.